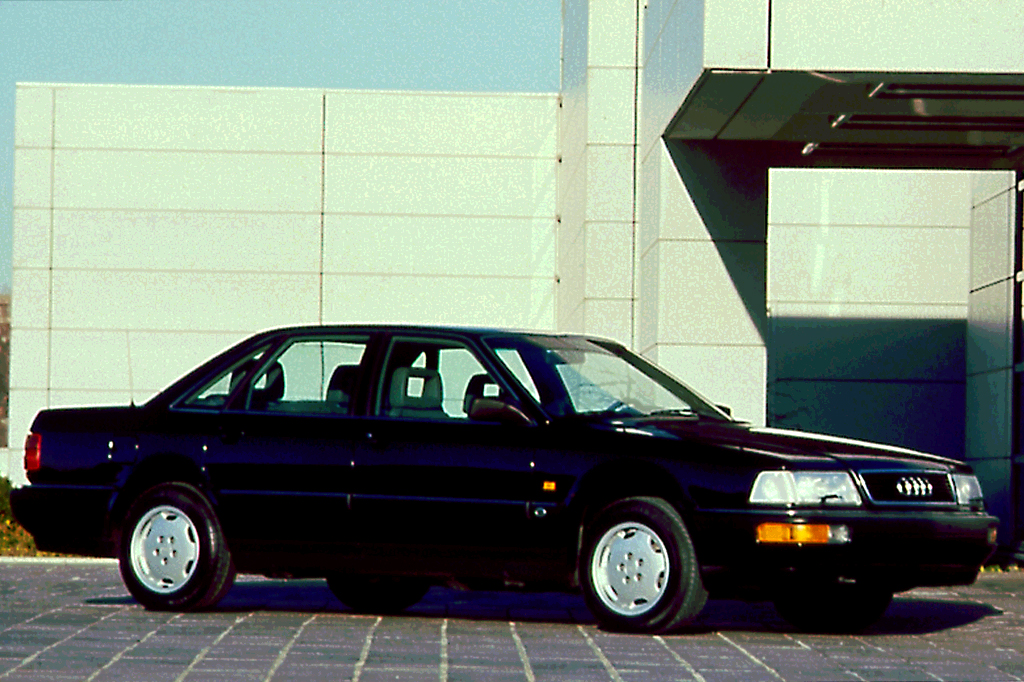 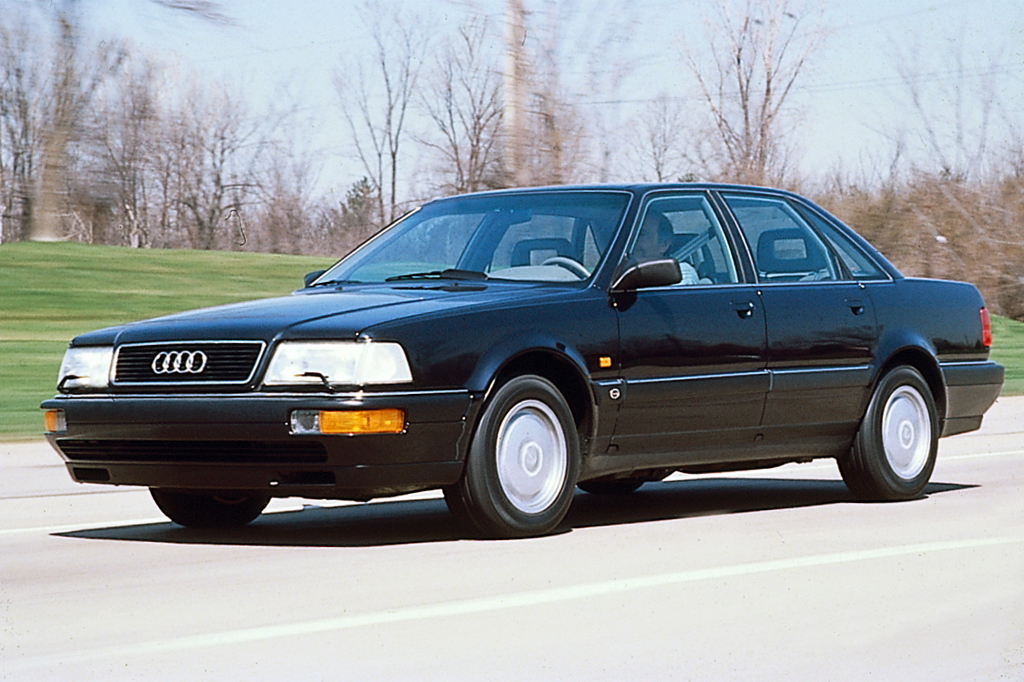 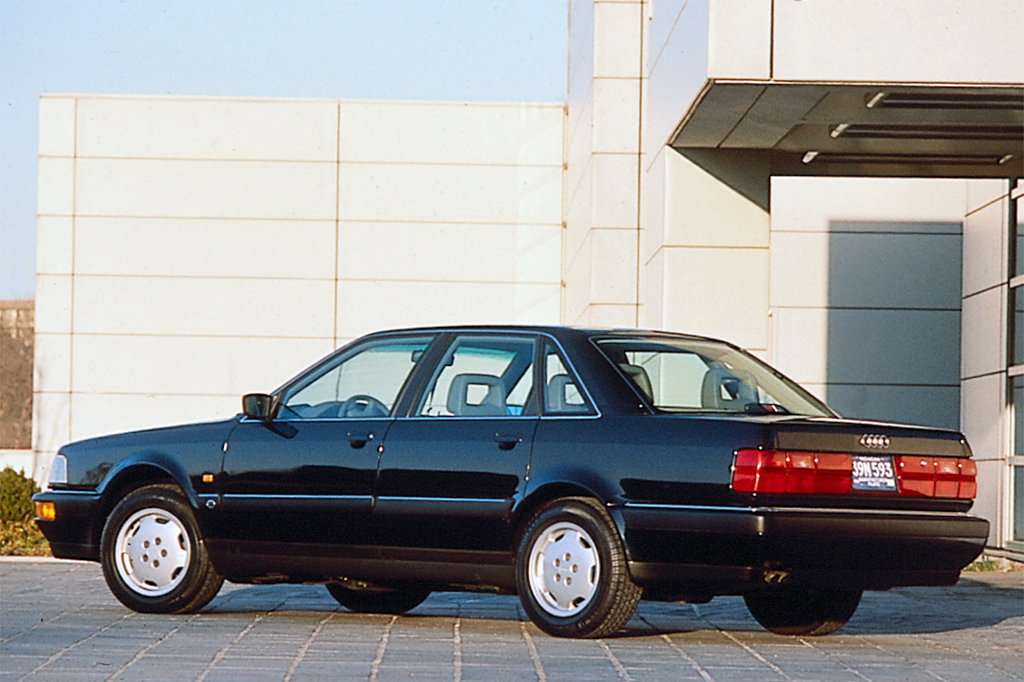 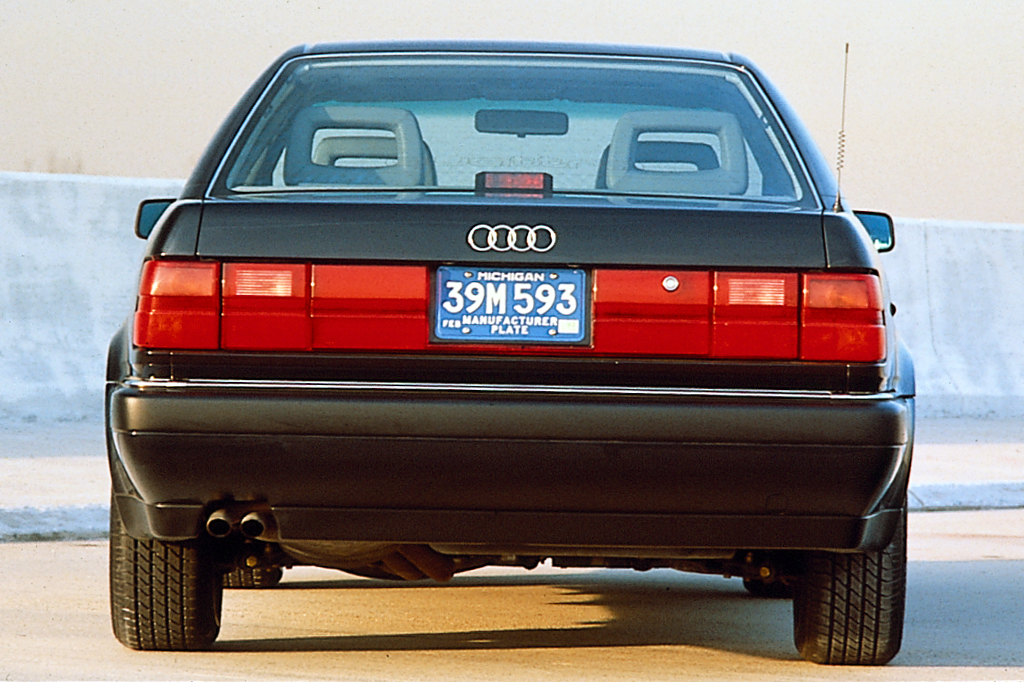 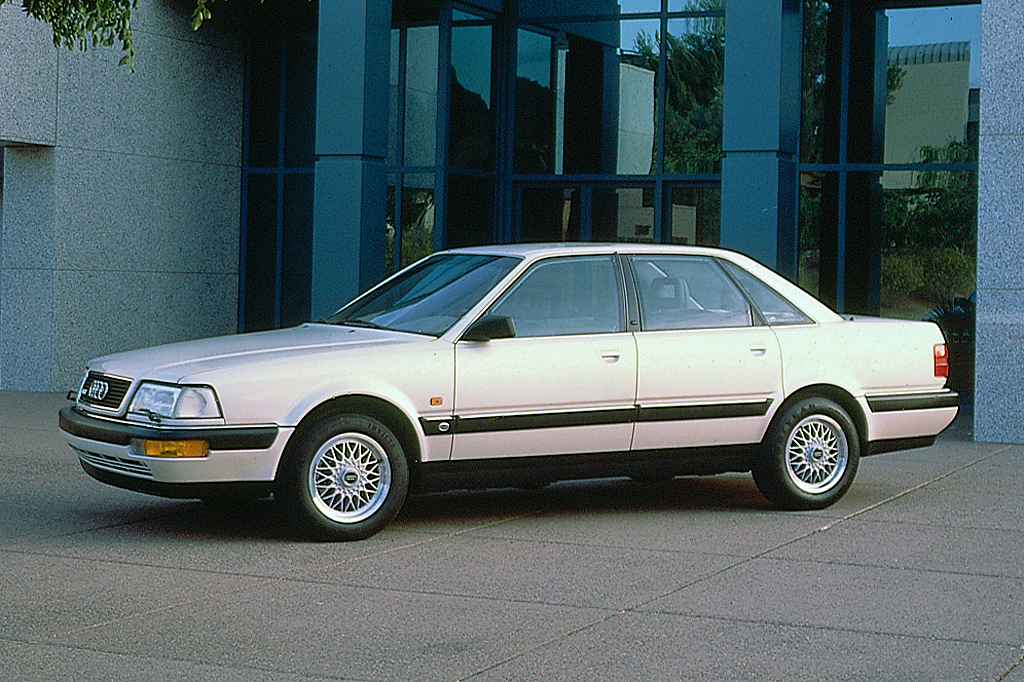 Fast and powerful with the 1992-94 engine, at least, the V8 Quattro boasted nearly every modern safety and comfort feature for its day. What this sedan lacked was an appeal wide enough to generate substantial sales. Prices remain strong even today, but a V8 Quattro can yield a satisfying–if nonfrugal–highway experience.

On sale in July 1989, Audi’s new high-performance luxury “flagship” sedan challenged such logical rivals as BMW, Mercedes-Benz, and Jaguar. Exterior styling resembled Audi’s 100/200 series, but only the front and front doors were shared with those models.

Priced at a hefty $47,450, the V8 Quattro held a 240-horsepower, 3.6-liter aluminum V8 engine with dual overhead camshafts and four valves per cylinder. Power went through a 4-speed overdrive automatic transmission to a permanently engaged all-wheel-drive (AWD) system. Normally, engine output was split 50/50 between front and rear axles. When wheel slippage was detected, extra power would be sent to the axle with the greatest amount of traction, giving the best possible chance of getting underway properly. In extreme situations, all the power could temporarily go to either the front or rear, wherever it was most needed.

This was the first Audi Quattro model with an automatic transmission, fitted with three modes: E for higher fuel economy; S for sportier performance; and M for manual operation. An automatic shift lock required that the brake pedal be applied to shift into a drive gear. Standard features included a driver’s airbag, antilock brakes, 2-sided galvanized steel body panels, leather upholstery, a Bose sound system, and a cellular phone.

Offering every available safety and convenience feature, the V8 Quattro is one impressive automotive achievement–but it’s clearly not a car for everyone, even where money is no object. Even those who can afford a car of this caliber might find Audi’s flagship to be more in tune with the German Autobahnen than with American interstate highways.

The combination of firm suspension and wide Z-rated tires give it commendable–even amazing–stability at high speeds, but also makes the ride harsh and noisy on rough roads and patched pavement. Tires also generate considerable noise, which can get tiresome on long drives. Steering, on the other hand, is precise and responsive.

Audi’s initial dual-cam V8 engine delivers strong, prompt passing response on the highway, but lacks brisk off-the-line acceleration–especially in “economy” mode. Around town response might be better in “sport” mode, but in our test of an early model, the transmission reverted to “economy” every time the engine was started. Highway fuel mileage is disappointing, whatever the mode. The stronger V8 for 1992-94 will be appreciated when trying to move this 2-tonner away from a stoplight.

Among this sedan’s impressive attributes is outstanding traction. Audi’s sophisticated all-wheel-drive system is a wet-weather ally that sets the V8 Quattro apart from other high-priced luxury sedans of the early ’90s.

Fuel economy is poor. We averaged 17.2 mpg overall with an early model, reaching a high of 21.8 mpg on the highway. When new, the V8 Quattro’s price included a stiff federal gas-guzzler tax, as well as a luxury tax.

Four adults have plenty of space in a well-designed interior. The large trunk has a low liftover height.

Though the V8 Quattro is impressive in many ways, and makes a fine road car, most Americans will probably find models such as the Lexus LS 400, Infiniti Q45, and Cadillac Seville much better suited to their driving tastes.