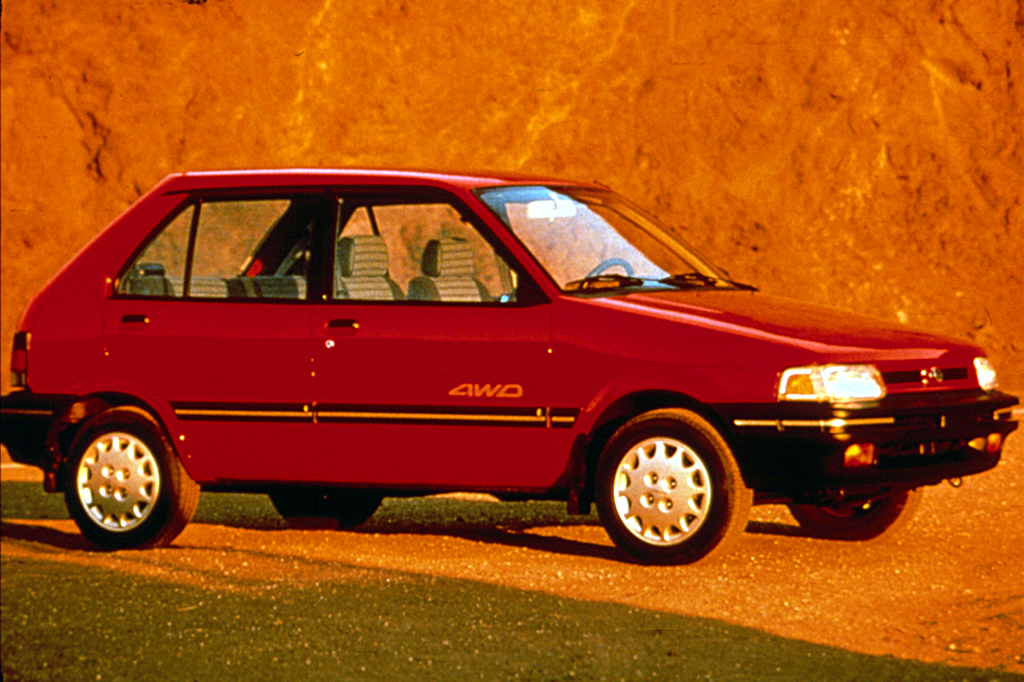 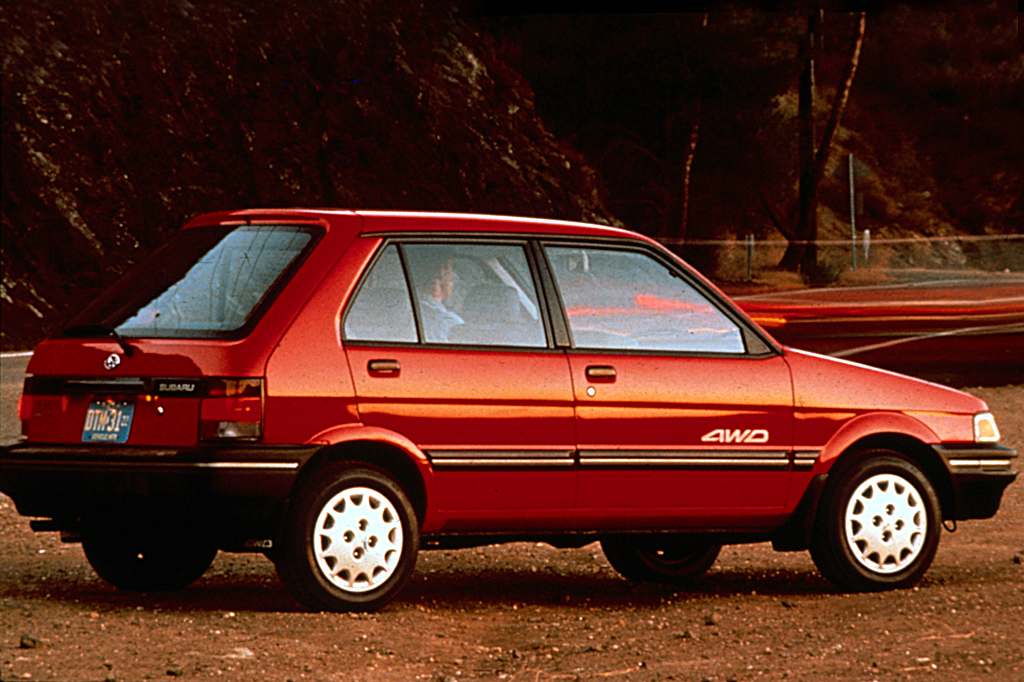 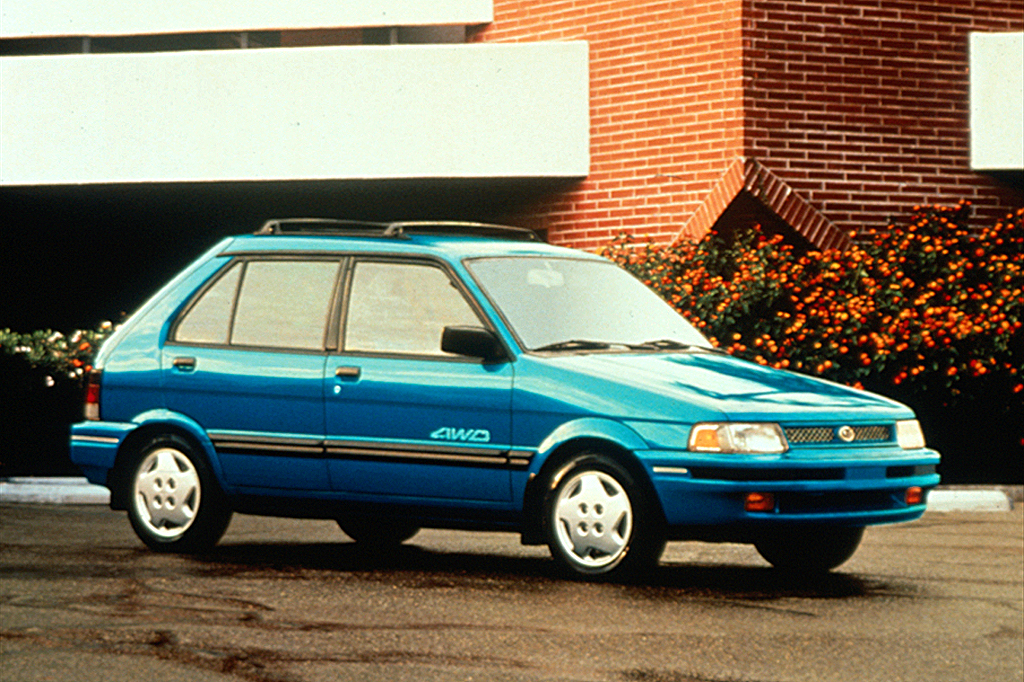 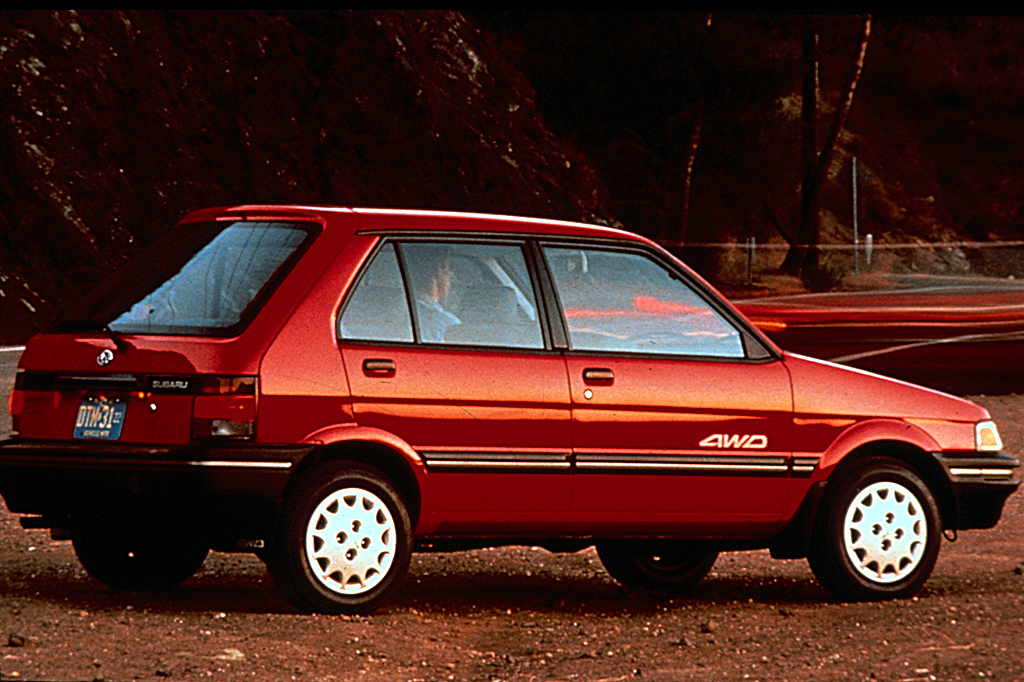 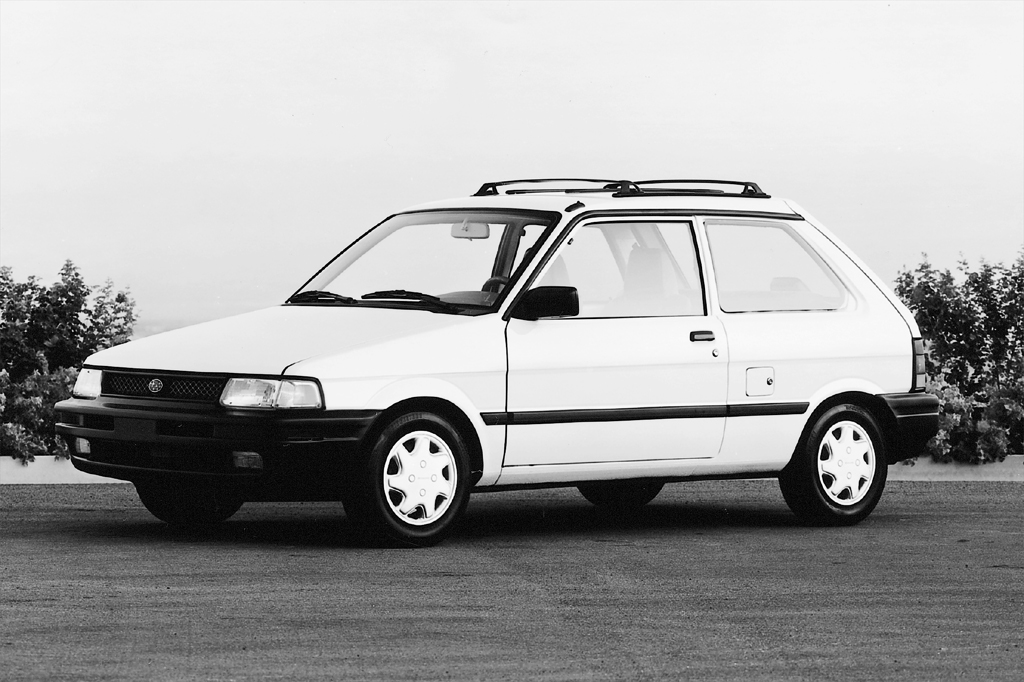 Apart from the ECVT unit, Justy is typical of low-priced minicompacts in most categories. With the exception of the 4WD GL, for a combination of low price and high fuel economy, other models would probably be more suitable, including the Ford Festiva and its 1994 Aspire replacement.

Through its lifespan, Subaru’s minicompact was perhaps best known for its available electronically controlled variable-transmission. Dubbed ECVT, it offered an infinite spread of gear ratios. Although the basic idea had surfaced decades earlier, and was used on the Dutch-built DAF in the 1960s, Subaru was unique for offering it in the U.S. market at this time.

Introduced in early 1987, the Justy initially came only as a 2-door hatchback. A 4-door hatchback joined for 1990, on the same 90-inch wheelbase. Both came with either front-wheel drive or on-demand 4-wheel drive.

All models except the base Justy got a 73-horsepower fuel-injected engine for 1990, instead of the carbureted 66-horsepower 3-cylinder. Fuel-injected models got a new intermediate front driveshaft to help reduce “torque steer.” A new “Fun Justy” appearance package was introduced for the 2-door model.

Having debuted in 1989, the ECVT unit was now available on 4WD models as well as those with front-drive. With ECVT, a metal belt connects two pulleys that continuously vary the ratio of engine speed to driveshaft speed. Operation can be described as similar to a dimmer switch, as opposed to a 3-way light switch. Justy also was available with an ordinary 5-speed manual transmission.

Until 1993, base Justy hatchbacks used a carbureted 1.2-liter 3-cylinder engine, rated at 66 horsepower. Other models, and the base Justy in 1993-94, got a fuel-injected version of the 1.2-liter 3-cylinder, which developed 73 horsepower. A 5-speed manual transmission was standard, but Subaru’s innovative electronically controlled variable-ratio transmission (ECVT) was available until 1994.

Justy stood apart from other diminutive imports by offering 4-wheel drive and ECVT. Its fuel-injected engine also earned plaudits for efficiency, being one of the few naturally aspirated powerplants to eke out one horsepower per cubic inch of displacement. And, in fact, the engine is quite lively when teamed with a conventional 5-speed manual transmission.

The unique ECVT transmission manages to get more performance out of the Justy’s 3-cylinder engine than a conventional automatic ever could. It’s nearly as good as a 5-speed in acceleration. Even so, there’s little zip in the 25-50 mph range. The variable-ratio transmission responds readily, but lacks sufficient torque for quick, safe passing on flat surfaces. When heading uphill, the ECVT Justy loses its momentum rather rapidly.

Though easier to drive than a stick-shift in stop-and-go congestion, ECVT can be frustrating on freeways because the engine lags far enough behind the driver’s throttle foot, so you can’t move as quickly as the traffic flow.

EPA mileage ratings are impressive with either transmission. We averaged nearly 30 mpg with ECVT in a mix of city and highway driving, but the 5-speed Justy did better.

Like other minicompacts, such as the Geo Metro and Suzuki Swift, the Justy is noisy, suffers from a bouncy ride, and has a cramped back seat. Its biggest advantage over rivals is the standard 4-wheel-drive system on the GL model, which made it one of the lowest-priced, most economical 4WD vehicles on the market. If 4-wheel-drive is a priority, few other low-cost choices exist.