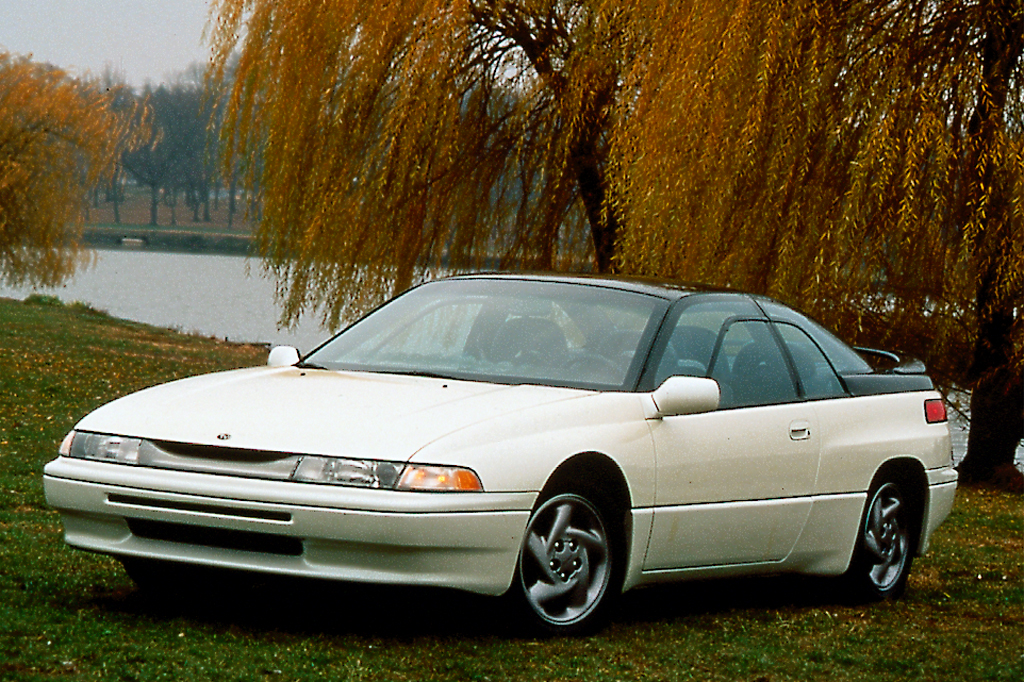 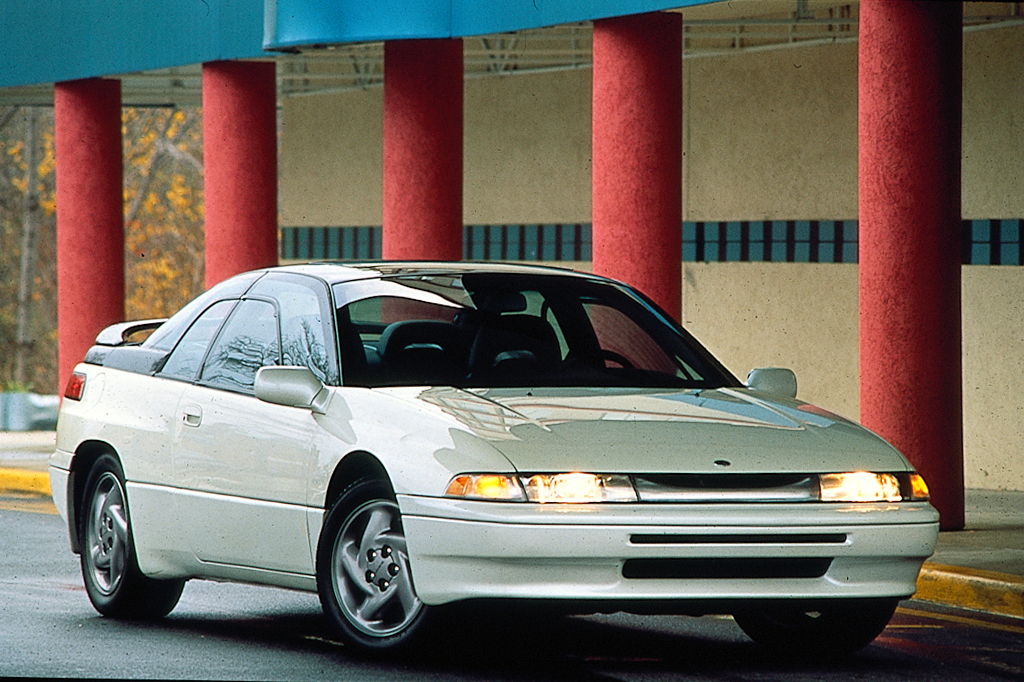 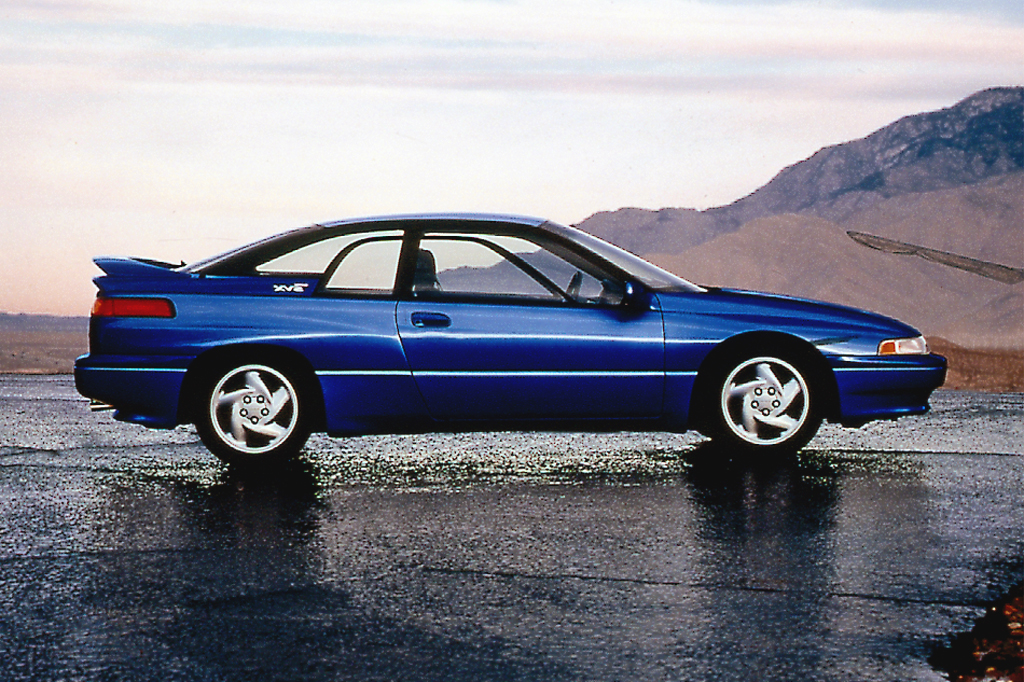 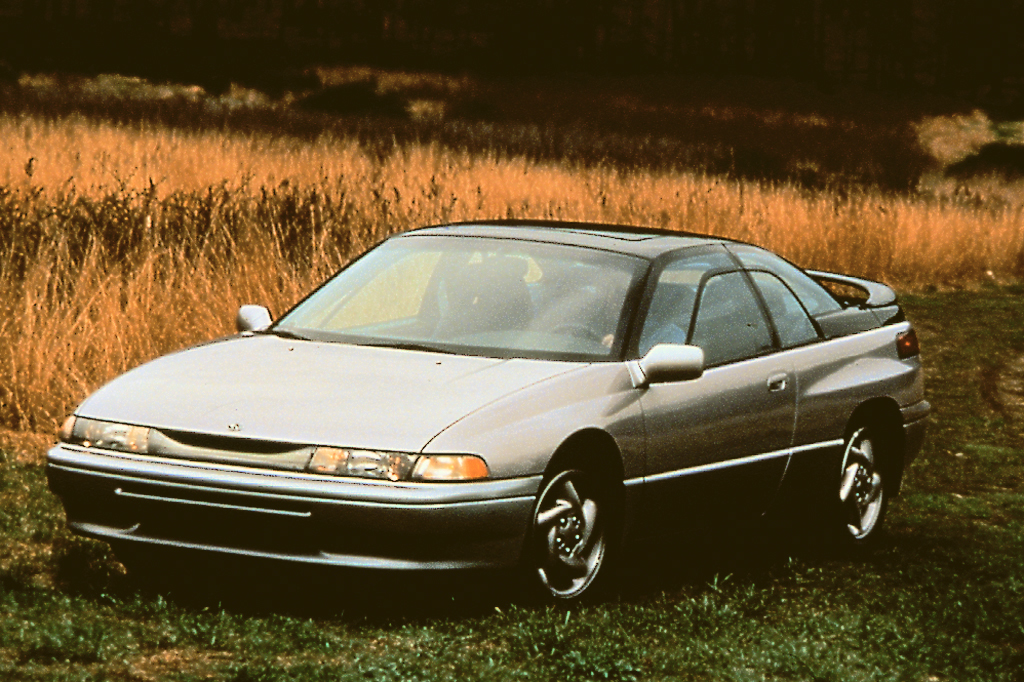 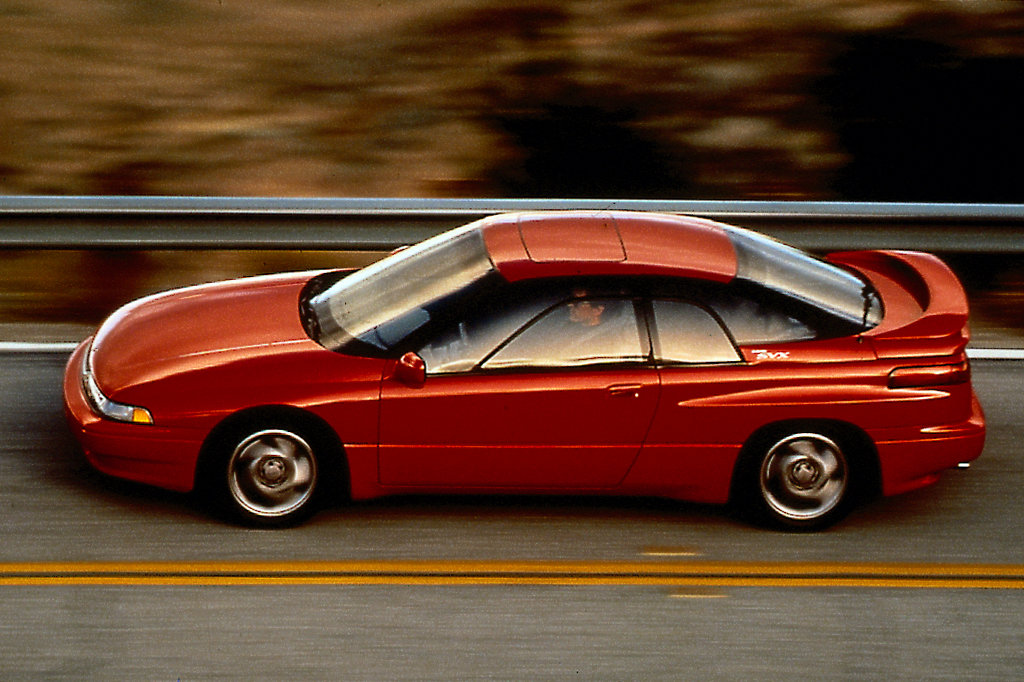 Unique in design, the SVX never caught on in the sales race. Not in the same performance league as the Dodge Stealth R/T Turbo/Mitsubishi 3000GT VR-4, which also have all-wheel drive, SVX is the only one in that spirited group that came with an automatic transmission.

Subaru broke new ground for 1992, releasing the sleek, high-performance SVX luxury coupe as a replacement for its wedge-shaped XT6. Compared to the front- and 4-wheel-drive XT sports coupes, the SVX measured four inches longer in wheelbase and also in overall length.

SVX quickly became known for one distinctive feature: its “window-within-a-window” design. Most of the side glass was fixed in place, and only the unusual little window, mounted within the bigger pane, rolled up and down.

All SVX coupes used the same engine: a horizontally opposed, 3.3-liter 6-cylinder that developed 230 horsepower. A 4-speed automatic was the sole transmission. Front-drive SVX coupes were available in 1994-95, but in other years all the coupes had permanently engaged 4-wheel drive.

When it debuted for 1992, the SVX had little direct competition in its price segment of the performance/luxury-coupe market. Few rivals in this class offered 6-cylinder power combined with 4-wheel drive.

Somewhat eccentric in appearance, an SVX is extremely competent on the road. All-wheel-drive traction gives it fine grip in turns, even when the pavement turns wet.

The firm suspension works with the tires to furnish excellent cornering grip, without a trace of harshness. Riding flat over dips, without jarring through bumps. the SVX remains well-balanced in directional changes. Electronic speed-variable power steering, offered in the Touring Package, is a desirable addition. Most early models had that package.

Acceleration is robust with liberal application of the throttle. The horizontally opposed engine pulls the coupe strongly from virtually any speed, unleashing plenty of power for passing. We’ve accelerated an SVX to 60 mph in 8.4 seconds. Subaru’s automatic transmission generally shifts well, but occasionally winds up in too high a gear to provide a small speed increase without downshifting.

Gas mileage wins no prizes. We averaged close to 25 mpg in an early SVX (in mostly highway cruising), and 17.8 mpg in mixed city/highway driving.

With the available power driver’s seat, as well as the standard tilt/telescoping steering wheel, automatic climate control, and premium sound system, an SVX yields a very comfortable driving environment. Subaru claimed 4-passenger seating, but the rear seat lacks sufficient head room for average-sized adults, and would be short on leg room as well with tall people seated up front. Although the trunk is fairly large, its opening is quite small, so getting luggage in and out can become tedious.

Subaru’s “window-within-a-window” side glass treatment was supposed to reduce buffeting with the windows open. Although the inner window frame leaves a “line” in the driver’s peripheral vision, most people won’t notice it after a while. Toll booths and ATM machines can be a challenge, because the window opening is so small. Otherwise, visibility is better than in most sports coupes.