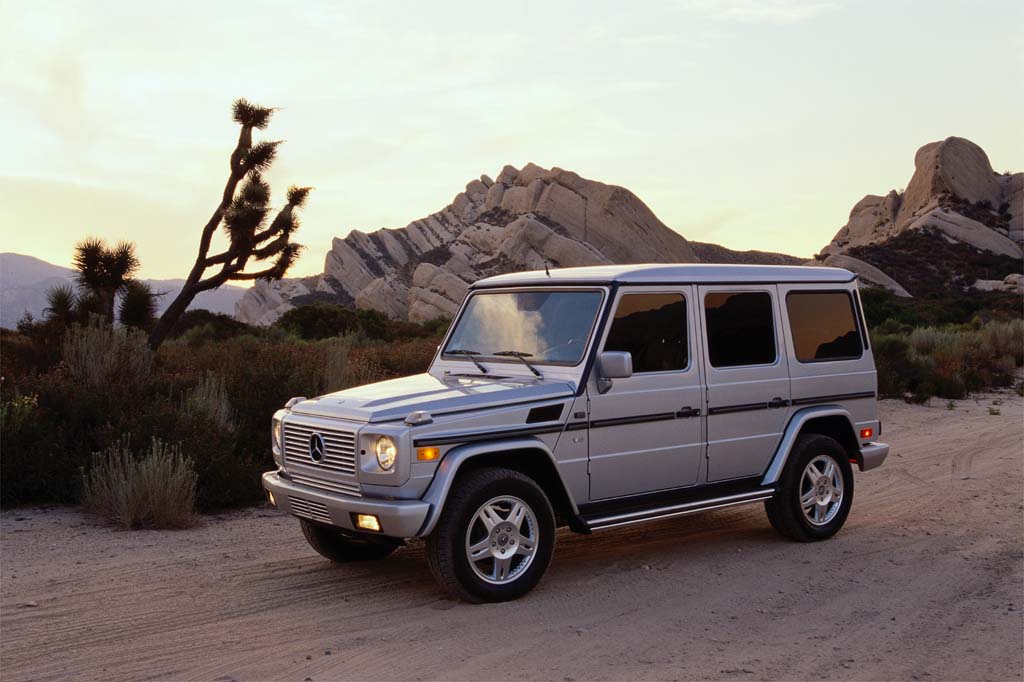 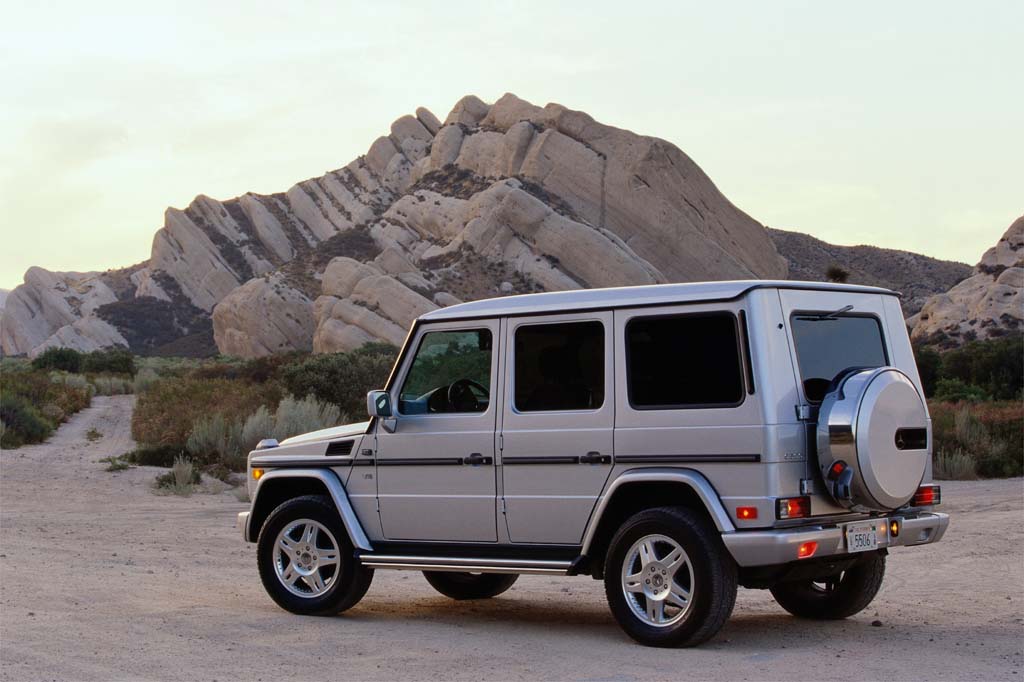 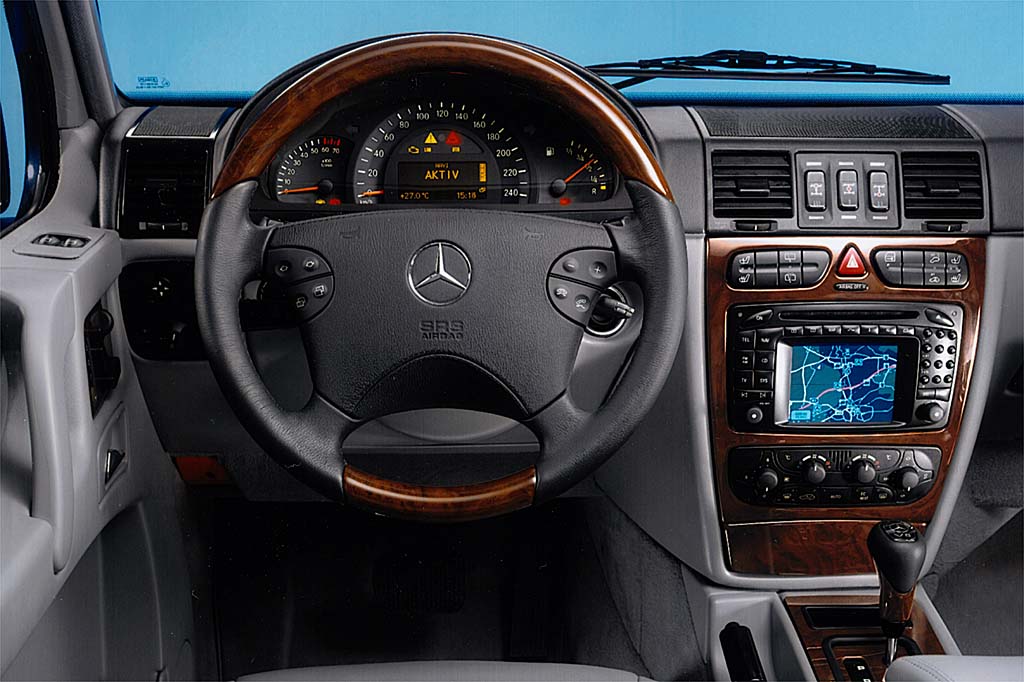 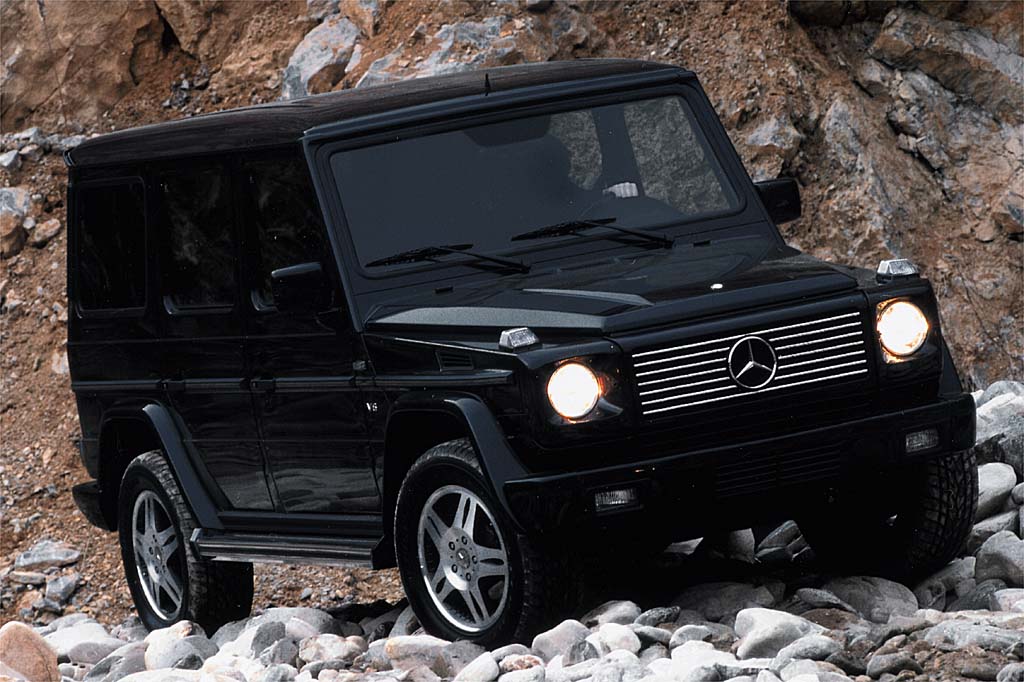 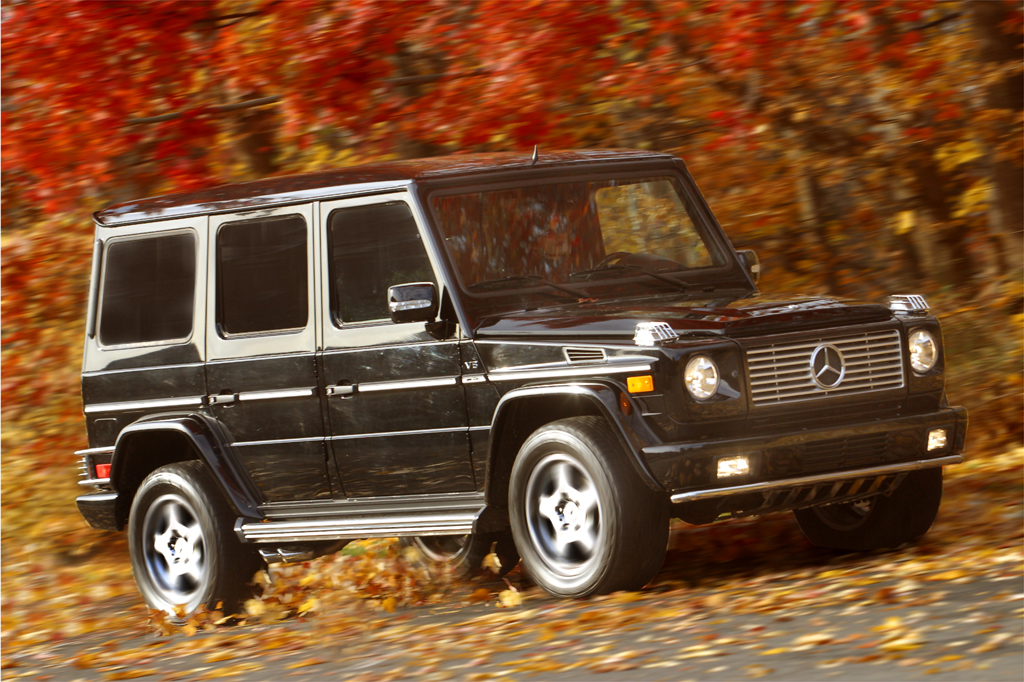 As a private import, the G-Class had achieved some celebrity cachet, which is one reason Mercedes dealers began selling it. Nevertheless, this old soldier suffers too many lapses for what it costs–including big gaps around the doors that partly expose the latches, creating a tempting target for thieves with slim-jims. Yes, the G-Class is very capable off-road, but other big luxury SUVs–including Mercedes’ own M-Class–offer far better everyday comfort, refinement, and performance, often for far less money.

Mercedes added a second SUV to its U.S. line for 2002. It was a back-to-basics design, initially created for the German army in the 1970s, and little-changed since.

Known informally as the G-Wagen–short for the German term Galaendewagen (“cross-country vehicle”)–the G500 was previously available in the U.S. only through private importers. Mercedes-Benz marketed it as a premium luxury SUV with a $73,165 base price. Private import versions had gone for $125,000 or more.

Sized for all-terrain work, the G500 was the shortest and narrowest full-size SUV–a Toyota Land Cruiser was 9 inches longer and 7 inches wider. The G500 used a 292-horsepower V8, five-speed automatic transmission, and all-wheel drive with low-range gearing that could be engaged on-the-fly at up to 15 mph. Its front, center, and rear differentials could be locked up for maximum grip.

Mercedes claimed that the G55 accelerated to 60 mph in just 7.2 seconds. A test G500 clocked a respectable 7.9 seconds for that feat, helped by a smooth, quick-shifting automatic transmission. Midrange pickup isn’t that strong, reflecting the tall, boxy vehicle’s hefty weight and poor aerodynamics.

Both models require premium fuel–and plenty of it. A test G500 averaged 13 mpg in city/freeway driving.

Firm, off-road-oriented suspension settings make for a fairly jiggly on-road ride. Some choppiness occurs due to the short wheelbase, but it’s never punishing. Still, most every other big SUV offers superior comfort with less pitching and rolling.

Steering is no match for a car-based SUV, though not as bad as the tall, narrow build might suggest. Like the ride, handling is disappointingly trucky and old-fashioned. Marked early body lean in quick turns creates a tippy cornering feel, and even moderately gusty crosswinds cause noticeable wander at highway speeds.

Steering effort is high at low speeds, and the steering wheel is slow to return to center after turns. Brakes deliver sure, reasonably short simulated panic stops with little nosedive–once they’re warmed up; until then, pedal action may be heavy and dead-feeling.

Noise levels are average at best. Wind and tire sounds intrude from as low as 45 mph, and there’s considerable full-throttle engine roar.

G-Wagens have the same clear gauge cluster as Mercedes’ entry-level C-Class cars, plus Mercedes-Benz’s complex COMAND video system that controls the navigation/audio/cell phone. Plenty of other switches are included, too, but most are handy and self-explanatory. One exception is the climate controls, which have small markings and sit just under the COMAND screen itself–too low down for easy use.

Dashboard night lighting is weak. G500 cabin decor is rather “industrial,” with old-fashioned square-cut interior shapes. Creaks and groans over railroad tracks contrast with the otherwise-solid bearing of this SUV. On the other hand, materials are of high quality–especially the wood dashboard trim and unusual berber-type headliner.

The rear bench seat is as hard and flat as the front buckets. Because it sits higher off the floor, headroom here ranks only very good. But that also means steeper step-in. Leg room is only fair, with the front seats pushed back.

Split 70/30, the rear bench seat double-folds to add cargo space, but stiff latches on test G500s have required undue muscle. Rear-wheel arches steal some cargo-bay floor area, yet there’s plenty of volume for big, tall boxes, even with the rear seat up.

The side-opening cargo door is clumsy–partly because of the heavy, bulky outside spare tire. Small-items storage is nothing special, and the two front cupholders are obvious afterthoughts.