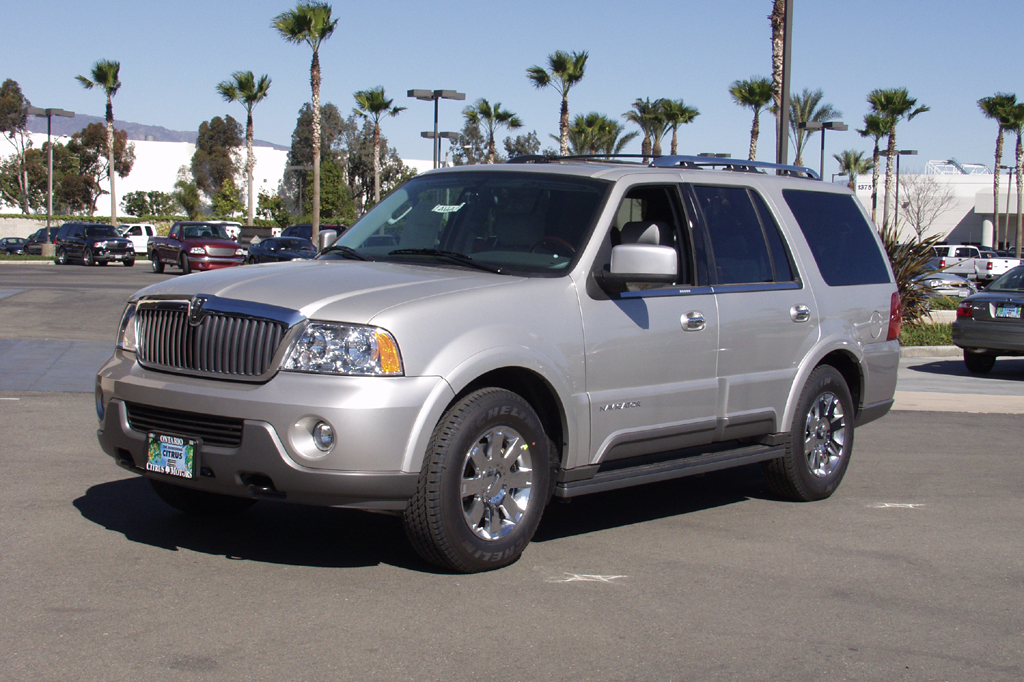 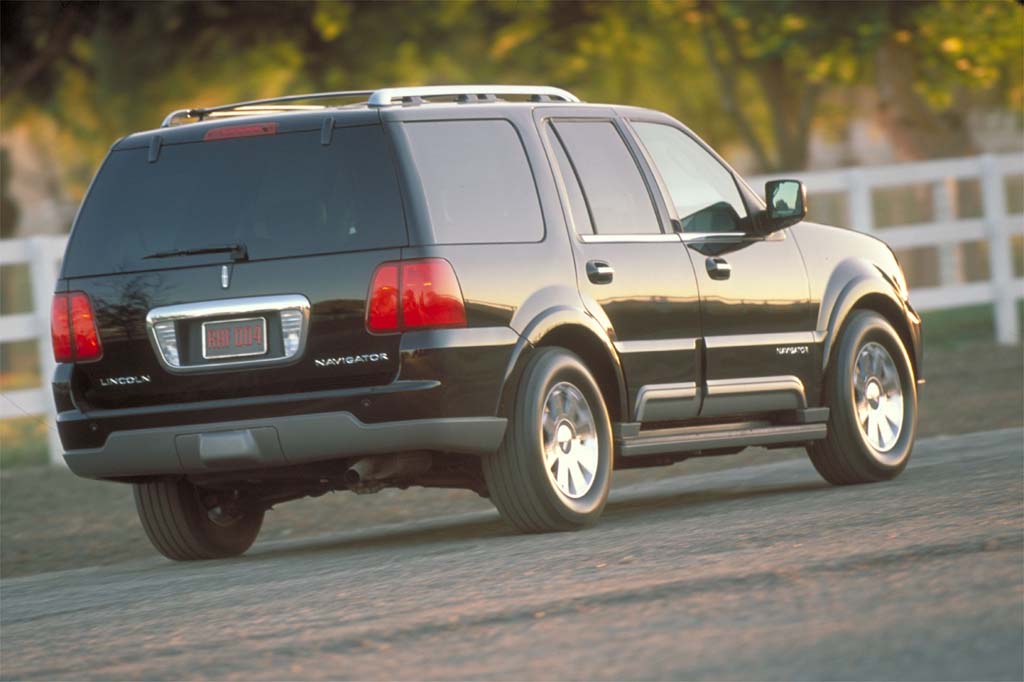 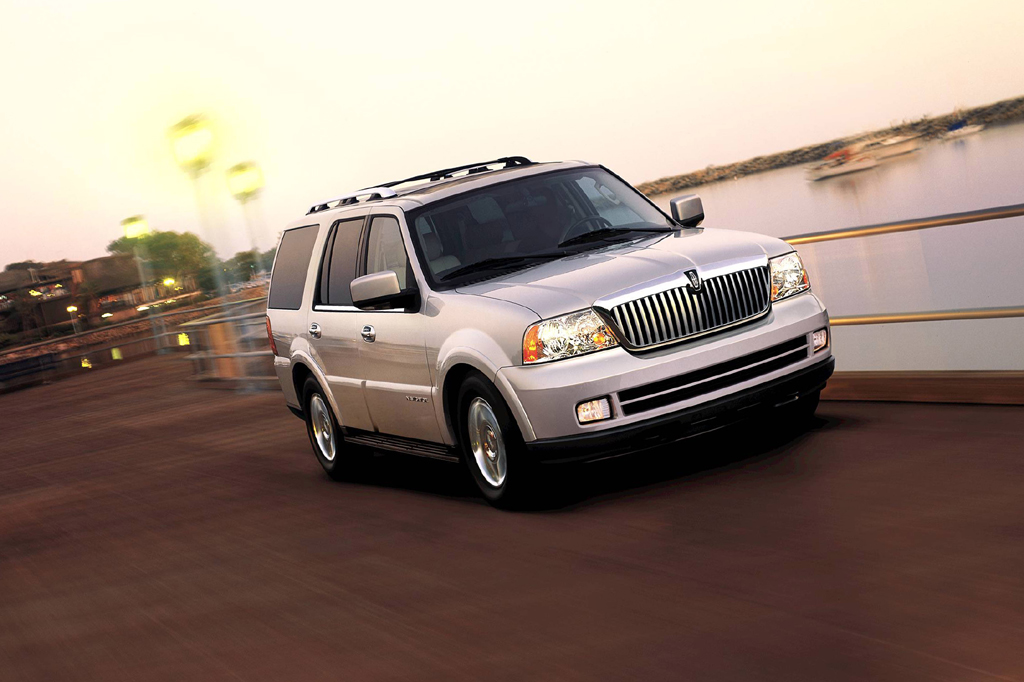 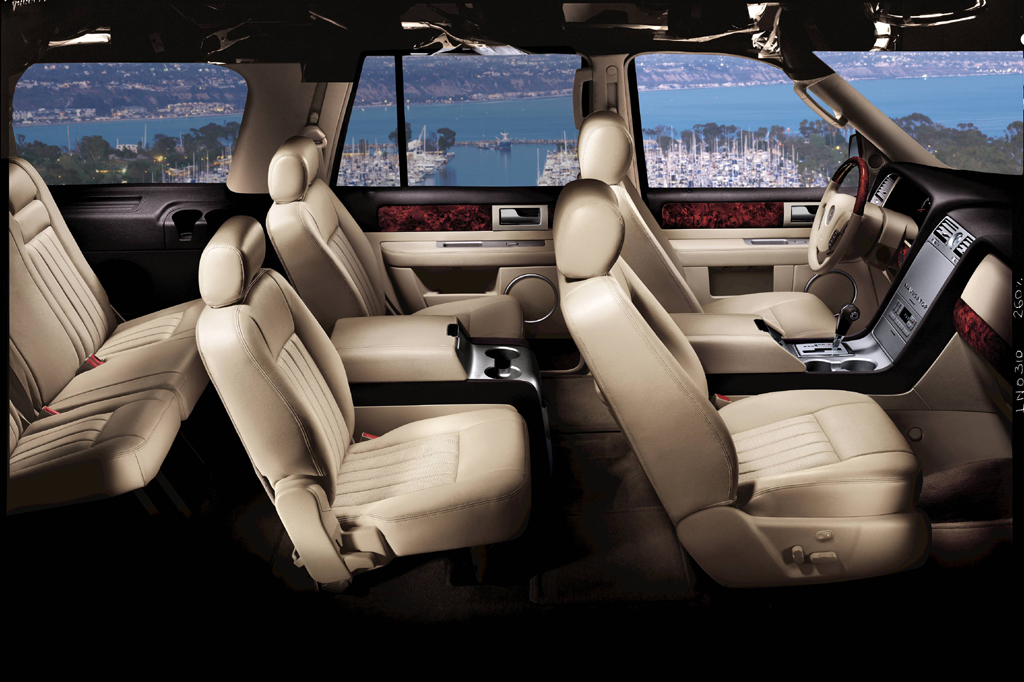 Luxury, Premium, and top-line Ultimate models were offered, all equipped with a 300-horsepower, 5.4-liter V8, versus the 260-hp engine in the Expedition. A four-speed automatic was the sole transmission.

Navigators were offered with rear-wheel drive or Ford’s ControlTrac four-wheel drive, which could be left engaged on dry pavement and included low-range gearing. Antilock four-wheel disc brakes, 18-inch wheels (versus 17s in 2002), power-adjustable pedals, leather upholstery, and genuine walnut interior trim were standard. So were curtain side airbags that served the first and second seating rows, and were designed to deploy in side impacts and rollovers. Torso side airbags were unavailable.

Heated power-folding door mirrors and an in-dash CD changer also were standard. A self-leveling air-spring suspension was included with 4WD.

Second-row seating was a choice of two buckets with a center console, or a three-passenger split-folding bench. A 60/40 split folding third-row bench was standard.

The Premium model featured traction/antiskid control and heated/cooled front seats. The Ultimate added a power-fold feature for each section, which was also available for the Expedition. However, no other SUV offered the Navigator Ultimate’s standard power liftgate or power running boards. The latter automatically extended when a side door opened, and retracted when it closed.

In 2003-04 models, a dual-overhead-cam 5.4-liter V8 engine that generates 300 horsepower drove a four-speed automatic transmission. For 2005, the V8 again was rated 300 hp but gained torque, and a six-speed automatic replaced the four-speed. Navigators may have rear-wheel or four-wheel drive.

Performance is competitive with most rivals. A Navigator feels brisk off the line, and delivers better-than-adequate passing power. A test 4WD Premium Navigator accelerated to 60 mph in 9.7 seconds. Actually, the lighter, 260-hp Expedition is about as quick. An AWD Cadillac Escalade feels stronger, with 345 horsepower for similar weight. Lincoln’s smooth automatic transmission provides timely gear changes.

Steering feel and precision are almost carlike, with fine straightline stability and a relatively tight turning circle. However, all but gentle curves trigger nose plow and body lean that bespeak a big, heavy truck. Roll Stability Control should enhance stability. Little nosedive has been noted in simulated 60-mph emergency stops, but test distances have been a bit long. Brake-pedal action has varied from touchy yet spongy to natural and easily modulated.

Navigators are generally quiet and satisfyingly refined. Wind rush may be noticed above 50 mph, but tire thrum is moderate. The engine sounds strained in brisk takeoffs and midrange passing sprints, but is otherwise subdued.

Interior ambience benefits from rich-looking leather and wood, plus a stylish dashboard. However, “brushed metal” panels are painted plastic, and, like some switchgear, feel cheap. Minor controls are mostly handy and intuitive, but many markings are too small. No transmission gear-selection indicator is included in the main instrument panel. Power-window controls are placed on the center console. With a navigation system, the CD changer is inconveniently buried in the front passenger footwell. Power-seat switches are difficult to reach with doors closed. The navigation system’s screen is easy to read and reasonably easy to use, with familiarization.

Front space and support are ample for even the largest occupants, though front-seat armrests would improve long-trip comfort. A tall build prevents the driver from seeing much near the vehicle. The standard obstacle-warning system partly compensates, as do large door mirrors that tilt down when selecting Reverse. Optional power side steps on the Ultimate help ease high step-in.

The available second-row bench fits three adults, but all positions are narrowly defined by seatbelt buckles. The bench’s middle section slides forward 11 inches for child-seat access, but there’s no center armrest. Second-row buckets are more substantially padded than the Expedition’s, but still offer no abundance of leg room. The third row offers best-in-class space on a chair-height bench, though the cushion could be longer and softer. Third-row head room in the Ultimate is compromised somewhat by the power liftgate mechanism.

Cargo space is skimpy behind the third row, ample with it down, and cavernous and usefully flat with all rear seats dropped. Second-row seats have high-effort flip-forward releases and lack counterbalancing for their poorly leveraged weight. Manual third-row seat releases are a long stretch from the rear, with the seat lowered. The power third-row seat raises and lowers conveniently via buttons at the rear and middle of the vehicle.

Although the liftgate opens tall enough to clear a six-footer’s head, it’s difficult to pull down manually, and not easily reached by short people. The Ultimate’s power liftgate operates from the cabin or keyfob.