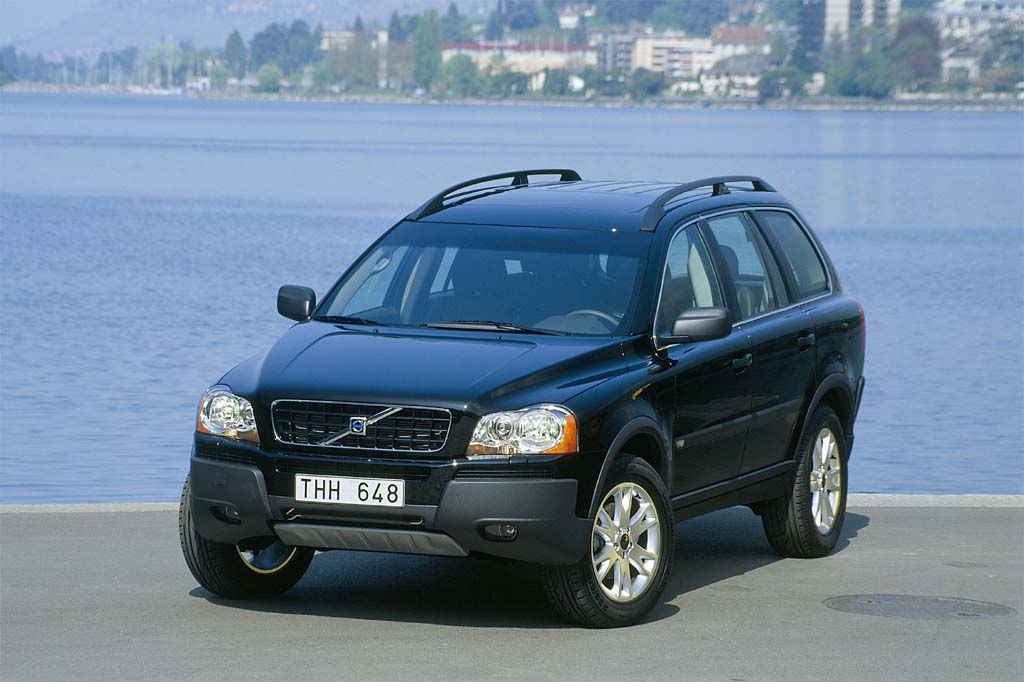 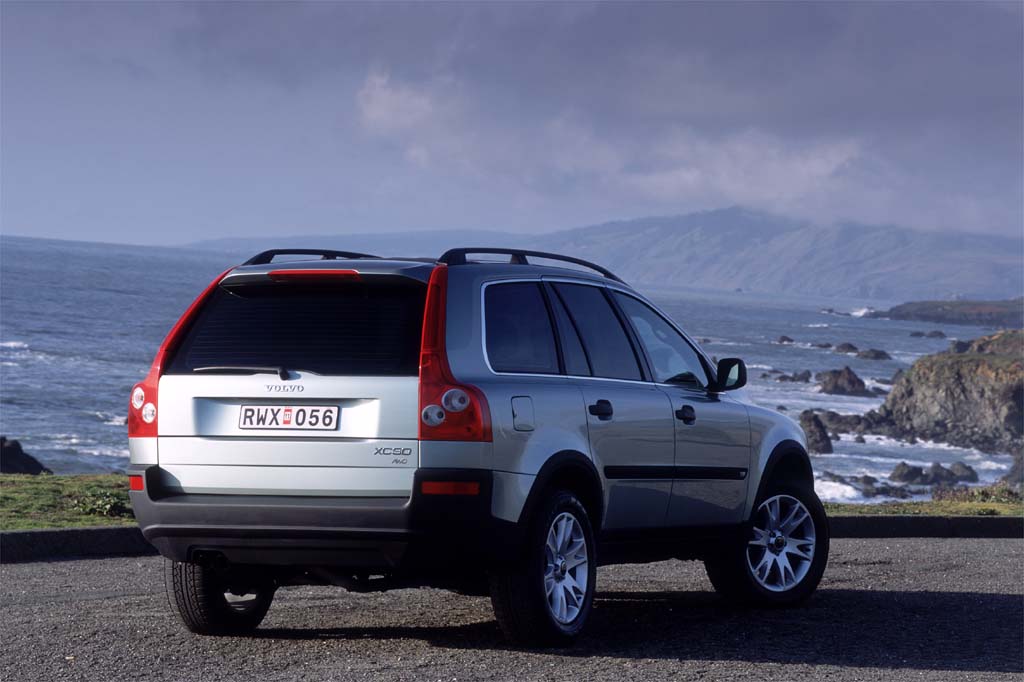 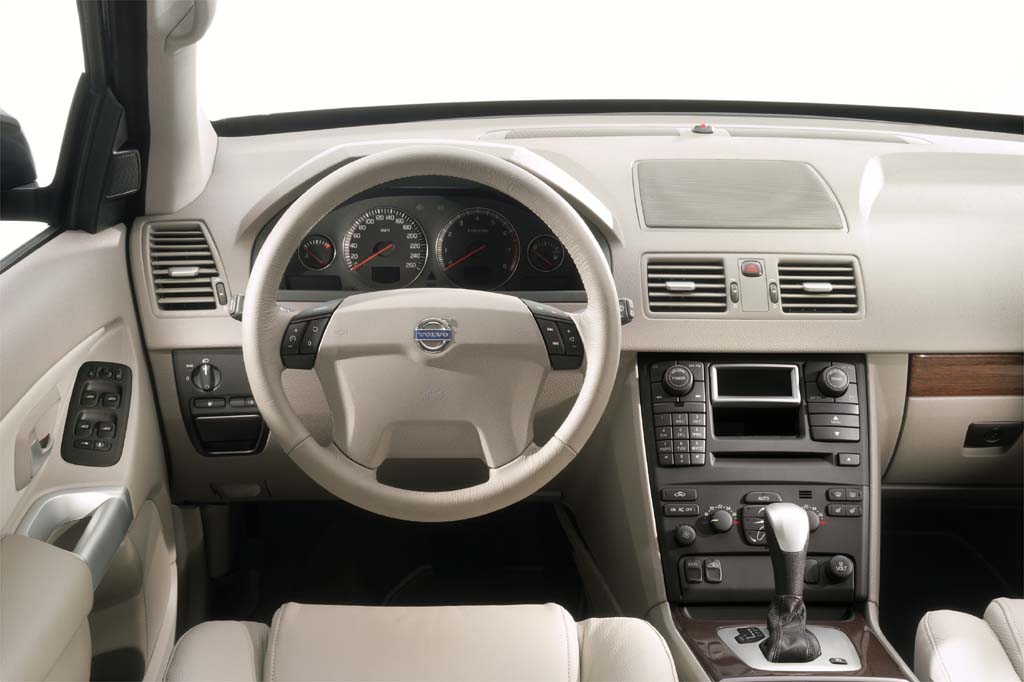 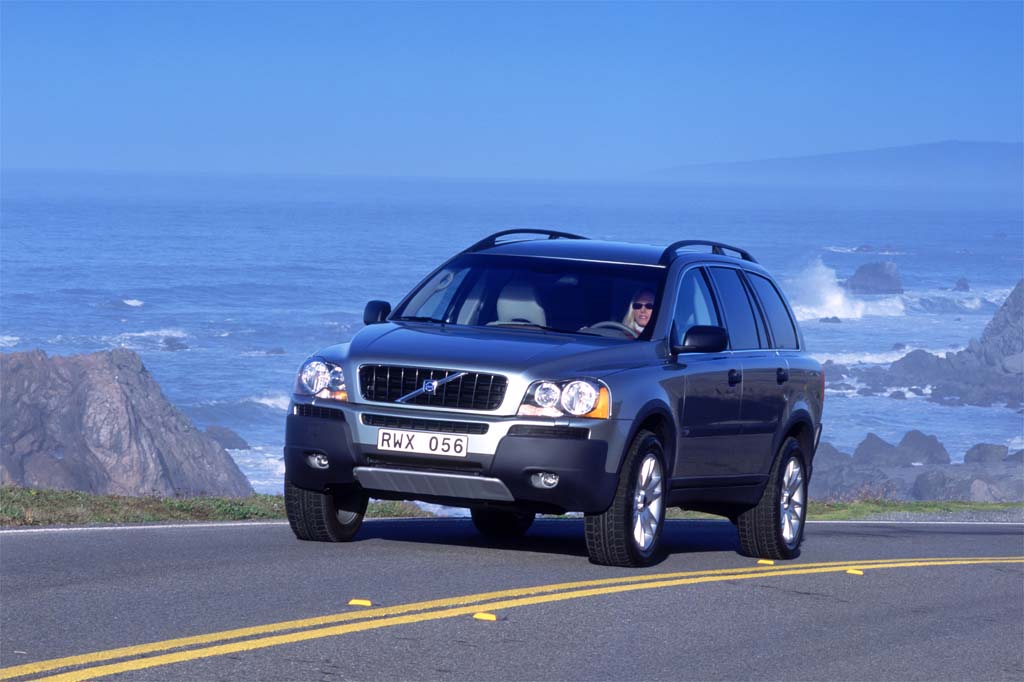 Volvo fans got an SUV to call their own, but most any buyer would approve of the XC90’s carlike road manners, rock-solid feel, solid workmanship, and numerous safety features. Relatively weak acceleration of non-V8 models is a drawback, and the five-cylinder engine’s level of refinement disappoints. Handling-conscious buyers may wish for firmer steering. Prices might tempt MDX or RX intenders, and even some six-cylinder BMW X5 and Mercedes M-Class shoppers.

Sized and priced to compete with the Acura MDX and Lexus RX 300, Volvo’s first sport-utility vehicle was based on the company’s S80 sedan platform. Built in Sweden, the XC90 was a four-door unibodied wagon with turbocharged power and a choice of five-passenger seating or space for seven with an available third-row bench. A combination rear liftgate with smaller, drop-down tailgate panel was standard.

The entry-level 2.5T came with front-wheel or all-wheel drive, a 208-horsepower five-cylinder engine, and five-speed automatic transmission. The T6 AWD had a 268-horsepower six-cylinder engine and a four-speed automatic. Both transmissions incorporated a manual shift gate. XC90’s AWD lacked low-range gearing and wasn’t intended for severe off-road use.

All models included antilock four-wheel disc brakes, traction/antiskid control, and Volvo’s new Roll Stability Control, which was designed to activate the antiskid system to reduce the chance of a rollover if sensors detected unusually rapid or severe body lean. Also standard were front torso side airbags and curtain side airbags, covering front- and second-row seats. The third-row seat was part of the optional Versatility Package, which also included curtain-airbag coverage for the third row, a load-leveling rear suspension, and third-row air conditioning and audio controls.

XC90’s second-row bench was split 40/20/40 and offered an optional integrated child booster seat for its middle section. All three sections slid fore and aft. Every XC90 had wood interior trim. Leather upholstery was optional on the 2.5T and standard for the T6. The T6 also added a sunroof, in-dash CD changer to replace a single-disc player, power passenger seat, and 17-inch wheels substituting for 16s. Those items also were available for 2.5Ts. Other options included rear-obstacle detection, navigation system, heated front seats, and for the T6, 18-inch wheels. Rivals included the Acura MDX and Lexus RX 330, and later, the Cadillac SRX.

Initial tests of AWD models showed both the 2.5T and T6 short of midrange urge, with the 2.5T struggling to maintain speed up steep grades. A 2.5T accelerated to 60 mph in 9.2 seconds, versus 8.8 seconds for the T6. That’s competitive with direct-rival SUVs. On the whole, though, XCs take on most any situation with sufficient power. Both XCs annoyed with unprogressive throttle action and some turbo-induced lag. Those flaws were especially evident when passing, where automatic transmission kickdown demands a hard right-foot shove. We also question how good acceleration would be when pulling the 5000-pound maximum trailer that all XC90s are rated to tow. Volvo’s V8 responds best to generous throttle application, but is strong from a stop and has fine midrange passing power. The six-speed automatic shifts seamlessly.

As SUVs go, XC90 is quite stable on straightaways, well-planted, and forgiving on fast, twisty roads. Essentially, it feels like a tall, heavy station wagon. But steering is too light and numb for best control, and needs better on-center feedback. XC90s are a bit ponderous in quick, around-town maneuvers. Stability and precision increase with speed. Expect good grip and balance in fast turns, despite generous body lean. Wind gusts are felt at highway speeds, too. Stopping power is fine, but pedal feel on initially application has been overly sensitive–slightly spongy when pushed quickly.

As in Volvo cars, the smooth six-cylinder engine doesn’t intrude except near top rpm, but the five-cylinder is throbby and coarse as revs rise, with a slightly uncouth sound. Volvo’s polished V8 is nearly hushed at cruise, emitting precision hum during rapid acceleration. Wind rush builds with speed but does not annoy. Tire thrum is muted except on very coarse pavement.

Gauges and controls are modern-Volvo in style, placement, and function. The audio unit is slightly more intuitive than those in Volvo cars, but still not convenient to use. Likewise, the available navigation system, whose screen powers up from the dashtop and can wash out in bright light. But the handsome, well-assembled cabin, also typical Volvo, has attractive, quality-look materials throughout–except for low-grade plastic on door-pulls and the console.

Volvo’s usual wide, cushy front seats have chair-height positioning and are deficient only in lateral support during fast turns. Occupants get ample head room and adult-size leg space. The standard memory power seat and manual tilt/telescopic steering wheel help most any driver get comfortable. Visibility is good, though the elevated stance means objects near ground level can be hard to spot and rear headrests impede the aft view. Entry/exit is easier than on many rivals; step-in height is similar to that of the Acura MDX and Lexus RX.

Second-row entry/exit is impeded by narrowish doors that should open wider. Room and comfort in the second row are acceptable for two adults, but not three. Very tight passageways make third-row access a real squeeze except for two small kids.

The large rear liftgate doesn’t rise quite enough to clear a six-footer’s head, but a short lower tailgate eases loading and reach into the cargo bay. Cargo volume is only 11.1 cubic feet behind the third row, but both seats fold easily to create a flat load deck and class-competitive volume. No need to remove rear-seat headrests, either. Small-items storage includes molded bottle/can holders in roomy door map pockets, but many rivals have more space.