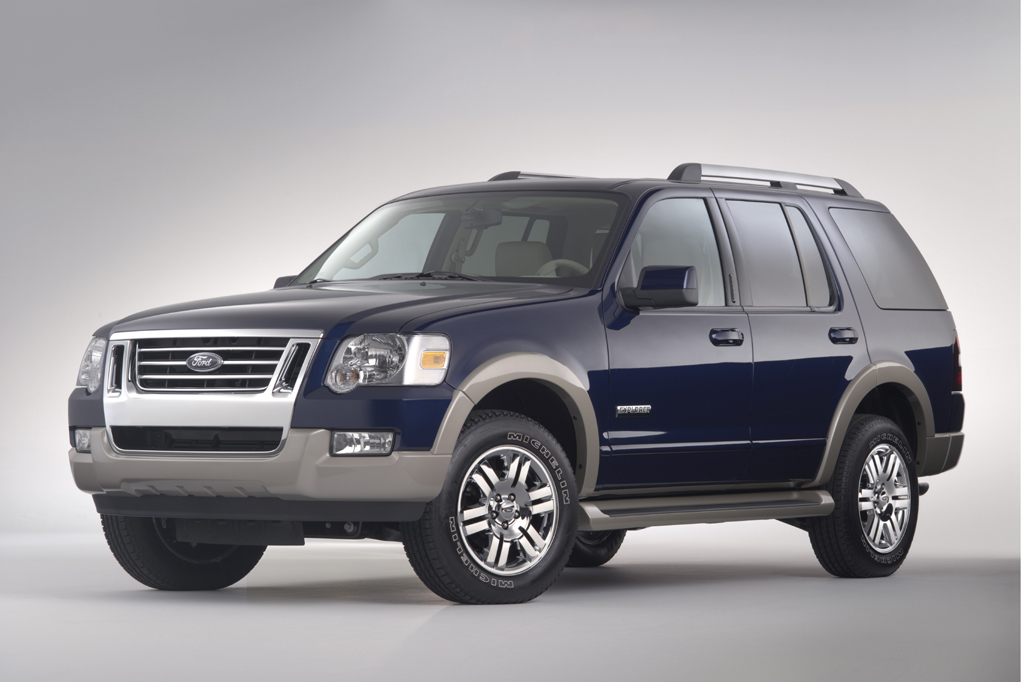 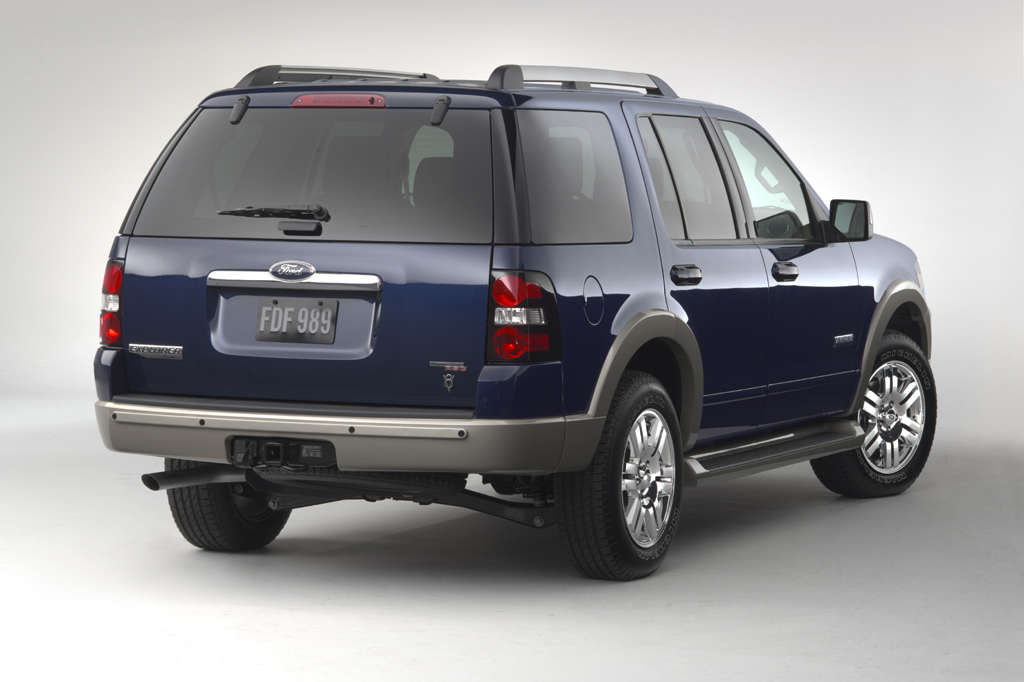 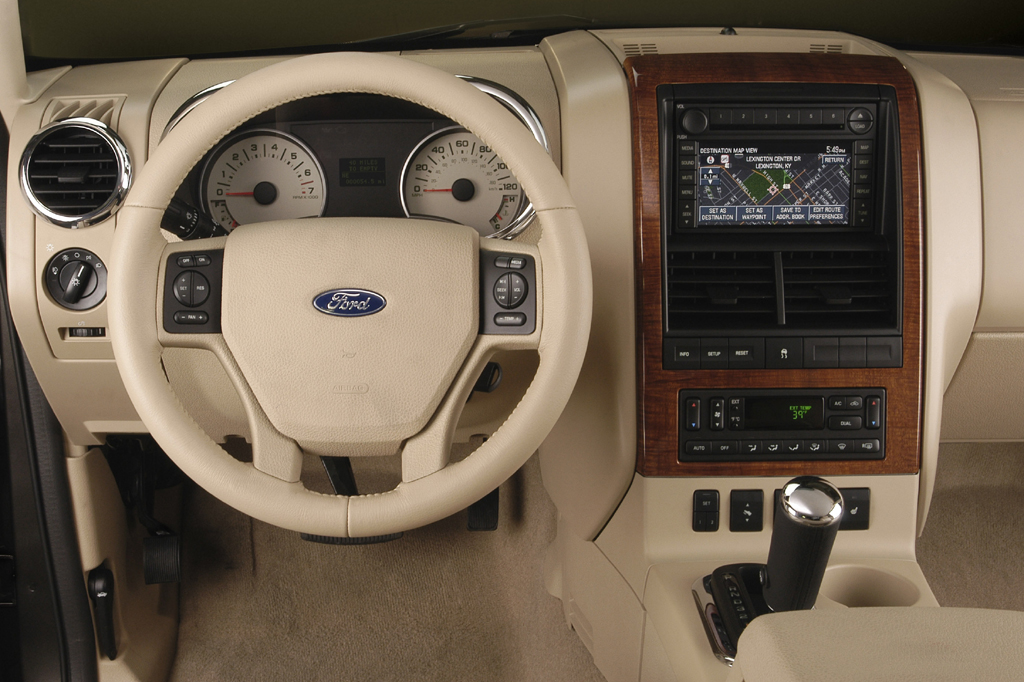 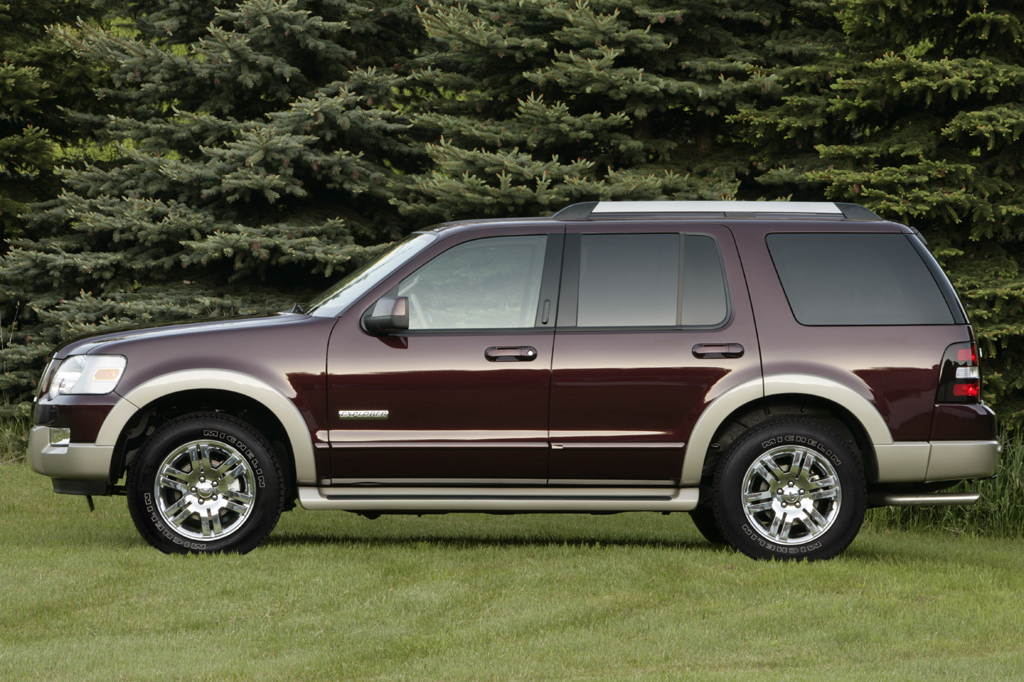 Like Mercury’s slightly more upscale Mountaineer, Explorer is a more-than-competent overall performer with an outstanding array of available useful features: V8 power, seven-passenger seating, curtain airbags, DVD entertainment, power-folding third-row seat, rear obstacle detection. The standard antiskid system was a laudable safety feature. Though a car-type SUV might be thriftier, those requiring Explorer’s towing ability will be well served. An Explorer serves trailering needs without giving up much refinement to lighter-duty midsize SUVs. Overall, this is a solid Recommended pick.

Two engines were offered: a V6 with 210 horsepower, and a V8 with 292 horsepower (up 53 over the prior year). The V6 came with a five-speed automatic transmission, while the V8 got a new six-speed automatic.

Front side airbags were newly standard. An available third-row seat provided seven-passenger capacity; for 2006, it offered a power-folding feature.

Antilock braking was standard, as was Ford’s AdvanceTrac antiskid system with Roll Stability Control. That latter system was designed to detect an impending tipover and activate the antiskid system to reduce the chance of a rollover. Optional head-protecting curtain side airbags covered the first and second seating rows and were designed to deploy in side impacts and rollovers.

Explorers had a choice of V6 or V8 power. The 4.0-liter V6 produces 210 horsepower, mating with a five-speed automatic transmission. A six-speed automatic worked with the 292-horsepower 4.6-liter V8. Explorers could have rear-drive or four-wheel drive.

Explorer V8 models offer ample power for most any situation. A test 2WD Limited accelerated to 60 mph in 7.4 seconds. The V8’s six-speed automatic transmission shifts smoothly, but while part-throttle downshifts occur quickly, full-throttle downshifts may take longer. Ford said V6 Explorers and Mountaineers could accelerate to 60 mph in 10.2 seconds, which is acceptable for this class. Properly-equipped Explorers can tow as much as 7300 pounds.

Ride comfort ranks among the best of truck-type SUVs. Explorer suspensions are compliant even with optional 18-inch tires, and devoid of sloppy motions.

Explorers and their Mercury Mountaineer mates are among the quieter SUVs. Wind and road noise are well muffled, as is noise over bumps. Engines intrude only under full throttle.

Explorer and Mountaineer cabins differ mainly in trim appearance. Both have large, clear main gauges. Ford’s redesigned dashboard puts the radio high, just out of easy reach. Climate controls are easily accessed, but mounted low, and rotary dials would be preferable to the automatic climate system’s buttons. Unlike earlier Explorers, which had a steering-column gearshift, the current lever goes on the console–where it blocks easy access to climate controls. The turn-signal stalk is mounted at an awkward angle. Rear climate controls are set into the ceiling, difficult to reach. Interior materials are mostly solid feeling, despite many hard plastic surfaces.

Comfortable front seats promise plenty of room, though entry/exit is complicated by fairly high step-in. Some occupants may find that poorly-placed door armrests block the pull handles underneath. Outward visibility is hindered by thick roof pillars, but second- and third-row headrests fold to reduce obstructions. The available rear-obstacle-detection system adds a measure of safety when backing up. Three adults can squeeze across in the roomy second row, where there’s generous headroom. Leg space only grows tight with front seats fully aft, and toe room is restricted. The third-row seat cushion is low to the floor and pancake-flat, and floor shape obstructs foot room, but headroom is expansive and leg space surprisingly good. Second-row seats tip forward in a single, easy motion, but access to the third row is still for the young and/or limber. Available power running boards automatically deploy when a door opens, but they don’t extend far enough to be wholly useful.

Second- and third-row seats fold nearly flat for ample cargo room, but they leave gaps large enough for smaller items to fall through. The separate-opening hatch glass is handy, but the hatch itself is weighty to open or close. Ford’s optional power-folding third row is a real convenience. Aside from a large console box, interior storage is meager.