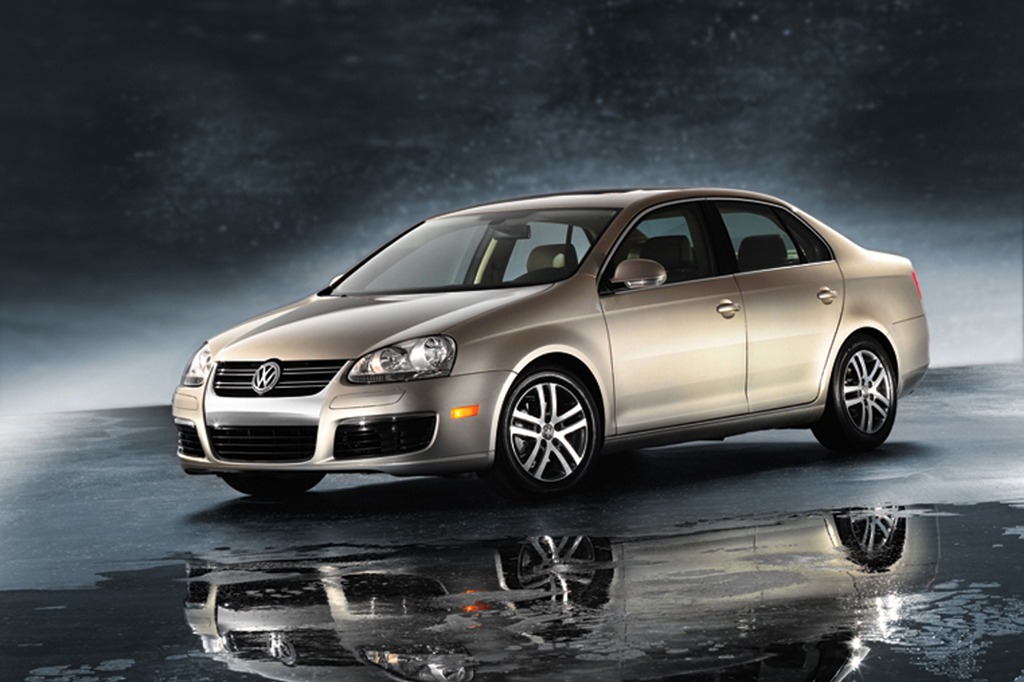 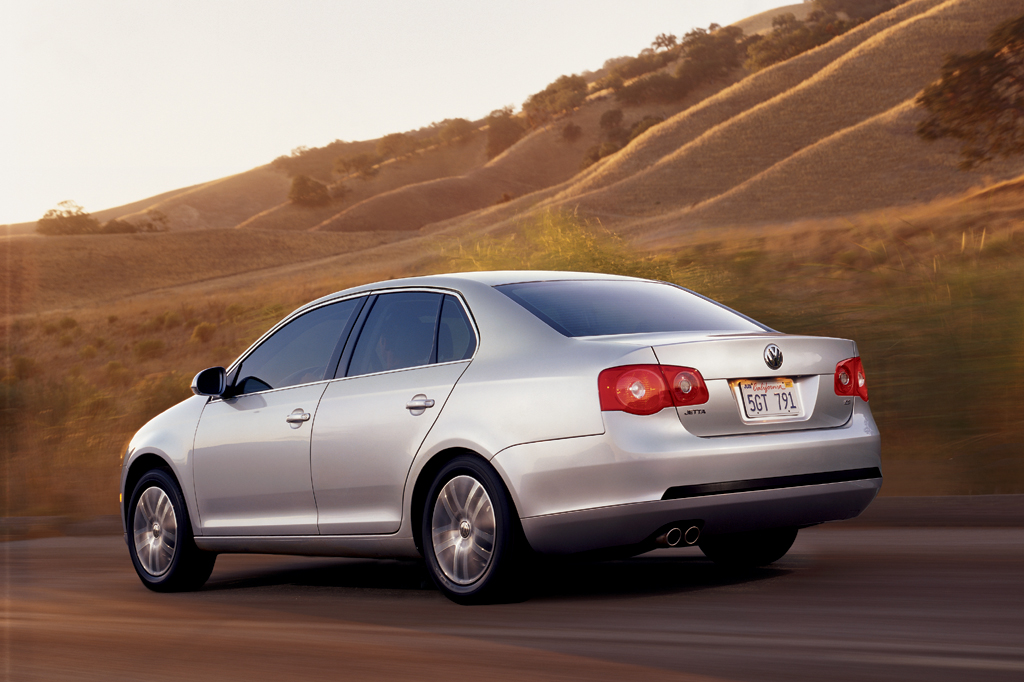 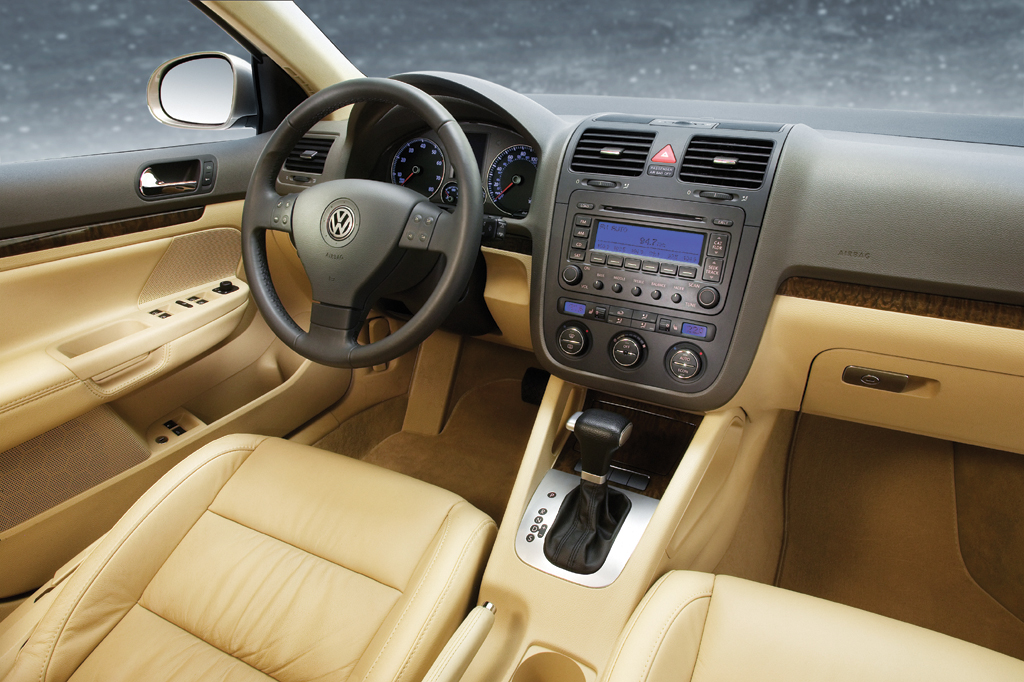 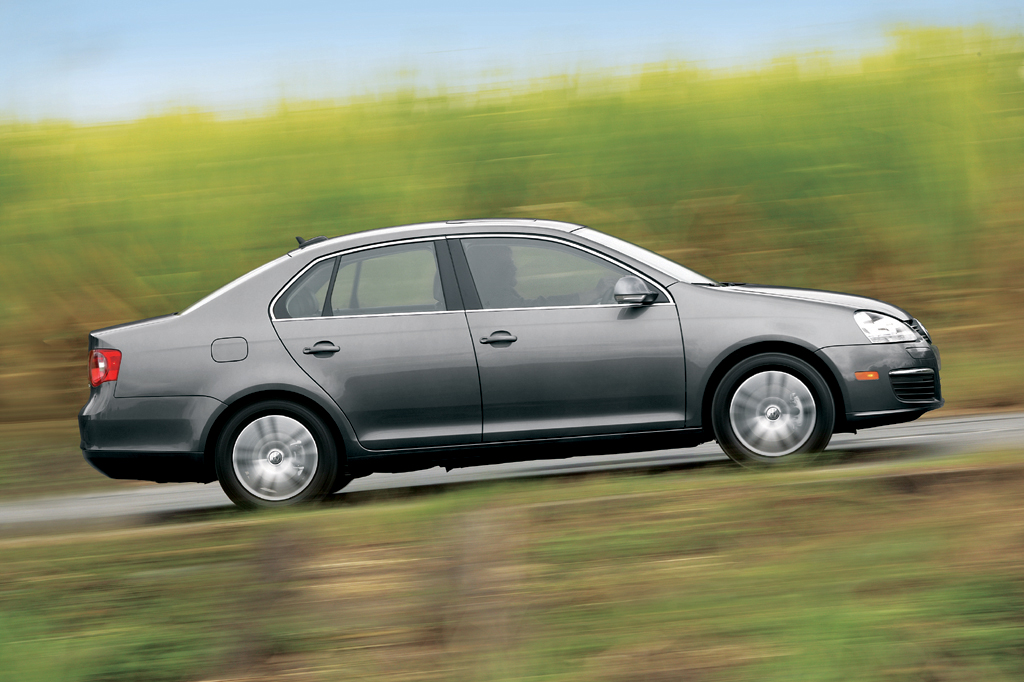 The Jetta was redesigned in mid-2005, and oddly, the new car was called a “2005.5” model rather than a 2006. However, we start this generation with 2006 to avoid confusion with the prior design that dated back to 1999. The new front-drive compact sedan was 2.6 inches longer in wheelbase and 7 inches longer overall than the 1999-2005 version. Four-door competitors included the Ford Focus, Honda Civic, and Mazda 3.

A 150-horsepower five-cylinder engine went into Value Edition and 2.5 models. The TDI held a 100-horsepower turbodiesel four-cylinder engine. A five-speed manual transmission was standard for the Value Edition, 2.5, and TDI. Optional for the Value Edition and 2.5 was a six-speed automatic with a manual shift gate. The TDI model could get a Sequential Manual Transmission (SMT), which was essentially a manual gearbox with no clutch pedal that could be set to shift like an automatic.

During the “regular” 2006 season, Volkswagen expanded its redesigned Jetta line, adding a turbocharged gasoline engine and available rear side airbags. Five versions were now offered. New were the 2.0T and GLI, both with a 200-horsepower turbocharged four-cylinder and six-speed manual transmission. Optional for the TDI, 2.0T, and GLI was a six-speed Sequential Manual Transmission (SMT). Like the 2.5 and TDI, the 2.0T rode on 16-inch wheels. 17-inch wheels were standard on the GLI and optional for the 2.0T. Xenon headlights were standard on the GLI and optional for the 2.0T. A navigation system was newly available on all models, excluding the Value Edition. Also available were heated front seats, dual-zone automatic climate control, wood trim, leather upholstery, satellite radio, and a sunroof. GLI models had a sport suspension, plus unique interior and exterior styling. A multi-function trip computer was standard. Rear side airbags and 18-inch wheels with performance tires were exclusive GLI options. An antiskid system was optional for the Value Edition and standard on other models.

When the current Jetta debuted in mid-2005, the Value Edition and 2.5 used a 150-horsepower five-cylinder engine, while the TDI held a 100-horsepower turbodiesel four-cylinder. A five-speed manual transmission was standard for each of those models. Optional for the Value Edition and 2.5 was a six-speed automatic with a manual shift gate. For 2006, a turbocharged 200-horsepower four-cylinder went into the new 2.0T and GLI, both of which had a six-speed manual transmission. Optional for the TDI, 2.0T, and GLI was a six-speed Sequential Manual Transmission (SMT). For 2008, the 2.5-liter 5-cylinder engine got a 20 hp bump to 170-hp. For 2009, Jetta added a 140-hp 2.0-liter 4-cylinder turbodiesel engine.

Base and 2.5 models offer good power around-town, but weaken when it’s time to pass or merge. Volkswagen’s low-revving five-cylinder needs full throttle for best takeoffs, and feels taxed up long grades. One test 2.5 model accelerated to 60 mph in 9.0 seconds, which falls below midpack for the class. Most around-town and highway travel is stress-free, thanks in large measure to the nicely matched six-speed automatic transmission. A diesel TDI is slow off the mark, but fairly strong for midrange passing. The GLI and 2.0T are satisfyingly quick, especially in the 45-65 mph range, where strength is needed most. A test manual-shift GLI accelerated to 60 mph in 6.8 seconds.

Fuel economy is passable with gasoline engines, and super with the diesel. Test 2.5 models with automatic averaged 19.7 mpg in mostly city driving, 23.0 to 26.2 mpg in mostly highway use. A GLI sedan averaged 18.1 mpg, including gas-eating performance runs. Further up the frugality spectrum, a stick-shift TDI managed 40.1 mpg. Volkswagen recommends regular-grade for the five-cylinder engine, but premium for the turbo.

Ride comfort scores at the top of the class, at least with 15- or 16-inch tires. Minor float occurs over big moguls at highway speed, but otherwise the Jetta is absorbent, quiet, and composed, even on cratered pavement. With its 17-inch tires, the GLI feels jiggly, thumpy–even borderline harsh on all but smooth roads; and 18-inch tires won’t improve that situation.

In steering/handling, too, Jetta ranks as a compact-class standout, cornering with grippy assurance and modest body lean. The TDI sedan feels slightly more nose-heavy, but offers the same responsive steering as gas-engine models. Elsewhere in the lineup, the GLI offsets its lumpy ride with terrific handling. The antiskid system is a laudable safety plus for Jetta’s class, so are the strong antilock four-wheel disc brakes.

Generally a highly refined compact, Jetta sags somewhat because of its five-cylinder engine, which is gruff at idle in rapid acceleration, though it cruises quietly enough. Volkswagen’s diesel engine clatters at idle and throbs during low-speed acceleration. Coarse-surface tire thrum is impressively low with 15- or 16-inch tires, but more prominent with bigger rubber. Some test Jettas have exhibited intrusive wind rush from front pillars and side windows at highway speed.

Dashboards furnish clear gauges and handy, intuitive controls, but the cruise-control stalk can be confused with the turn-signal lever. Some testers have found the blue/purple instrument-panel lighting too soft for best nighttime legibility, too. Jetta’s high-quality interior contains many soft-touch surfaces. If the pricey Package 2 option was installed, that Jetta features rich wood and leather trim.

Cargo space in sedans is generous, compared to cars of any size, enhanced by a large aperture, nonintrusive trunklid hinges, and 60/40-split folding rear seat. The wagon offers as much cargo space as some larger wagons and even SUVs. Cabin storage is quite good on both body styles.