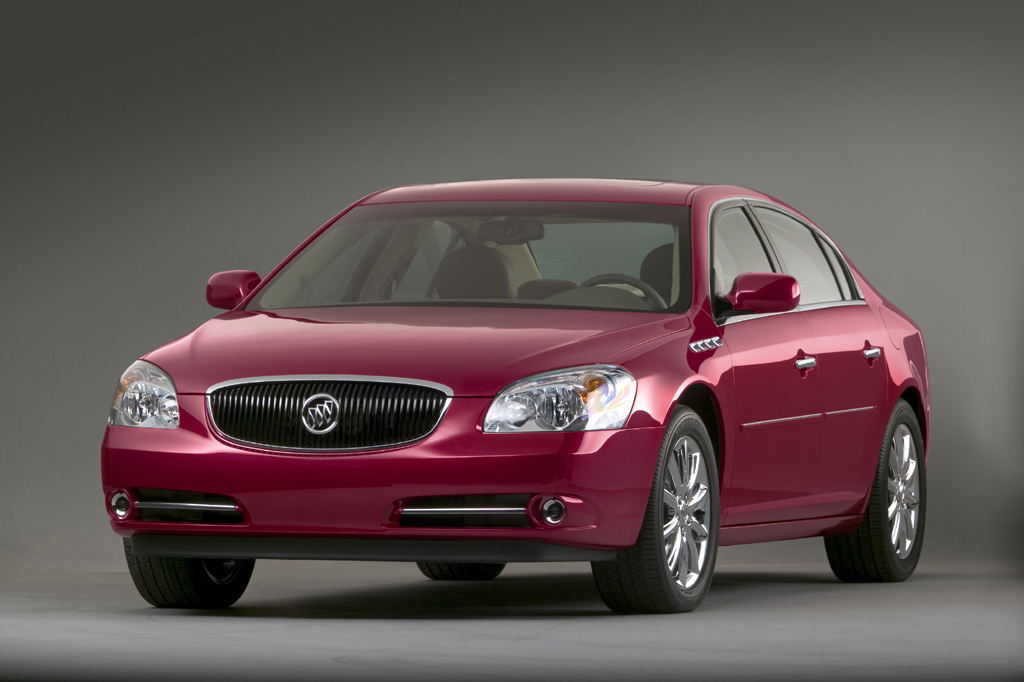 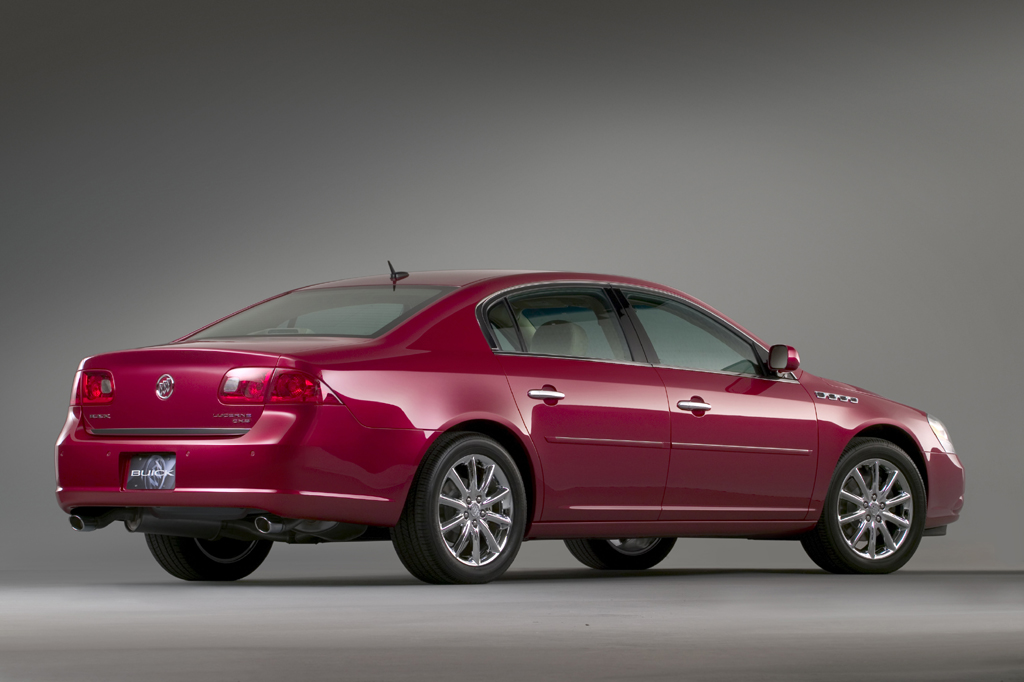 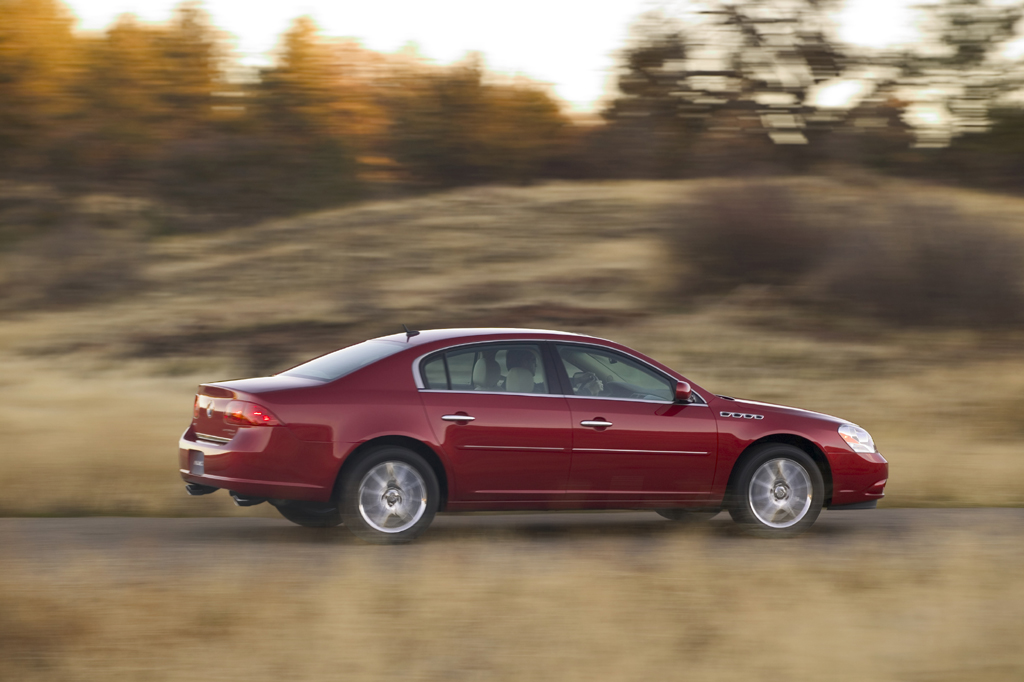 Lucerne occupies a comfortable middle ground between the more flamboyant Chrysler 300 and the more conservative Toyota Avalon. Clearly, it’s a step up in roominess and features from the old Buick LeSabre and Park Avenue sedans that it replaces. The V8 CXS model rivals some sedans in the premium large car class for power, if not for overall sophistication. It also offers better ride control. Best Lucerne value, though, may be a well-appointed CXL with the V6, which delivers performance and comfort at a relatively reasonable price for the large-car group. Resale values have been a little higher than those of other Buick models.

For the 2006 model year, Buick replaced its best-selling LeSabre and also the top-of-the-line Park Avenue with a brand-new Lucerne. Competing against the Chrysler 300, Mercury Montego, and Toyota Avalon, this front-wheel-drive full-size sedan was the first Buick to offer V8 power in more than a decade.

Lucerne shared its basic architecture and V8 engine with the premium Cadillac DTS. Measuring 2-3 inches longer in wheelbase than its predecessor, the Lucerne split the difference in overall length, falling between the dimensions of its two forerunners.

Four trim levels were offered: CX with a 197-horsepower V6, top-of-the-line CXS with a 275-hp V8, and midlevel CXL that came with either engine. All models used a four-speed automatic transmission.

Antilock four-wheel disc brakes were standard. An antiskid system was standard on the CXS and optional for the CXL V8. Exclusively on CXS models, the antiskid system teamed with GM’s Magnetic Ride Control, which was designed to adjust the ride to match road surfaces and driving conditions.

All Lucernes contained head-protecting curtain side airbags and front torso side airbags. CX models rode on 16-inch wheels, while the CXL had 17s and the CXS 18-inchers. OnStar assistance was standard. Leather upholstery was standard in CXL and CXS models, but unavailable for the CX. Available features included remote engine start, heated and cooled front seats, rear park assist, and satellite radio.

Lucernes have come with either V6 or V8 power. In the CX and CXL, a 3.8-liter V6 produces 197 horsepower. Standard in the CXS and available for the CXL was a 275-hp V8. Both engines used a four-speed automatic transmission. The new-for-2008 Super model had a 292-hp version of the 4.6-liter V8.

Fuel economy is about as expected. A Lucerne CXS averaged 15.4 mpg in mostly city driving, and 22.4 mpg with more highway use. In an even mix of city/highway driving, a CXL delivered 18.1 mpg. Buick recommends 87-octane fuel for the V6 and 92-octane for the V8.

Ride quality varies with the model. Though it’s compliant over bumps, unwanted body motions abound in the CXL, including floatiness at higher speeds and some bobbing over broken surfaces around town. The CXS is more composed and nearly as compliant, with little additional harshness. Its Magnetic Ride Control quickly compensates for road irregularities, but the CXS still suffers from an excess of unwanted body motions. Buick says the lower-priced CX’s suspension is more comfort-oriented.

Though not athletic, Lucerne is more taut on the road than the traditional large-Buick norm. Magnetic Ride Control and 18-inch tires make CXS the best-handling model. CXL versions suffer copious body lean in turns. The CXS also leans, but handles better overall. With a V6, steering is vague and overboosted on the highway. V8 models use variable-assist steering that feels more precise. V8s also get larger brakes with impressive stopping power, but all models halt with confidence and have reassuring pedal feel. All Lucernes have a wide turning circle, which translates to poor close-quarters maneuverability.

Impressively quiet, Lucernes are reminiscent of traditional Buicks. Engines are muted in all but full-throttle situations. The CXL’s 17-inch tires generate less rumble than the CXS’s 18-inchers, but neither is intrusive.

Large adults can expect ample front head and legroom. Front seats are comfortable and supportive. Available heating and cooling work well. Visibility to corners is compromised by large roof pillars. The backseat is comfortable for two adults; only taller riders might wish for more head clearance. Three-across seating is compromised by an uneven floor and contoured seat bottom. Some testers say the rear seat is too low for best support. Lucerne trails Chrysler’s 300 but matches the Avalon for overall spaciousness. Large door openings make entry/exit a breeze.

Despite a large trunk opening, its lid hinges intrude on cargo space. Small rear-seat pass-through is a poor substitute for folding seatbacks. The two-tier console is handy, but smallish map pockets and glovebox provide only adequate interior storage.