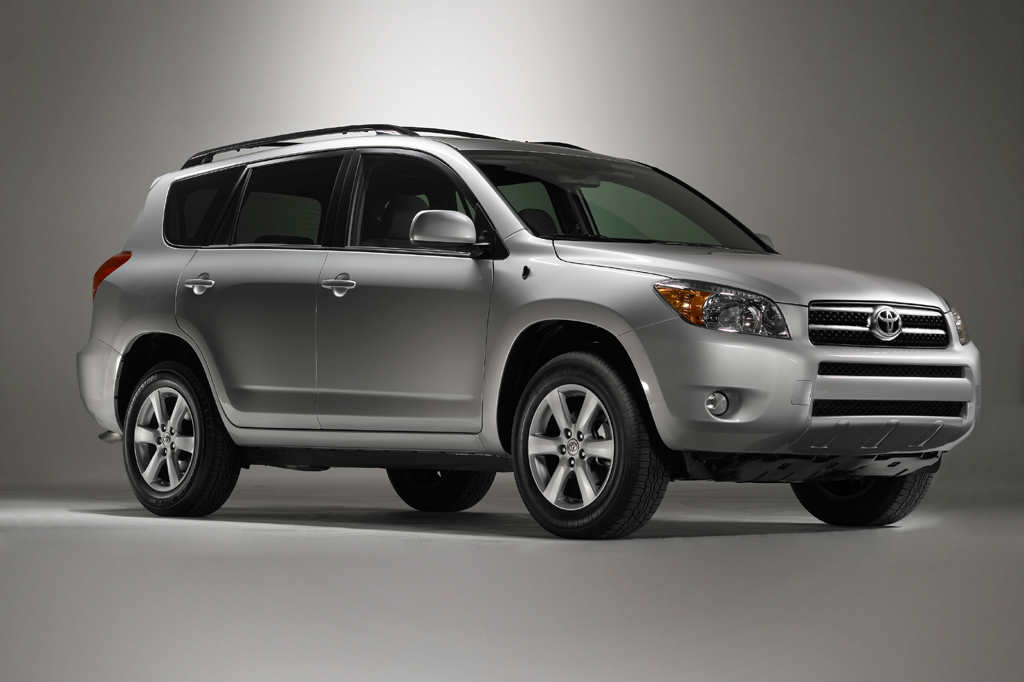 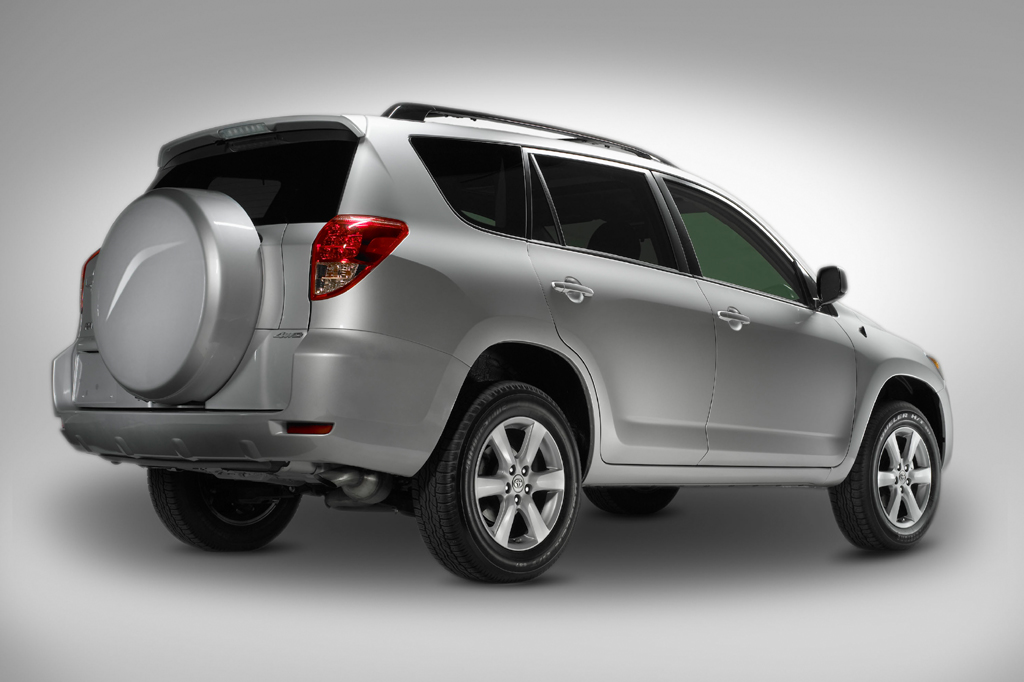 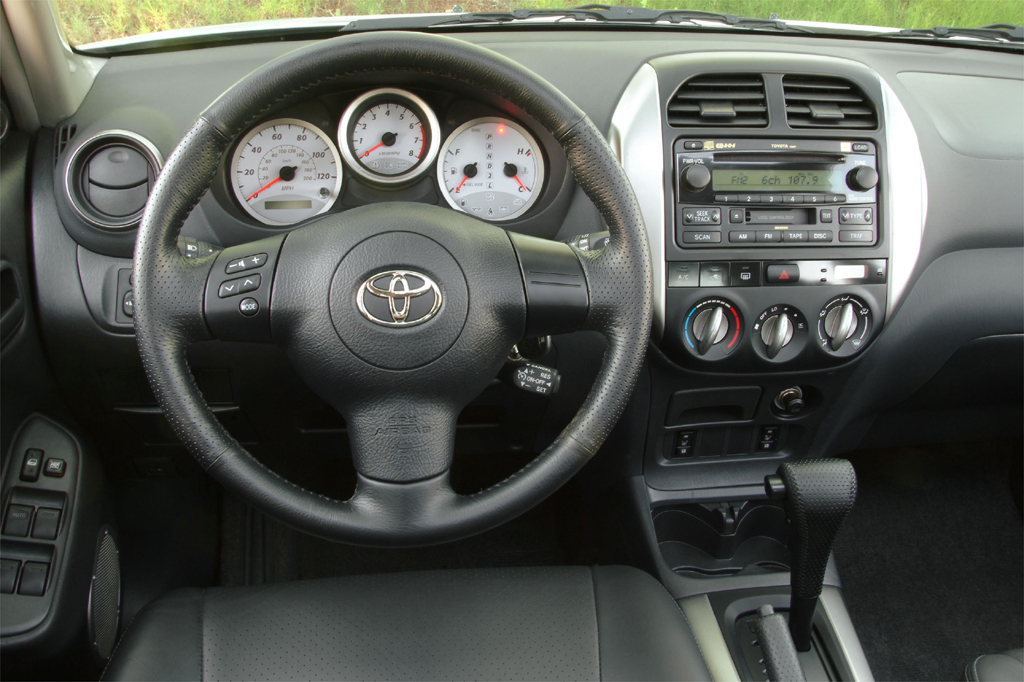 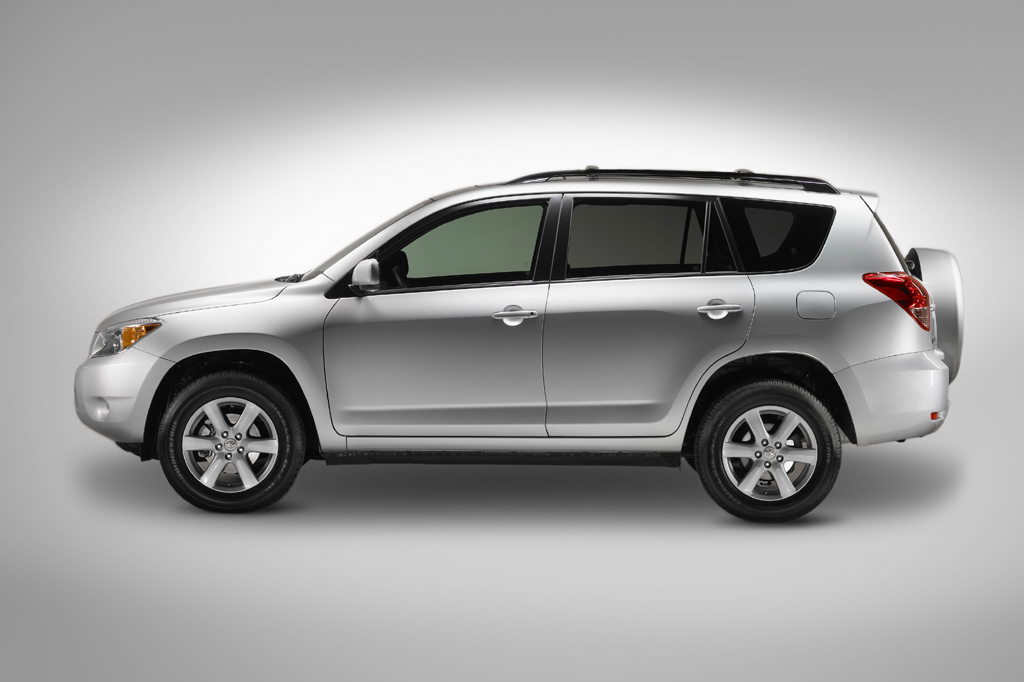 Available with the most powerful engine is the compact-SUV class and seating for seven, augmented by impressive cargo room, refinement, ergonomics, and road manners, RAV4 is simply a standout. Toyota’s reputation for reliability is another asset, but strong resale value keeps secondhand prices quite high. Addition of V6 power was a welcome improvement, and the optional third-row seat is a compact-SUV first.

Toyota redesigned its compact sport-utility vehicle for 2006, with new styling, up to 269 horsepower, and available third-row seating. That change made it the only seven-passenger vehicle in its class. Compared to the prior generation, the 2006 version gained 6.7 inches in wheelbase, 14.5 inches overall, and measured 3.2 inches wider.

The new RAV4 came in base, Sport, and Limited models. Each was available with front-wheel drive or all-wheel drive. The AWD system did not include low-range gearing, but could be locked into a 55/45 front/rear torque split.

A 2.4-liter four-cylinder engine continued, now rated at 166 horsepower versus the previous 161. Available for the first time was a V6 engine: a 3.5-liter producing 269 horsepower. Both engines came only with an automatic transmission; a four-speed with the four-cylinder, and a five-speed with the V6.

Base four-cylinder RAV4s had 16- or 17-inch wheels, while V6s had 17s. The Sport had 18-inch wheels, a sport suspension, and unique trim.

Available on all models were front side airbags and head-protecting side airbags that covered the first two seating rows and included rollover deployment. Standard seating was for five occupants. Base and Limited models could seat seven via a two-place third-row seat that folded flush with the cargo floor. The folding second-row bench was split 60/40, moved fore/aft to adjust legroom, and included a reclining seatback.

Three gas engines have been offered for the RAV4: a 166-horsepower four-cylinder with a four-speed automatic transmission, and a 269-horsepower 3.5-liter V6 with five-speed automatic. All-wheel drive was available with either engine. For 2010, a 179-hp 2.5-liter 4-cylinder replaced a 166-hp 2.4-liter four as the base engine. For 2012, an all-electric version of the RAV4 was made available. It carried a 154-hp electric motor mated to a single-speed transmission and came only with front-wheel drive.

Acceleration is directly related to engine choice. A four-cylinder RAV4 is sluggish from a stop, though adequate for around-town driving, but lacks power in hilly terrain. Impressively strong in any situation, the V6 version provides plenty of reserve passing power. A test AWD Limited accelerated to 60 mph in 6.7 seconds. One test RAV4 suffered touchy throttle action and jerky low-speed shifts. The new-for-2012 all-electric RAV4 EV is surprisingly strong from a stop, with impressive throttle response at any speed.

Fuel economy is appealing for an SUV, though real-world driving with V6 power trails the EPA estimates of 24-mpg city/29-mpg highway with front-drive, 23/27 with AWD. A test 2WD Limited model averaged 25.3 in mostly highway driving. AWD V6s have averaged 20.8 to 22.8 mpg overall. Toyota recommends regular-grade fuel. The RAV4 EV has an estimated range of about 100 miles. In most other areas of performance and accommodations, it is nearly identical to its gas-powered siblings.

Ride quality ranks as good for a small SUV, thanks in part to one of the longest wheelbases in this class. Test models with 17-inch tires have showed little impact harshness on sharp bumps and ridges, and only mild jitter on some washboard surfaces. A Sport version with 18-inch rubber is not noticeably harsher.

Wind and road noise are nicely muted, although test RAV4s have suffered minor wind rush from the windshield base. The Sport’s 18-inch tires are somewhat noisy on coarse pavement, but never annoying. Both engines run smoothly, but the four-cylinder is noticeably louder in rapid acceleration and highway-speed cruising.

Controls are generally easy to locate and simple to use. Gauges have large, legible markings. The stalk-mounted cruise-control lever requires unconventional up/down motions for engagement and setting. Some testers have complained that stalk placement is too near the steering wheel, crowding hands. Cabin materials are generally solid and attractive, lending an upscale feel. Some elements may disappoint, however, including a flimsy glovebox lid and cheap-feeling headliner material. One test RAV4 suffered a loose driver’s sunvisor, flickering traction-control light, and a key that sometimes refused to release from the ignition after shutting off the engine.

Getting into and out of the front compartment is easy, and adults get ample head and legroom. Seats are firm, but comfortable. Long-legged drivers may want more rearward seat travel. Some testers said the seat needs more lumbar support; others called it over-bolstered. Visibility is compromised by wide rear roof pillars, but good otherwise. The external spare mounts low enough on the rear cargo door so it doesn’t interfere with the aft view. Some testers liked the low, close steering wheel, which tilts and telescopes; others criticized it for creating a “big rig” feel. The driver’s seat has a pump-handle height adjustor. Second-row passengers enjoy plenty of headroom, but taller occupants might prefer more toe and leg clearance. Entering the third row is difficult, requiring a high step-in, and access is only from the right side. The third-row seat is a convenience in a pinch, but only suitable for toddlers or young children.

Five-passenger RAV4s have an impressive amount of cargo room behind the second row, plus convenient storage areas in the floorwell. Seven-seaters have more space than expected behind the third row, which folds fully to create a flat load floor. Lightweight split-rear-seat sections are easy to flip/fold. Curbside loading is complicated by a cargo door hinged on the passenger side, with no separate-opening glass. Impressive passenger-compartment storage includes a bi-level glovebox.