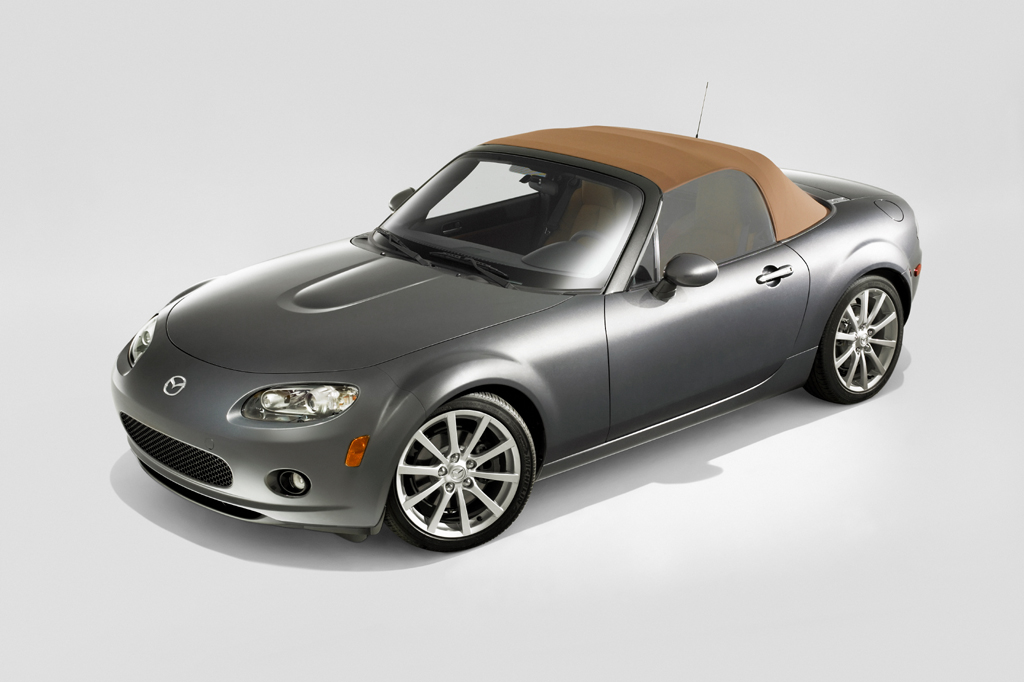 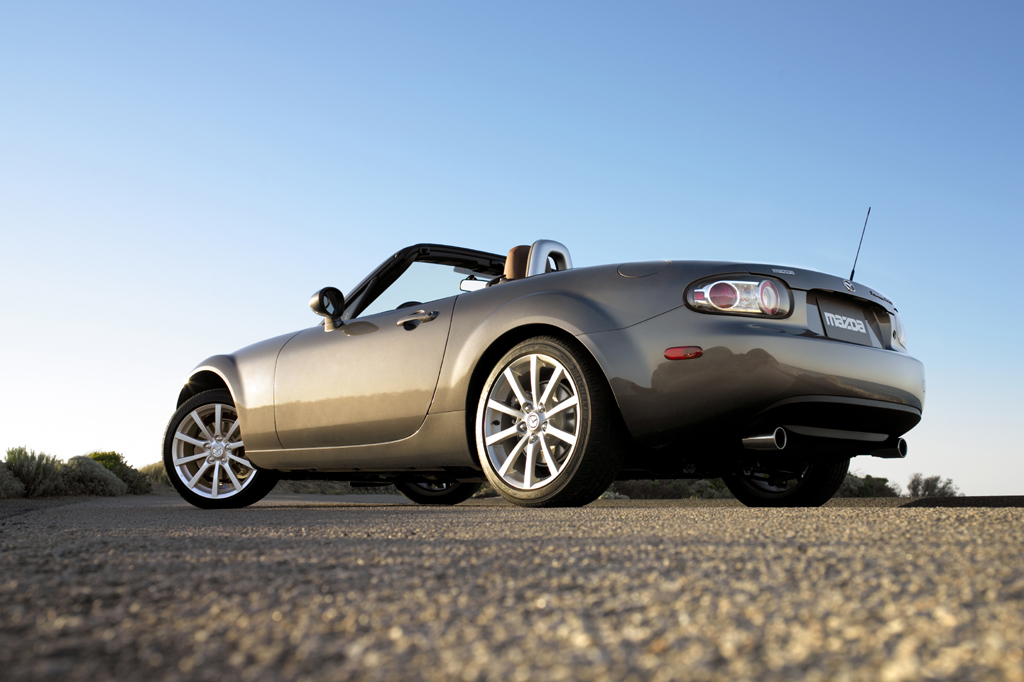 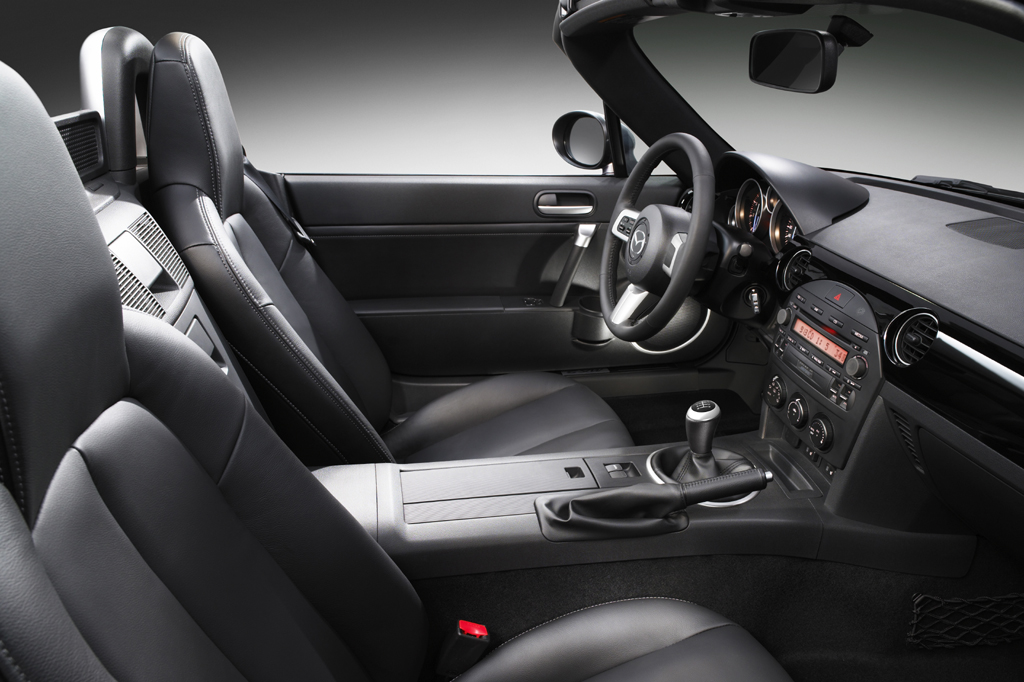 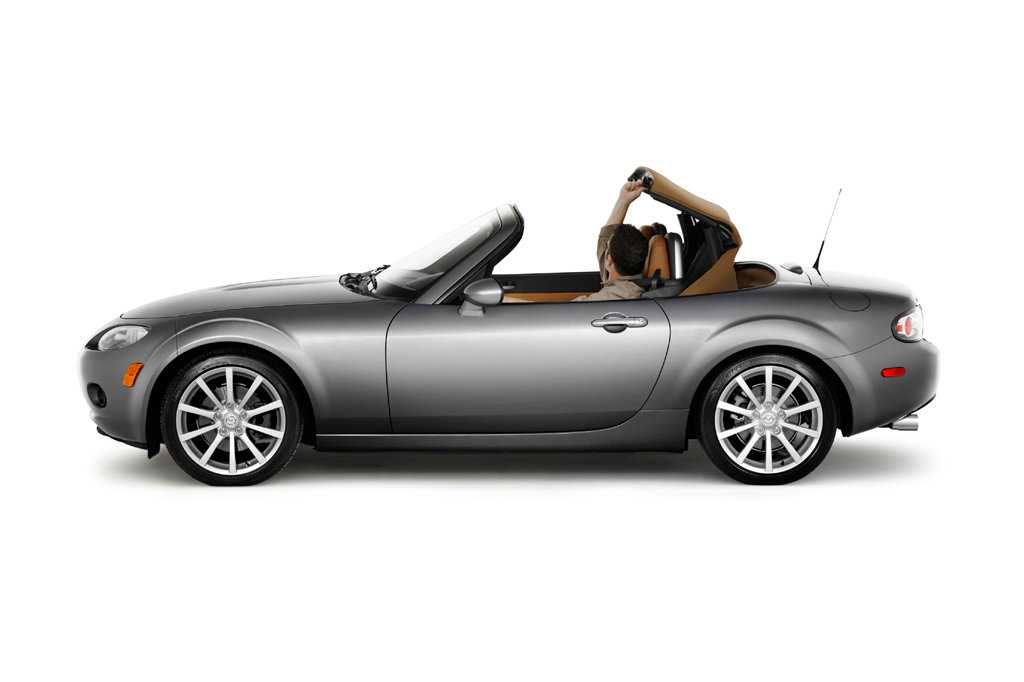 For better or worse, Mazda’s 2006 redesign traded a little bit of this two-seater’s lithe nature for a more masculine bearing. In the bargain, it gained power and safety features at new-car prices starting well below the prior version. As always, the current MX-5 delivers as much driving pleasure–if not outright power–as two-seat sports cars costing thousands more. Mazda manages to combine open-air fun with surprising practicality, including a remarkably well-engineered retractable hardtop. Beware, though: Strong resale values keep secondhand prices high.

Mazda redesigned its popular two-door sports car for 2006, but retained four-cylinder power and the general design that had helped make Miata the best-selling two-passenger convertible in the world. The U.S. version of this third-generation Miata adopted the MX-5 model name, as used on the car in other markets since its 1990 introduction.

Side airbags designed to protect both head and torso were standard; So were antilock four-wheel disc brakes. Traction control, antiskid system, and sport suspension were available.

MX-5 came with a manual-folding soft top, with a heated glass rear window; a removable hardtop was optional. Sport, Grand Touring, and 3rd-Generation Limited have 17-inch wheels; others were 16-inch. The 3rd-Generation Limited came with a sport suspension, satellite radio, xenon headlights, and special trim. Mazda had few true competitors for the MX-5, apart from the more costly Honda S2000 and the new Pontiac Solstice–plus its coming-soon 2007 counterpart, the new Saturn Sky.

All MX-5 models used a 2.0-liter four-cylinder engine, which made 170 horsepower with the standard manual shift and 166 hp with an automatic transmission. In 2006, a five-speed manual was standard on Club Spec, base, and Touring; six-speed on the others. For 2007, SV and Sport models got the five-speed; others kept the six-speed manual. Available for all except the SV, the six-speed automatic included paddle shifters.

Acceleration is brisk from all speeds, with satisfying low-rpm response. Mazda’s six-speed manual transmission has short throws, but must be shifted with authority. The responsive automatic transmission boasts user-friendly paddle shifts, and blunts power only slightly.

Fuel economy also is appealing. Test MX-5s averaged 21.3 to 23.8 mpg with a six-speed manual transmission, and 23.4 mpg with automatic. Mazda recommends premium-grade fuel for the MX-5.

Ride comfort is appropriately firm with the base suspension, but not uncomfortable. Frequent choppy motions occur on uneven pavement, bordering on harshness, with the less-compliant combination of Suspension Package and 17-inch tires. The Club’s sport suspension was also optional for Grand Touring models. unfortunately the stiff set up made the ride choppy and brittle.

Steering is rewardingly quick and precise, though some testers find it unnecessarily heavy at low to moderate speeds. With 17-inch tires, sharp bumps trigger steering deflection, detracting from control and straightline tracking. An MX-5 easily conquers corners and exhibits little lean, though some testers say the tail tends to swing wide too early in fast turns. The added weight of the retractable hardtop isn’t noticeable. Expect fine stopping power and control.

Road noise is prominent with the top up, accompanied by marked tire thrum. With the top down, normal conversation is easy at 60 mph. Mazda’s engine has a nice performance tone. The exhaust note trumpets sports-car personality, but some testers considered both sounds too loud and tiresome. Hardtop models suffer less wind and traffic noise.

Gauges are clearly marked and easy to read, and controls are well placed. Hard plastic surfaces dominate the interior, but don’t look cheap. Club models include a body-color panel on the dashboard that lends an extra bit of sportiness. Available leather trim, standard in the Grand Touring model, dresses up the cockpit.

Drivers well over six feet tall may long for more leg room, and also feel confined with the top up. Those under five-foot-six or so may have trouble seeing over the high instrument panel. Most occupants are likely to complain of intrusion from the unpadded cupholders molded into front door panels. Seats support well in turns, but seem thin on padding. Top-up blind spots hinder lane changes. The fabric top lowers easily, but weight and construction make raising it while seated a little awkward for some users. The retractable hardtop lowers at the touch of a single button.

Careful packing is needed to squeeze much luggage into the small trunk. In-cabin storage space is minimal, too. A secondary set of cupholders, located in the center console, may interfere with the gearshift when in use.