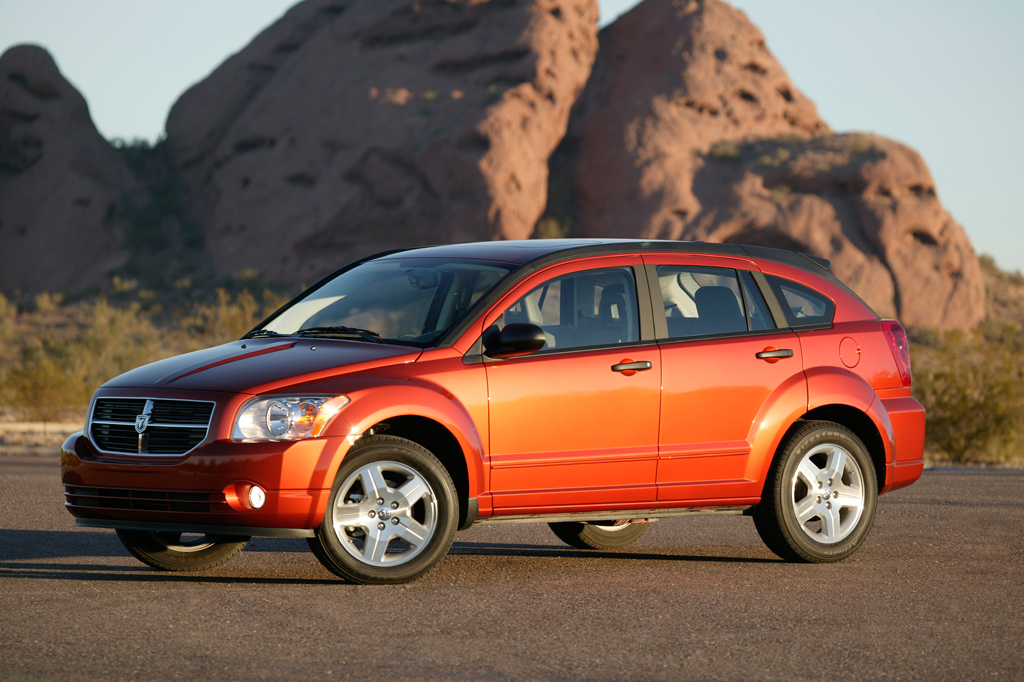 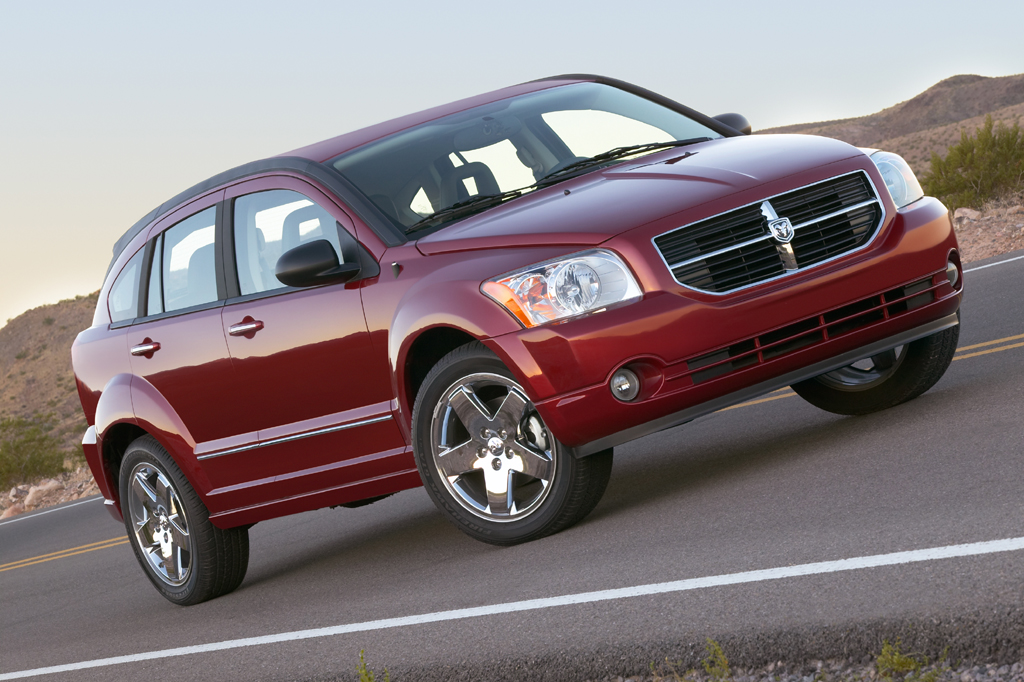 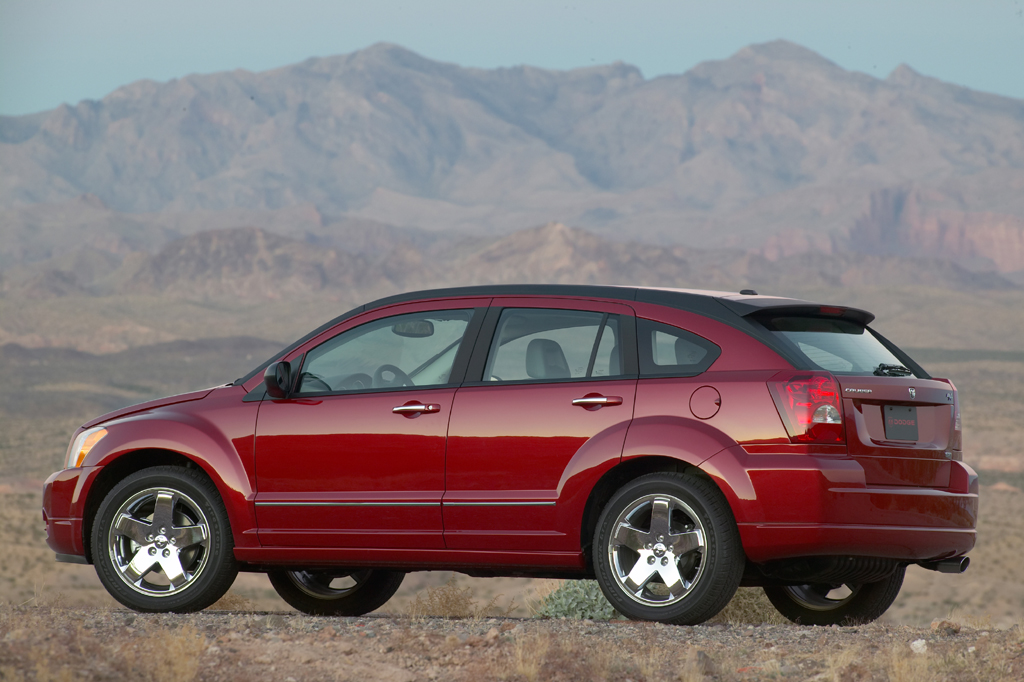 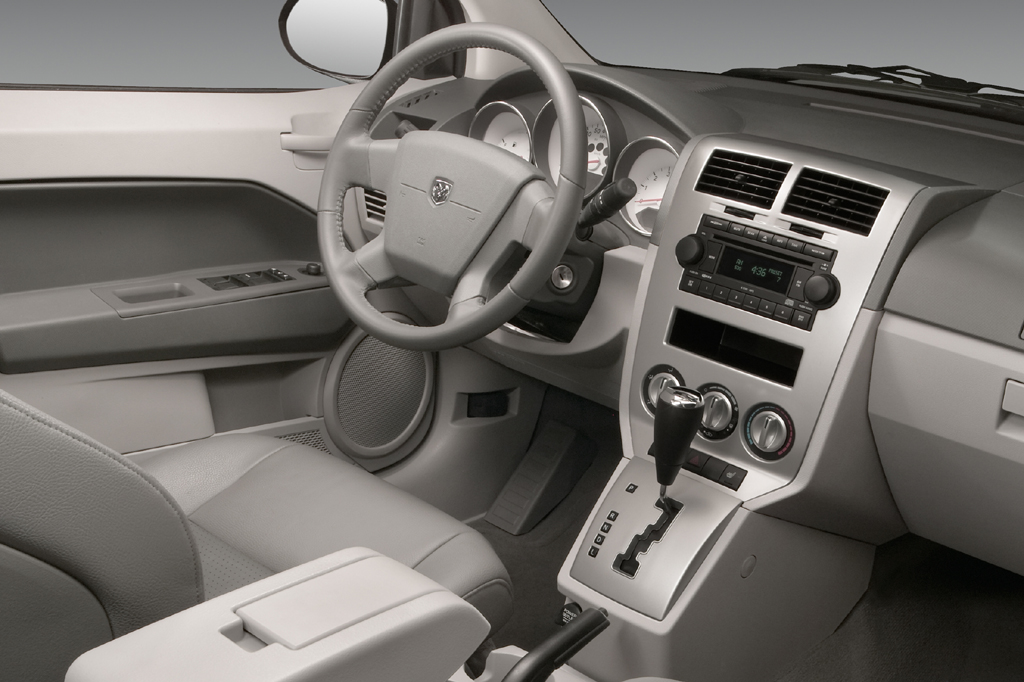 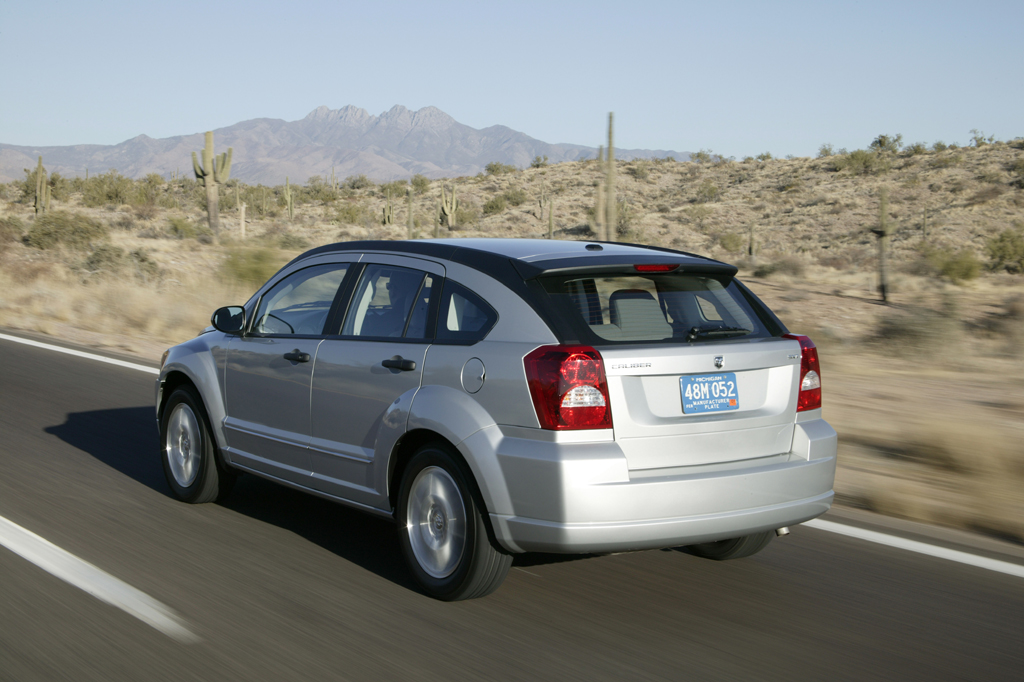 Like the similar-concept Toyota Matrix and Pontiac Vibe, Caliber boasts a different look and greater utility than the traditional compact station wagon. Noisy, weak engines on most versions are drawbacks, and the budget-grade cabin decor wins no prizes. Against those demerits, count available all-wheel drive, smart packaging, and some clever convenience features. SRT4 promises the most go-power and was priced reasonably when new. On the down side, it’s far less refined than such “hot hatchbacks” as the MazdaSpeed 3 and Volkswagen GTI.

Dodge’s new entry-level vehicle for 2007 was a compact five-passenger, four-door wagon, available with front- or all-wheel drive. Caliber replaced the long-lived Neon sedan and was about as long overall, but 4.5 inches taller. It had a liftgate and split-folding rear seats. Competitors included the Mazda 3, Nissan Versa, and Pontiac Vibe, as well as the retro-styled Chevrolet HHR.

SE, SXT, and R/T models were offered. All used a four-cylinder engine, but three engine sizes were available. SE and SXT models had front-wheel drive and a 148-horsepower, 1.8-liter engine (with manual transmission). The optional 2.0-liter developed 158 horsepower. Caliber R/T wagons came with either front-drive or all-wheel drive, powered by a 172-hp 2.4-liter engine. The 1.8-liter engine teamed with a five-speed manual gearbox, while the 2.0-liter worked with a continuously variable transmission (CVT), which contained no conventional gears. R/T Calibers came with either transmission. AutoStick for manually-selected gear changes was an option for automatic R/Ts.

Antilock braking was optional on SE and SXT models, and standard on the R/T, where it came with rear disc brakes instead of drums. R/T wagons had a sport suspension and unique trim. Traction/antiskid control and front side airbags were optional. All Calibers had curtain side airbags and a driver’s knee airbag.

For a compact car, Caliber has had a bewildering array of four-cylinder engine choices, even excluding the turbocharged SRT4 edition. That 285-horsepower 2.4-liter came only with a six-speed manual gearbox, and was dropped for 2010. Other engines mate with either a five-speed manual gearbox or a gearless, continuously variable transmission (CVT). Non-SRT4 engines came in three sizes: 1.8-, 2.0-, or 2.4-liter. Manual-shift Calibers got the 1.8-liter; CVT models, the 2.0-liter. Caliber R/Ts used a 172-hp 2.4-liter engine, with either manual shift or the CVT. All-wheel drive was available on the R/T model until 2009. The 2010 Dodge Caliber lineup lost its high-performance SRT4 variant.

Acceleration with regular Calibers is adequate at best, regardless of powertrain. A test manual-transmission SE took 9.8 seconds to reach 60 mph. The manual transmission has required frequent shifting for best acceleration, and suffered slightly notchy action. In CVT-equipped models, throttle response is good around town but lackluster at highway speeds. One test SE suffered from ragged throttle response while the engine was warming up. It went away once the engine reached normal operating temperature. AWD R/Ts feel especially sluggish. As expected, SRT4 is the exception. Dodge claimed the SRT4 could accelerate to 60 mph in under 6 seconds, but it doesn’t feel quite that quick. Also, an SRT4 needs high engine rpm for best acceleration, and some turbo lag interrupts the power flow.

Fuel economy scores high. A test manual-shift SE averaged 21.9 mpg in driving that included gas-eating performance runs. An SXT with the CVT averaged 24.8 mpg, and an AWD R/T averaged 23.3 mpg. An extended-use SXT with the CVT managed an average of 25.2 mpg. Even the SRT4 has proven relatively frugal, averaging 21 mpg. Calibers use regular-grade fuel, except for the SRT4, for which premium is recommended.

Ride quality could be better. A Caliber SE is busy with poor bump absorption, resulting in minor vibrations felt through the steering wheel and gas pedal. SXT and R/T models are more compliant overall, but still a bit jittery over broken pavement. Stiffest of all is the SRT4, though its suspension is never unyielding.

Handling traits vary with the model. An SE exhibits moderate body lean while cornering, but its modest-sized tires squeal early in fast turns. The SXT’s larger tires quell cornering noise and improve traction. Steering is nicely weighted, but somewhat dull in road feel. Brakes have good pedal feel. An AWD R/T scores better on all counts, with slightly less body lean, sharper steering response, and firmer brake-pedal feel. Best-handling of the lot is the SRT4, despite lack of all-wheel drive. Even so, SRT4 traction in quick starts and aggressive cornering ranks as subpar among other sporty compact cars.

Wind rush is moderate, but Calibers suffer mediocre suppression of road noise. Engines intrude during acceleration-especially the SRT4’s turbo. The 158-hp version is the quietest overall, but that’s not saying much. Tire noise is also much louder in the SRT4.

Large gauges are easy to read. Most models have a large speedometer in the center of the instrument cluster, but the SRT4 puts a tachometer there and moves the speedometer to a smaller dial at the right. That makes its speedometer tougher to read at a glance. Large, simple audio and climate controls are within easy reach, though the manual transmission’s shift lever can block access to climate dials. Available fold-down speakers in the liftgate, if installed, are a plus for picnics. Test-drivers have been deeply split over cabin decor. Hard plastics prevail, and come off as price-appropriate to some testers, but low-rent objectionable to most. Not a single padded surface can be found. The SRT4 has a slightly dressier cabin with better detail work, though it still trails the MazdaSpeed 3 and Volkswagen GTI by a wide margin. Inside an extended-use SXT, colors of the plastic panels were not uniform, further cheapening interior appearance.

Front riders get ample head- and legroom, but cloth seats lack lumbar adjustment and are short on lower-back support. The height-adjustable driver’s seat aids driver positioning, but has been unavailable on SE models. The center console’s armrest slides fore and aft, and the cover flips to reveal built-in holder for a cell phone or MP3 player, though it interferes with the manual gearbox’s shift lever. Thick roof pillars restrict outward visibility to all directions, especially to rear corners. Entry and exit can be a battle for six-footers. The SRT4 has leather-trimmed sport buckets with prominent side bolsters. While they’re more supportive, those bolsters can make it tough to shift smoothly. Seats are also thick enough to constrict access to levers for height and lumbar adjustments.

Decent backseat headroom is matched by great foot space. Legroom is acceptable for those under 6-feet tall, even with front seats nearly fully aft. Unfortunately, the back seat is uncomfortably soft and flat. The seatback reclines on SXT and R/T models. Narrow door openings make it hard to get out of the rear compartment.

Caliber’s cargo area is larger than that of typical hatchbacks, but smaller than some compact wagons. The removable plastic load floor is easy to clean, but allows objects to slide around. When open, the liftgate won’t clear a 6-footer’s head. Split rear seatbacks are easy to fold, but don’t lay flat if the front seat is all the way back. Small-item storage is impressive, thanks to a large two-tier glovebox and moderate-size console box, though door map pockets are too small to be really useful. Air-conditioned models include a chilled glovebox compartment.