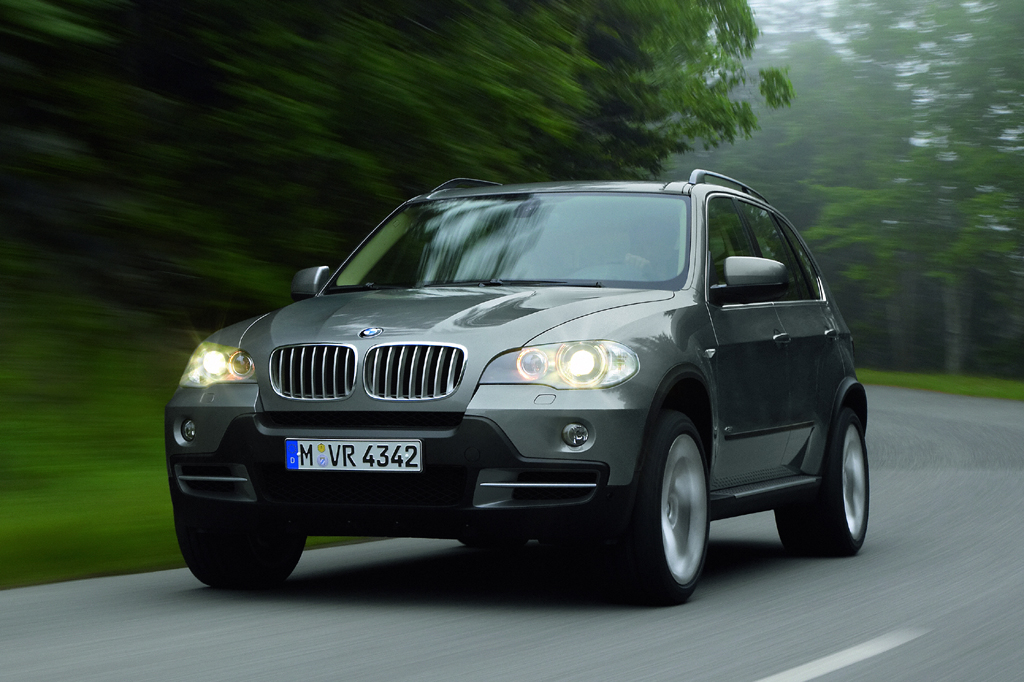 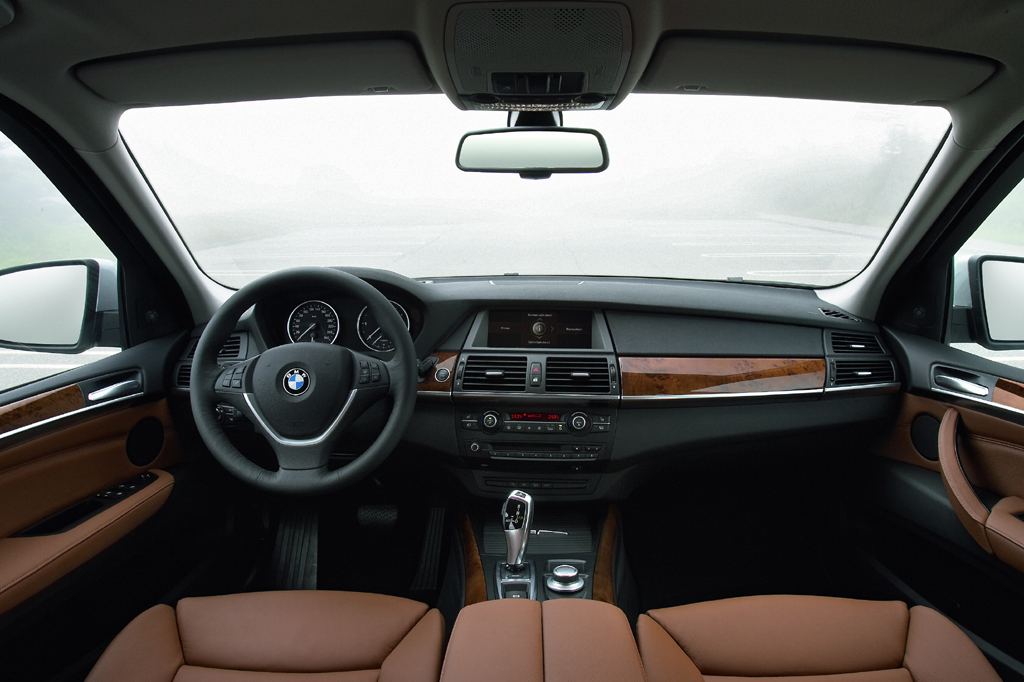 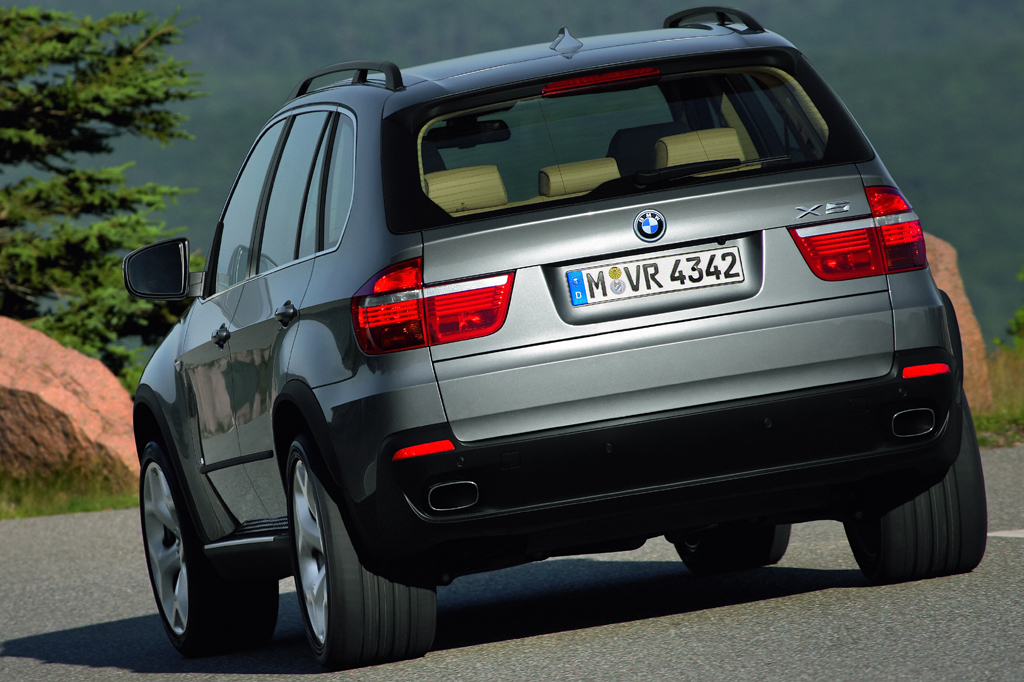 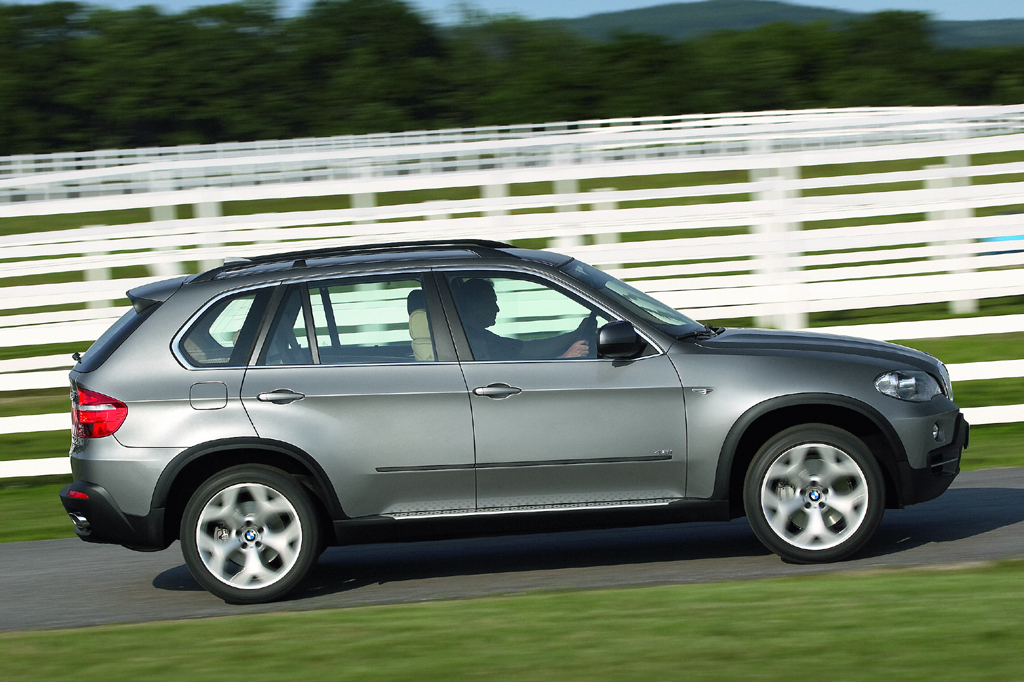 BMW’s X5 excels for its fine balance of ride quality and sporty handling. Credit BMW for simplifying key functions in its iDrive control system, inducing less frustration than systems in some other models. However, the navigation system is confounding, the available third-row seat is a mere token gesture, and X5s have been pricey when new, particularly in V8 form. That price premium has been partially offset by strong resale values-which is not necessarily good news for used-BMW buyers.

BMW redesigned the larger of its two sport-utility vehicles for 2007, making it bigger and adding the possibility of seven-passenger seating. Compared to the 2006 models, the 2007 X5 was 4.5 inches longer in wheelbase, 7.4 inches longer overall, 2.4 inches wider, and 2 inches taller. This premium midsize all-wheel-drive SUV was offered in two models. The 3.0si had a 260-horsepower inline six-cylinder engine, which replaced the 225-hp 3.0i. The 4.8i held a 350-horsepower, 4.8-liter V8, replacing the 315-hp 4.4i. Both came only with a six-speed automatic transmission.

Standard seating was for five, but an optional third-row seat expanded capacity to seven. Each X5 had all-wheel drive without low-range gearing, traction/antiskid control with rollover sensors, and hill descent control. Front side airbags were standard, as were curtain side airbags that covered the first two seating rows and included rollover deployment. All X5s had steering-linked xenon headlights and BMW’s iDrive that used a single knob to control entertainment, communication, navigation, and climate functions.

EPA Note: Figures shown are for 2008 models. The Environmental Protection Agency changed its procedure for 2008 to yield more realistic estimates. Therefore, estimated mileage is lower than for prior years.

We have not yet had an opportunity to drive the x35i or x50i. Earlier 3-liter sixes have more than adequate power for most needs. The 4.8 V8 is not fast off the line, but builds speed quickly for good high-speed response. BMW says the 4.8 can accelerate to 60 mph in 6.4 seconds, but it doesn’t feel that quick. Testers have complained about nonlinear throttle response, but not the V8’s smooth, strong power-especially for high-speed passing. X5 M is one of the most potent SUVs you can buy, and throttle response of its turbocharged 4.4-liter V8 is much more linear than that of the 4.8 V8. The 35d diesel nearly matches the 4.8 V8’s power, plus enjoys more direct throttle response. Regardless of engine, the transmission shifts smoothly with alert downshifts.

With the standard 18-inch tires, the ride is comfortable and controlled. The available Sport Package and 19-inch tires are borderline harsh, with much bounding over sharp bumps and jiggling over rough pavement. Despite its wide, high-performance 20-inch tires, X5 M is no more firm than other models equipped with the Sport Package. Indeed, some testers find the M has a better ride.

Though pleasantly quiet overall, some engine noise and coarse-surface tire thrum intrude on the X5 experience. The Sport Package’s 19-inch tires are not noticeably louder than the standard 18-inchers. BMW’s diesel is louder than competitors’ in acceleration, but fades into the background at cruising speeds.

Frequently-used audio and climate controls are thankfully separate from iDrive, but those functions governed by iDrive require a long look away from the road. Operation of the optional navigation system is a frustrating ordeal, with complex control and cryptic markings. Interior materials are a nice blend of durability and luxury, assembled with care. However, one test X5 had several squeaks and rattles in dashboard and rear-seat areas.

Front occupants enjoy great legroom, though taller drivers may be cramped for headroom beneath the sunroof’s housing. Seats with optional upgraded upholstery are harder and less comfortable than standard buckets. Adjustable thigh support is a comfort bonus, but some optional seats are overly firm. Rear headrests partially block the view astern, but visibility is good otherwise, aided by available front and rear obstacle detection (if installed). Some testers have complained that entry/exit was hindered by protruding lower door sills and small door openings.

When in use, the screen of the available DVD entertainment system rests atop the center console, which means elbows could bump against the raised screen. A lowered screen prevents the console lid from opening

Headroom is decent in the second row, but leg and knee space are unexceptional in five-passenger versions. Second-row seats recline on all X5s and slide fore/aft in seven-seat models, increasing leg space for those passengers. The third row suits kids only, and even they will be cramped unless the second-row seat is fully forward. Entry/exit to the third-row seat demands contortions.

With the third-row seat up, there’s enough room behind it for a row of grocery bags. When folded, space behind the second row is quite good. All seatbacks fold flat to further increase capacity. The X5’s liftgate has a clamshell design that creates a drop-down tailgate section. High liftover means the tailgate must be dropped to load even moderately sized items. Interior storage is nothing special.