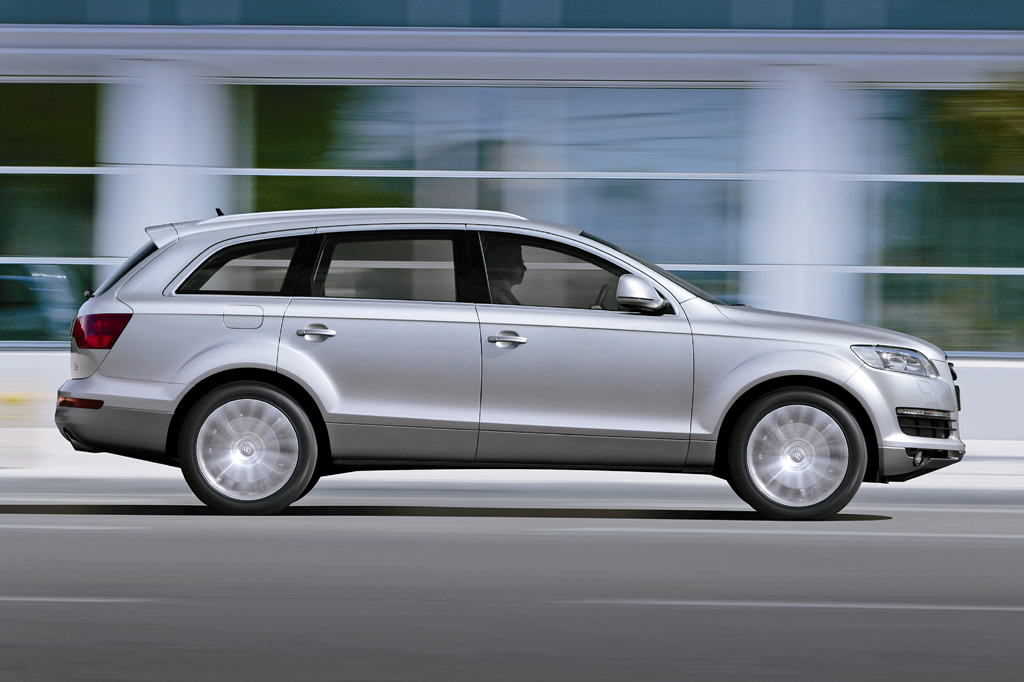 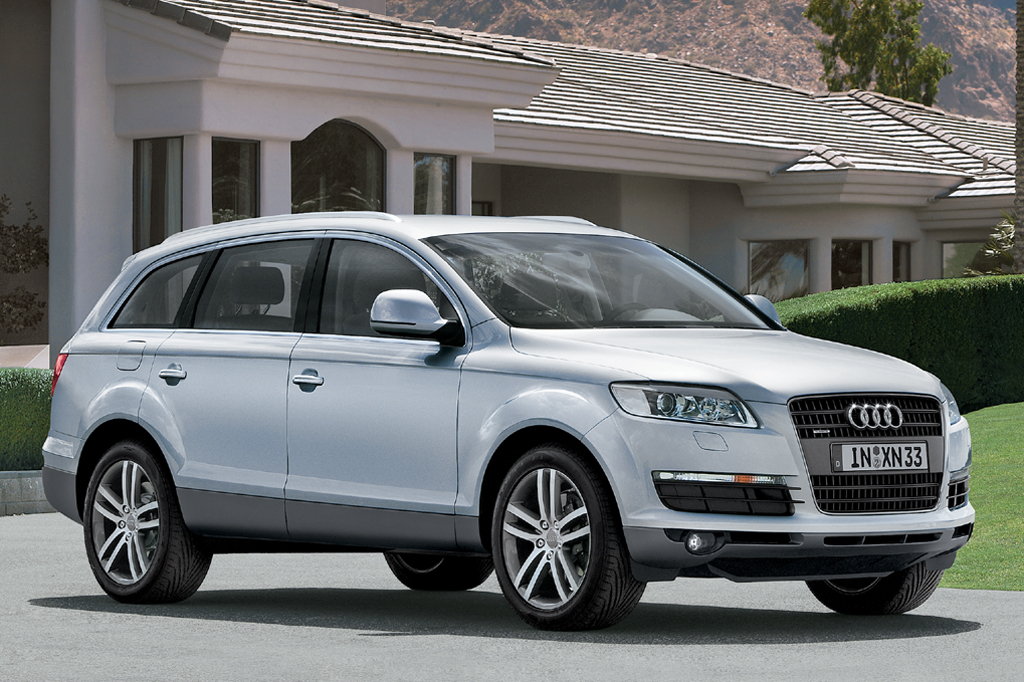 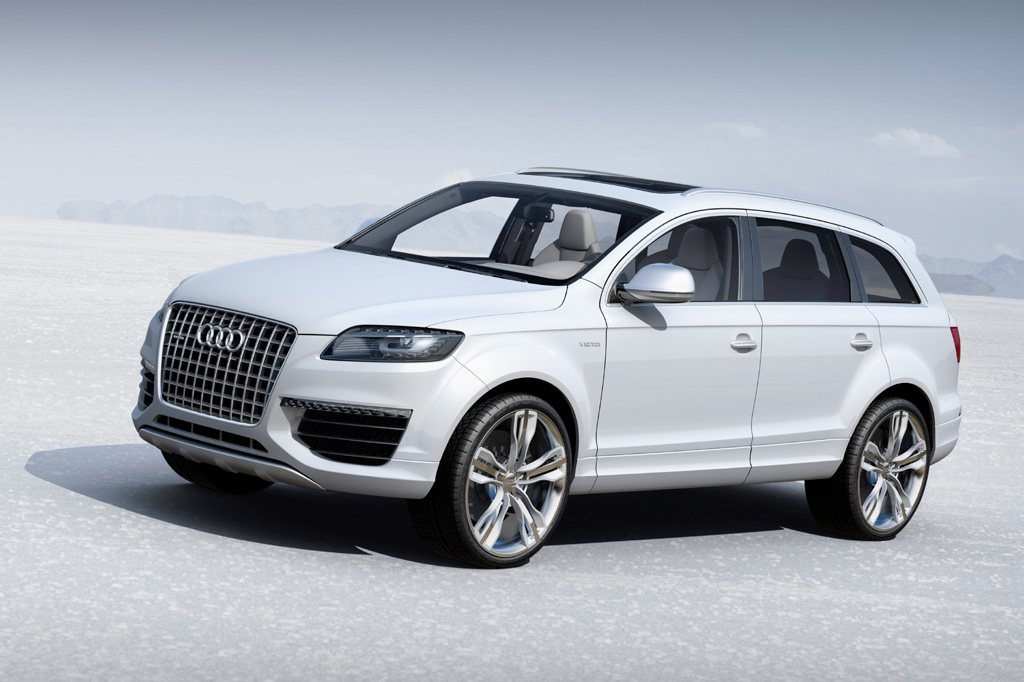 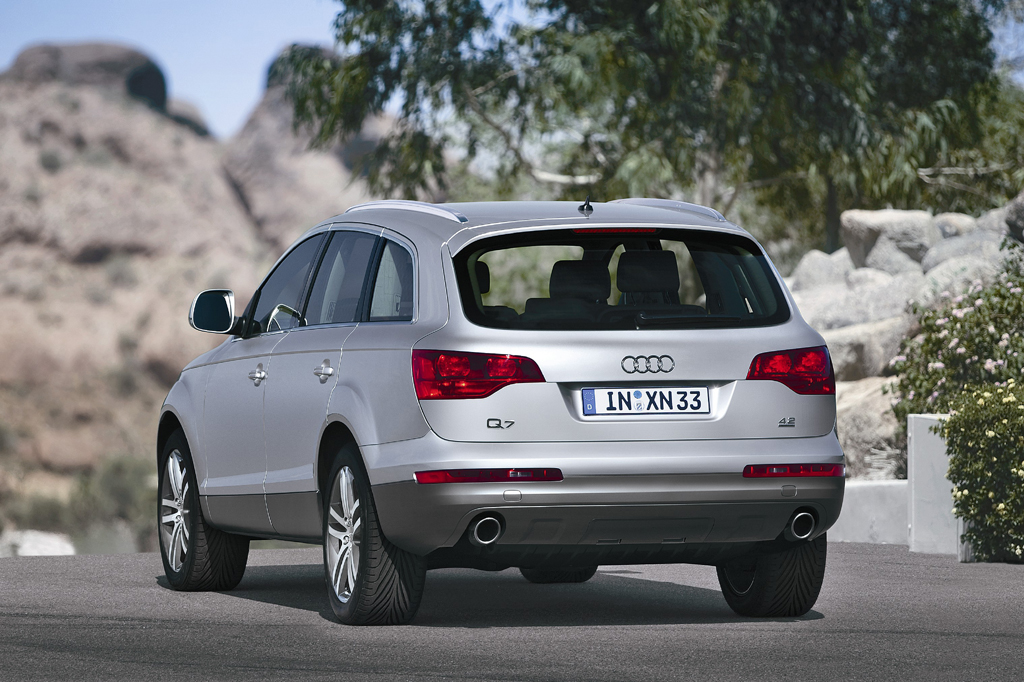 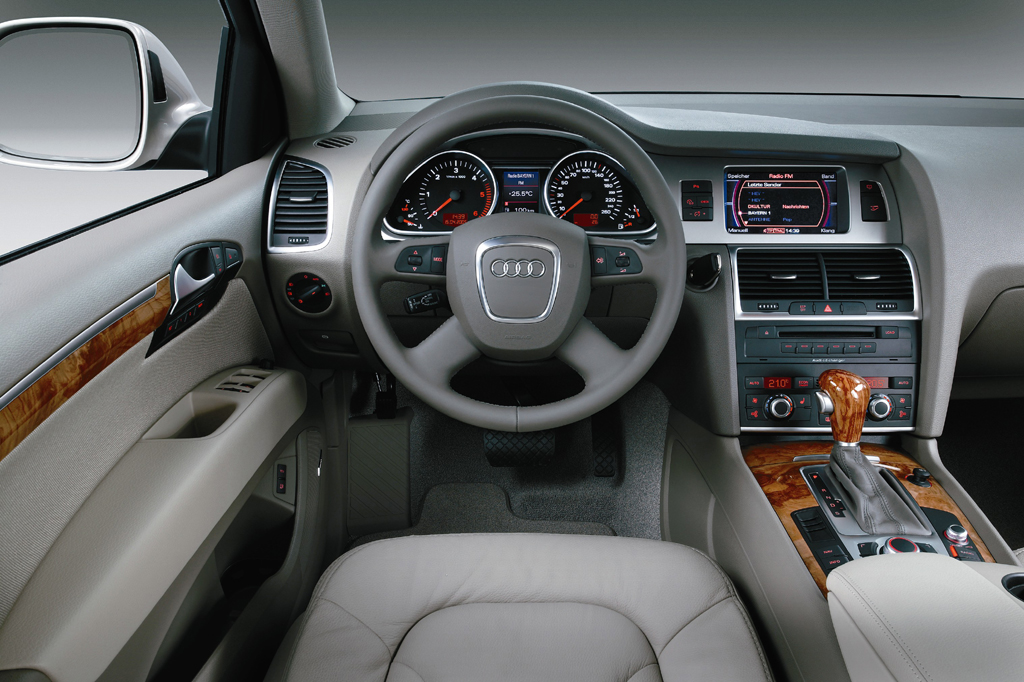 Recognizing that vehicles in this class are more about coddling occupants than carrying cargo, and need to make a style statement in the process, the Q7 fits the premium large SUV bill. Still, the Q7’s third-row room, comfort, and access are hostile to adults. Fuel economy with the 4.2-liter V8 is frightful. Even so, the Q7 earns our Recommended nod for mechanical finesse and terrific all-weather road manners. Audi design and workmanship also appeal.

Audi’s first sport-utility vehicle was loosely based on the Touareg from parent-company Volkswagen. Equipped with standard all-wheel drive, the Q7 differed from the VW Touareg in styling, equipment, and price. Larger in size, the Q7 seated up to seven, versus the Touareg’s five-passenger capacity. Rivals included the Cadillac Escalade and Mercedes-Benz GL-Class.

Two versions of the Q7 were offered: the 3.6 model with a 280-horsepower V6, and the 4.2 with a 350-horsepower V8. Both had a six-speed automatic transmission and Audi’s quattro all-wheel drive, without low-range gearing. In 2009 a turbodiesel engine was added. Antilock braking and traction/antiskid control with rollover sensors were standard. So were front side airbags and curtain side airbags for all seating rows. Second-row side airbags were optional, as were 20-inch wheels and a driver-adjustable air suspension with height control.

Each Q7 model came in base or Premium form. The 4.2 Premium added such conveniences as rear obstacle detection and four-zone automatic climate control. All Q7s included Audi’s MMI (Multi Media Interface). It used a dashboard screen and a console knob, and switches to set audio, navigation, suspension, and many other functions. Among available Q7 features were a voice-activated navigation system with rearview camera, adaptive cruise control, keyless entry and starting, and a three-panel sunroof. Also available was Audi’s Side Assist sensor system, which used flashing lights in the side mirrors to warn of vehicles in blind spots.

No 2011 models with the new 3.0-liter supercharged engine and eight-speed automatic have tested so far. In prior-year models, acceleration isn’t totally consistent. The 3.6s are pleasantly peppy in around-town driving, cruising with ease, but they need a deep stab of throttle for decent passing power at highway speeds. Audi claimed 0-60 mph acceleration in 8.2 seconds. Several testers found throttle response to be nonlinear. The 4.2s have slight delay in response from a rolling stop, but are strong enough otherwise to justify Audi’s claim of 7.0-second 0-60 mph acceleration. On both, the transmission is generally responsive, even velvety and alert, enhanced by convenient steering-wheel shift paddles in the sporty S line package. Maximum towing capacity is 6600 pounds.

Best results in ride comfort come from leaving the optional driver-adjustable air suspension in “automatic” mode, where it quells pitch and float on wavy surfaces and smothers most bumps with little thumping-even on available 20-inch tires. Even in Comfort mode, however, ride quality does not qualify as gentle when the pavement turns rough.

More agile and carlike than most large SUVs, the Q7 exhibits rock-solid straightline tracking. Still, the elevated stance and high weight demand slowing for tight corners, despite modest body lean versus others in its class. Steering is firm and slop-free at highway speeds, and usefully light for parking. But some testers have insisted that the turning circle was too wide. Braking is swift, smooth, and undramatic, but several testers found them hard to modulate for smooth stops.

Inside the Q7, the dashboard and center console are loaded with buttons and switches, despite the aim of the MMI system to reduce such clutter. The MMI system thoughtfully leaves routine climate adjustments to separate controls, but it absorbs most audio functions, rendering many of them distracting and time-consuming. Interacting with MMI for navigation and vehicle-system settings also takes time. First-rate finish and furnishings help justify luxury-level Q7 pricing.

Legroom is fine up front, but some taller testers declared head space just adequate for six-footers. Firm seats are long-haul comfortable and have a multitude of adjustments. Power-adjustable pedals have been unavailable, but a tilt/telescopic steering column (powered on 4.2 models) has been standard. The sunroof’s powered interior shade is mesh, not opaque, so some sunlight will always get through. Thick roofline pillars impede views to some corners and dead-astern, though the optional rearview camera (if installed) compensates. Step-in is a bit high, but manageable.

Passengers entering the backseat face the same slightly steep step-in, but wide doors give easy access to the second row’s ample leg space and acceptable headroom. Outboard sections of the firm 40/20/40 split bench slide fore/aft to favor passenger or cargo space, but the seat itself is a tad cramped for three adults. Twin bucket seats have been optional. Access to the 50/50 split third-row bench is a squeeze even for kids, as is space back there.

Cargo volume trails some rivals. Audi lists 11 cubic feet behind the third-row seat, 42 with it stowed, and 72.5 cubic feet with all rear seats down. The last figure is mediocre for this class, explained by a high cargo floor and low roofline. Still, the load floor is flat with any seats folded, and headrests don’t need to be removed. Erecting the folded third-row seats demands a long stretch from the tail or rear side doors. Plentiful cabin storage is provided for cups, bottles, and miscellaneous items.