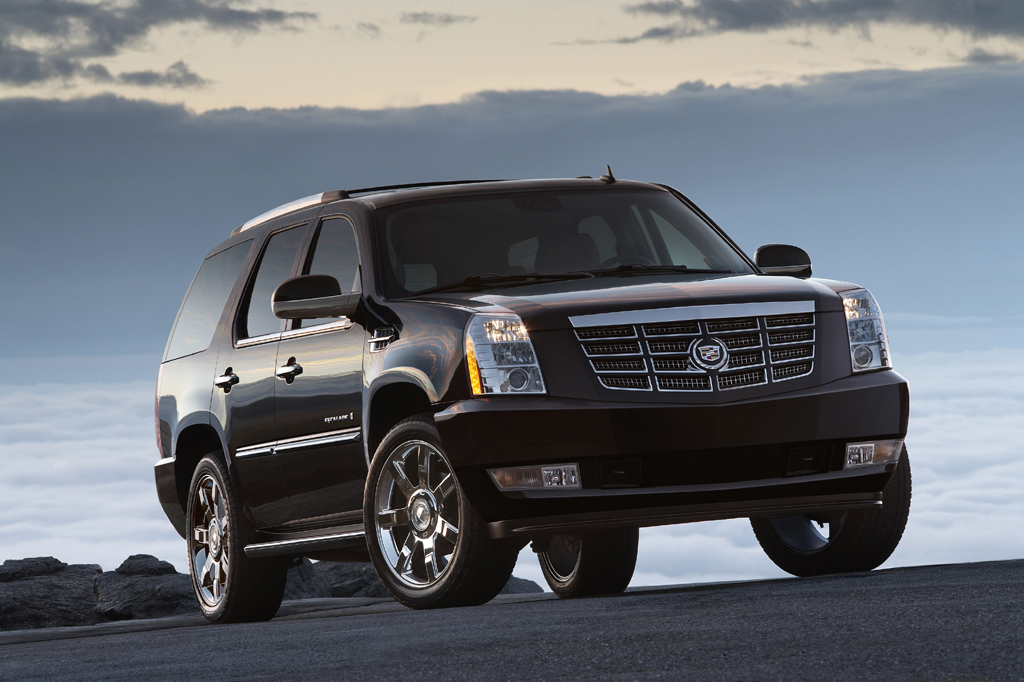 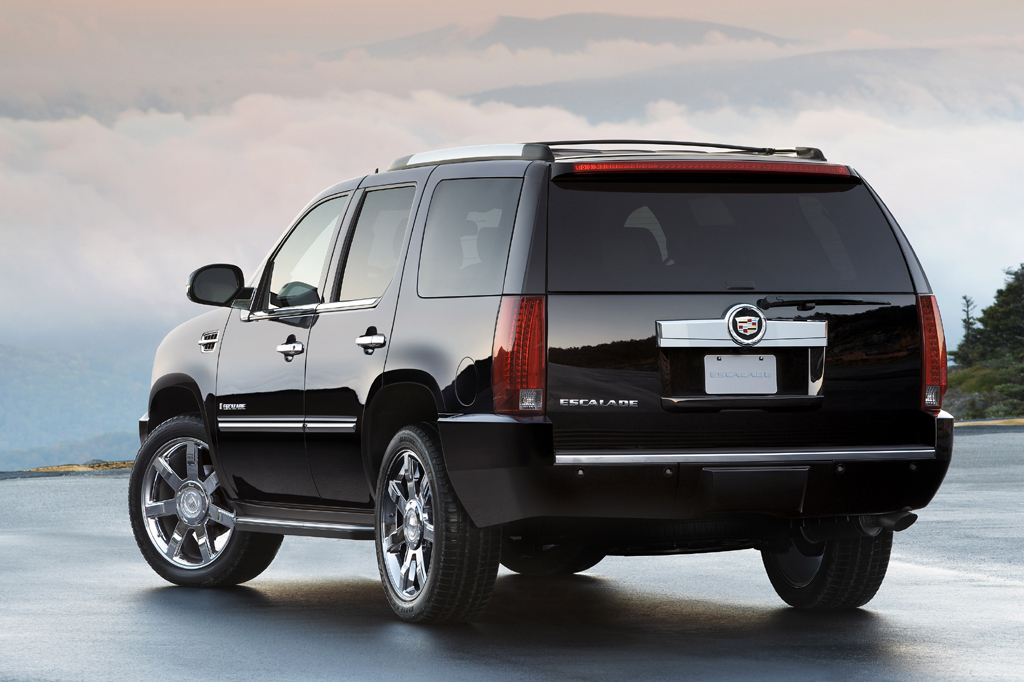 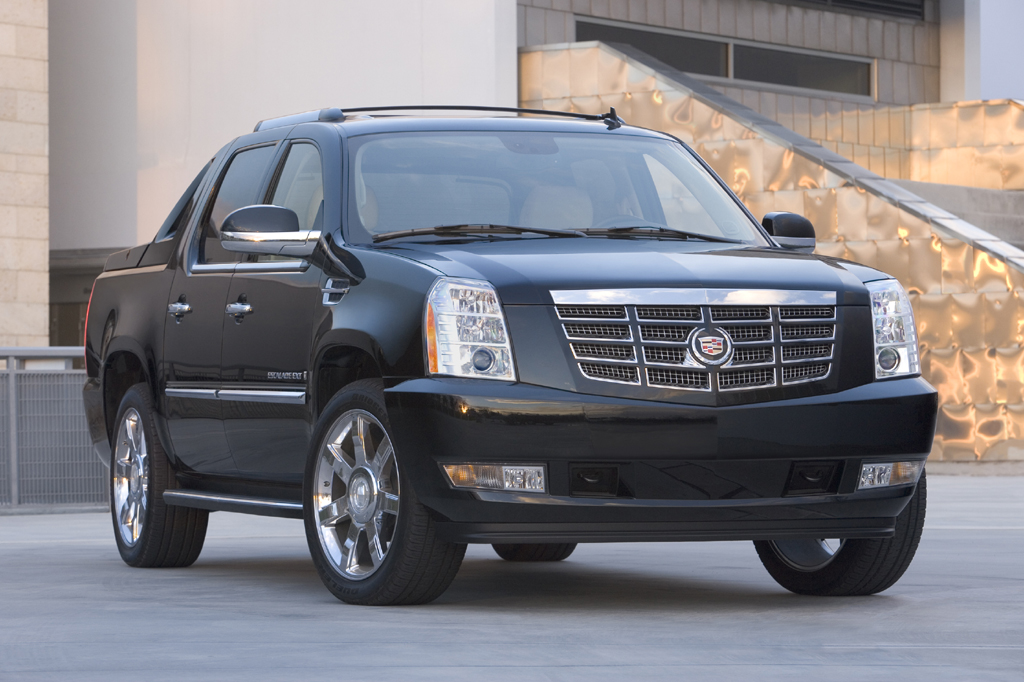 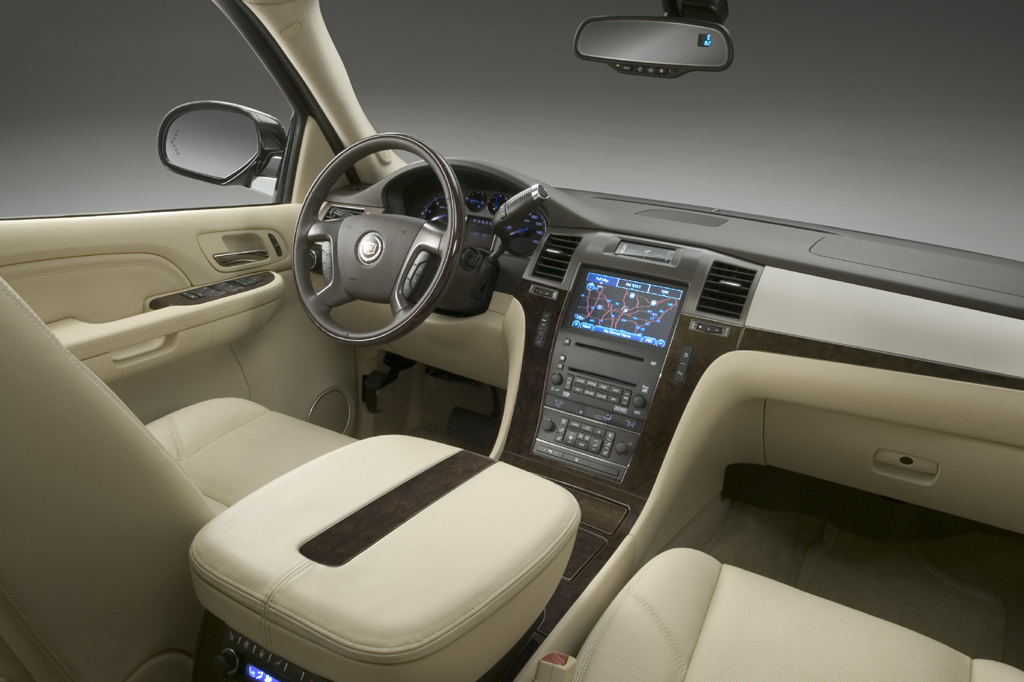 Escalade wagons are basically GMC Yukon Denalis with Cadillac looks, a pinch more power, extra standard features-and higher prices when new. All of GM’s redesigned-for-2007 large SUVs are strong competitors in their market segments. Although Escalade wagons may not be worth every penny of their extra cost over GMC’s Denali, they represent good value compared with other premium large SUVs.

Cadillac’s truck-type sport-utility vehicle was redesigned for 2007 with more power, fresh styling, and new features. Escalade wagons were basically premium editions of General Motors’ full-size Chevrolet Tahoe and GMC Yukon, while the Escalade EXT crew-cab pickup was a gilded variant of the Chevrolet Avalanche. Wagons came in regular length and longer-wheelbase ESV editions, competing against such models as the Audi Q7, Lincoln Navigator, and Mercedes-Benz GL-Class. The EXT pickup featured a folding midgate separating the cab from the cargo bed.

All of these vehicles were about the same overall size as the 1999-2006 generation they replaced. Regular length or ESV, Escalade wagons seated seven in a 2-2-3 layout, or eight with an optional three-person second-row bench. The EXT pickup seated five. Escalade wagons were available with rear-wheel drive or all-wheel drive, which lacked low-range gearing. EXT and ESV models were AWD-only.

Sole engine was a 403-horsepower, 6.2-liter V8, which replaced a 345-hp, 6.0 V8. A six-speed automatic supplanted a four-speed as the lone transmission, fitted with a shift-lever button for manual operation. Antilock braking, traction/antiskid control with rollover sensors, and automatic-adjusting shock absorbers were standard; 22-inch wheels were optional. Among new standard features, curtain side airbags covered all seating rows and included rollover deployment.

Sole powertrain in Escalades has been a 6.2-liter V8 engine that generates 403 horsepower, working with a six-speed automatic transmission and either rear-wheel or all-wheel drive. In 2010, Escalade’s 6.2-liter V8 gained GM’s Active Fuel Management cylinder deactivation.

1. EPA Note: Figures shown are for 2008 models with AWD. The Environmental Protection Agency changed its procedure for 2008 to yield more realistic estimates. Therefore, estimated mileage is lower than for prior years.

Acceleration is a strong point. All Escalades have ample power for any situation. The transmission changes gears smoothly, though some testers have cited an occasional reluctance to downshift for passing. Towing capacity with the base wagon is 7400 pounds; EXT, 7600 pounds; and ESV, 7800.

Fuel economy, as expected in this league, is a drawback. Test regular-length Escalades have averaged 15.0 to 15.6 mpg-but only 12.7 mpg in mostly urban driving.. Both an ESV and an EXT pickup averaged 13.8 mpg. Cadillac recommends premium-grade gasoline.

Escalades sometimes betray their truck-type design with minor structural shudder on rough pavement. Otherwise, the ride is comfortably absorbent, even with available 22-inch tires. The ESV/EXT’s longer wheelbase contributes to a smoother ride.

Though large, Escalades are stable and confident in changes of direction at low to moderate speeds. Faster cornering triggers obvious body lean and, with 18-inch tires, a fair amount of noseplow. Optional 22-inch tires show little impact on steering and handling. Test-drives have been divided on steering; some laud its feel and response, while others say it’s vague and overassisted. Strong brakes have a reassuringly firm pedal, but fast stops trigger lots of nosedive.

Quiet enough overall, the Escalade ranks only at midpack for the premium large SUV class. Subdued at highway speeds, the V8 roars loudly during rapid acceleration, and its exhaust note is nearly always prominent. Wind rush is noticed from large door mirrors and around front doors, from 65 mph on up. Moderate coarse-surface tire thrum is evident with 22-inch tires.

Gauges are large, but their blue pointers can be hard to see under some conditions. All major controls are within easy reach. Cadillac’s navigation system has a large, easy-to-read touch screen, which absorbs but does not complicate audio functions. The cabin exhibits impressive assembly quality and mostly top-notch materials, though some cabin plastics disappoint at Escalade’s prices.

Front riders can savor big-rig space on wide, comfortable seats, though the tallest drivers may want still more head- and legroom. Folding the midgate on the EXT pickup requires moving front seats forward slightly, reducing legroom. Standard power-adjustable pedals can be helpful, but absence of a telescoping or power-adjustable steering column is surprising at this price level. Visibility is impeded astern and to the right-rear by roof design, but the standard rear-obstacle detection and available rearview camera compensate. This is a tall truck, so some climbing is needed to get inside.

Rear-seat occupants face another rather high step to the second row, where comfortable seats furnish good head- and legroom. In either wagon body length, the thinly padded third-row bench will scrunch those over 5-foot-6, and accessing it demands a low crouch while clearing flipped second-row seats. If the spring-release option is installed, those second-row seats fold/tumble readily at the push of a release button (for buckets) or lever (for bench); but the seat must be manually returned to the upright position.

In standard-length wagons, only grocery-bag space is available behind the third-row bench, but the cargo area expands considerably with those seatbacks flopped down. Space is generous behind the ESV’s third row. In both wagons, the third-row seat is split into 50/50 sections that don’t fold flush with the floor. Those sections also are heavy and cumbersome to remove or install. Like that of Chevrolet’s Avalanche, the EXT’s versatile cargo bed has locking storage compartments outside plus washable plastic walls and a rubber floormat. The hard tonneau and locking tailgate make it essentially a deep trunk. Removing the three-piece hard tonneau is a chore, best left to the nimble. Lowering the midgate also is a several-step process. The bed hosts handy fold-out tie-down hooks. Good cabin storage includes a large bi-level console bin.