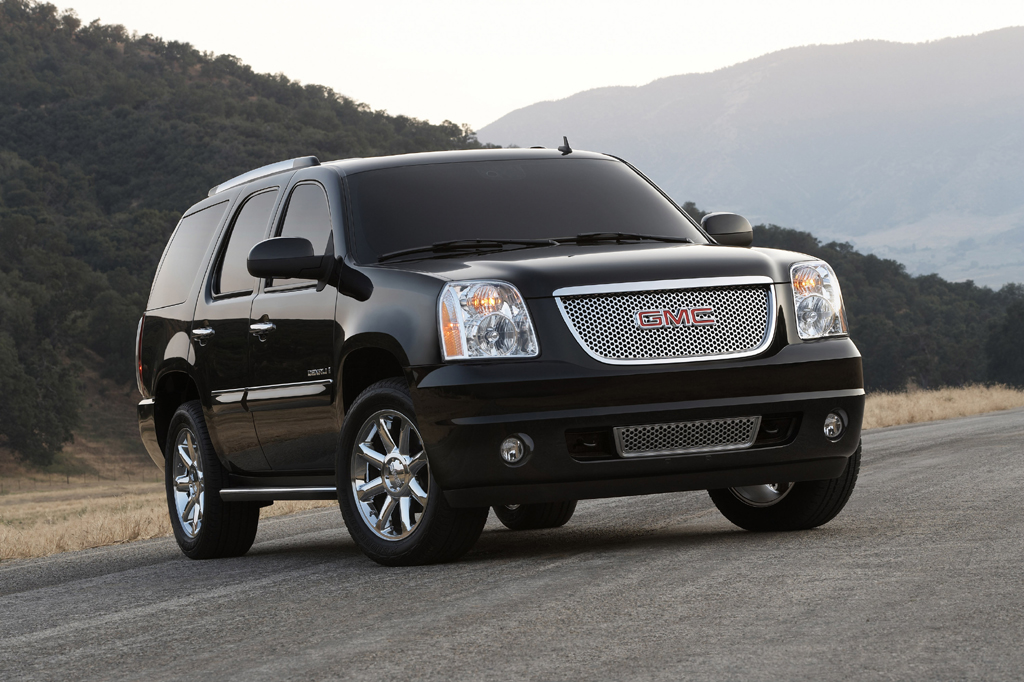 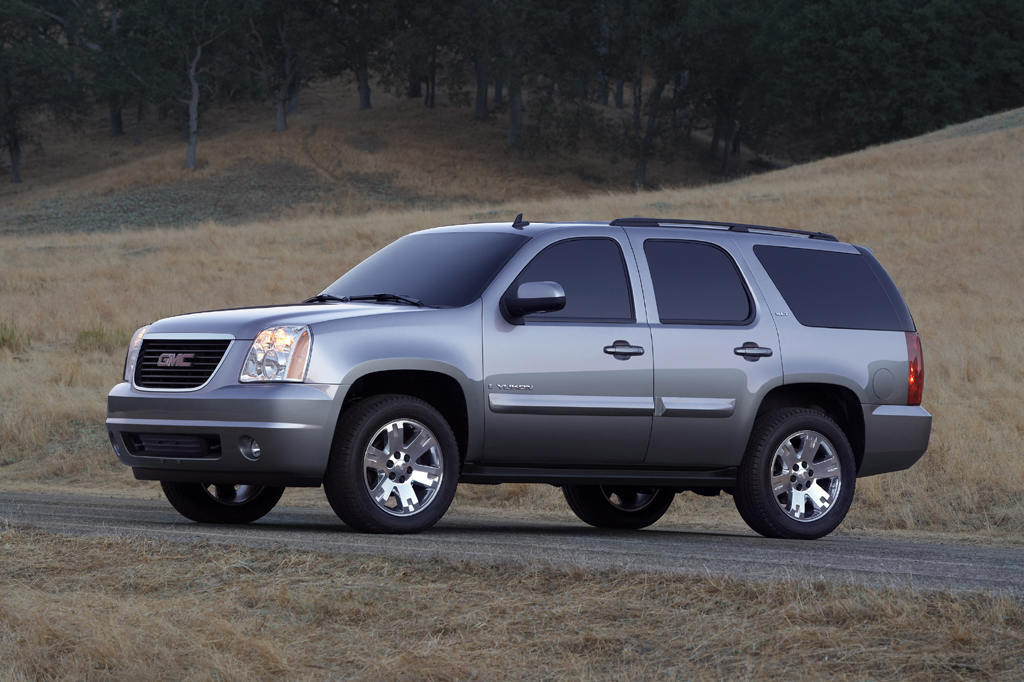 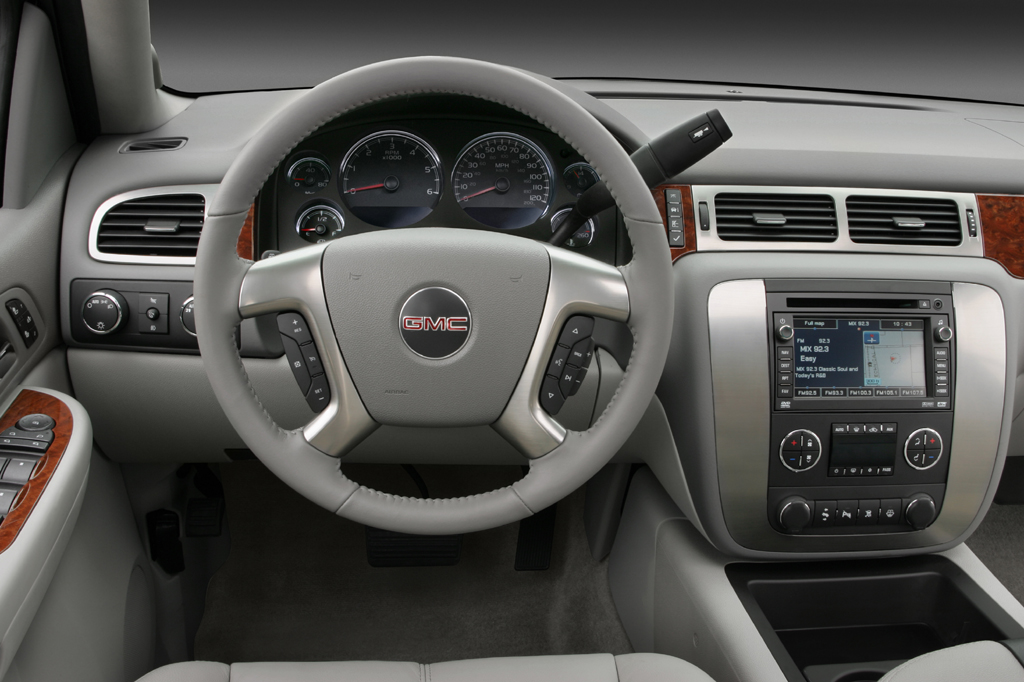 GM’s 2007 redesign of its large Chevrolet and GMC SUVs addressed the most egregious flaws of their 2000-2006 predecessors: sloppy steering and subpar interior appointments. Third-row accommodations in the regular-length versions are still best suited for children. But for smooth power, utility, and surprising overall refinement, these are first-rate trucks. A carefully optioned Yukon SLE or SLT has been the best choice in the GMC lineup. Like the Tahoe, it’s a Best Buy (2007-12) value among large SUVs. Yukon’s performance and accommodations mirror those of comparably equipped Tahoes, and the Yukon XL is similar to Chevrolet’s Suburban. Yukons are promoted as an upscale alternative to Tahoe, and the Denali is positioned just below Cadillac’s Escalade. Despite more power and luxury touches, Denali fails to deliver enough of either to justify its higher prices and thirst for premium-grade fuel.

Standard on the rear-drive SLE model was a 295-horsepower, 4.8-liter V8. A 320-hp, 5.3-liter V8 was optional on that model and standard on other Yukons. Available on the Yukon XL was a 355-hp, 6.0-liter V8. Each of these engines used a four-speed automatic transmission and incorporated GM’s Active Fuel Management cylinder deactivation system. Yukon Denalis got a 380-hp V8 and six-speed automatic transmission.

Antilock braking and traction/antiskid control with rollover sensors were standard. GM’s self-adjusting Autoride suspension was available on SLT models, and standard on Denalis. Curtain side airbags that covered all seating rows and included rollover deployment were standard on SLT and Denali, and optional for SLE.

Yukons seated up to nine passengers. Denalis held up to eight. In all models, the second- and third-row seats folded and the third row was removable. As in GM’s other large SUVs, a spring-release option could flip the second-row seats to provide third-row access. GM’s OnStar assistance was standard. A power liftgate, remote engine start, rear-obstacle detection, and power-adjustable pedals were standard on Denali, and available on other models.

DVD entertainment and a navigation system with rearview camera also were available.

Yukons and Yukon XLs have come with a variety of V8 powertrains. A 4.8-liter V8 has been standard in the Yukon SLE. Other regular-length Yukons held a standard 5.3-liter V8. A 6.0-liter V8 was optional in Yukon XLs through 2009. Denalis contain a 6.2-liter V8 that generated 380 horsepower. The 6.2-liter’s horsepower increased to 403 in 2009. The 6.2-liter became optional on Yukon XL starting in 2010. Four-speed automatic transmissions were used in all models except the Denali, which got a six-speed automatic. Denalis came with rear-wheel drive or all-wheel drive; other models could have either rear-drive or four-wheel drive. Some versions of the 5.3-liter V8 and the Denali’s 6.2-liter V8 could run on E85 ethanol-blended fuel. The Yukon Hybrid, introduced for 2008, used a 320-hp version of the 6.0-liter V8, coupled to an electric motor. Horsepower increased to 320 the next year. Note that the Hybrid gets the same 20-mpg EPA fuel-economy estimate in both city and highway driving, a result of its gas/electric powertrain.

1. EPA Note: Figures shown are for 2008 models. The Environmental Protection Agency changed its procedure for 2008 to yield more realistic estimates. Therefore, estimated mileage is lower than for prior years. 2. V8/electric

Delivering fine power at any speed, regular-length Yukons with the 5.3-liter V8 are muscular off the line and in highway passing and merging. Response from the Yukon Hybrid’s powertrain also impresses. Despite its extra horsepower, the Denali’s 6.2-liter feels only slightly stronger. Transmissions provide crisp and timely shifts. The Denali’s automatic has shift lever buttons for manual operation. Towing capacity is 8200 pounds for regular-length models, and 8100 pounds for XL models. Hybrids behave much like their conventional siblings and can tow up to 6200 lb. The electric-to-gas transition is almost completely transparent.

A test 2WD Yukon SLE averaged 16.7 mpg, versus 14.4 to 14.8 mpg for a 4WD SLT and 13.5 to 14.4 mpg for the Yukon Denali. Note that the Denali’s 6.2-liter V8 lacks Active Fuel Management. A 4WD Yukon Hybrid averaged an excellent-for-the-class 19.5 mpg. GM recommends regular-grade fuel for the 5.3-liter and 6.0-liter V8s, premium for Denali’s 6.2-liter. Ethanol-blended fuel, called E85, can be used in later Denalis and some versions of the Yukon with the 5.3-liter V8 engine. E85 is available in most states and can be less expensive than regular-grade gasoline.

Yukons with 17-inch tires deliver car-like comfort over bumps, though they suffer some floaty motions over dips and swells. GM’s Autoride load-leveling suspension (standard on Denali) quells some float, but doesn’t add demonstrably to ride comfort. Impact harshness over sharp bumps is exaggerated by the short sidewalls of the available 20-inch tires.

Steering requires light effort, which benefits around-town maneuverability. But it can feel overassisted at highway speeds-a sensation that seems to be exaggerated slightly with the available 20-inch tires. Yukons react alertly to steering, and lack the sloppiness that plagued the 2000-2006 generation. These are tall, heavy vehicles, so never feel nimble. Still, Yukons suffer relatively little noseplow and body lean in turns-though no one will mistake these big SUVs for sport sedans. Our testers have been divided on whether models with Autoride feel any more confident in directional changes. Low-speed maneuverability is aided by a relatively tight turning circle. Brakes deliver drama-free stopping power, with solid pedal feel.

For large SUVs, Yukons are impressively quiet. Road noise is well muted. The only evident wind rush comes from around the outside mirrors. Though intended as a more luxurious vehicle, the Denali’s 6.2-liter V8 sounds louder and less refined during rapid acceleration than lesser models’ 5.3 V8. Slight whines and squeals can be heard periodically from the Hybrid’s gas/electric powertrain, but they’re not bothersome and transitions between gasoline and battery power are barely noticeable. On the whole, Yukon powertrains are models of refinement.

Gauges are large, but some testers have found markings too indistinct for best legibility. Most controls are logically placed and operate with precision. The optional navigation system has a large, easy-read touch screen and absorbs, but does not complicate, audio functions. High marks go to Yukon’s upscale contemporary cabin ambience. Most interior materials feel solid to the touch and are assembled with attention to detail, though soft-touch surfaces are scarce. Denalis get additional dress-up touches.

Whether bench or bucket, Yukon front seats are supportive. Head- and legroom are ample, though the bench seat’s cramped center position should be reserved for emergency situations. Available power-adjustable pedals, if installed, are a convenience for shorter drivers. Visibility is unobstructed by headrests or roof pillars, but the body’s tall flanks block the driver’s view of small nearby objects. A rearview camera, if installed, aids aft visibility but distorts distances, compromising its usefulness.

Second-row seats are adult-comfortable. The available automatic-folding seats spring forward to ease access to the third row, though passage is still tight and seats must be manually restored to the original position. The third row is best left to children; its low-to-floor cushion forces knees-up discomfort for anyone beyond toddler size. High step-in complicates entry and exit.

With third-row seats down, the cargo area is spacious. With those seats up, there’s no abundance of storage space. Second-row seats fold forward to expand cargo volume. Folded third-row seatbacks rest well above the level of the rear load floor, complicating loading of larger items. Third-row seats unlatch easily, but are heavy and cumbersome to remove. Cabin storage is enhanced by a large center console bin.