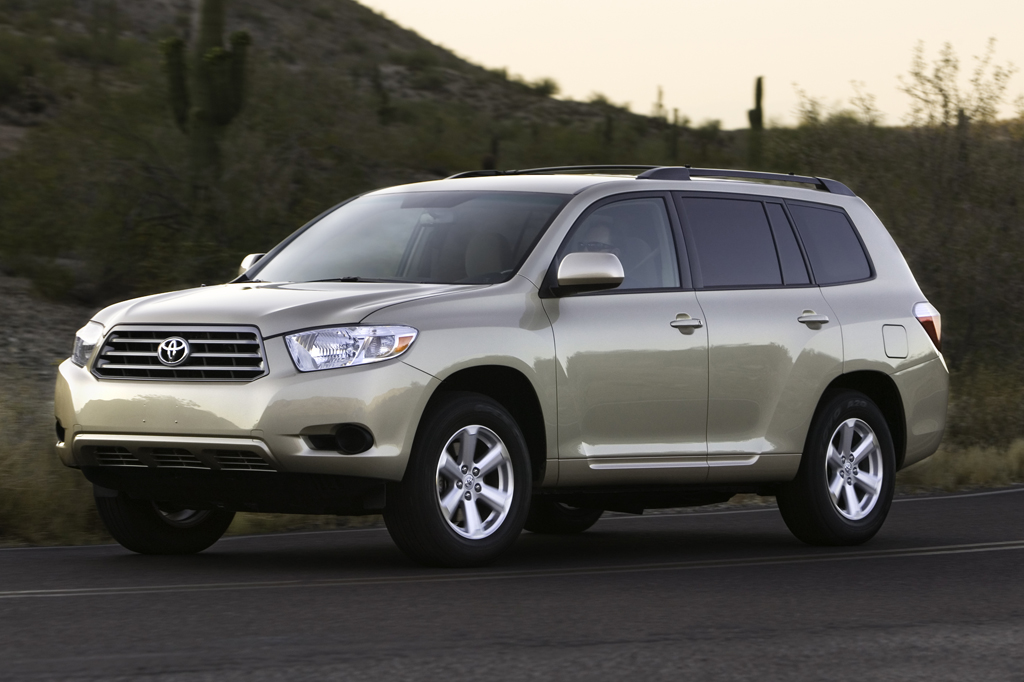 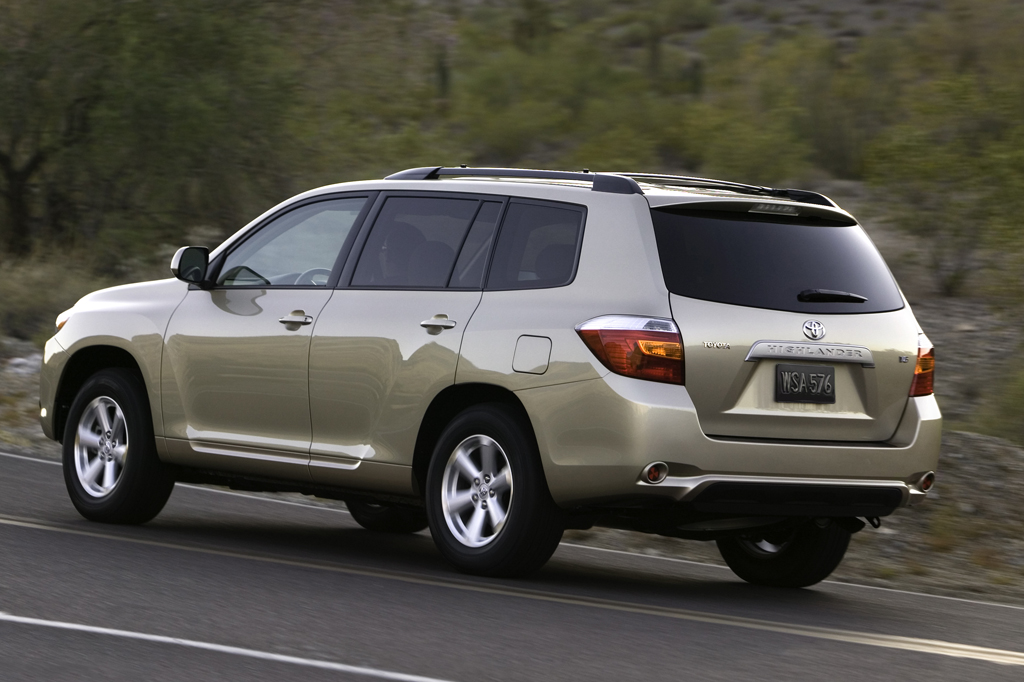 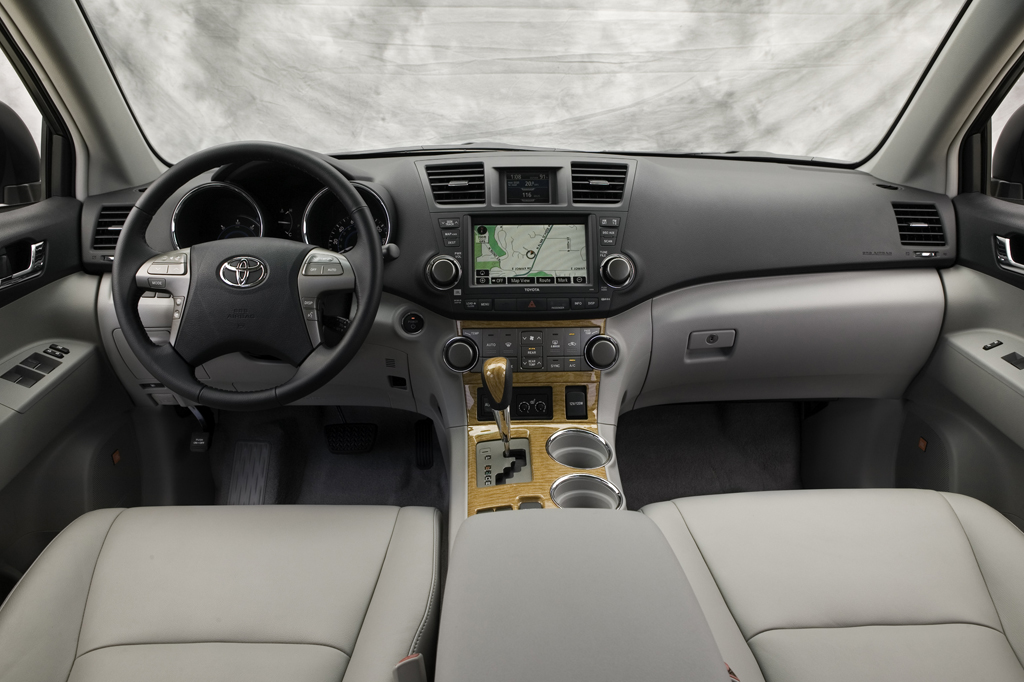 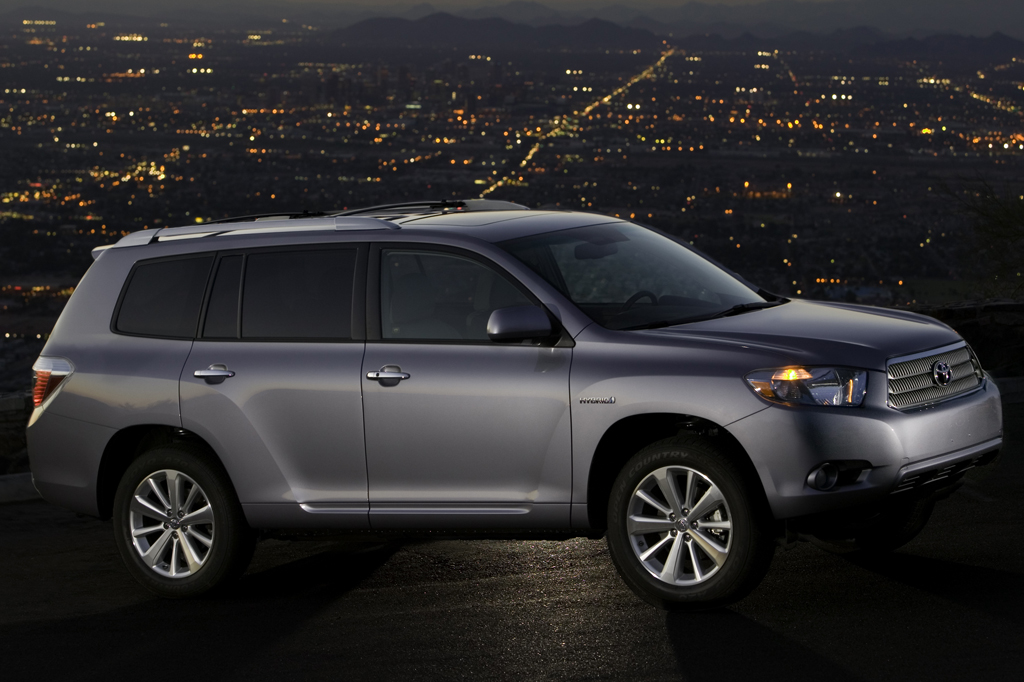 Redesigning of Toyota’s midsize crossover sport-utility vehicle for 2008 brought larger dimensions, more standard safety features, and a new engine. For 2008, Highlander grew nearly four inches in length and three inches in width, resulting in more passenger and cargo room. Highlanders seated up to seven with a stowable third-row seat. The second-row buckets offered three-passenger capacity via a detachable padded center section that folded and stowed in a first-row console when not in use. Rivals included the GMC Acadia, Honda Pilot, and Mazda CX-9.

Highlanders could have front-wheel drive or all-wheel drive. Non-Hybrid Highlanders came in Base, Sport, and Limited models and used a 270-horsepower 3.5-liter V6 engine. The AWD-only Hybrid came in Base and Limited trims and used a 3.3-liter V6 teamed with an electric motor for a combined 270 horsepower. Like Toyota’s other hybrids, it could run on either or both of its power sources depending on driving demands, and required no plug-in charging. Hybrids had a continuously variable automatic transmission (CVT). Other Highlanders used a conventional five-speed automatic transmission with manual shifting capability. New for 2008 was the Hybrid’s EV mode that allowed the driver to put Highlander into full-electric drive mode for a limited distance. Also new was a driver-selectable Econ mode that regulated throttle inputs for optimum fuel economy.

Highlanders with the conventional V6 engine have good all-around power. They’re peppy off the line and competent during midrange passing. Hybrids are nearly as strong; an equivalent Lexus RX 400h accelerated to 60 mph in 7.3 seconds. The responsive CVT helps, though the gas-electric powertrain is prone to subtle but annoying surging and bogging in cruising conditions. The Hybrid’s Econ mode severely limits throttle response from a stop to help save fuel.

Ride comfort ranks among the best in class. A test AWD Limited floated smoothly over smaller bumps, though larger ones sometimes pounded through. Note that Sport models have a sport suspension that rides more stiffly.

Handling could be better. Highlanders are pleasant to drive, though not quite car-agile. Cornering lean is evident and steering response a bit slow on Base and Limited models; Sports are only slightly better. Overall control is fine, and brake-pedal feel is firm and progressive.

Highlanders are generally quiet, though wind and road noise are noticed at highway speeds. While accelerating, engines emit a rich, subtle purr, but the Hybrid’s electric motor is annoyingly whiny.

All versions have large, easy-to-read gauges and high-mounted audio and climate controls. The available navigation system is fairly intuitive but absorbs and complicates audio-system adjustments. Hybrids include a fuel-economy indicator gauge behind the steering wheel that shows when it’s being driven most efficiently. The Base model’s interior is fitted with above-average-grade plastics and comfortable cloth upholstery. Only the fuzzy headliner feels cheap. Sport models have good-quality suede and metal trim throughout the cabin. The Limited’s interior adds some unconvincing simulated wood trim.

Front seats are nicely supportive, with ample headroom and legroom. Forward visibility is good, thanks to an elevated seating position. Rear visibility is impaired by second-row headrests and thick rear roof pillars. Entering a Highlander requires only a modest step-up.

Second-row space is ample for two adults on a 40/20/40 split seat that slides fore/aft a few inches to benefit either second- or third-row legroom. The center section of the second-row seat can be configured in one of three ways: as a very narrow, sparsely padded seat; as a console with tray table; or as an empty passageway to the third row. That seat and console are interchangeable; the unused one can be slid into a compartment beneath the front console. The third-row bench can seat adults if the second row is moved forward, though they’ll sit knees-up and find little foot room. Only the passenger side of the second-row seat moves forward to allow third-row access, though children could get back there by climbing through the passageway between the second-row seats.

There’s only grocery-bag space behind the third-row seat, but that stows quickly to create a flat floor. The split second-row seatbacks are more cumbersome to fold and don’t lay quite flat. Sport and Limited models have a useful separate-opening glass in the rear hatch. Top-notch small-items storage includes 10 cupholders and four bottle holders, along with assorted map pockets and other convenient nooks and crannies.