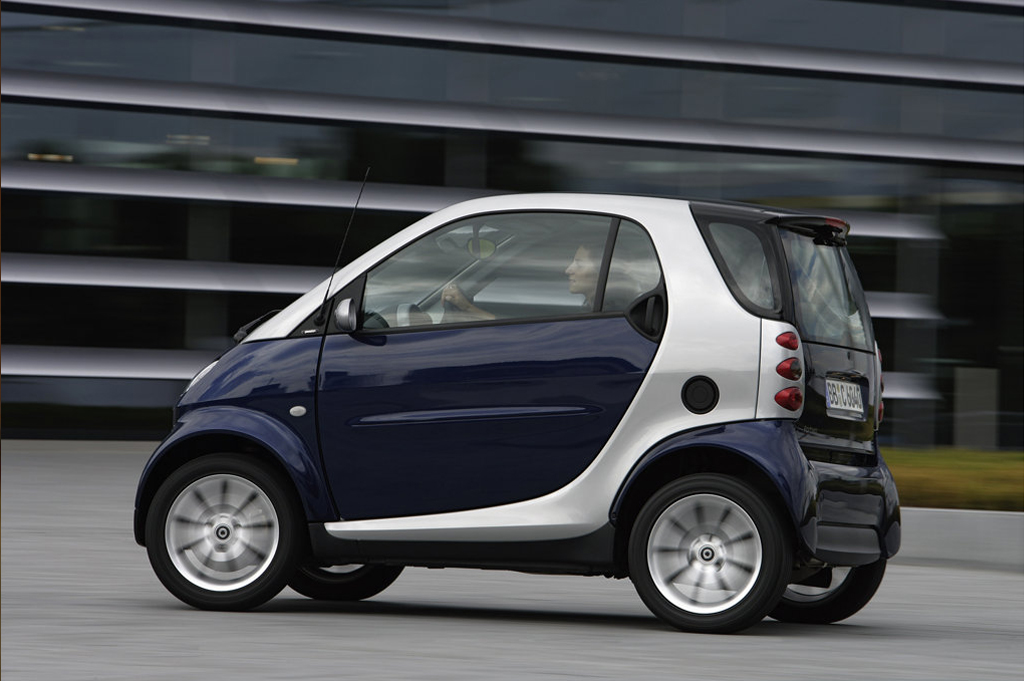 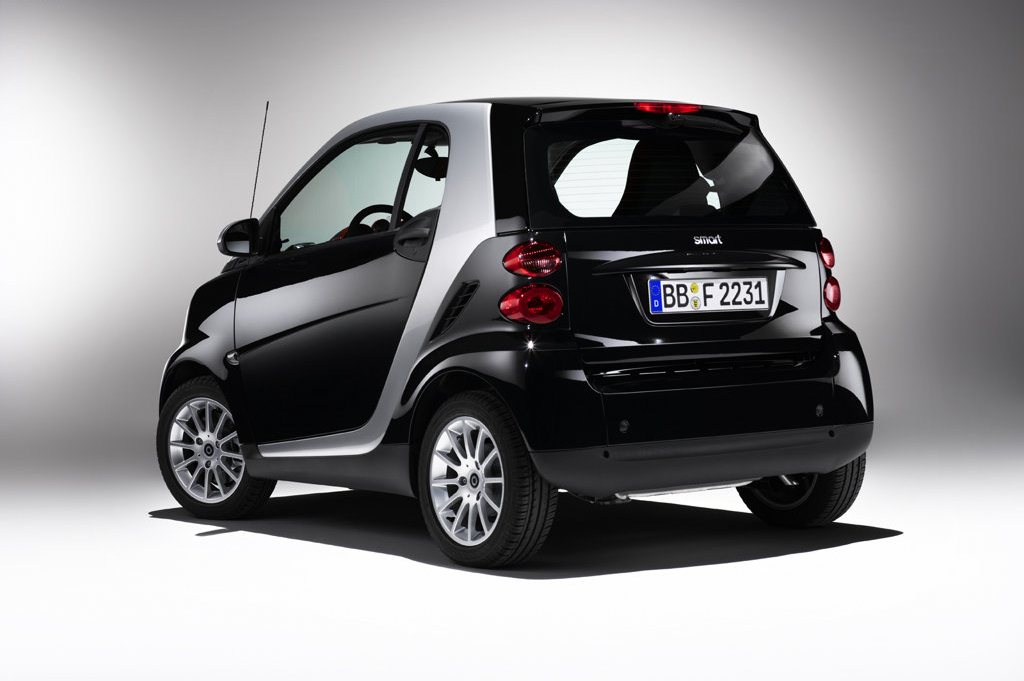 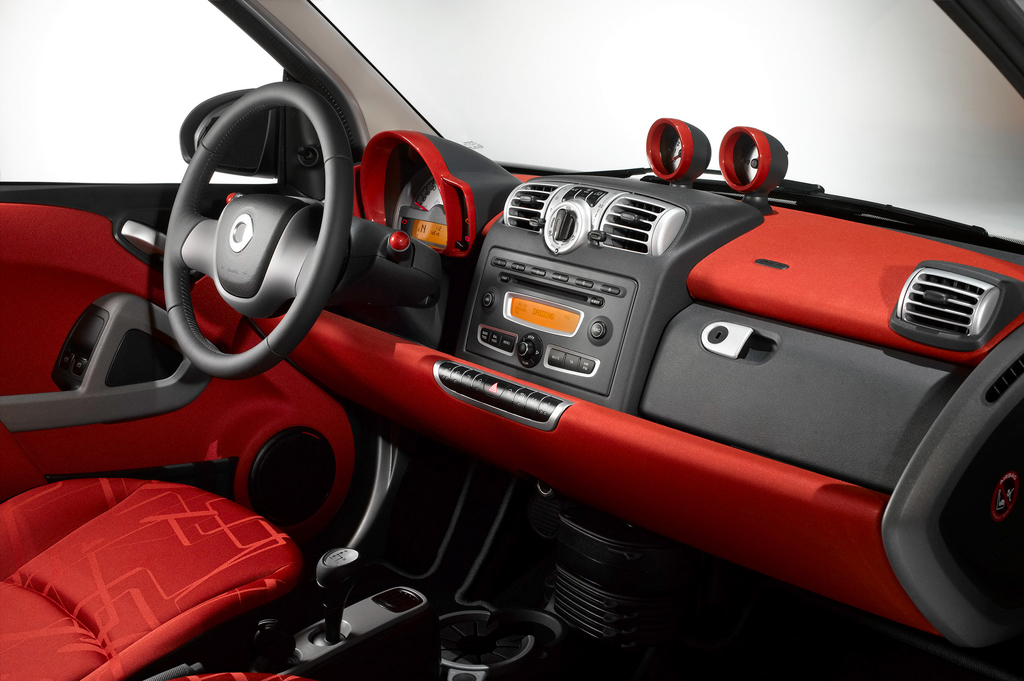 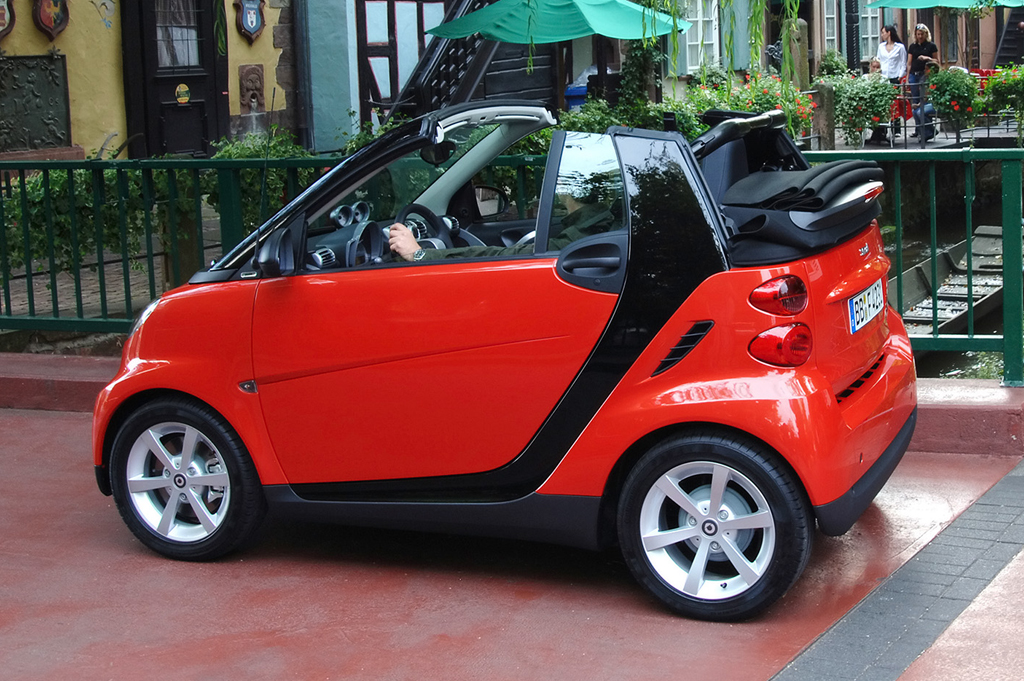 Nothing on American roads comes close to resembling the Smart ForTwo, which debuted for 2008 as the smallest and shortest car in the U.S. mass market. The ForTwo was an ultra-compact rear-engine, rear-wheel-drive two-seater designed and built by the Smart company, a division of Daimler/Mercedes-Benz. ForTwos had been on sale in Europe and other foreign markets since 1998, but 2008 marked the car’s U.S. debut. Smart partnered with U.S. dealership network Penske Automotive Group, Inc. to form Smart USA. That new company planned to sell the ForTwo in approximately 70 select Mercedes-Benz and stand-alone dealerships across the country.

Two-door coupe and Cabriolet (convertible) body styles were offered, powered by a tiny 70-horsepower 1.0-liter three-cylinder engine mounted beneath the rear hatch. The sole transmission was a five-speed automated manual that had no clutch pedal and could be set to shift like an automatic.

Side airbags with head and torso protection, antilock brakes, traction control, and an antiskid system were standard on all models. Coupes in base-level Pure trim came standard with manual windows and mirrors, and a fold-flat passenger seat. Uplevel Passion coupes added air conditioning, a panoramic fixed sunroof, alloy wheels, and power windows and mirrors. Cabriolets came only in Passion trim, and included a power soft top with a heated glass rear window. Stand-alone options for all models included power steering, heated seats, and an alarm system. Note that some ForTwos may lack power steering, which could affect handling ease. Possible rivals included the Honda Fit, Hyundai Accent, and Suzuki SX4, but all of those cars had back seats.

Gas versions of the Smart ForTwo all use the same powertrain: a 1.0-liter three-cylinder engine that produces 70 horsepower, working with a five-speed automated manual transmission. Unlike nearly all small cars, Smart ForTwos have rear-wheel drive, with a rear-mounted engine — or in the case of the all-electric versions, a rear-mounted motor rated at 40 horsepower.

Performance is not a plus. Smart pegged the ForTwo’s 0-60 mph acceleration at a leisurely 12.8 seconds, though our testing suggested a slightly quicker figure. Either way, acceleration is sluggish from a stop and plagued by annoying bobbing and surging at every shift, whether the transmission is in manual or automatic mode. Over time, our testers learned to shift in manual mode for optimal smoothness and acceleration, though the final results were still less than impressive. Buyers must expect to spend some time learning how to get a reasonable level of smoothness out of the transmission. The small engine struggles to provide adequate highway passing power. Electric versions weigh about 300 pounds more than their gas-powered counterparts. They accelerate at a similar rate from a stop, but seem slower from 30 mph on up. Their top speed is limited to 62 mph.

Fuel economy should be a plus, and it is-though despite its two-passenger capacity, Smart is not quite as thrifty as some might expect. ForTwo models have averaged 38.8 mpg. Surprisingly, Smart USA recommends premium-grade fuel. Smart says the range of electric versions is about 80 miles, and that the battery can be fully recharged in about eight hours on a 220-volt circuit. The car can also be recharged from a conventional 110-volt outlet, but charging times will be longer.

Solid body structure helps the ForTwo feel relatively composed on smooth roads despite its short wheelbase and narrow track. Smart cars get stiff and choppy over all but glass-smooth roads, with sharp bumps and expansion cracks causing abrupt vertical motions. Electric versions ride a bit more smoothly, likely due to their greater weight.

These cars are never serene. Road noise is relatively well-muffled, but wind rush is pronounced at highway speeds. The engine note is always audible and rises to a loud groan under acceleration. Electric versions produce a moderate whine under acceleration that is less intrusive. Top-down conversation is possible in the convertible at highway speeds, partly because the two occupants are sitting so close together.

Gauges are easy to see; the speedometer is unobstructed, and the optional tachometer and clock are positioned above the dashboard in free-standing pods. Controls are simple and well laid out. The convertible’s soft top can be retracted to any position at any speed-a neat feature to have at times. However, side roof bars must be manually removed and stowed in the tailgate compartment to get the full open-air feel. Cabin materials are solid and well-assembled, and switchgear has a quality feel, but overall ambience is low-budget. Expect to see plenty of hard plastic and few padded surfaces.

Six-footers get surprising headroom and legroom, but the narrow cabin means two adults ride almost shoulder-to-shoulder. Seats are supportive, with good side bolstering. An upright driving position prevents occupants from feeling dwarfed by surrounding traffic. Visibility is great all-around. Tall build and wide doors make for easy entry and exit. Lack of a tilt steering column may limit comfort for some drivers.