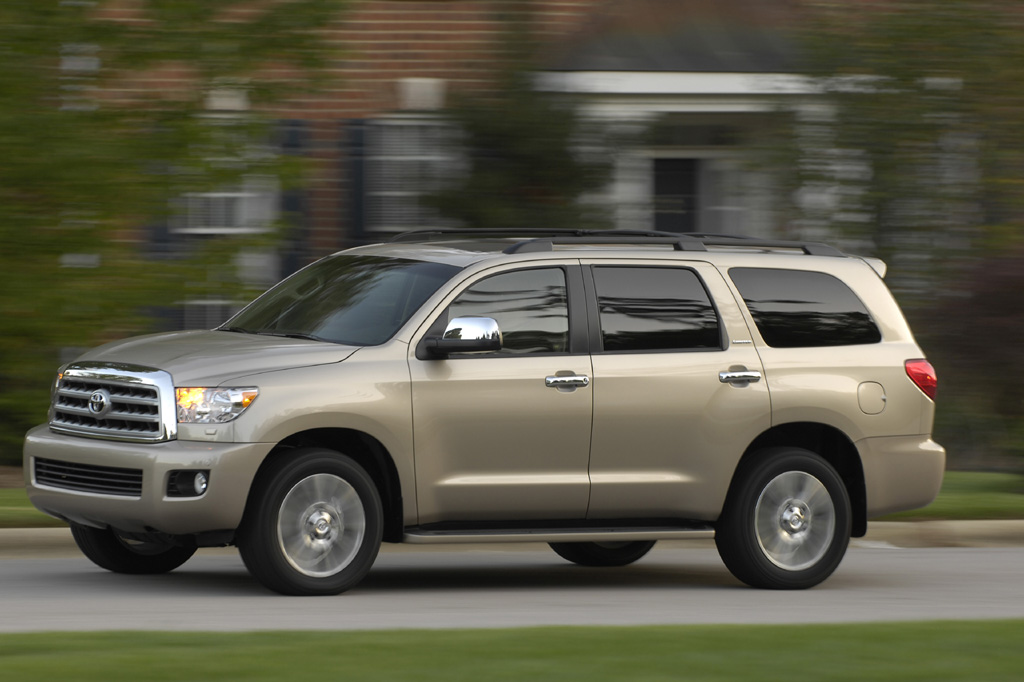 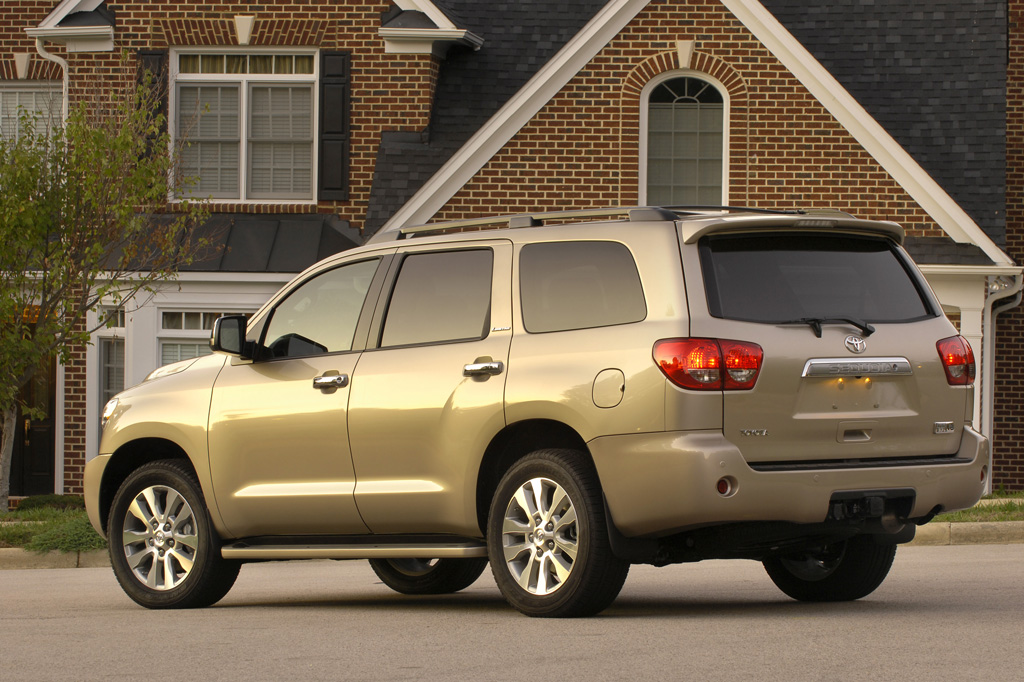 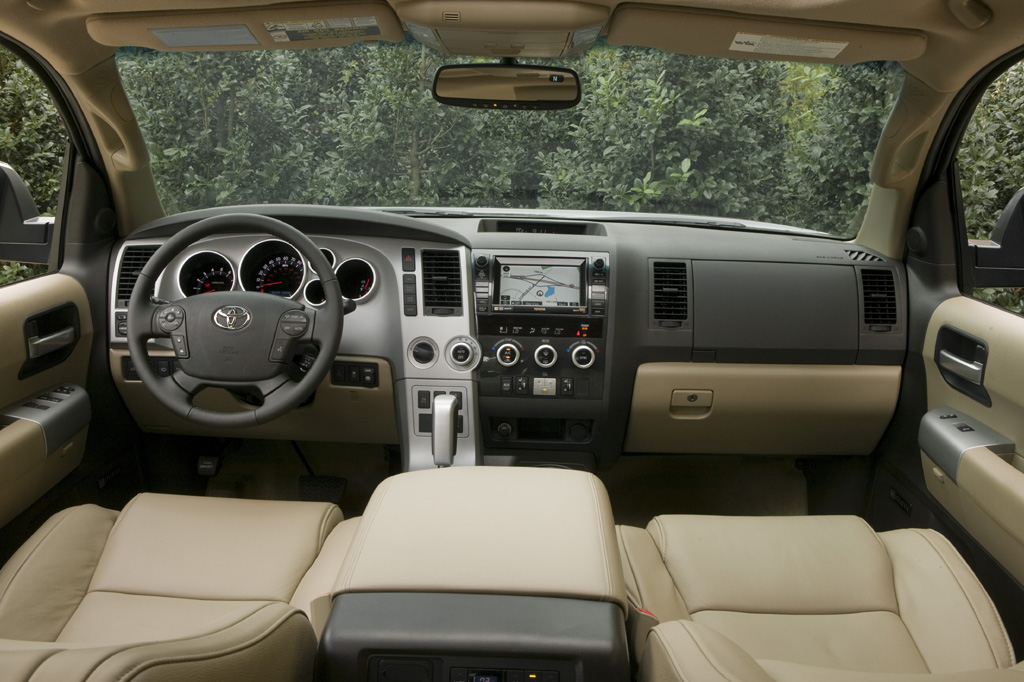 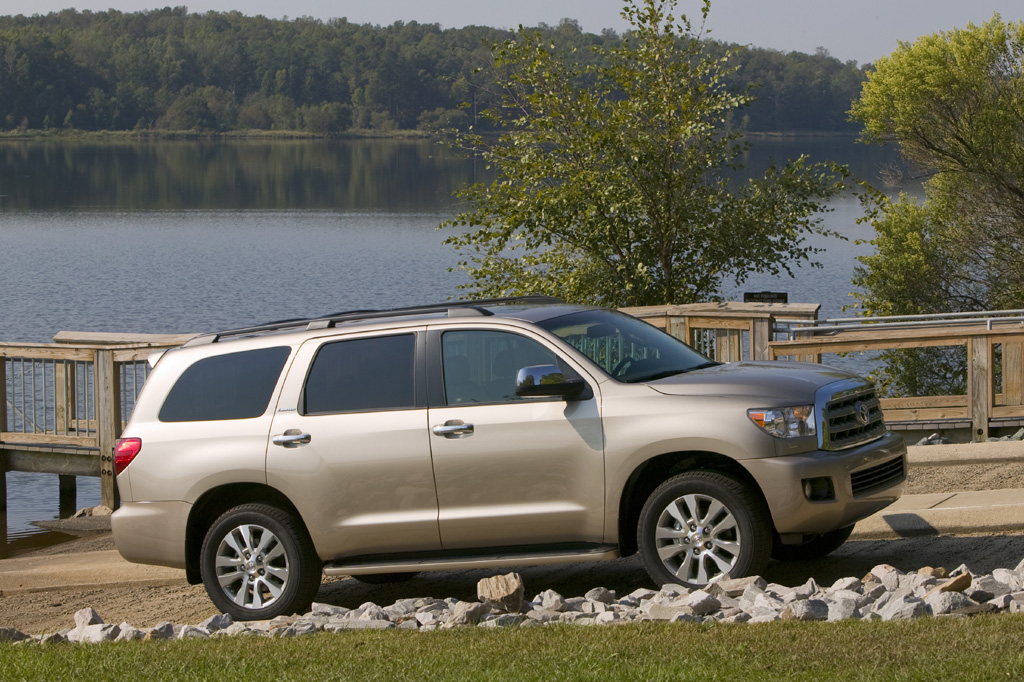 No longer at a disadvantage in power or towing ability, the Sequoia more than holds its own against most rivals in every measure, except for dashboard convenience and cargo space behind the third-row seat. Even those demerits are softened by an otherwise inviting cabin, along with overall size that makes close-quarters maneuvering easier than with most vehicles in this class.

Redesigned for the 2008 model year, Toyota’s Sequoia gained new styling and features along with more available power, without growing much larger. Sequoia was based on the chassis of Toyota’s big Tundra pickup truck. Though it shared Tundra’s powertrains, the Sequoia got an independent rear suspension that made possible a lower floor and more legroom for its third-row seat. Compared to the 2001-2007 Sequoia, the 2008 model was just 1.2 inches longer and about an inch taller and wider. However, its wheelbase (distance between front and rear axles) rose 3.9 inches. Most of that expansion went to added passenger space; cargo volume actually shrunk by 8.1 cubic feet.

Sequoias came with rear-wheel drive or four-wheel drive, which could be left engaged on dry pavement and included low-range gearing. Seating for eight was standard on the SR5 and Limited. Replacing the second-row bench with two bucket seats and a console created seating for seven, which was standard in the Platinum and optional for the Limited. Standard safety features included antilock brakes, traction control, an antiskid system, curtain side airbags with rollover deployment that covered all seating rows, and front side airbags. All Sequoias had a tilt/telescoping steering column and three-zone climate control. Standard or optional, depending on model, were a power-folding third-row seat, adjustable air suspension, navigation and DVD entertainment systems, rearview camera, and adaptive cruise control. Sequoia competitors included the Chevrolet Tahoe, GMC Yukon, Ford Expedition, and Nissan Armada.

Three powertrains have been offered in Sequoias. In 2008 and 2009 SR5 and Limited editions, a 4.7-liter V8 rated at 276 horsepower mates with a five-speed automatic transmission. A 381-horsepower, 5.7-liter V8 goes into the Platinum edition (and is optional for the other models), driving a six-speed automatic transmission. In 2010, the SR5’s standard engine switched to a 4.6-liter V8 with 310 horsepower. It mated to a 6-speed automatic. The 5.7-liter V8 was optional in SR5 and standard on the Limited and Platinum models. In 2013, the 4.6-liter engine was dropped, leaving the 5.7 standard in all trim levels. Sequoias are available in rear- and four-wheel drive.

With the 5.7-liter V8, there’s plenty of power from any speed, but the transmission’s reluctance to downshift can complicate passing/merging maneuvers. Towing capacity for all models, with either engine, is 10,000 pounds, versus the previous-generation’s 6500 pounds.

Fuel economy, as expected, is not a selling point. 4WD Sequoias with the 5.7-liter V8 averaged 14.0 mpg in city/highway use and 16.1 mpg with mostly highway driving. Though far from frugal, both figures are surprisingly good for a vehicle of this nature, given the 5.7 V8’s power and lack of a fuel-saving cylinder-deactivation feature. Both engines use regular-grade gasoline, but some 2009 models with 4WD and the 5.7 V8 may be equipped to run on E85 as an alterative to gasoline.

A long wheelbase and lots of weight subdue most every bump. If installed, 20-inch tires don’t degrade ride quality by much compared to the standard 18s. The available adjustable suspension, controlled by a dashboard switch, has three settings. Sequoias are prone to unpleasant wavy-pavement wallowing with the base suspension, as well as with the adjustable suspension in either mode other than “sport.”

Sequoia is composed in most every routine maneuver, with the bonus of a usefully tight turning radius and outstanding brake power and pedal feel. In any Sequoia, fast turns result in marked body lean. Combined with steering that’s too light and indirect, it takes the fun out of twisty roads. Still, straight-line stability is confident. The 20-inch tires provide enough additional grip and diminish the copious noseplow present in speedy cornering with the 18-inch tires.

Quietness is a virtue, and overall refinement rivals premium-class SUVs. Although the 5.7-liter V8 roars intrusively in rapid acceleration, road and wind noise are very well managed. Conversation between the first and third rows is possible at highway speeds.

Sequoia shares its dashboard design with the Tundra, thus suffering the same problem of secondary gauges partially blocked from the driver’s view by the steering-wheel rim. However, Sequoia adds a plethora of controls to govern its many added features, such as the air suspension and rear climate system. Sequoia’s main controls are large and clearly marked, but many of these smaller buttons are not conveniently placed or identified. Many controls reside too far to the passenger side of the console-a long stretch from the driver’s seat. If installed, the navigation screen washes out in some sunlight conditions.

A dashboard of hollow-sounding plastic panels and a cut-rate feel to some of the main controls detract from Sequoia’s otherwise impressive build quality. There’s a reassuring solidity to the way the doors close, and in general, to the vehicle itself.

Front occupants get only adequate six-footer head clearance, but legroom is bountiful and the seats are roomy, comfortable, and supportive. High ground clearance strains getting in and out, and the available running board steps are too narrow to be of much help. Visibility is commanding to the front and sides, but poor to the rear in close quarters. A model with the rearview camera would also prove useful when backing up to a trailer hitch.

Three adults fit in the second row, with shoulders lightly touching. All will have good legroom thanks to a nearly flat floor. Only the center rider will notice uncomfortable pressure points from a seatback section that doubles as a fold-down armrest. Second-row buckets promise class-leading support and size. Like the bench, they slide fore and aft. The bench’s center section slides farther forward for easier parental reach to a child seat. (Sequoias have mounting points for four child seats.)

Third-row comfort is adult-adequate. So is space with the second row less than halfway back. However, adults still ride more knees-up than in the Ford Expedition, but are far less cramped than in a Chevrolet Suburban or its General Motors cousins. Sequoia’s second-row seats spring forward in one motion to create an unusually wide portal to the third row. Enormous door openings aid entry/exit, but don’t fully mitigate the high step-in.

Sequoia is more than one foot shorter than a Suburban or Expedition, so cargo room behind the third row is relatively limited. Four rolling luggage bags, set upright, take up most of the space. More helpful is a full-width bin below the rear floor section. Second- and third-row seats fold even with the floor to create a long, flat expanse. Cabins are packed with cupholders, bins, pouches, and pockets.