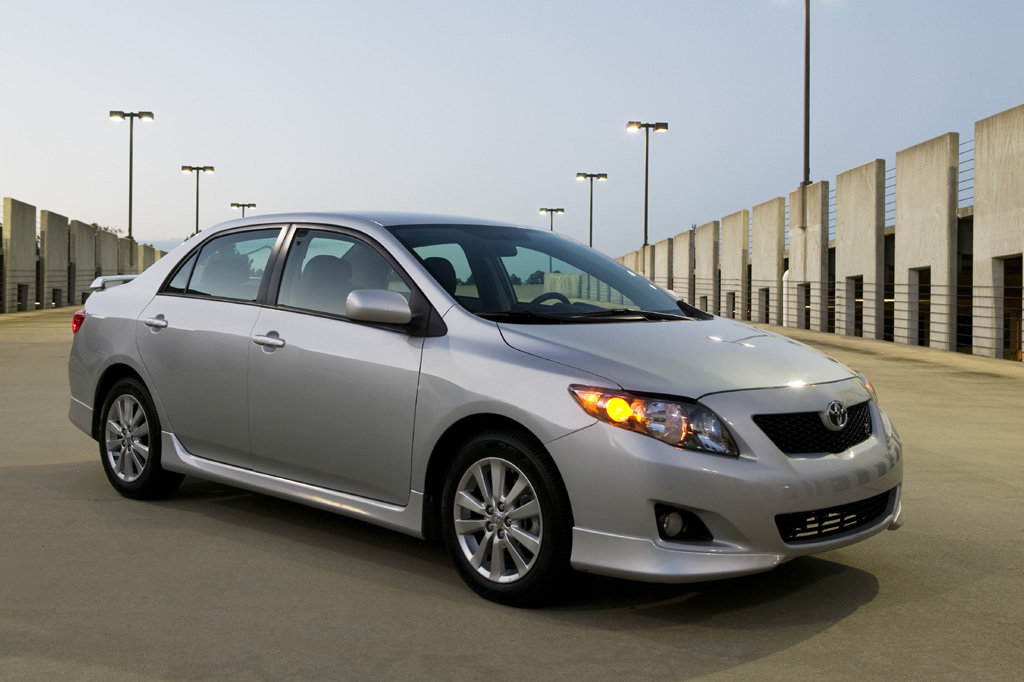 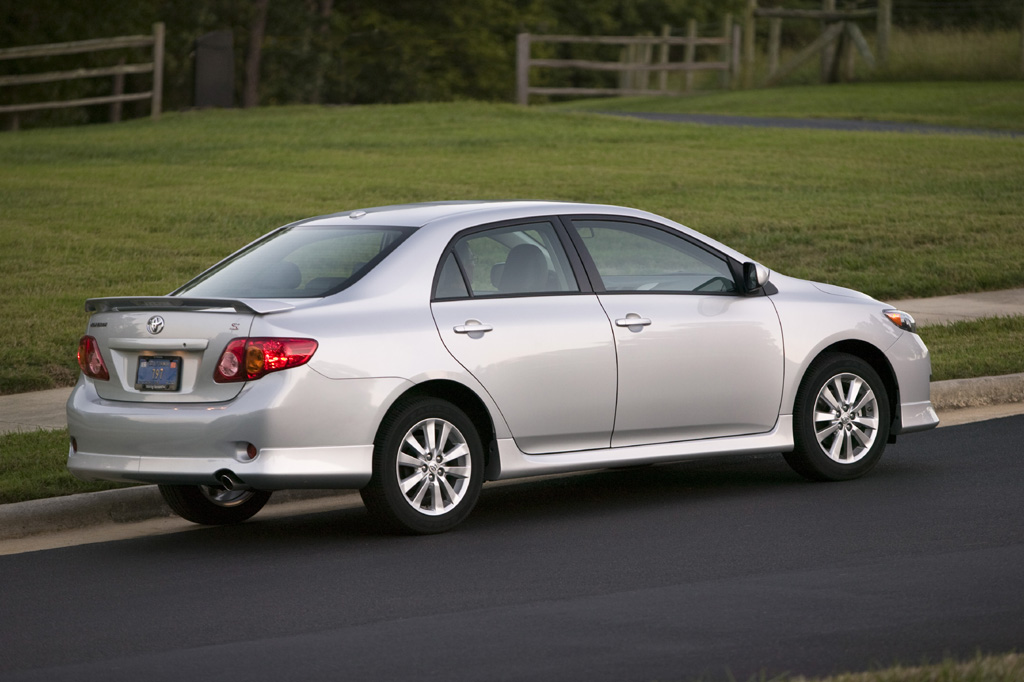 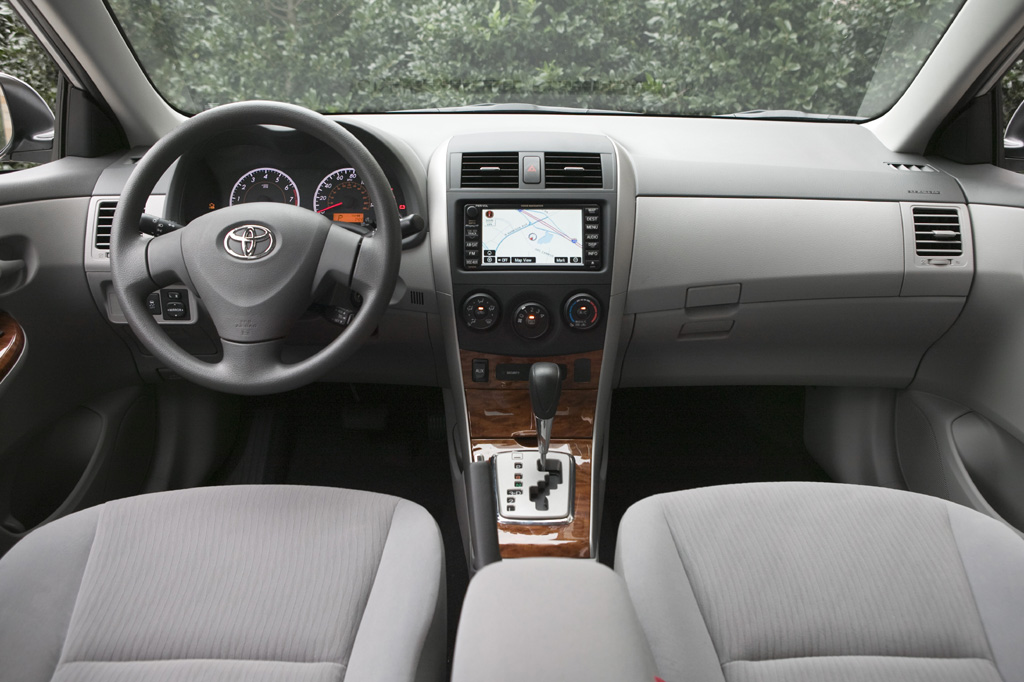 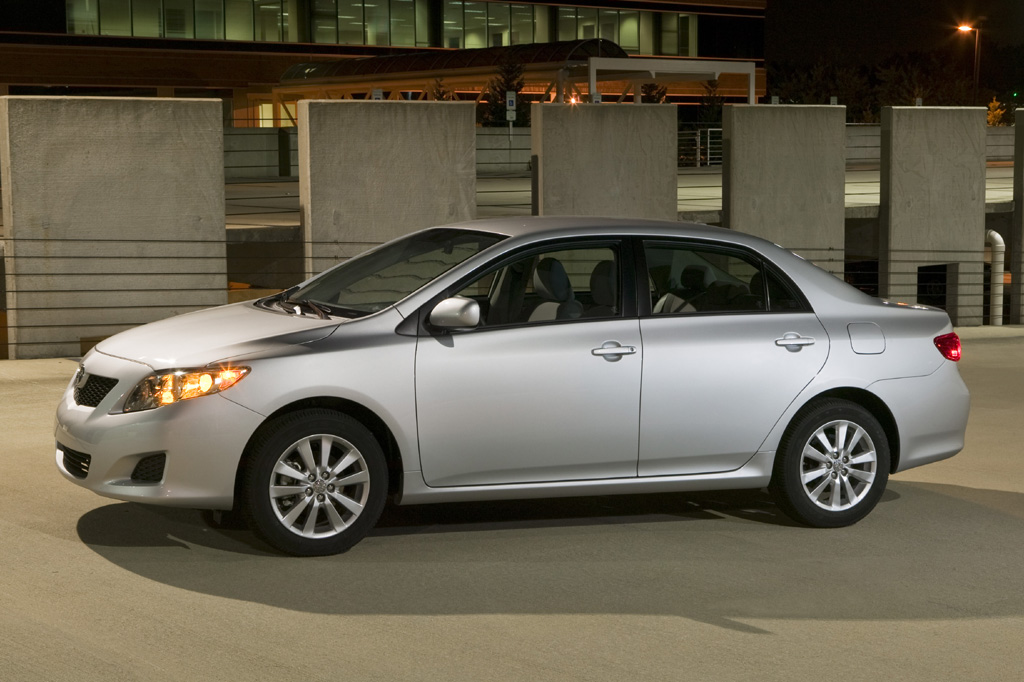 Toyota’s take-no-chances approach has served legions of Corolla buyers who want a quiet, soft ride, and value good fuel economy over lively performance. The current model doesn’t stray from that formula-not even the sporty XRS. Aside from its reputation for reliability and strong resale value (marred somewhat by the highly-publicized recalls of other Toyota models early in 2010), today’s Corolla puts little distance between itself and the equally conservative Hyundai Elantra. That wouldn’t be an issue, except that the Hyundai comes with nicer interior appointments, and costs less (new or used) when comparably equipped.

Redesigning of Toyota’s compact front-drive sedan for 2009 gave it more available power, more standard safety features, and fresh styling. Although this Corolla sedan was 2.5 inches wider than the 2003-2008 version, other exterior and interior dimensions changed little. Corollas came in five trim levels for 2009, up from three in 2008. Base, LE, new XLE, and sporty S models held a 132-horsepower 1.8-liter four engine, which replaced a 126-hp 1.8-liter four-cylinder. The top-of-the-line XRS model had a 158-horsepower 2.4-liter four-cylinder. A five-speed manual transmission was standard. The optional automatic transmission was a five-speed on the XRS and a four-speed on other Corollas. The XRS included 17-inch wheels and four-wheel disc brakes, versus other models’ 15- or 16-inch wheels and front-disc/rear-drum brakes.

Traction control and an antiskid system were standard only on the XRS sedan, but optional on other models. A navigation system was available for the first time, optional on all but Base and LE models. Leather upholstery was an option exclusive to S and XRS versions. Note that Corolla lent its basic design and powertrains to Toyota’s Matrix wagon and the similar Vibe from General Motors’ Pontiac division. Corolla rivals included the Honda Civic, Hyundai Elantra, and Mazda 3. Now in their 10th generation, Corollas have been sold in the U.S. for four decades.

Acceleration is acceptable, with some qualification. With the 1.8-liter engine and automatic transmission, Corolla has enough verve for stress-free driving. Models with that powertrain have somewhat touchy throttle response from a stop, while merging and passing moves require planning and a deep stab on the gas pedal. XRS has more than adequate power with the manual transmission. Toyota quoted 0-60 mph acceleration in 8.1 seconds, but an XRS doesn’t feel quite that quick. The manual’s shifter has long throws and vague clutch action, which are frustrating for both daily commuting and sporty driving.

Fuel economy is more appealing. A test XLE with automatic averaged 31.8 mpg in mostly highway driving. A manual-transmission XRS averaged 29.2 mpg-also a reasonably frugal result, even in a test where the majority of miles were on the highway. All Corollas use regular-grade gasoline.

All models aim for smooth isolation and mostly achieve that goal. Bump absorption is among the best in the compact class, and there’s little bothersome float or wallow over highway dips and swells. XRS models have overly aggressive tires that result in a firmer ride than other compact cars, but it’s never jarring.

Handling has its problems. Non-XRS Corollas suffer copious noseplow in fast corners and react sluggishly to rapid turns of the wheel. All models have a usefully tight turning radius and excellent brake-pedal modulation, but none has satisfying steering feel. Current Corollas have electric power steering assist that’s designed to save fuel. That system has slightly different calibrations depending on model, and it feels unnatural in all of them. XRS has sporting pretensions, but it isn’t likely to excite enthusiast drivers. On the plus side, that model provides decent grip in turns and is reasonably quick to respond to steering inputs. Among versions tested, steering feel has been poorest in the S, where gentle turns of the wheel can result in exaggerated motions.

Corollas offer fine wind suppression with little road noise, especially in models other than the XRS. Blame the XRS’ performance tires for kicking up a fuss on most road surfaces. Toyota’s 2.4-liter engine is smoother and more refined than the 1.8-liter.

Gauges are unobstructed and easy enough to read, on a straightforward, upright layout with no hint of a driver’s “cockpit” feel. Controls are orderly and obvious. All audio systems adjust volume levels according to vehicle speed and came with an auxiliary audio jack. The available navigation system has fewer features than systems in some other Toyotas-no voice recognition, for example-but programming is intuitive, and the device is relatively easy to use. Detail work took a noticeable step backward from the previous-generation Corolla. Though nicely grained, many interior panels have a hollow, plastic feel. XRS models have a monochrome gray interior that tries to be sporty, but comes off more as budget-grade.

Front seats are generally comfortable, but a lack of lumbar adjustment will disappoint some drivers. Taller drivers may wish for a bit more rearward seat travel. All models have a tilt-and-telescopic steering wheel. S and XRS sedans have extra lateral bolstering for better positioning in turns. Outward visibility is good.

All models have 60/40 split rear seatbacks that fold to create a portal to the trunk. The cargo hold is fairly wide and tall, but doesn’t extend far forward and has a tall bumper lip, small opening, and intrusive lid hinges. A large, two-tier glovebox and small center console box handle most cabin storage. Front and rear doors have map pockets, but most of their volume is devoted to space for 20-ounce bottles.