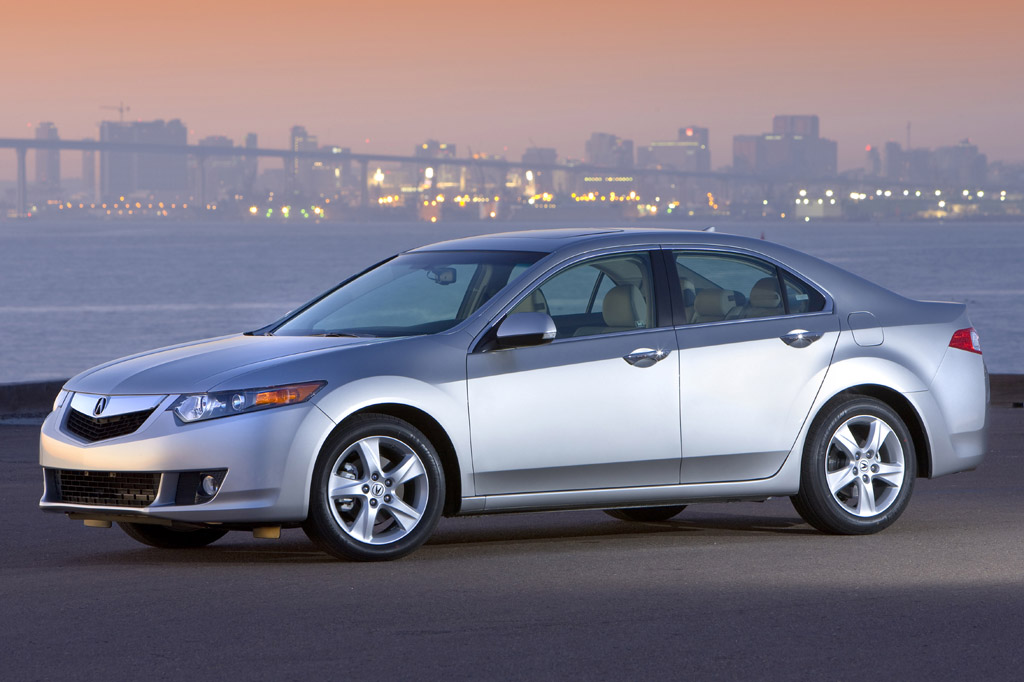 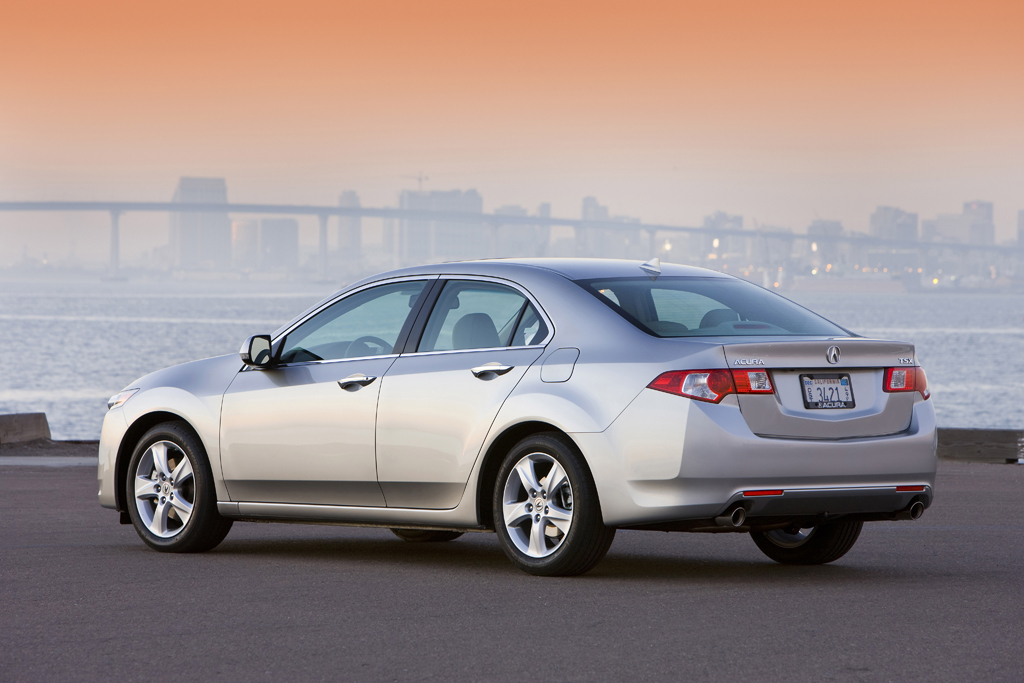 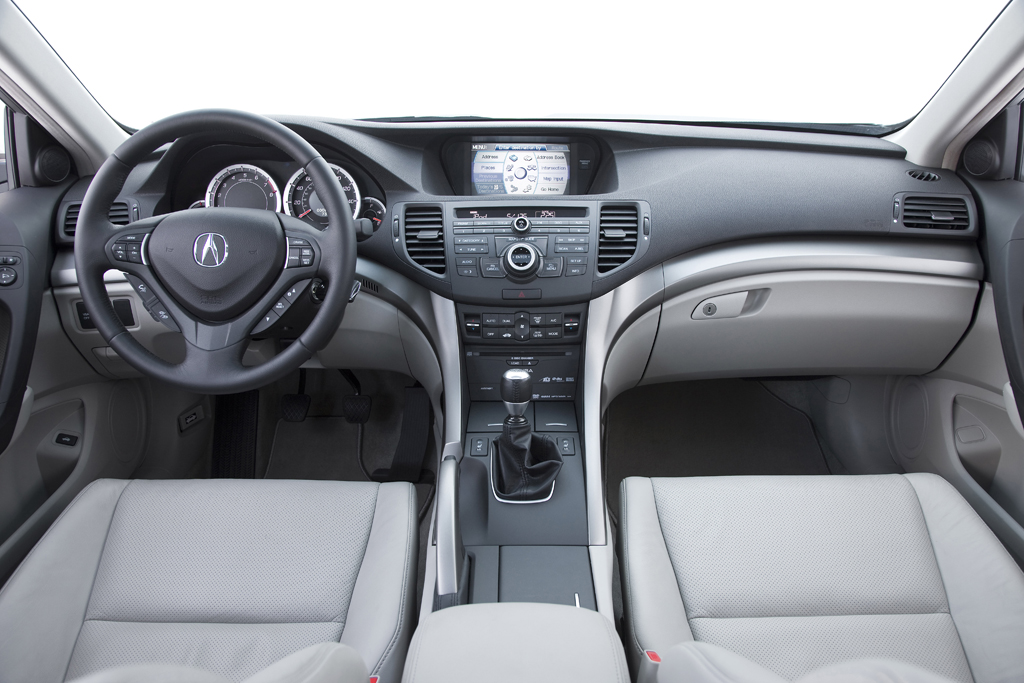 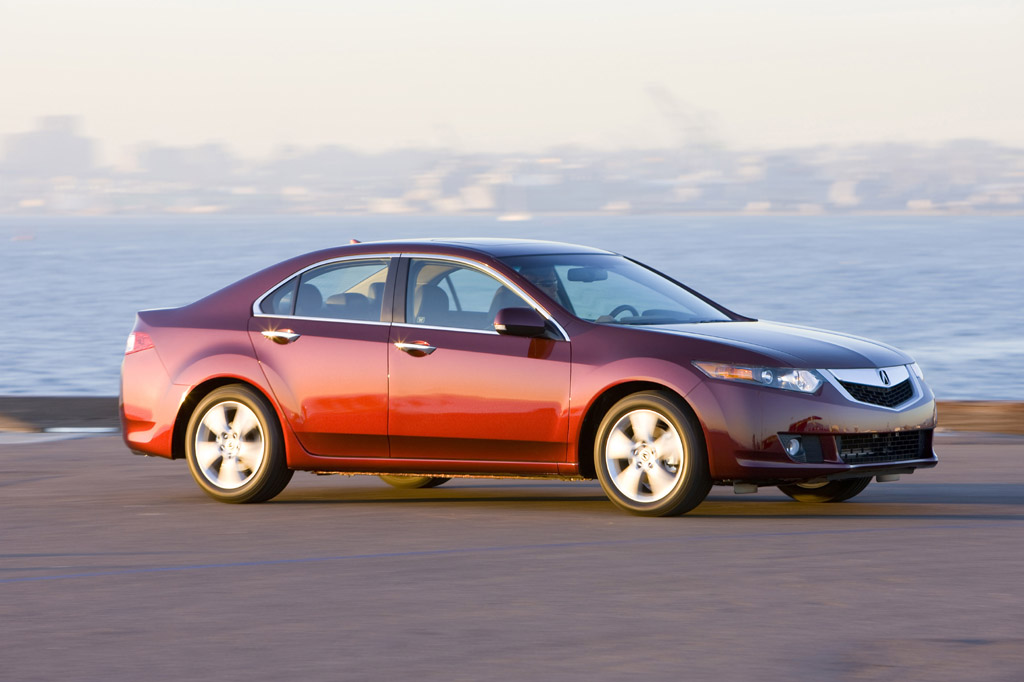 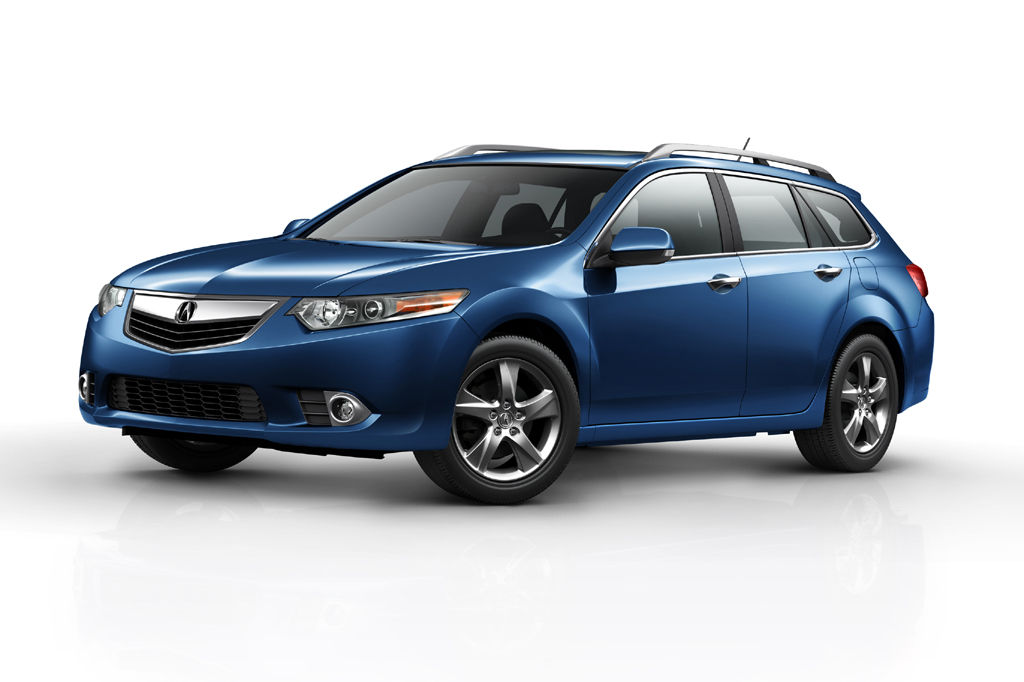 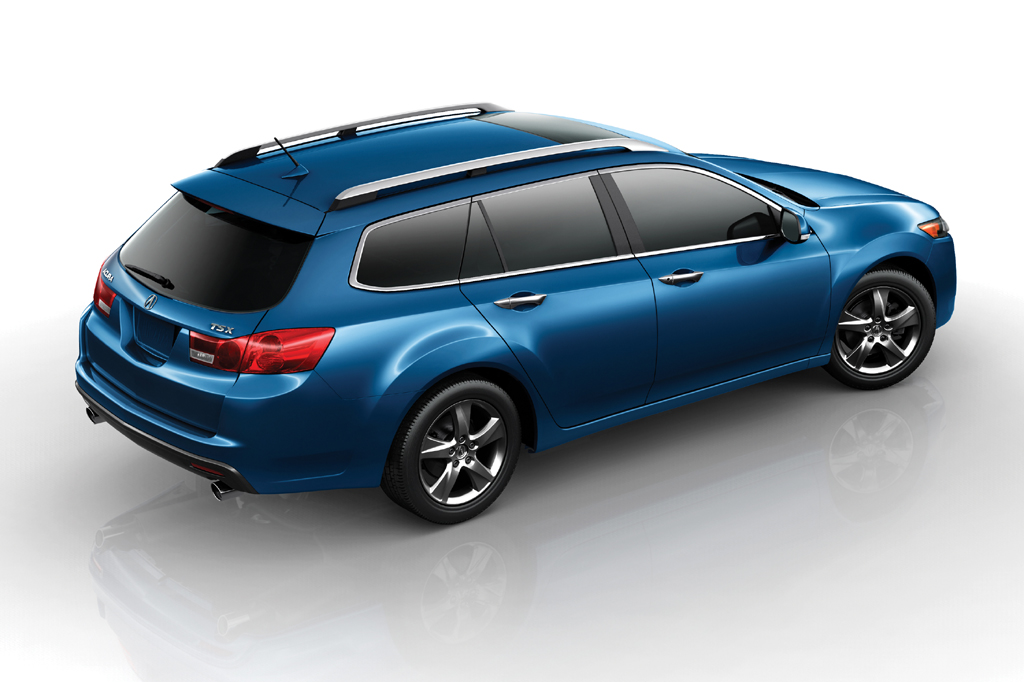 TSX is let down by a noisy four-cylinder engine, a cramped rear seat, and, when equipped with the available navigation system, a daunting control scheme. Its 2009 redesign, however, brought meaningful improvements in ride quality without sacrificing the TSX’s excellent handling characteristics. The manual transmission is particularly delightful. The V6 for 2010 was a welcome addition, delivering a refined engine note, great power, and reasonable fuel economy. These virtues, combined with competitive new-car pricing, make TSX a good choice-but strong resale value tends to keep used-car prices on the high side.

A redesign of Acura’s premium compact sedan for 2009 gave it freshened styling and new features. This front-wheel-drive sedan was Acura’s entry-level car. Featuring Euro-inspired styling that included a new signature “power plenum” grille and bold fender flares, the TSX shared some of its basic design with the European-market Honda Accord. Exterior dimensions grew moderately. The 2009 model was about an inch longer in wheelbase, 2.5 inches longer overall, and 3 inches wider than the 2004-2008 TSX. Interior dimensions were largely unchanged, though shoulder space grew by about 2.5 inches.

The sole engine was a 201-horsepower 2.4-liter four-cylinder teamed with either a six-speed manual or five-speed automatic transmission. The automatic included steering-wheel paddles to facilitate manual gear changes; they could be used in Drive mode at any time. The 2009 TSX came in a single trim level that included such standard features as a sunroof, wireless cell-phone link, leather upholstery, heated front seats, and dual-zone automatic climate control. Standard safety features included antilock brakes, traction control, an antiskid system, curtain side airbags, and front side airbags. An optional Technology Package, priced as a separate model, included a navigation system with real-time traffic and weather information; a rearview camera; and a 10-speaker, 415-watt surround-sound audio system. Competitors to Acura’s TSX included the Audi A4, BMW 3-Series, and Saab 9-3, as well as the Lexus IS and Volvo S40.

Acura’s 201-horsepower 2.4-liter four-cylinder engine mates with either a six-speed manual or five-speed automatic transmission. For 2010, Acura made a 280-horsepower 3.5-liter V6 engine available in the TSX sedan, but it came only with the automatic. It was not offered in the new-for-2011 Sport Wagon, which came only with the four.

Acceleration scores well with either engine. Manual-transmission four-cylinder models have surprisingly good low- and mid-range punch given an engine that produces its maximum horsepower at a rather lofty 7000 rpm. The 2009 TSX weighs about 150 pounds more than its predecessor but does not feel any slower. Light shifter and clutch action make this premium compact very easy to drive. V6 models make easy work of passing and merging, helped by a responsive automatic transmission.

An extra 2 inches of wheelbase compared to the previous generation added more stability to the TSX’s ride. Though it remains firm, bump absorption with four-cylinder models is very good, with little impact harshness. Credit Acura’s prudent tuning of the suspension and use of 17-inch all-season tires rather than larger and/or summer-only treads. The V6 model’s 18-inch tires don’t absorb road imperfections as well, but the ride is still generally composed.

Handling does not take a back seat to ride comfort. This premium compact carves corners with grippy assurance and little body lean. The electronic steering system offers light effort at low speeds but firms up nicely on the highway or through twisty mountain roads. The V6 models suffer some torque-steer wander, but it’s pretty well controlled. Braking action is drama-free, with short and controlled halts, but some test cars have suffered from slightly dull pedal action.

Acura has claimed that better aerodynamics and additional sound insulation reduced noise. That’s true when it comes to wind rush, which is well muted, but the four-cylinder engine sounds loud and unrefined, particularly as its speed rises. In contrast, the V6 has a great performance sound and is nearly silent at cruise. Coarse-surface tire thrum is more intrusive than expected from a premium car.

Gauges are large and easy to decipher at a glance. All TSX models have a center-mounted dashboard screen for audio, climate, and navigation functions. Those controls are all separate from each other and clearly marked, but the screen is prone to washing out in bright sunlight. The navigation system takes study to master all of its functions. Standard voice recognition helps, but any commands must be spoken slowly, loudly, and clearly. Each test TSX has exhibited solid assembly quality with nicely textured trim and plastics. A few interior panels are unappealing hard plastic that looks low-budget, but they don’t detract from the overall ambiance.

Despite an increase in cabin width of about 2 inches, the interior feels cozy overall. Front-seat legroom is good, and even taller occupants have sufficient headroom beneath the standard sunroof’s housing. Seats are nicely bolstered if a bit too firm for ideal comfort. Visibility is good all around, though the outside mirrors are on the small side.

Rear seats are somewhat disappointing, given this vehicle’s longer wheelbase versus its predecessor. Legroom is cramped even if the front seats are not set far back. Fortunately, the angle of the rear seatback prevents the sunroof housing from stealing too much headroom, though taller passengers may find head clearance lacking. Foot space in the back is tight unless the front seats are raised high.

A wide aperture and low deck are thoughtful, but the sedan’s trunk narrows quite a bit between the rear tires, limiting its usefulness for hauling bulky items. Oddly, the trunk has traditional lid hinges rather than compact strut-type units, though they steal little cargo space. Wagons have a one-piece liftgate; power operation is included with the Technology Package. The load floor is low and flat, but it narrows somewhat between the rear wheel wells. Shallow bins under the load floor add a bit more storage space for valuables. In both body styles, storage pockets in all four doors help compensate for the somewhat small glovebox and center console bins.