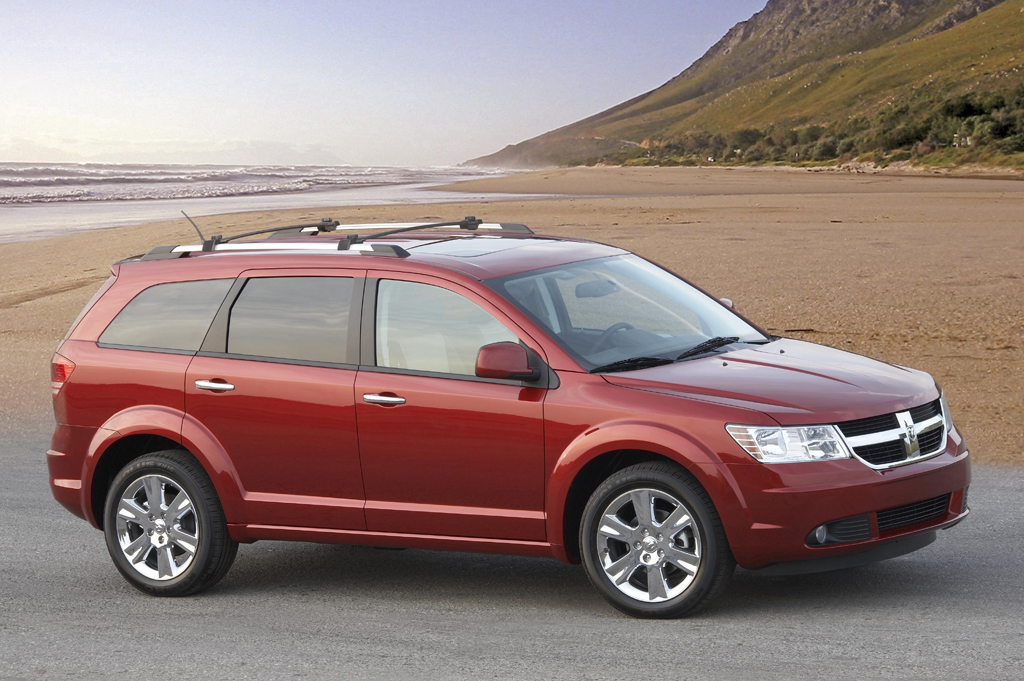 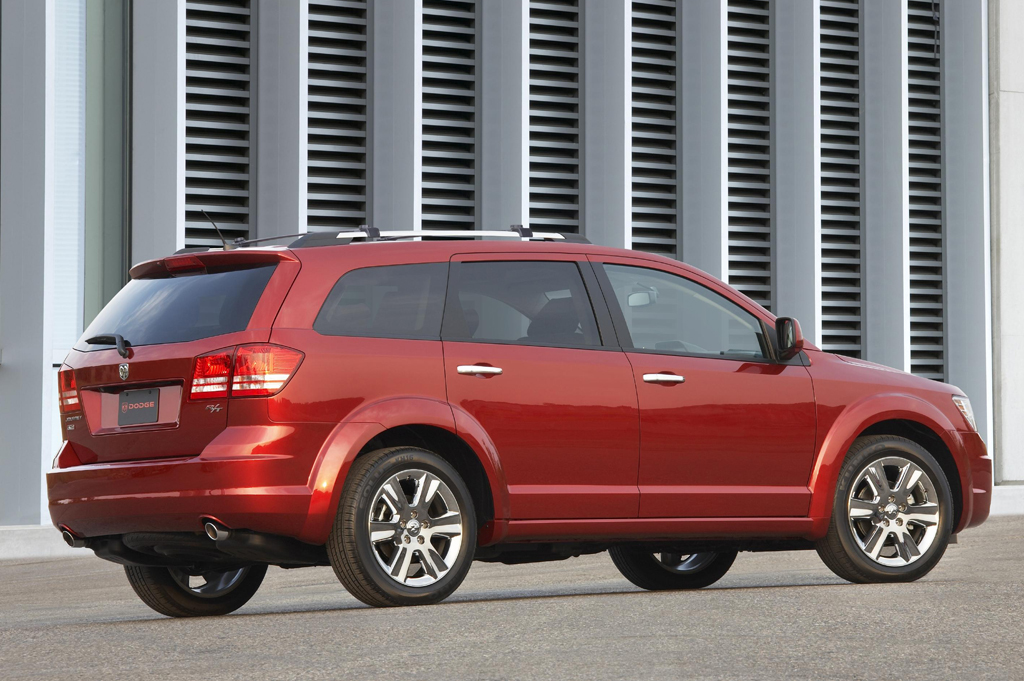 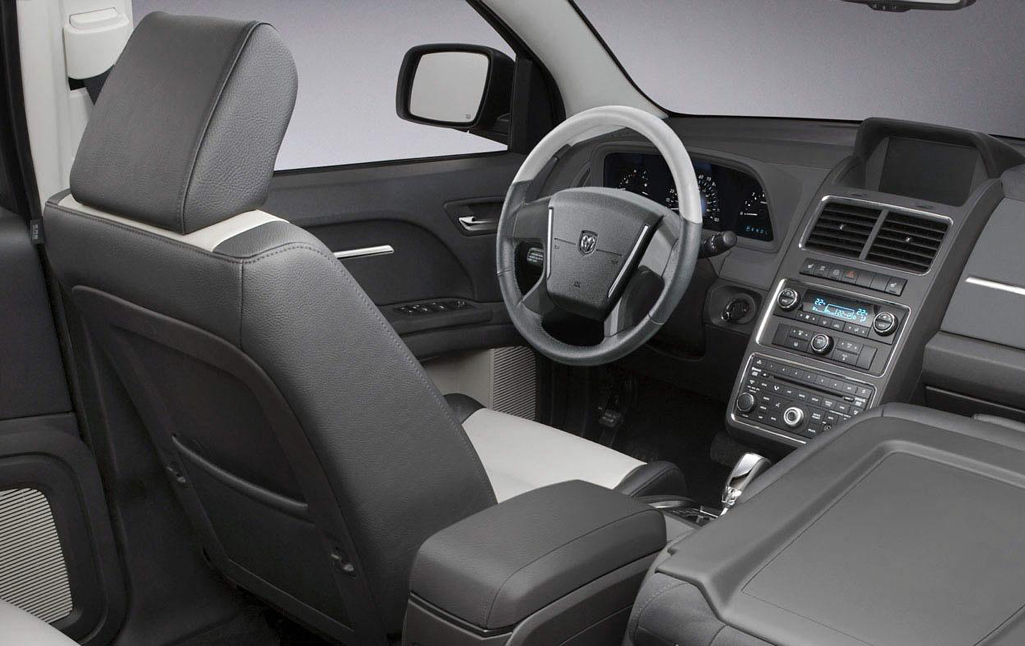 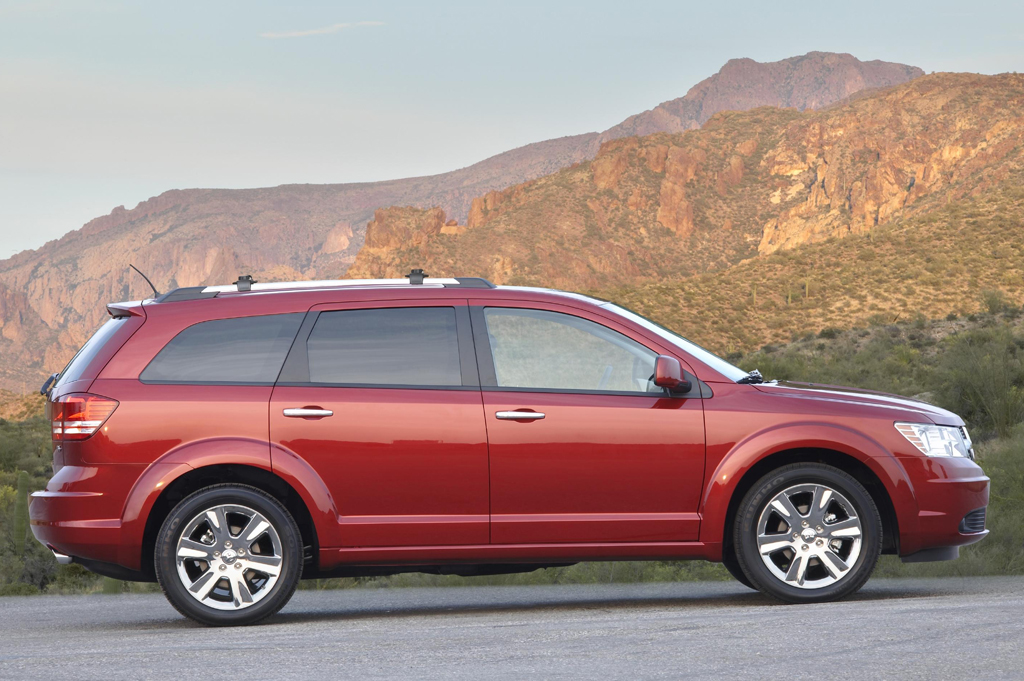 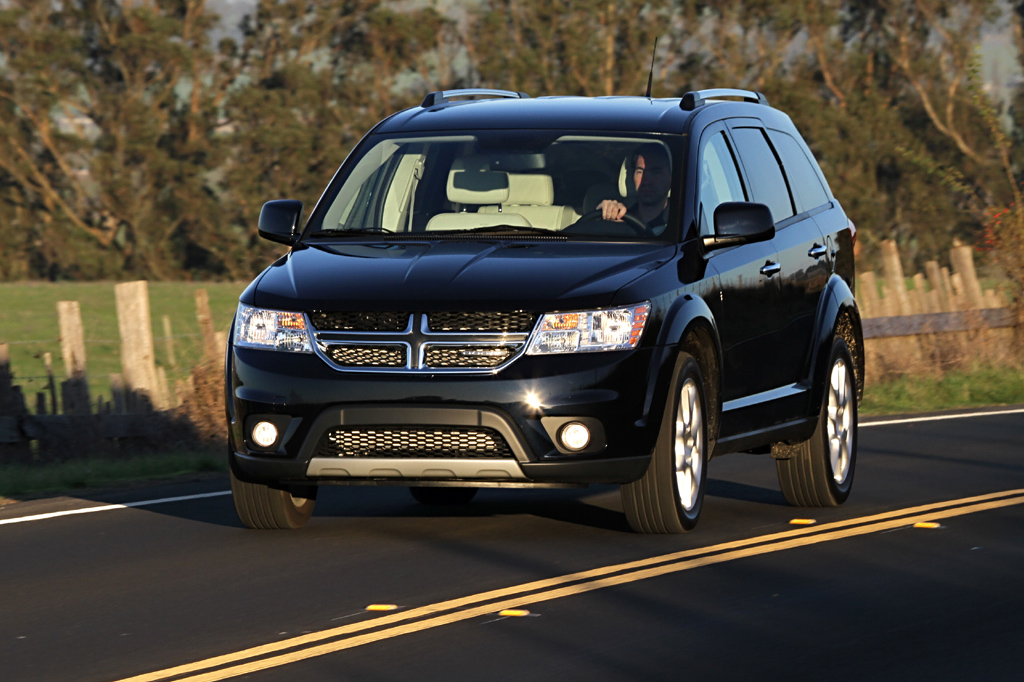 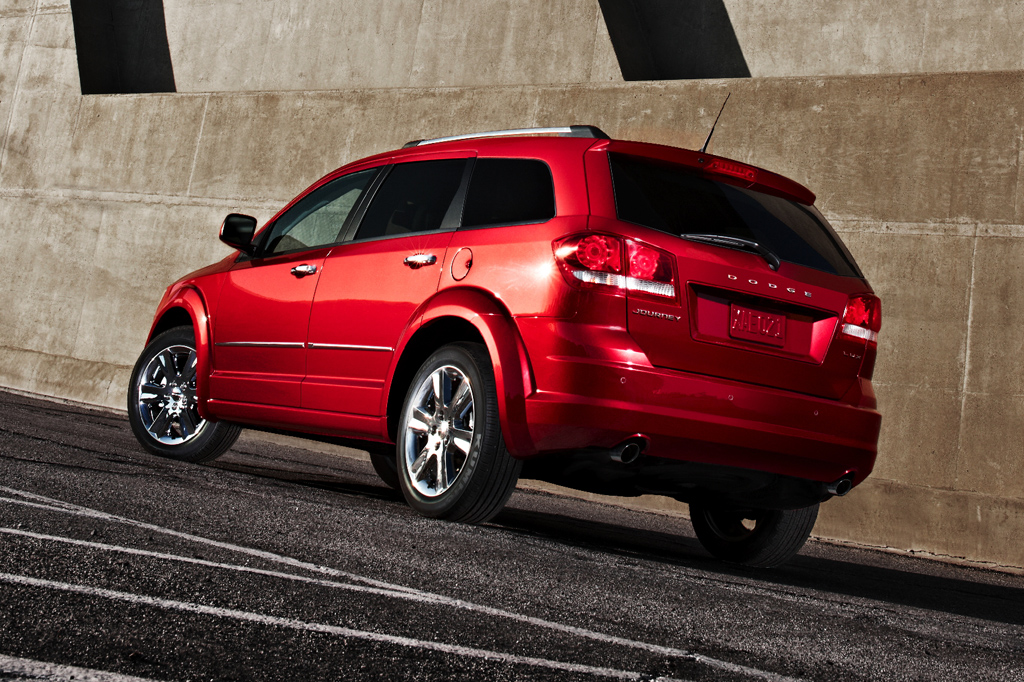 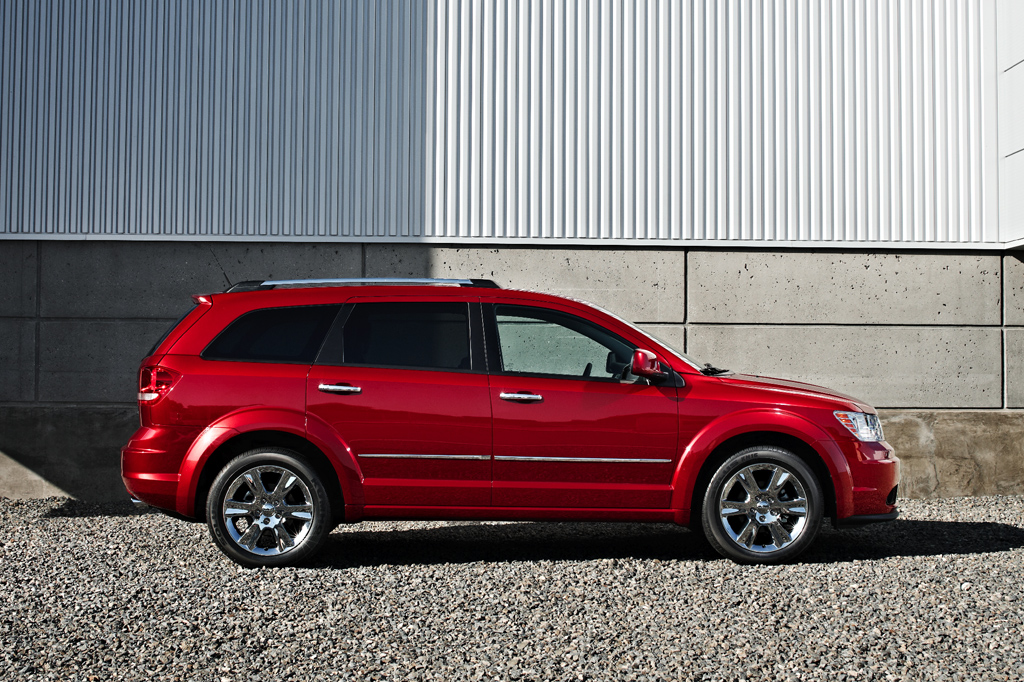 With Journey, Dodge finally had an SUV that appealed more to families than to folks looking for a tow vehicle. When powered by the available V6, this Recommended pick is a moderately sporty people-mover with clever storage options and, with the available third-row seat, space for up to seven. Though cabin decor is a bit austere, Dodge priced Journey aggressively as a new vehicle and made most expected safety features standard. Note that four-cylinder models have too little power and overly soft suspension tuning.

With the 2009 introduction of the Journey, Dodge finally entered the crossover SUV market. Built in Mexico, Journey slotted between Dodge’s Nitro and Durango midsize sport-utility vehicles. Unlike Nitro and Durango, Journey was a car-type SUV that sat lower to the ground and had a less off-road-capable drivetrain and suspension than those vehicles. Journey seated five in base trim and up to seven with the Flexible Seating Group that included a 50/50 split third-row seat. Three models were offered. The base SE had a 173-horsepower 2.4-liter inline four-cylinder engine with a four-speed automatic transmission, and came only with front-wheel drive. Uplevel SXT and R/T models used a 235-horsepower 3.5-liter V6 with six-speed automatic, and were available with either front- or all-wheel drive. Base SE models had 16-inch wheels. Front-drive SXTs had 17-inch wheels and a sport suspension. All-wheel-drive SXTs and all R/Ts had 19-inch wheels and a more performance-oriented suspension.

Standard safety features included antilock brakes, traction control, an antiskid system, curtain side airbags that covered all seating rows, and front side airbags. Storage features included an available flat-folding front passenger seat with an under-cushion storage bin, additional bins in the second-row foot well, and under-floor storage in the cargo area. Also available were second-row seats with built-in child-safety cushions, a beverage-chilling glovebox, and a navigation system. Chrysler’s Uconnect multimedia suite, which had a 20-gigabyte hard drive for storing pictures or digital music files, was optional. So was a navigation system that included real-time traffic information. Rivals to the Journey included the Honda Pilot, Kia Rondo, and Toyota Highlander.

Four-cylinder and V6 engines have been available for the Journey. Four-cylinder models hold a 2.4-liter four rated at 173 horsepower mated to a four-speed automatic transmission. Early V6 editions had a 235-horsepower 3.5-liter V6 and six-speed automatic, but that engine was swapped for a 283-hp 3.6-liter V6 for 2011. Journey models come with either front-drive or all-wheel drive.

Acceleration depends on engine choice. With the four-cylinder engine, Journey struggles to gather passing and merging power, but it keeps up with urban traffic acceptably well. With a V6, it has adequate power for any situation. Transmission behavior in tested V6 models has been inconsistent-some showed quick downshifts for more power, while others were more leisurely.

Fuel economy falls short of frugal. AWD V6 Journeys have averaged 17.8 to 18.3 mpg. Four-cylinder models and those with the 3.6-liter V6 use regular-grade gasoline, but Chrysler recommends mid-grade 89 octane for the 3.5-liter V6. Note that all-wheel-drive models have a 21.1-gallon fuel tank, while front-drive versions have a 20.5-gallon tank.

Ride quality scores best in all-wheel-drive V6 Journeys. All models tested have filtered out road imperfections with commendable ease. SE models have the smallest wheels and tires and the softest suspension tuning. As such, they are prone to float over larger dips and swells. AWD SXT and R/T models are better composed overall.

All Journeys have responsive steering with little on-center sloppiness. Softly sprung SE models suffer from a surprising amount of lean in cornering. SXT and R/T models are better poised around corners. All models have responsive brakes with reassuring pedal feel.

Road noise is well muted, even on coarse pavement. Neither engine sounds quite as refined as rival four-cylinder or V6 powertrains, but they’re not annoyingly loud either.

Major gauges are large and generally easy to read, though the thick steering wheel blocks the view of some dials. Models with the available hard drive, but without navigation, suffer from a screen set too low on the dashboard to be read easily at a glance. That screen also washes out in even moderate daylight. Likewise, all audio controls sit too low for easy access. On models equipped with navigation, the screen is located at the top of the dashboard for vastly improved visibility.

Generally handsome cabin decor is marred by excessive use of hard plastics and unpadded materials. Early test models exhibited poor fit and finish with misaligned interior panels. Dodge appeared to address assembly issues, as more recent test models have exhibited none of the panel gaps and other fit/finish problems that plagued initial versions. The available leather upholstery goes a great distance towards improving the general ambiance, but nearly all class competitors come off as more upscale.

Supportive front seats with ample headroom and legroom make the Journey long-trip friendly. The standard tilt-and-telescopic steering wheel is a nice touch. Visibility to the rear corners is restricted by thick roof pillars, and the available fold-from-the-ceiling DVD screen completely blocks the view aft when in use.

The second row provides more than adequate legroom for six-footers, though headroom is limited for anyone much taller. Knee clearance gets tight when the seats are moved far back. The third-row seat is sized for kids only, though the sliding second-row seat can increase legroom somewhat. The available booster seats are a boon for families with children who have outgrown their car seats.

In addition to the deep center console and upper and lower glove boxes, a Journey may be equipped with a storage box under the front passenger-side seat cushion, small-item compartment, and two good-sized footwell storage compartments in the second row. A large, deep storage tray might also be found beneath the rear load floor. Seven-passenger models make do with a smaller rear compartment, limited to the area behind the rear bench. Note that the front passenger seat folds flat to create an impressive load floor. Second- and third-row seats fold flat easily and feature long tether straps for pulling the seats back up without having to climb inside. A pop-out flashlight in the cargo area is a handy convenience.