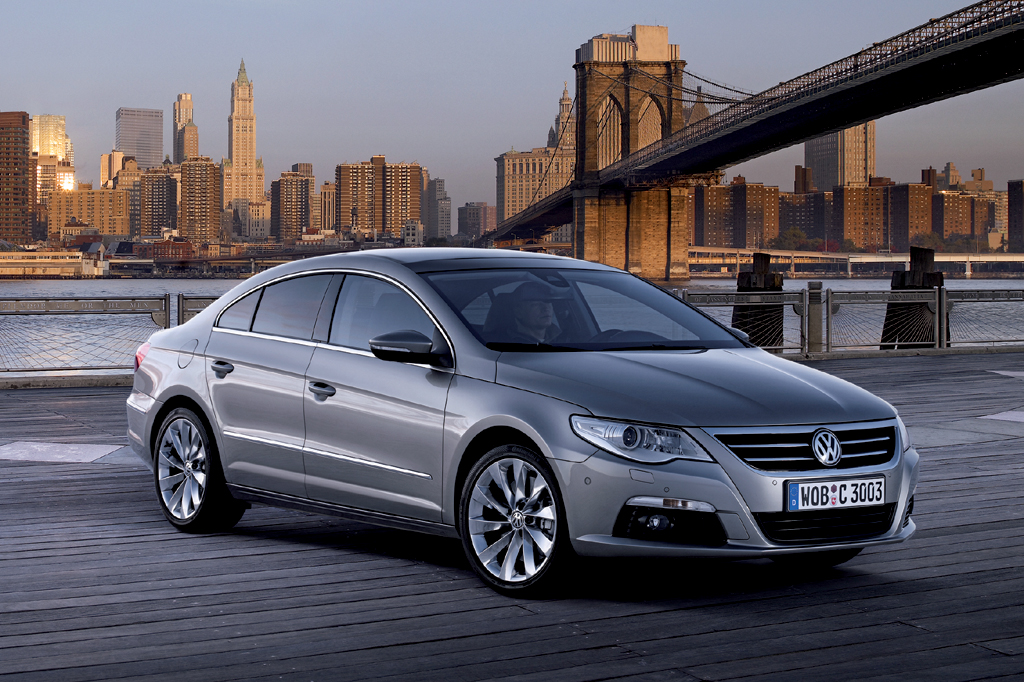 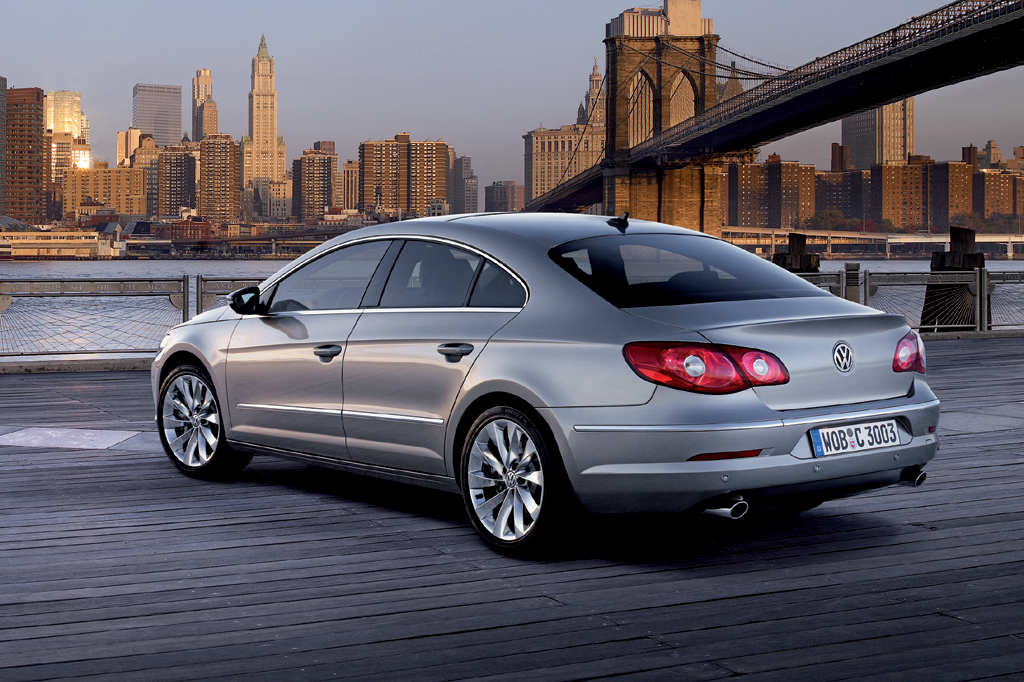 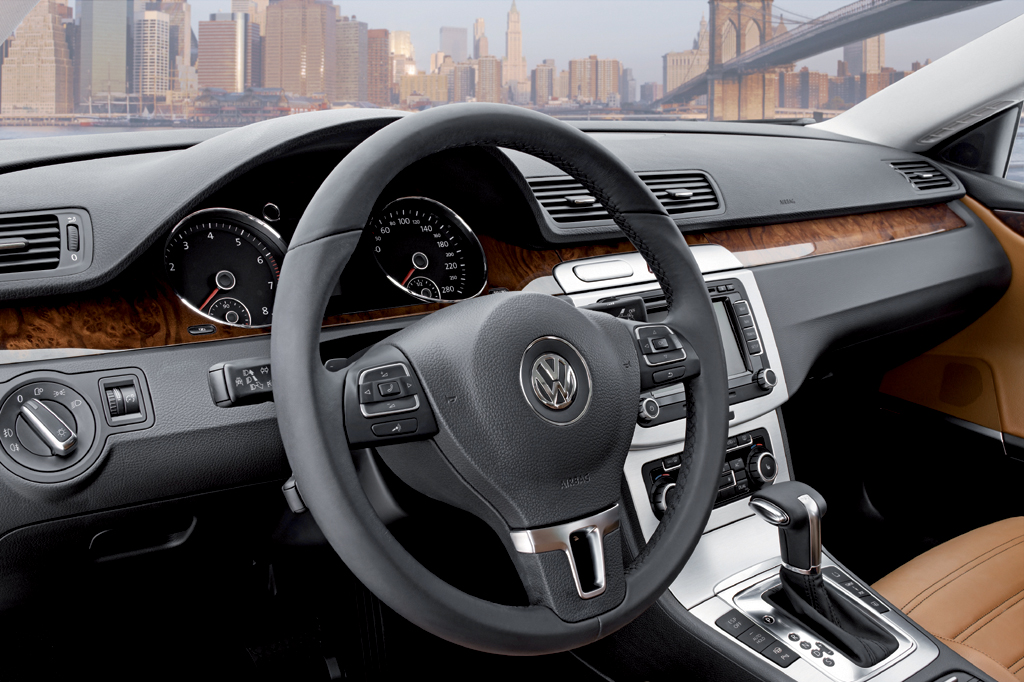 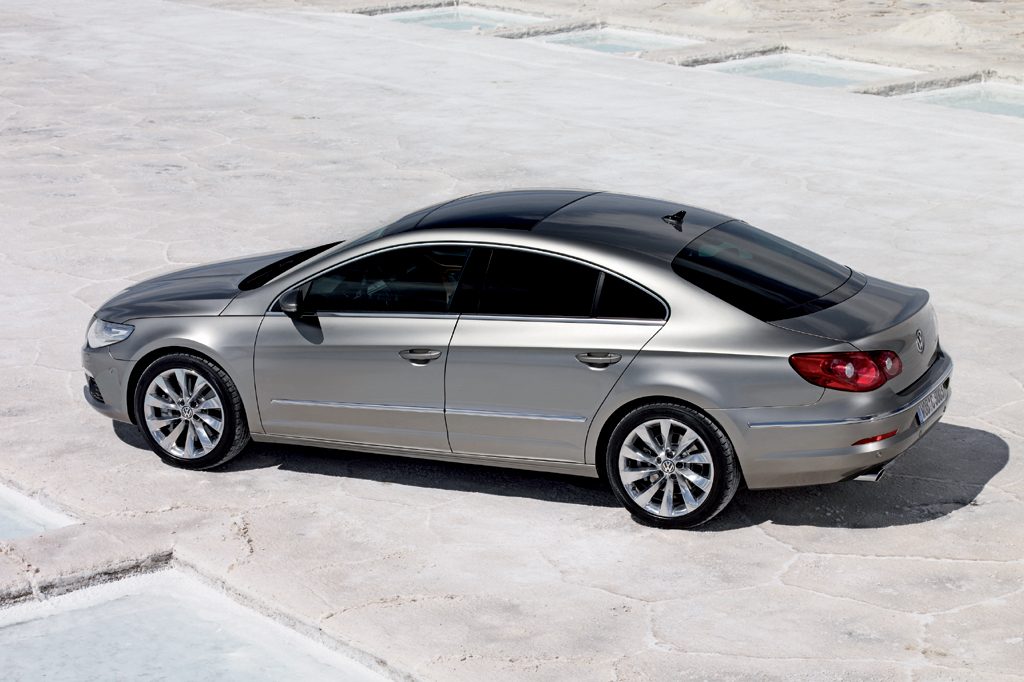 Volkswagen’s CC appeals for its strong and refined turbocharged four-cylinder engine, impressive ride and handling, top-notch interior design, and standout styling. Good four-cylinder fuel economy is an added bonus. If you’re willing to sacrifice five-passenger capacity and pay a price premium over traditional Passat models for the sake of style, check out the Best Buy CC. Otherwise, its Passat sibling may better suit your needs. If you prefer a VR6 model and live in the snowbelt, the 4Motion edition would be a sensible choice. Four-cylinder CCs have been holding their value a bit better than V6 models, and may therefore be comparatively higher-priced as used cars.

For 2009, Volkswagen introduced a new premium midsize sedan that shared its basic design with the German automaker’s Passat. Unlike that traditional-styled sibling, the four-door CC had a sleeker, coupe-like roofline and seated four occupants instead of the usual five. CC sedans came in four trim levels: Sport, Luxury, VR6 Sport, and VR6 4Motion. Two engines were available. Standard on Sport and Luxury models was a 200-horsepower 2.0-liter turbocharged four-cylinder. In Sport versions, that engine teamed with a six-speed manual or six-speed automatic transmission. Luxury CCs were automatic-only. Powering VR6 Sport and VR6 4Motion versions was a 280-horsepower 3.6-liter V6, paired solely with a six-speed automatic. Volkswagen’s automatic transmission could be manually operated using the floor shifter in four-cylinder models, or via steering-wheel paddles in V6 versions.

Four-cylinder models and the VR6 Sport came only with front-wheel drive; the VR6 4Motion sedan had all-wheel drive. Standard safety features included antilock brakes, traction control, an antiskid system, curtain side airbags, and front side airbags. Rear side airbags were optional. Leather upholstery, a power pop-up-only sunroof, and front and rear obstacle detection were standard on all models except the four-cylinder Sport. An optional Technology Package, available for all except that four-cylinder Sport, included a navigation system with a rearview camera. Rivals included the Nissan Maxima, Pontiac G8, and Volvo S60, along with the Cadillac CTS.

Two engines have been available for Volkswagen’s CC. The turbocharged 2.0-liter four-cylinder develops 200 horsepower, working with either a six-speed manual or six-speed automatic transmission. For 2010, an automated-manual six-speed gearbox replaced the prior conventional automatic. VW’s 3.6-liter VR6 (V6) engine makes 280 horsepower, driving a six-speed automatic transmission. Most CCs have front-wheel drive, but the VR6 4Motion model has all-wheel drive.

Acceleration excels with either engine. Following a brief delay, the turbocharged 2.0-liter four-cylinder engine moves the CC with impressive pep from a stop and delivers decent mid-range and highway-passing power. The manual transmission has a crisp, sporty feel. Delay in power delivery is more pronounced with the automated-manual transmission, which also lacks smoothness compared to most premium-midsize rivals. Shifts are prompt, but sometimes lurchy. With the effortlessly responsive V6 engine, performance is abundant when it’s most needed: to pass or merge.

Fuel economy is thrifty for the class. With manual shift, a 2.0T sedan averaged 26.7 mpg. Another 2.0T model with the automated-manual transmission averaged 24.5 mpg. Volkswagen recommends premium-grade gasoline for all CCs.

A CC is very solid and stable at highway speeds. Though the ride errs on the firm side, only sharp pavement imperfections come through as overly harsh.

Wind rush is well isolated, but road roar and tire thrum are evident at higher speeds.

The four-cylinder engine growls appropriately under brisk acceleration, but is nearly silent at all other times. Volkswagen’s VR6 engine is quite refined, though the 4Motion all-wheel-drive powertrain is more noticeably heard than some other AWD systems.

The Sport model’s climate dials are large, clear, and simple to operate. Luxury models have dual-zone climate controls that are well-lit and also intuitive to use. The available navigation system works well, but could have been set higher for easier reading. Volkswagen’s navigation system absorbs some audio functions, but does not overly complicate them. Padded surfaces abound inside each CC. Top-quality materials create an attractive, comfortable, well-made cabin. The Sport’s leatherette seats and faux-metal plastic trim are credible imitations and still feel class-appropriate. The Luxury model’s leather surfaces, brushed metal trim, and chrome accents convey a classy, up-market look and feel.

Front occupants get generous headroom and legroom. The supportive, bolstered seats are road-trip pleasant. Comfort is further enhanced by a standard manual tilt-and-telescopic steering wheel, and the Luxury model’s power driver and passenger seats. Visibility to the rear is impeded by a steeply raked rear window and high rear deck.

The CC’s back seat provides decent legroom for the average-sized rider and has space for two in nicely-supportive seats. Taller passengers may need more headroom-a concession to CC’s rakish roofline. For 2013, the rear seat now sat three rather than two previously. Trouble was, accommodations for that extra person are marginal. The center section of the seat is harder and less comfortable than the other seats, a hump in the floor cuts into legroom, and the overhead console further compromises the already limited headroom.

The trunk’s load height is low enough for easy loading, but the opening is small and its hinges intrude into cargo space. For more cargo room, the 60/40 rear seat folds almost flat with ease. The cabin is filled with small-item storage cubbies that include a deep front center console, a smaller rear center console, and a large latched bin to the left of the steering wheel.