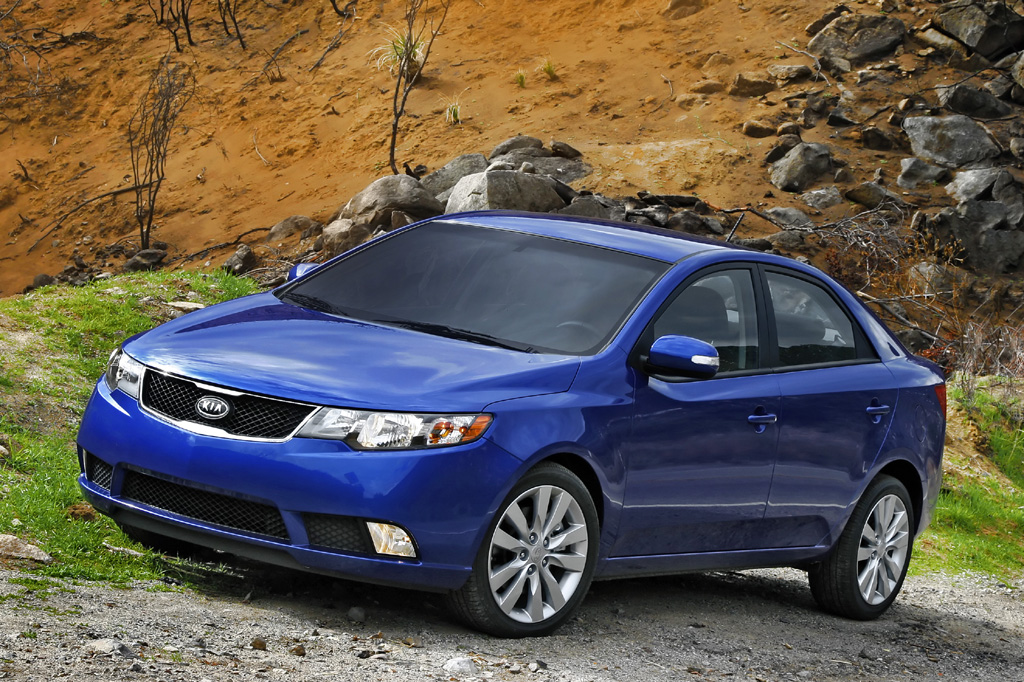 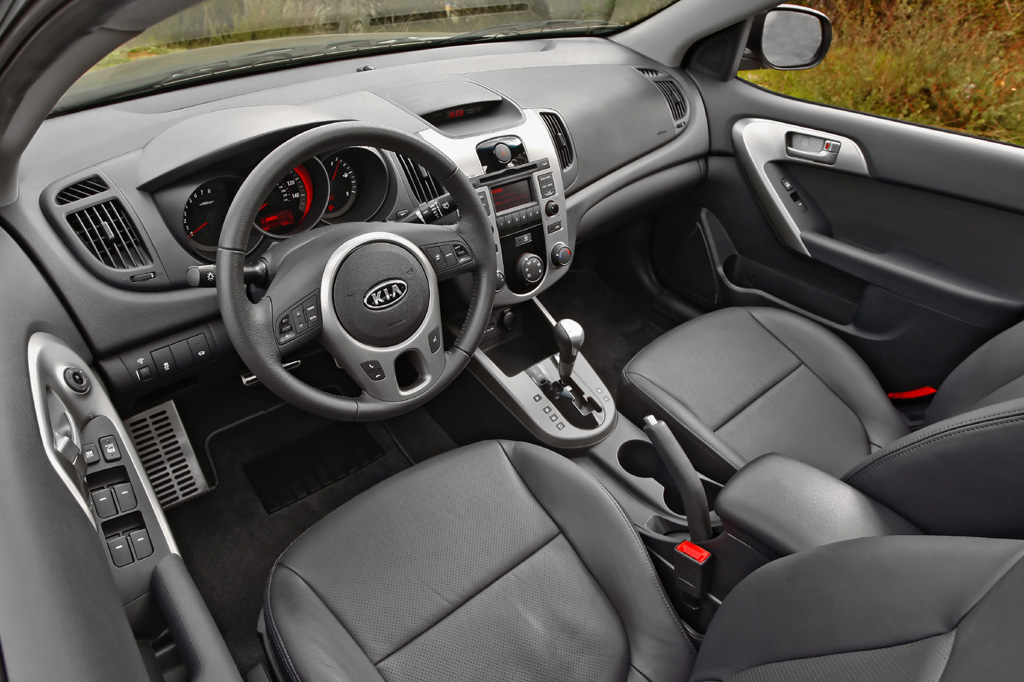 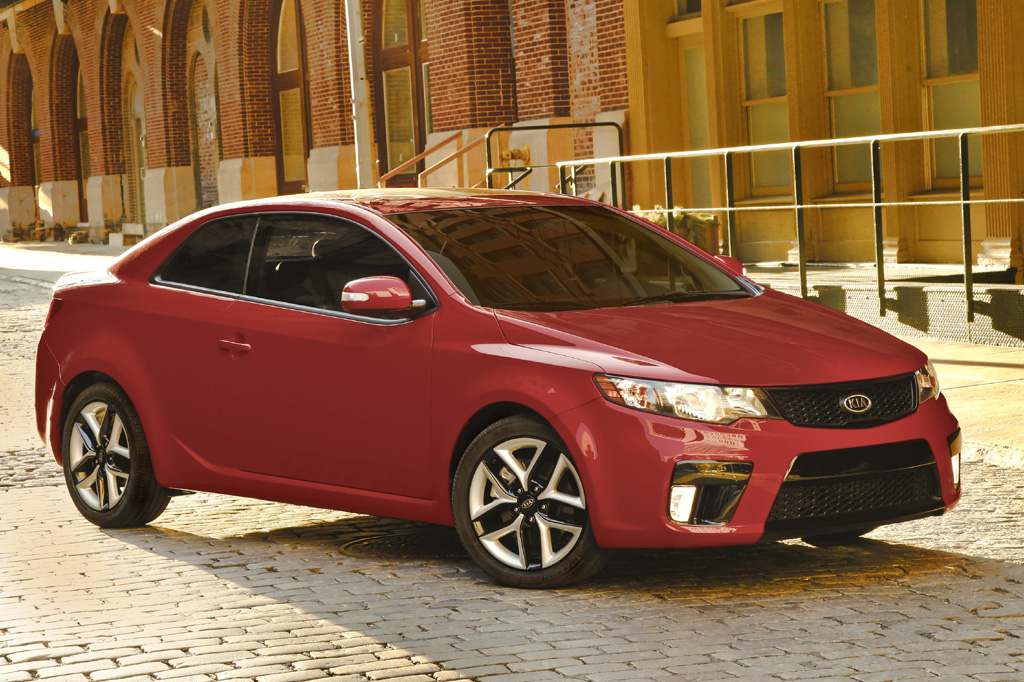 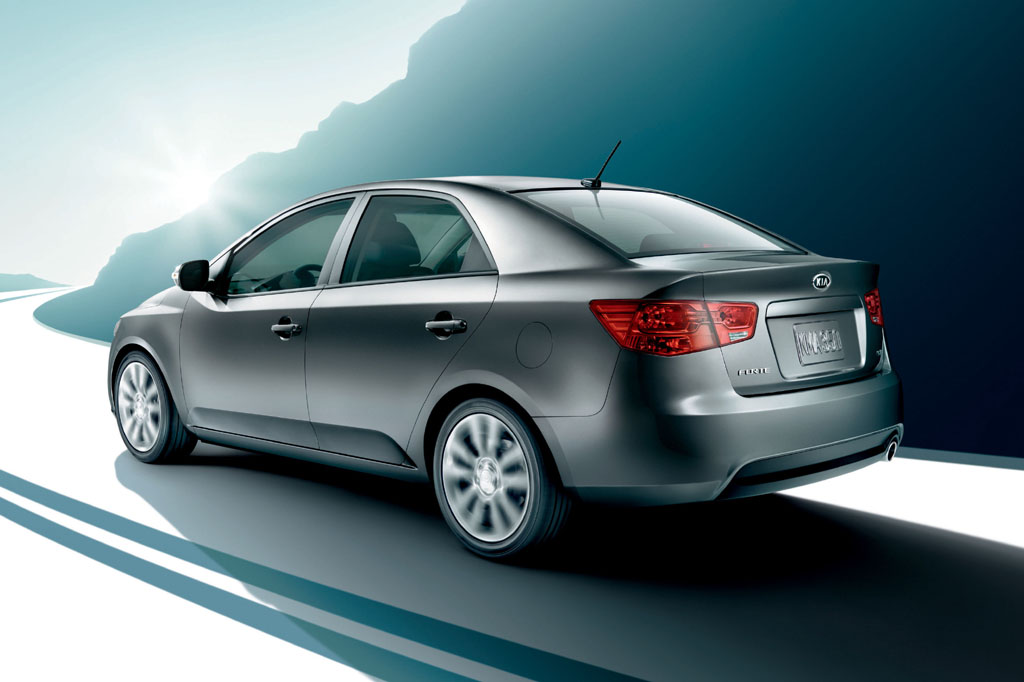 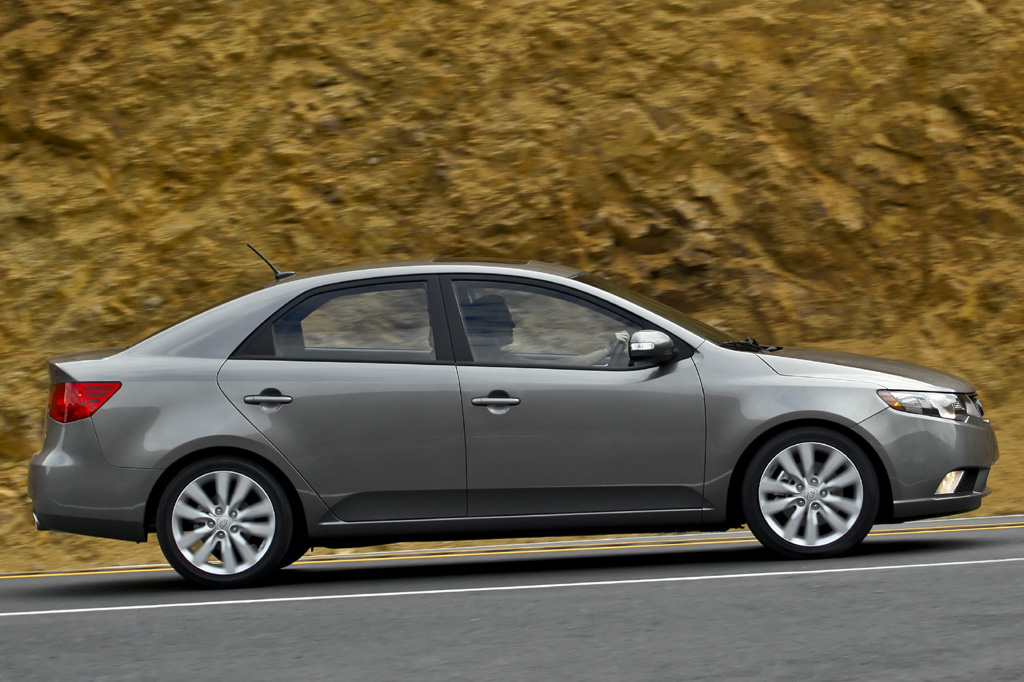 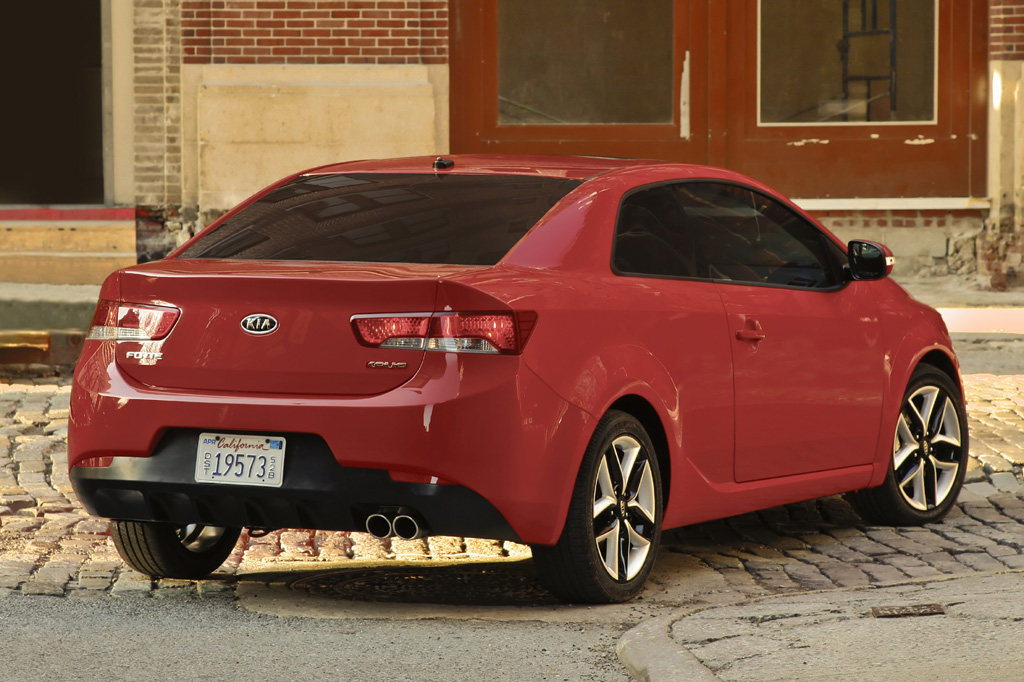 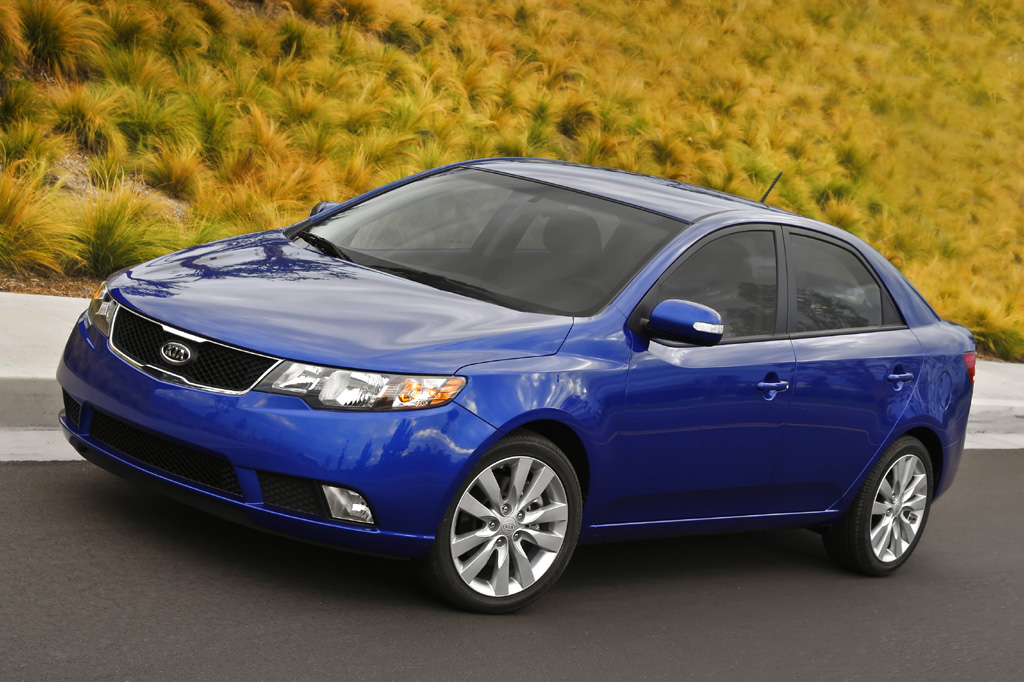 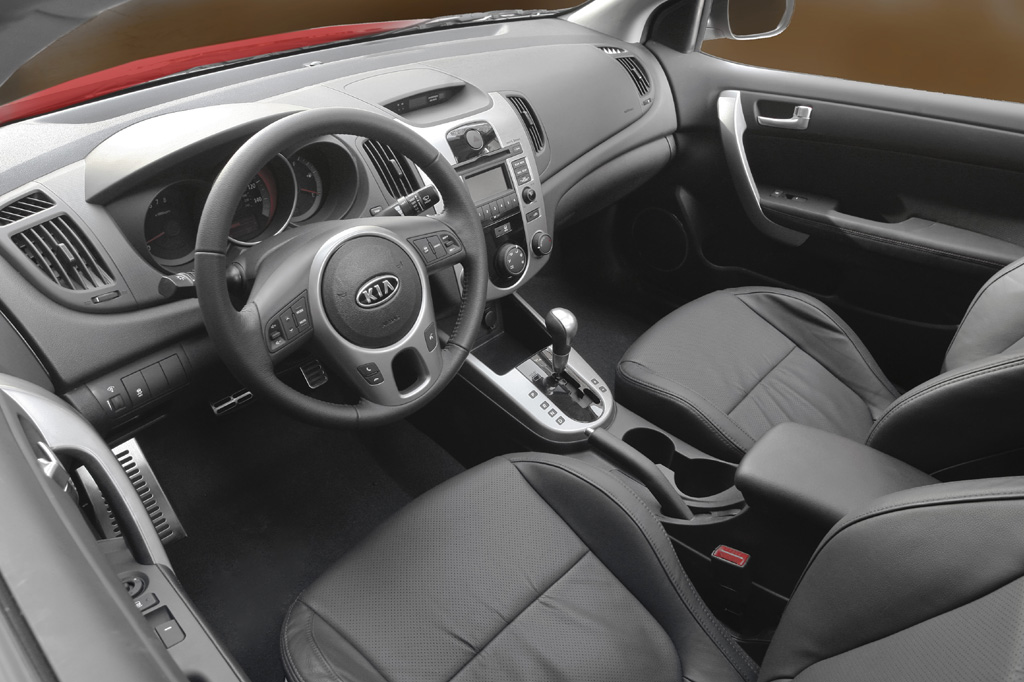 Kia’s latest compact-car contender boasts ample-for-the-class passenger and cargo space along with a generous list of standard comfort, convenience, and safety features. Forte’s performance, road manners, and overall refinement are pleasant enough, though not as polished as class leaders. Avoid the balky manual transmission in a 2010 model, with its notchy throws and vague clutch. Improvements to the 2011 Forte are most welcome. The new six-speed automatic transmission is slick, and the revised six-speed manual is vastly better than its five-speed predecessor. Ride quality on the sporty SX model is smoother as well. Availability of a hatchback body style provides added versatility. That model is not as much fun to drive, nor is it as refined as the Mazda 3, but Forte can cost considerably less secondhand. In all, the solidly made Forte is worthy of a spot on the budget-conscious compact-car shopper’s list.

Kia replaced the previous Spectra with an all-new Forte for 2010, now serving as this Korean automaker’s compact car. Forte came as a four-door sedan that was about 1.5 inches longer in wheelbase and 1 inch longer overall than the outgoing Spectra, and as a two-door coupe called the Forte Koup. Both the coupe and sedan came in EX and sporty SX trim levels. The sedan also came in base LX trim. Two four-cylinder engines were offered. LX and EX held a 156-horsepower 2.0-liter engine that teamed with a standard five-speed manual or optional four-speed automatic transmission. An optional “Fuel Economy Package” for EX sedans included a five-speed automatic and other fuel-saving equipment. SX models had a 173-horsepower 2.4-liter engine with a standard six-speed manual or optional five-speed automatic. Standard safety features included antilock braking, traction control, an antiskid system, curtain-side airbags, and front-side airbags. A wireless cell-phone link, auxiliary audio input, and USB port were standard on all models. Air conditioning, power windows and locks, and remote entry were standard on the EX and SX. Leather upholstery and a sunroof were available on the EX and SX editions. SX had a standard sport suspension and tilt/telescopic steering wheel. Forte rivals included the Honda Civic, Mazda 3, and Nissan Versa.

A 2010 Forte with the 2.0-liter engine is fine in around-town driving, but it needs a deep stab of the throttle to deliver adequate highway passing power. The alert four-speed automatic shifts smoothly. The 2.4-liter engine is stronger in all situations, though it suffers from non-linear throttle response. The five-speed automatic shifts smoothly, but the initial six-speed manual shifter has long throws and a rubbery, imprecise feel. The clutch pedal’s takeup is soft and indistinct, making it very difficult to launch the car smoothly. As revised for 2011, the six-speed manual is a huge improvement over the prior five-speed. It’s not quite as much fun as the gearbox in a Honda Civic or Mazda 3, but Kia’s latest shifter has a positive feel. Clutch engagement also is much smoother in the 2011 Forte. Similarly, the 2011 six-speed automatic provides smooth, timely shifts with no discernible acceleration penalty.

Non-SX Fortes ride generally smoothly, with good bump absorption for the compact-car class. On all models, composure over sharp bumps and dips doesn’t match that of class leaders. Initial SX versions had 17-inch wheels and a sport-tuned suspension, delivering a ride that’s borderline harsh. Among Forte’s many changes for 2011 was a revised suspension for the SX. Though still quite firm, that suspension does a much better job of absorbing bumps of all sizes. Composure at highway speeds is also very good.

While not as buttoned down as its main Japanese rivals, the reasonably sure-footed Forte more than holds its own. The solid-feeling body structure helps in quick cornering. Body lean in corners is noticeable but not unseemly. Steering feel is fine on the highway but a bit heavy at low speeds. SX models have sharper moves. Braking control and pedal feel are first-rate: smooth and progressive.

Quietness is Forte’s primary weakness. Both engines are noisy in fast acceleration, with the 2.0-liter unit being quieter at cruising speeds. The SX’s 2.4-liter engine is buzzy and unrefined while accelerating, and those sounds never fully go away. Any wind noise is masked by the loud engine and copious tire and road ruckus. The hatchback’s open cargo area exacerbates the latter issue. Coarse highway surfaces can bring about intrusive tire thrum, especially on the SX. Wind noise is reasonably muted on the EX, not so much with the SX.

Large, clearly marked main gauges are tunneled and backlit for good visibility in all light conditions. SX models have flashier gauge graphics that are still easy to read. All audio and climate controls are within easy reach. The audio system has clearly marked buttons; climate controls are large, handy knurled dials. Auxiliary audio and USB jacks and a 12-volt power outlet are conveniently grouped together. All Fortes have steering-wheel-mounted audio, cruise-control, and wireless-cell-phone-link buttons. The optional navigation system absorbs some audio functions, but its large touchscreen compensates. Some navigation functions, such as turning off voice guidance, are a bit touchy. Cabin materials are price-appropriate, and everything is well assembled. Optional leather upholstery brings a slightly upscale vibe.

Forte benefits from a tall seating position that aids visibility. Sedans and hatchbacks have sufficient front headroom and legroom for tall adults, even with the optional sunroof. Coupes have a lower roof line that significantly compromises headroom, especially with the sunroof. Overall visibility is good, though the thick rear roof pillars mildly hamper the view to the rear corners. Unfortunately, a tilt and telescopic steering column has been available only on SX models; LX and EX models offer only a tilt column.

Sedans and hatchbacks have adequate rear headroom and legroom for most adults, even with the front seats adjusted far back. However, the back seat is too narrow for comfortable three-abreast adult seating. Entry and exit are impeded slightly by narrow door openings. Coupe rear seats are sized for children and difficult to access.

Forte’s total cargo volume is at the head of the class among compact four-door sedans. The relatively roomy trunk has a helpfully large aperture, though the uncovered sickle-shaped hinges can intrude slightly on cargo space. Split-folding rear seats can be folded from the rear of the vehicle via trunk-mounted latches. Interior small-item storage is better than average, with a roomy center console and glovebox along with useful door pockets. Coupes give up about 2 cubic feet of cargo volume and have a shorter trunk opening. Hatchbacks have a versatile cargo hold with a low load deck.