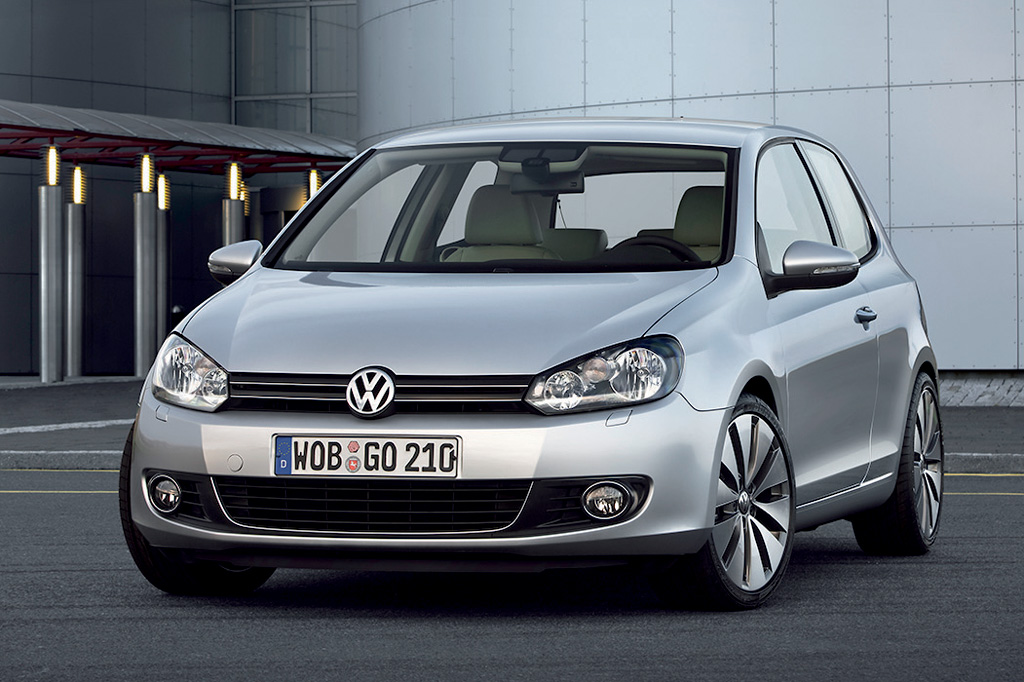 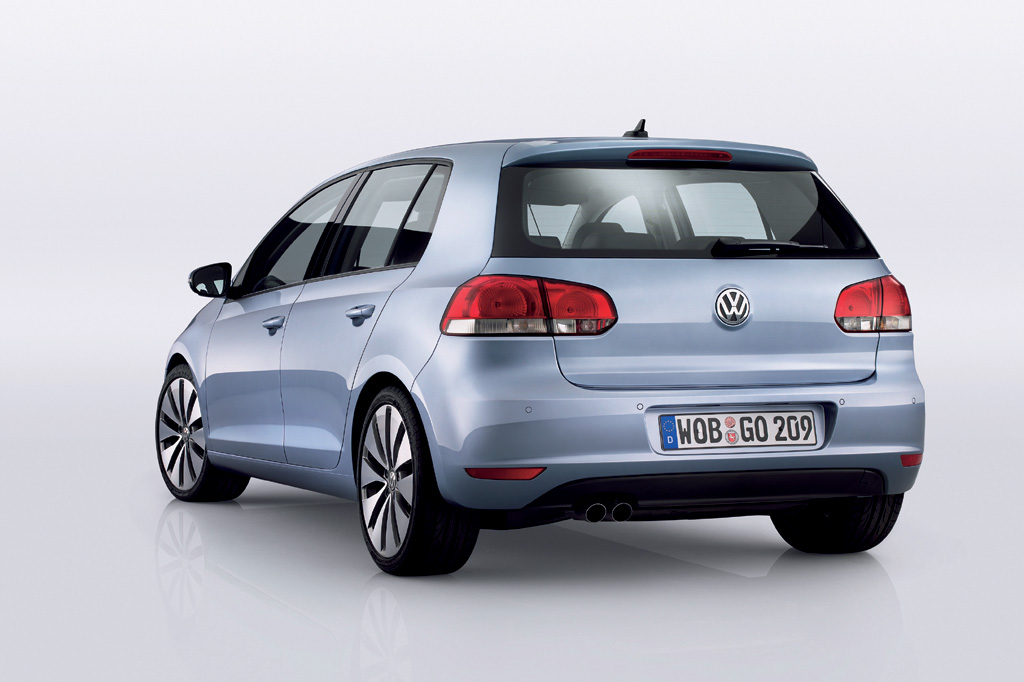 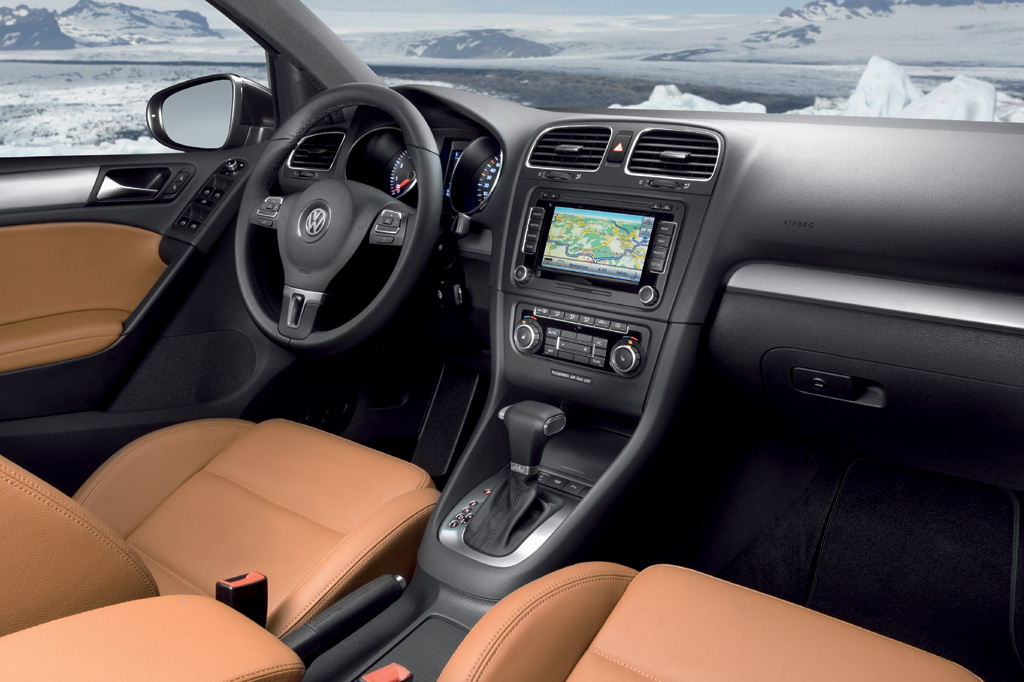 Jetta’s hatchback sibling–the Golf–injects a fun-to-drive, refined, and fairly roomy dose of sportiness into the compact-car class. The TDI’s spunky diesel engine, along with a sport suspension, raises the fun factor but also keeps things frugal with its stellar fuel-economy figures. Watch out for your bottom line, however. Even secondhand, the TDI’s price premium over gasoline-powered 2.5 models would take a while to recoup.

For 2010, the Volkswagen Golf replaced the Rabbit as this German automaker’s compact hatchback. Like the Rabbit, Golf came in two- and four-door body styles. Each was offered in 2.5 and diesel-powered TDI trim levels. A 170-horsepower 2.5-liter five-cylinder engine was standard on 2.5 models. TDI versions had a 140-horsepower 2.0-liter turbodiesel four-cylinder engine. A five-speed manual transmission was standard on the 2.5 two-door. Optional on that model and standard on the four-door 2.5 was a six-speed automatic. TDI versions came with a sport suspension and had either a six-speed manual or six-speed dual-clutch automated manual that behaves much like an automatic. Standard safety features included all-disc antilock braking, traction control, an antiskid system, curtain-side airbags, and front-side airbags. Four-door models could add rear-side airbags as an option. A tilt and telescopic steering wheel was standard. A sunroof, heated front seats, and a wireless cell-phone link were optional on all models. An uplevel audio system, xenon headlights, and a navigation system were TDI-exclusive options. Golf competitors included the Hyundai Elantra Touring, Mazda 3, Nissan Versa and Cube, Scion xB, and Chevrolet HHR.

Any 2.5 model has enough pep for any situation, despite the non-linear nature of its throttle response. Its conventional six-speed automatic transmission is smooth and prompt-shifting. After a brief pause, the TDI model pulls away strongly and makes short work of highway passing maneuvers; turbo lag is otherwise minimal. The manual transmission has short throws and an easy-to-modulate clutch. TDI’s six-speed automated-manual transmission can be finicky around town, but it smooths out at higher speeds and delivers power promptly. Golf R has explosive power, but it’s tricky to modulate and can be a long time in coming at low rpm in the higher gears due to turbo lag.

The 2.5 and TDI feel comfortable and composed at all speeds, absorbing pavement imperfections well. TDI’s 17-inch wheels and sport suspension firm up the ride and transmit a bit more road jiggle into the cabin. The Golf R can feel jiggly and it thumps over bumps, but it’s never harsh.

All Golf models are sporty and agile, with little body lean; TDI’s sport suspension delivers even more nimble cornering ability, and the Golf R is downright sporty. Braking is smooth and strong in general, though one test car suffered from touchy pedal action in wet conditions.

The 2.5 model’s 5-cylinder puts up a fuss when pushed but is reasonably quiet otherwise. The Golf R’s turbo exhibits some full-throttle exhaust roar, but cruises fairly quietly. Only a bit of the TDI’s diesel clatter is noticeable at idle; it quickly fades at higher speeds. On all models, some wind and road noise make it into the cabin, but neither at an intrusive level.

On models without navigation, a simple array of very large audio and climate buttons makes controlling those functions easy. The TDI’s revised navigation system mimics that of the Volkswagen Jetta. It’s pretty simple to program, thanks to the combination of a touchscreen and BMW iDrive-style rotary knob. The system absorbs some audio controls, complicating what should be simple adjustments. Interiors have been available only in black, but it strikes a sporty, rather than austere, note. Brushed-metallic accents and chrome trim dot the cabin and impart a much-needed bit of flash. Most surfaces are high-quality-feeling soft-touch plastics.

Front-seat headroom and legroom are plentiful. The standard tilt and telescopic steering wheel is a driver-comfort plus. Seats are nicely bolstered and all-day comfortable. Their gray and black check pattern is a nice touch and complements the cabin well. Visibility is generally good, but the view to the corners is compromised a bit by slightly thick rear roof pillars. Note that 2.5 cars do not have a center armrest, which is a pretty glaring omission.

Average-height passengers will have enough headroom and legroom, but squeezing three across in the backseat won’t be comfortable; two have plenty of space. Entry and exit are easy in the four-door hatchback. Surprisingly, it’s the same with the two-door; access is not nearly as awkward as you might expect.

Small-items storage spaces include a large glovebox and decent-sized door pockets. Instead of a center console, however, there’s a small bin for holding a cell phone or something similarly sized. The rear seatbacks fold to increase cargo space, but they don’t lie completely flat. A fold-flat front-passenger seat is a welcome feature for loading long items.