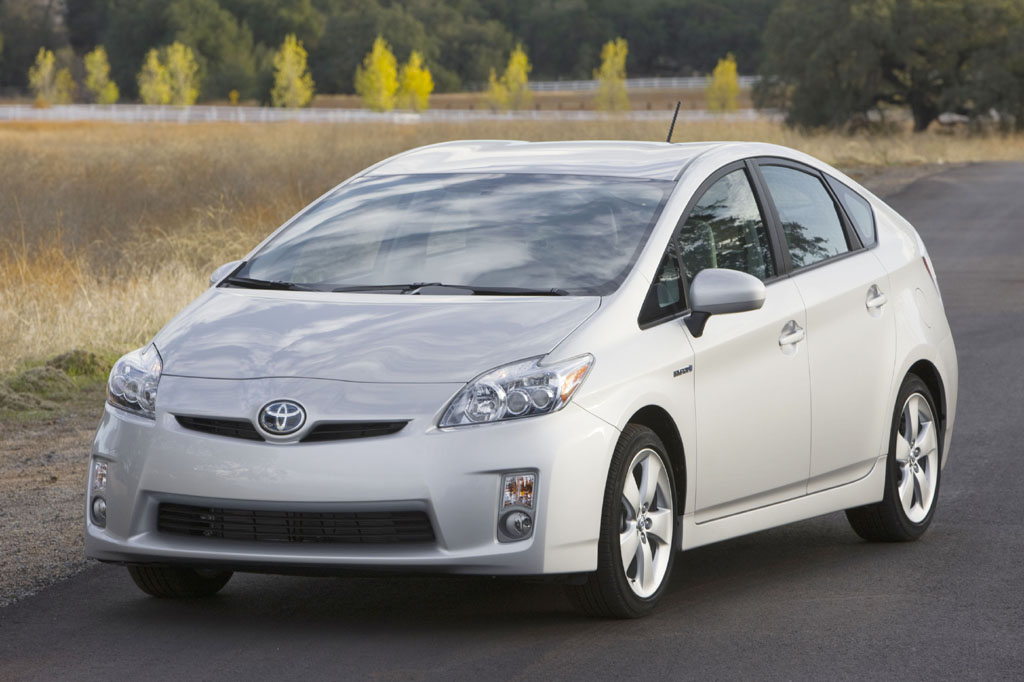 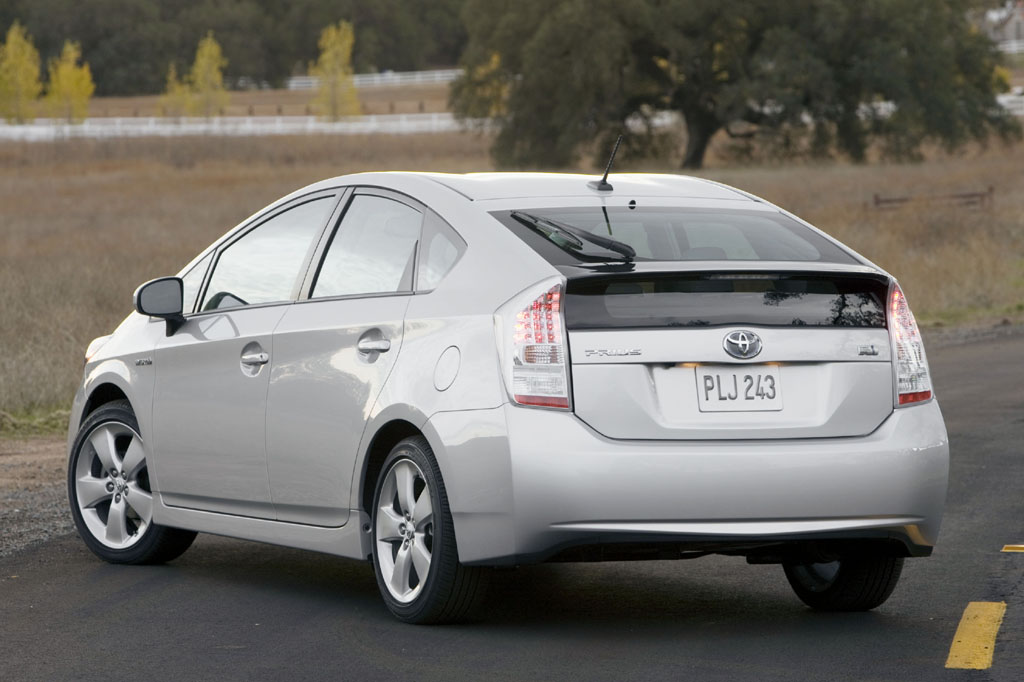 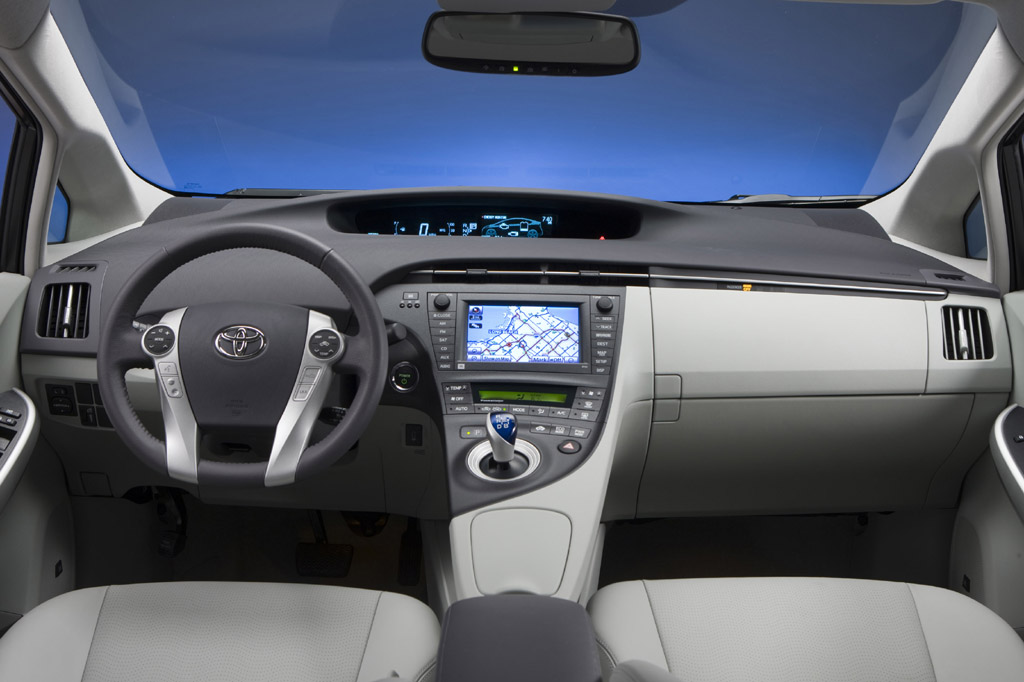 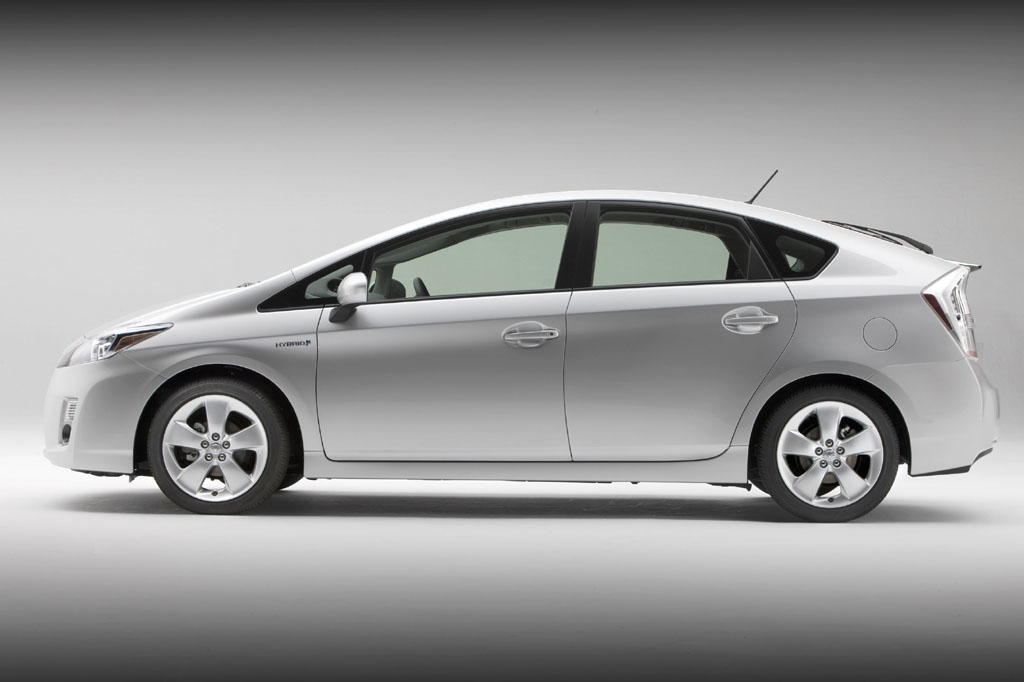 What’s most surprising about the Prius is what a fine midsize car it would be even if it didn’t achieve such terrific fuel economy. When new, Prius won Consumer Guide Best Buy awards each year from 2010 through 2014. Its only real drawbacks are minor powertrain idiosyncrasies, slightly compromised rear visibility, and down-market interior materials. None of these negatives should keep you from putting this impressive Toyota on your shopping list.

The midsize Toyota Prius was redesigned for 2010, getting freshened styling, more power, higher EPA fuel-economy figures, and a host of newly standard and optional features. First introduced a decade earlier in its initial form, this gas/electric hybrid was a five-passenger, four-door hatchback that teamed a four-cylinder engine with a battery-powered electric motor and a continuously variable transmission (CVT), which behaved much like an automatic. Toyota’s hybrid system allowed Prius to run on one or both of its power sources to balance acceleration and fuel economy. No plug-in charging is ever required. Five models were available, called I, II, III, IV, and V. Note that the Prius I was available for fleet customers only. Standard safety features included antilock braking, traction control, an antiskid system, curtain-side airbags, front-side airbags, and a driver’s knee airbag. The V model had LED headlights, foglights, and 17-inch alloy wheels (versus the 15s on other models). Newly available features included an adjustable-height driver seat, heated front seats, a telescopic steering column, and Toyota’s Safety Connect assistance system. Also newly offered were some high-end features usually found only on vehicles sold by Toyota’s Lexus division, including adaptive cruise control, Lane Keep Assist with lane-departure warning, and Intelligent Parking Assist that provided hands-free parallel parking. Other new options included a solar roof panel that could power a ventilating fan when the car was parked, and electric air conditioning that could be turned on for up to three minutes to cool down the interior before getting in. Prius competed against the new Honda Insight, Ford Fusion Hybrid, and Chevrolet Malibu Hybrid as well as diesel-engine Volkswagens.

In the Prius, a 1.8-liter gasoline engine worked with an electric motor and battery pack to produce 134 total horsepower. A continuously variable transmission (CVT) was standard. The same powertrain was used on the Plug-In. The Plug-In added a larger battery that allowed about 11 miles of electric-only range, after which it ran just like any other hybrid.

Initial full-throttle acceleration from a stop is mediocre at best, but the pace picks up quickly and increases steadily thereafter. Toyota claimed that the 0-60 time dropped from 10.5 seconds to 9.8 after the 2010 redesign, and the difference can be felt. What’s most impressive, however, is mid-speed throttle response. While it’s not particularly strong, it is nearly instantaneous, as the electric motor and CVT negate the need for a conventional downshift. Pressing the PWR (Power) button on the console quickens throttle action for an even sportier feel. Pressing the EV (Electric Vehicle) button allows the car to run in electric-only mode up to 25 mph for about a mile with a fully charged battery. Transitions when the gas engine kicks on and off during driving produce less shudder than before, but it can still be felt.

Fuel economy is essentially unbeatable. In Consumer Guide testing, we have averaged 43.3 mpg in winter driving and 49.6 to 51.9 mpg during other seasons. The Plug-In model can go about 11 miles on just electric power before the gas engine has to kick in, but it will also kick in under anything other than mild acceleration. In a winter test, a Plug-In returned 47.0 mpg. Prius uses regular-grade gas.

Models with 15-inch tires absorb most bumps with ease, but they suffer from wallow over rough patches and pavement swells. The V model with its 17-inch tires rides more firmly, with occasional harshness.

Road and wind noise are modest for the class, and the V model’s 17-inch tires produce a bit more noise at highway speeds. The gas engine sounds gruff as it revs, especially at full throttle.

The control layout remains unconventional, but it’s an improvement over the previous-generation Prius, particularly when equipped with a navigation system. As before, the driver faces nothing but blank dashboard, with the digital speedometer residing in a central panel mounted high against the windshield, just out of line-of-sight. Without navigation, audio and climate controls are conventionally positioned on the dash, and a few are just out of easy reach. The navigation system still absorbs most audio controls, but they become “virtual pushbuttons” on the screen, no longer incorporating climate controls. Several of the “gee whiz” hybrid-oriented electronic readouts are now more subtle and display next to the speedometer, up near the windshield, making them less distracting. The shift lever remains an electronic flipper, but it’s now mounted on a raised center console instead of the dash. Hard plastic dominates the interior. Two-tone panels and other trim pieces give it a look that some testers have complained makes the car look built to a price. One test model suffered from a few minor interior creaks.

Most adults will enjoy plenty of headroom and legroom up front, though some lanky ones may find their right knee hitting the raised center console. Shorter drivers in particular may appreciate the height-adjustable seat and telescopic steering wheel. Entry and exit are very easy. Standard cloth seats are softer than most, and some occupants may feel they lack support, but the leather seats on IV and V models are firmer. Visibility is hindered to the rear corners by thick pillars, and the rear window is still split by a horizontal bar that blocks the view straight aft. Some drivers might be highly annoyed by the backup alarm that chimes inside the car when in reverse, but Toyota says a dealer can turn it off.

Back-seat legroom and foot space are ample. Very tall passengers may yearn for more headroom, though most should find it in plentiful supply. The seat isn’t wide enough for three adults, but if a center passenger will fit, they’ll find plenty of foot space thanks to a flat floor. Entry and exit are easy through large doors.

Prius offers hatchback versatility with 60/40 split-folding rear seatbacks, but the sloped tail and high floor preclude toting tall items with the hatch closed. A large underfloor bin at the rear of the cargo area can hold the roll-up cargo cover when it’s removed–a handy touch. Cabin storage is plentiful, and includes a large bin under the raised center console, upper and lower gloveboxes, and a two-tiered console box. Doors have no map pockets, but there are bottle holders, along with two console cupholders.