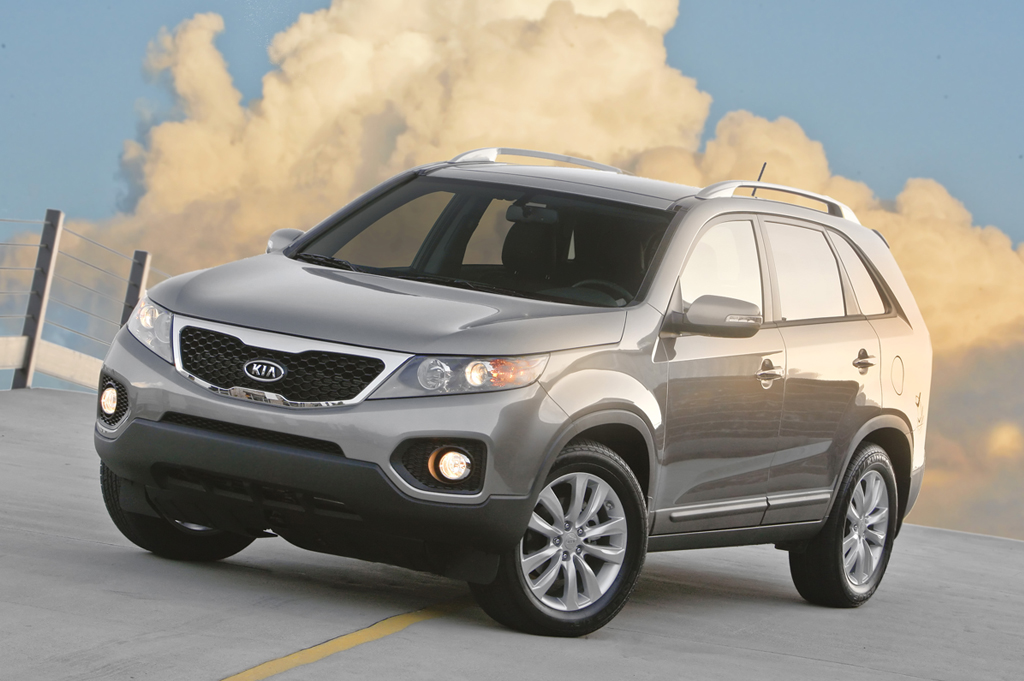 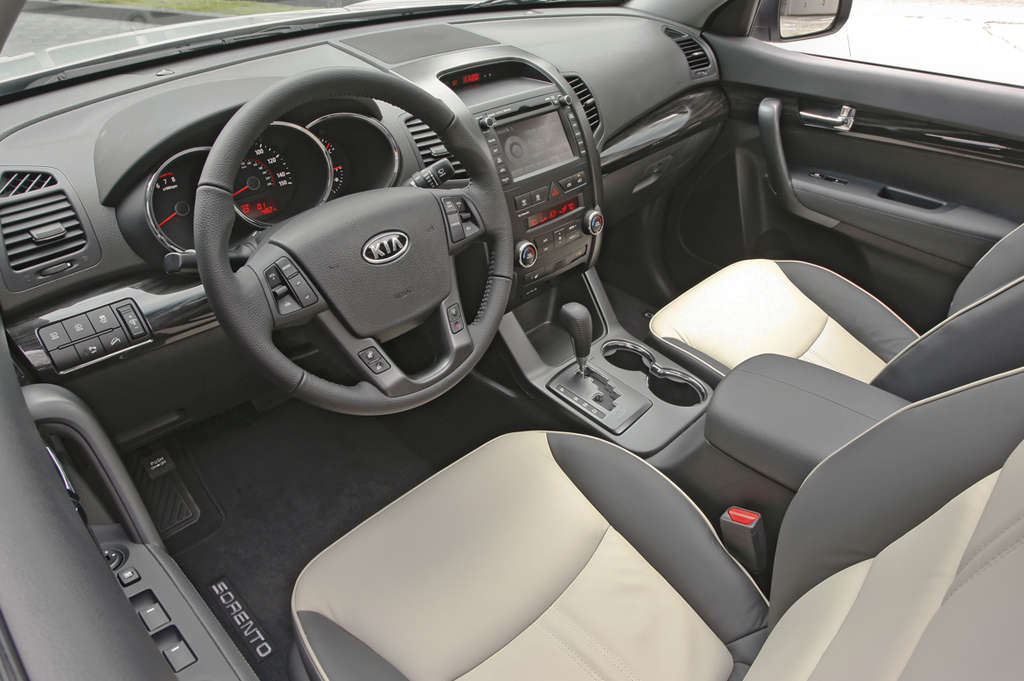 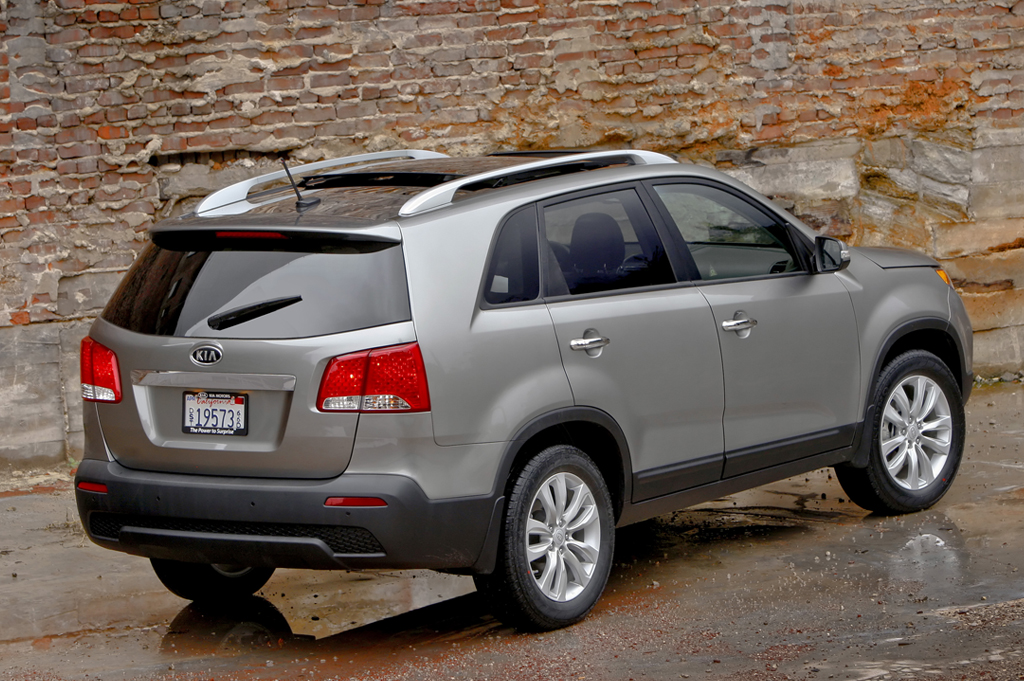 Sorento’s transformation to a crossover SUV from a traditional truck-type design works to its benefit. In this form, Sorento rides and handles well, aided by tidy-for-the-class exterior dimensions. Many available upscale features add to its Best Buy 2011-13) appeal. Rear-seat room and comfort are a bit disappointing, and the available third row is merely a token gesture. Fortunately, the more potent four-cylinder engine in the latest Sorento is no slouch. If it’s enough for you, compared to the V6, a modestly equipped five-passenger Sorento may represent the best value in this lineup. Then again, better-equipped models may have appealing prices, too, on the used-vehicle market.

In addition to freshened styling and new features, the redesigned 2011 Kia Sorento adopted new engines and a different body structure. Kia’s midsize crossover SUV shared elements of its basic design with the Santa Fe produced by Kia’s corporate parent, Hyundai. The 2003-2009 Sorento had been a five-passenger SUV that used traditional truck-type construction. Now capable of seating up to seven, the new Sorento used unibody construction. Trim levels for the redone 2011 model included entry-level LX, uplevel EX, and sporty SX. The LX and EX models held a standard 175-horsepower, 2.4-liter four-cylinder engine. Available on those and standard on the SX was a 276-horsepower, 3.5-liter V6. All Sorentos could have either front-wheel drive or all-wheel drive. A six-speed automatic was the sole transmission. The Base trim level and six-speed manual transmission were discontinued. Maximum towing capacity was 3,500 pounds.

Standard safety features included all-disc antilock braking, traction control, an antiskid system, curtain side airbags that covered the first two seating rows, and front side airbags. Hill ascent/descent control also was standard. All four-cylinder models had standard five-passenger seating. Optional on four-cylinder models and standard on V6 versions was a third-row bench seat that increased capacity to seven. A Convenience Package for the LX included rear-obstacle detection, a rearview camera, and fog lights. A Premium Package for the EX included leather upholstery, heated front seats, rearview camera, and on V6 models, a panoramic sunroof. A Limited Package for the EX included a navigation system, uplevel audio system, and chrome wheels. DVD entertainment was optional on the EX V6, and versions so-equipped cannot be ordered with a sunroof. SX models had specific trim and a sport suspension. Many features that were optional on the EX were standard on the SX, including leather, heated front seats, navigation, and the rearview camera. Sorento’s main rivals included the Chevrolet Equinox, Honda Pilot, Mazda CX-9, and Toyota Highlander.

In 2011 LX and EX models, the standard 2.4-liter four-cylinder engine produced 175 horsepower. Standard in the SX and optional for others was a 276-horsepower, 3.5-liter V6. Sorentos could have front-drive or all-wheel drive. A six-speed automatic was the sole transmission. For 2012, the new Base model got the 175-horsepower, 2.4-liter engine, but a new 191-horsepower GDI (Gasoline Direct Injection) version was standard in the LX GDI and EX GDI. A six-speed manual gearbox was standard on the new two-wheel-drive Base model; others used the six-speed automatic.

Models with the 175-hp four-cylinder engine are not what you’d call fast; they deliver merely adequate passing punch. In fact, testers have complained of needing a heavy throttle foot in order to summon power reserves. Naturally, the V6 is stronger in all situations, but even that doesn’t feel quite as potent as its 276-horsepower rating would suggest. With either engine, the transmission is smooth and responsive.

Fuel economy hasn’t been a strong point, but it’s a bit above SUV-typical. In Consumer Guide testing, a front-drive four-cylinder model averaged 22.3 mpg. Test AWD V6 models have averaged 16.9 to 21.4 mpg. EPA estimates for the GDI engine introduced for 2012 were better: 21-mpg city/28-mpg highway with AWD, or a frugal 22/32 mpg with 2WD. Sorentos use regular-grade gas.

The amount of interior noise is never unpleasant, but wind and road noise are noticeable. Neither the 175-horsepower four-cylinder nor the V6 engine sounds especially refined during acceleration, but sounds fade away at cruise.

Gauges are set back into the dashboard but are easy to read. EX models have dual-zone automatic climate control that’s simple to use. If installed, the available navigation system is similarly easy to operate and program. It provides a nice touchscreen interface for controlling digital-music players connected to the standard USB port. Within the interior, nothing surprises or disappoints. Most surfaces are firm to the touch but appear to be high quality. One test model suffered from a couple of interior rattles and a malfunctioning navigation system.

Most adults should have sufficient front-seat headroom and legroom, though the optional panoramic sunroof markedly reduces head clearance. Tall shoppers will want to skip that feature. Even though the DVD player is on the ceiling, it doesn’t block rear visibility as much as similarly positioned systems in rival SUVs and minivans. Overall visibility is generally good, but thick rear roof pillars mean drivers should triple-check their blind spots before attempting lane changes. Optional leather seats are quite firm — maybe too firm for some.

The second row has no excess of legroom, knee space, or under-seat foot space, but headroom is fine. As in front, the available leather upholstery is quite firm. With a third-row seat installed, Sorento’s second row does not slide fore/aft. The split-bench seatbacks fold, but only the passenger-side seat flips forward to allow access to the third row, and that’s only possible if the front seat is moved well forward. Even then, access to the third row requires contortions, and it’s sized for kids only, who probably won’t be comfortable back there for anything but short trips.

As for cargo space, Sorento holds its own against similarly sized crossovers. There’s plenty of space behind the second-row seat, which folds nearly flat to further increase capacity. The third-row seat folds flush with the cargo floor. All have under-floor storage. Space is much greater on models without third-row seating. The deep center console is nice, but cabin storage is unremarkable otherwise. The space beneath the climate-control stack awkwardly accommodates MP3 players when their cords are connected to the USB or auxiliary stereo input.