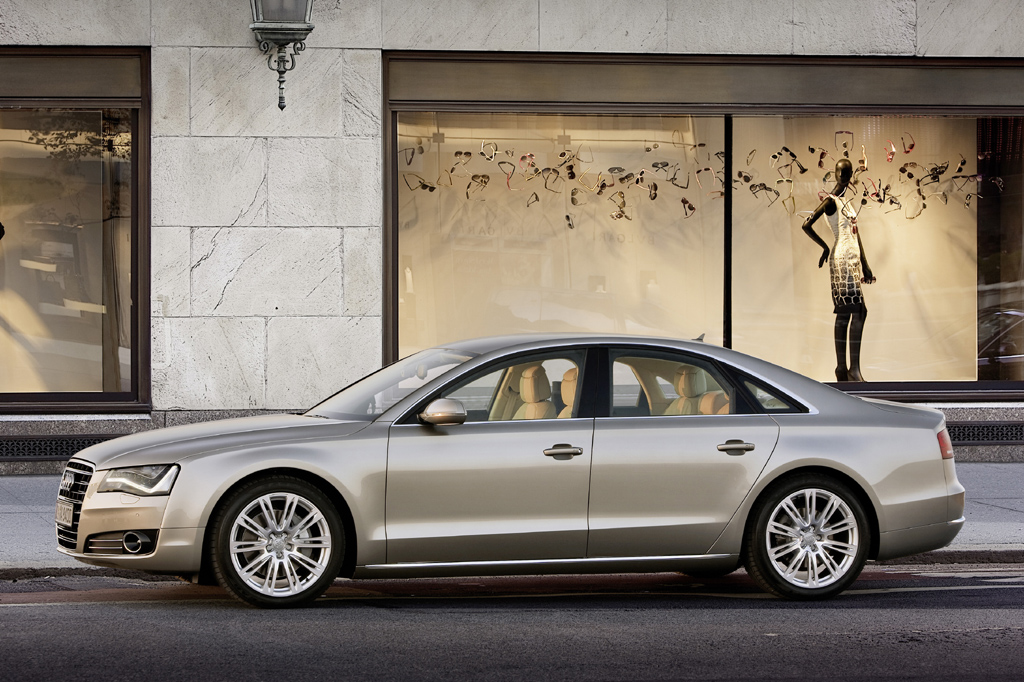 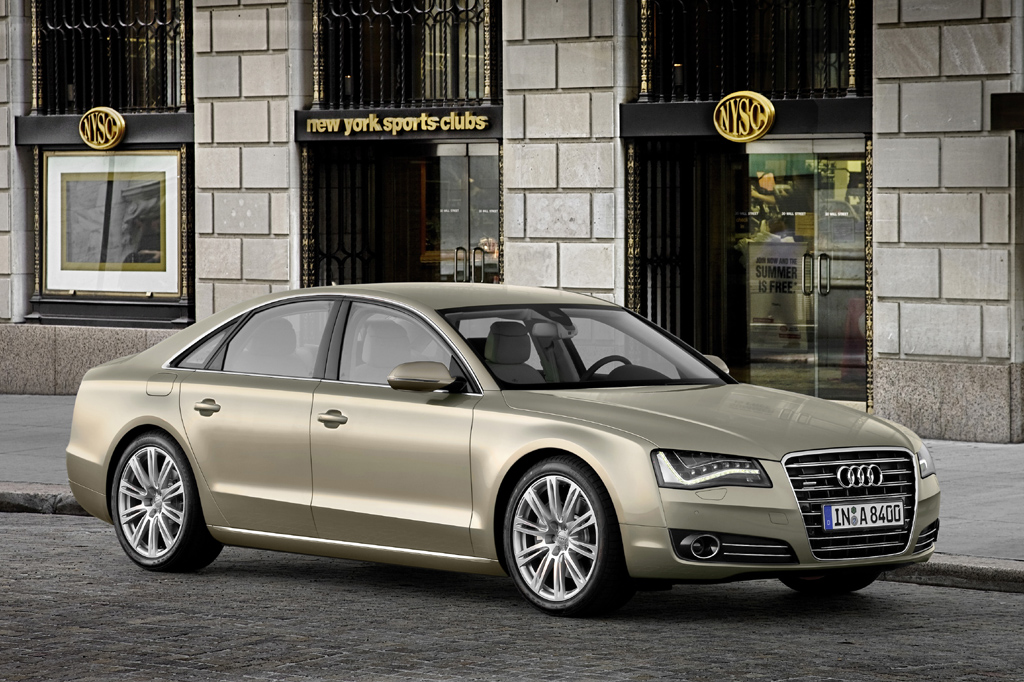 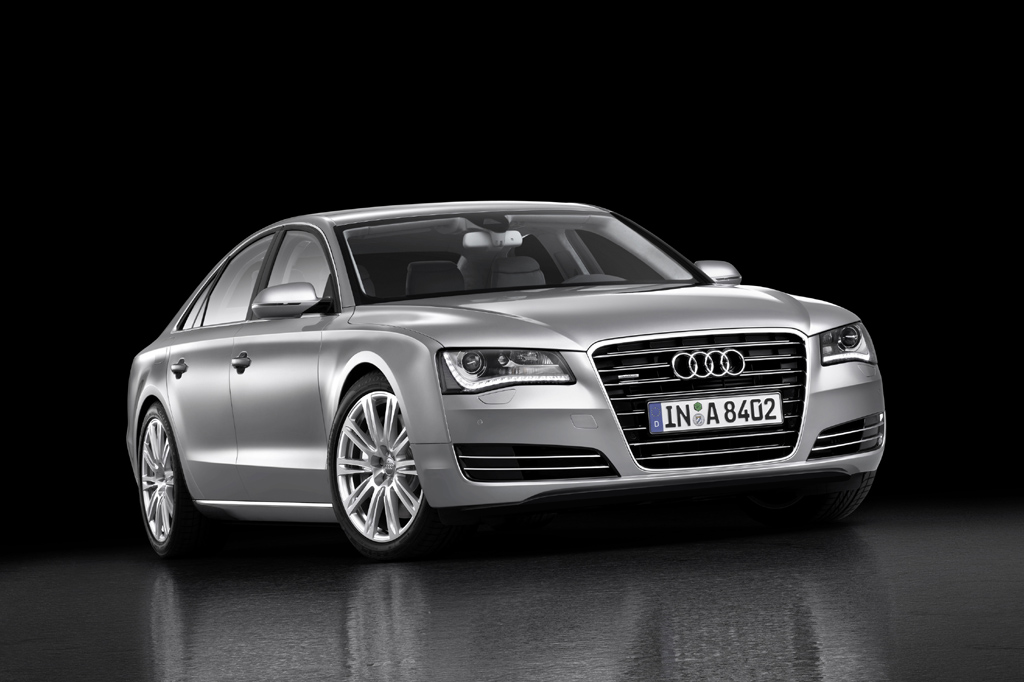 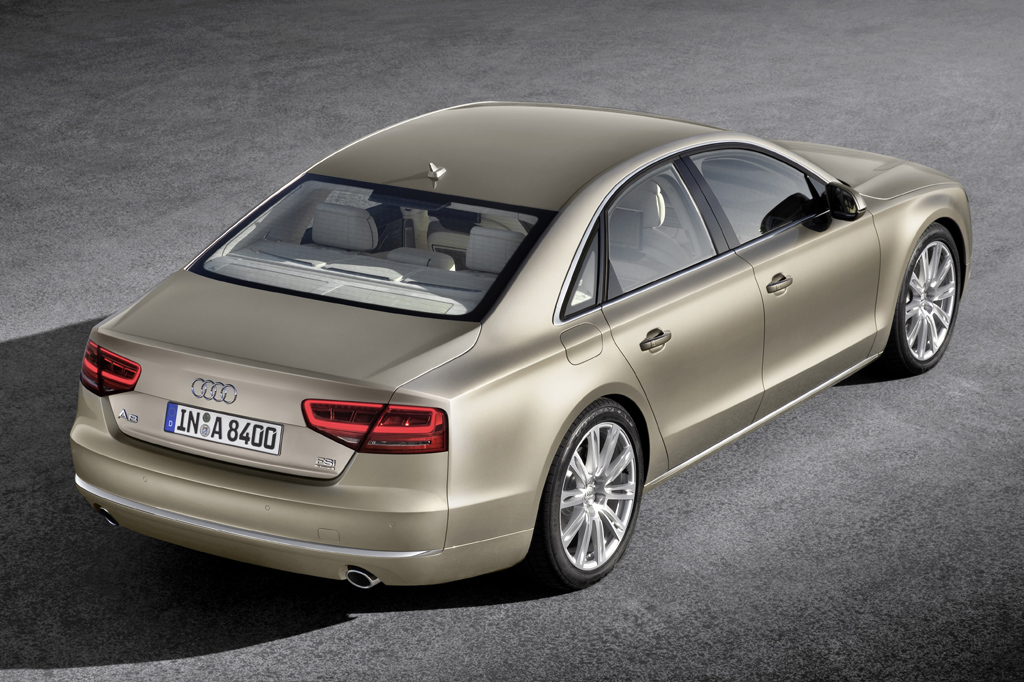 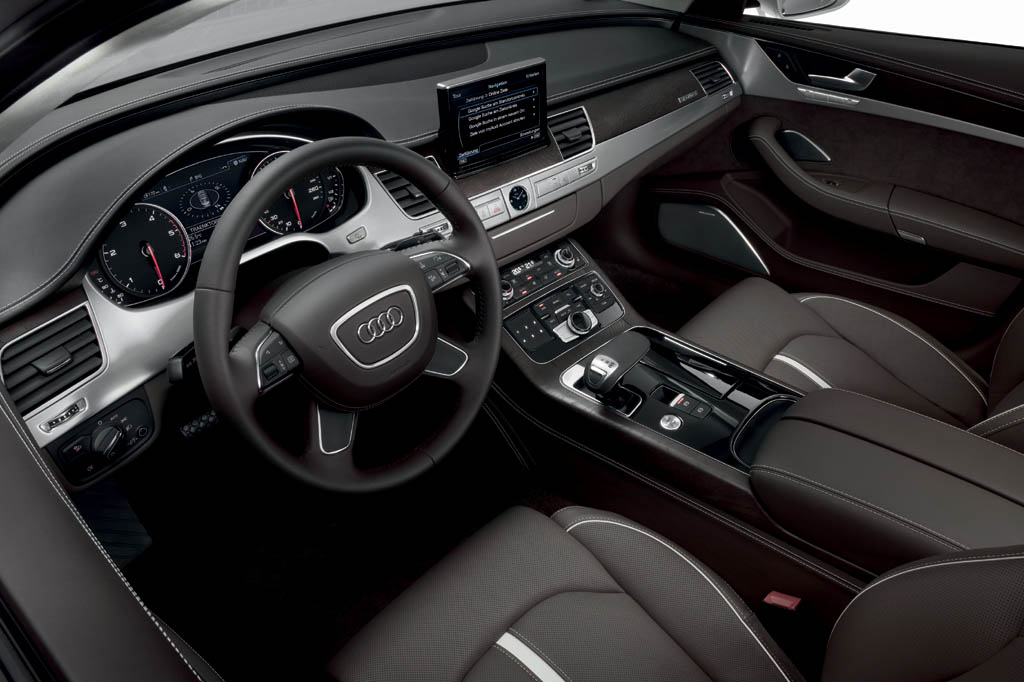 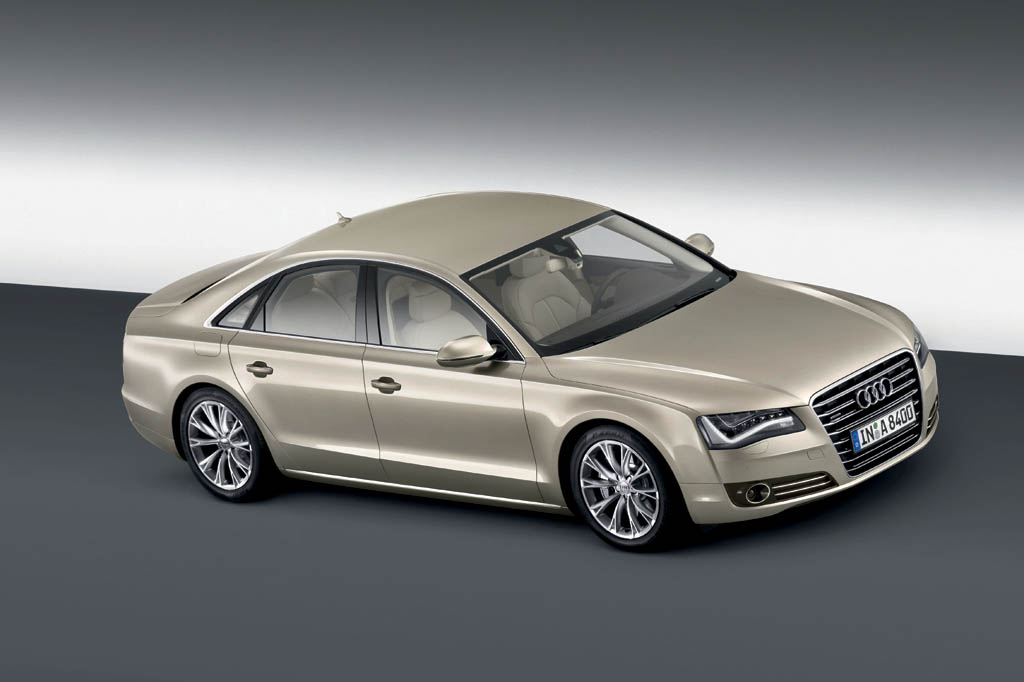 Rival flagship sedans may still beat the A8 for brand cachet, residual-value strength and customer-satisfaction scores. Audi counters such deficits with standard all-wheel drive, unique styling, and (when new) lower base prices with comparable equipment. Audi’s subtle yet thorough 2011 makeover only added to the appeal of a terrific premium-large sedan that merits a close look and serious consideration.

Redesigned for 2011, Audi’s flagship full-size sedan gained freshened styling for its regular A8 and extended-wheelbase A8 L models. Dimensions increased modestly: length, width and height, along with weight. Volkswagen owned this Audi brand, and the two German companies had connections dating back many years. Both models featured Audi’s quattro all-wheel drive, along with a new 8-speed automatic transmission that used steering-wheel shift paddles. A newly revised 4.2-liter V8 engine added 12 horsepower, for a total of 372. All A8 models included an adaptive air-spring suspension. Also standard was a navigation/infotainment system with Audi’s MMI (Multi Media Interface) controller, which now added a console-mounted touchpad that could be used to input handwritten commands for certain functions.

The S8 high-performance version of Audi’s A8 sedan returned to the U.S. after a two-year furlough in 2013. The S8 is based on the A8, but aims more at driving enthusiasts than luxury lovers. Because of its specialized nature, the S8 is the second costliest model in the A8 family.

S8 competed in the small but hotly contested sports-luxury subset of the premium-large-car class. Its only rivals were the Alpina B7 variant of the BMW 7-Series; the Jaguar XJ Supersports; and the Mercedes-Benz S63 AMG, based on that brand’s big S-Class sedan.

Those cars formed a very exclusive group, with each model’s yearly U.S. sales typically numbering in the hundreds, not thousands. The S8 has usually finished last in the race, much as the A8 line as whole is still outsold by its British and other German rivals.

Audi claimed the standard-length A8 accelerated 0-60 mph in a class-competitive 5.7 seconds. Our test car felt that quick–abetted by AWD traction–and had strong mid-range passing power. The eight-speed automatic transmission is velvety smooth and responsive. Hesitation to downshift for passing may occur, but the steering-wheel paddles can be used to compensate in Drive as well as in manual-shift Sport mode. No Audi S8 models were made available for Consumer Guide evaluation.

In Consumer Guide testing, we averaged 21.3 mpg in a roughly 50/50 city/freeway driving mix. That aligned well with the EPA’s 17/27/21-mpg city/highway/combined estimates. For 2012, the estimate rose to 18/28 mpg (city/highway). Audi recommends premium-grade gas for best performance, but regular can be used as well (except with the W12 engine).

Ride quality is comfortably controlled and absorbent on most surfaces, regardless of the Drive Select mode and despite optional 20-inch wheels. The Dynamic setting gives a noticeably firmer feel and lets sharp bumps register more clearly, though without jolting. Comfort mode furnishes a plusher ride, but accompanied by a hint of floatiness over large humps and dips. Automatic mode splits these differences. The A8 continues to feature weight-saving aluminum space-frame construction, which is designed to benefit performance, fuel economy and handling without compromising rigidity. Our test car seemed very solid overall.

Audi’s A8 remains surprisingly agile for such a large, heavy sedan, offering firm and accurate steering, modest cornering lean, and secure AWD grip. This sedan feels most athletic in Drive Select’s Dynamic mode, but at the expense of noticeably higher steering effort, which might not please some drivers. Strong brakes deliver smooth, quick, level stops from any speed, but our test car suffered from numb, slightly ragged pedal action.

Like prior models, the latest A8 is whisper-quiet except at full throttle, when the V8 rises only to a muted, rich-sounding growl. The available 20-inch high-performance tires drone on coarse pavement, but are far from loud. Wind noise is virtually absent even during rapid highway cruising.

Although the A8’s numerous controls are as daunting as those of any feature-laden luxury car, they prove logical and convenient after a little study. Conventional switches handle basic audio and all climate functions. Other adjustments require using Audi’s MMI system, which includes a main control knob, flanking buttons, and retractable dashboard screen. The new-style shift lever–shaped like a yacht’s hand-throttle, Audi advises–had a stiff action that often resulted in overshooting the desired position. As expected of Audis, the A8 impresses for its top-notch fit/finish, interior materials, and detail workmanship–just as it should at this price level. Discreet ambient light strips along the interior roof rails and around the front roof console are a classy nighttime touch. Our test car’s vehicle-information display disappeared from the gauge cluster one afternoon, but it returned the next morning and gave no further trouble. Such glitches are hardly unknown in electronically complex premium cars, but we were still dismayed by that occurrence.

Redesigning of the A8 yielded a slightly larger cabin with something close to stretch-out space in front, complemented by good headroom despite the standard tilt/slide sunroof. The driving position is easily tailored to suit via a power tilt/telescopic steering wheel and ample seat-adjustment ranges. The seats themselves are well-shaped and supportive. Side bolsters power in and out on both the cushion and backrest. Available 22-way multi-contour seats include five different massage functions that seem effective; but if you find an A8 that’s so-equipped, try before you buy. Settings are adjusted via the dashboard screen and rotary knobs on the outboard seat bases. The latter setup is tricky to operate by feel, even with practice. Visibility ranks as just OK to the right-rear and dead-astern, so maneuvering this large car in tight spots demands caution. Unfortunately, that obstacle detection and a rearview camera have been available only in the $2,350 Convenience Package. Both really should have been standard at this price level.

Backseat space isn’t limousine vast, but even larger adults won’t lack for space in any direction. Though comfortable, the rear bench seat is shaped only for two, leaving a hard, cramped middle spot that’s best left for short-hop emergencies. Entry/exit is easy, though the floor passages are fairly narrow for a car this large.

Even though the trunk has a usefully cubic shape, cargo volume is unexceptional. In addition, the aperture is too small for bulky boxes. Old-fashioned sickle-shaped trunk-lid hinges seem cheap for a car in this price class, but they’re covered and don’t intrude much. Typical of the class, the rear seats don’t fold down, and a trunk pass-through/ski sack has been an extra-cost option. Above-par interior storage includes large bins and small covered cubbies in the doors, as well as a deep center-console box beneath twin height-adjustable armrests. Media plug-in ports are concealed by a small dashboard flap above the center console, but there’s no nearby storage for a phone or music player.