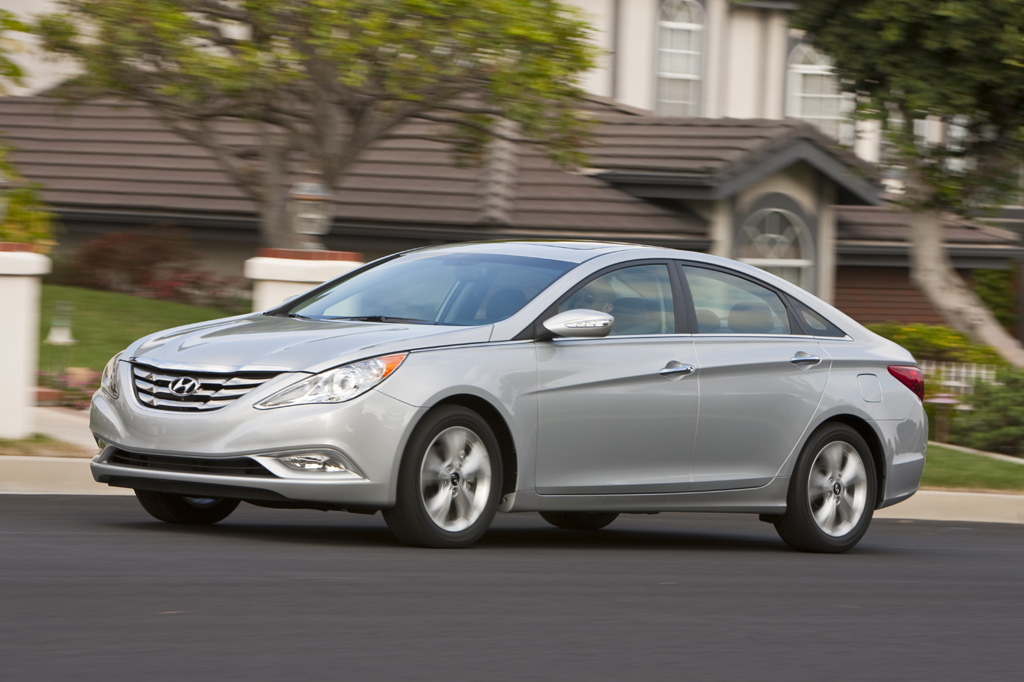 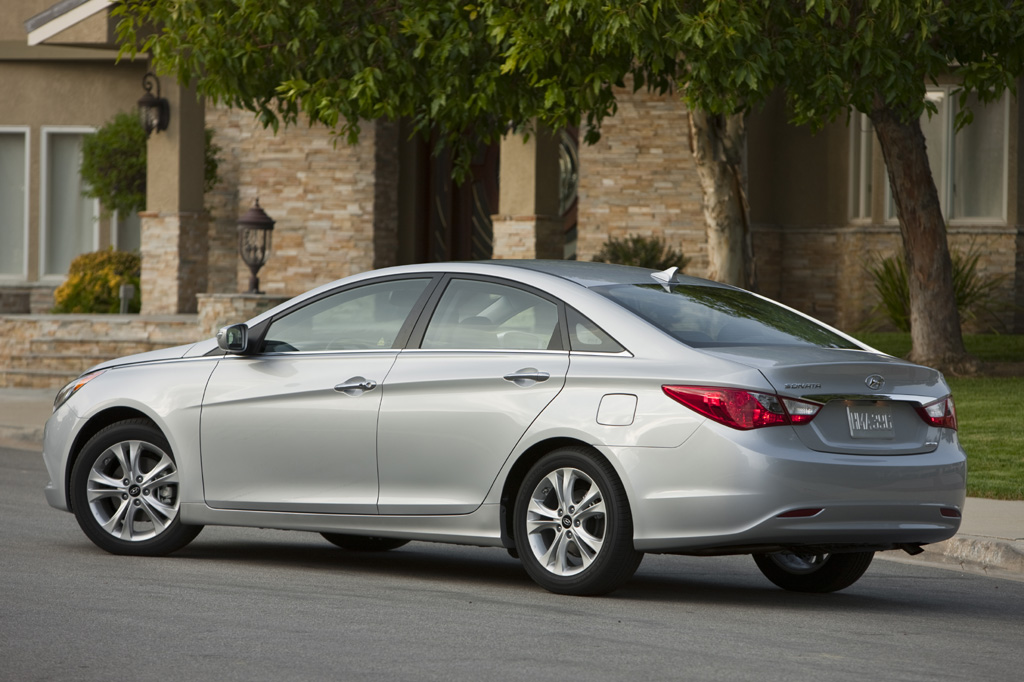 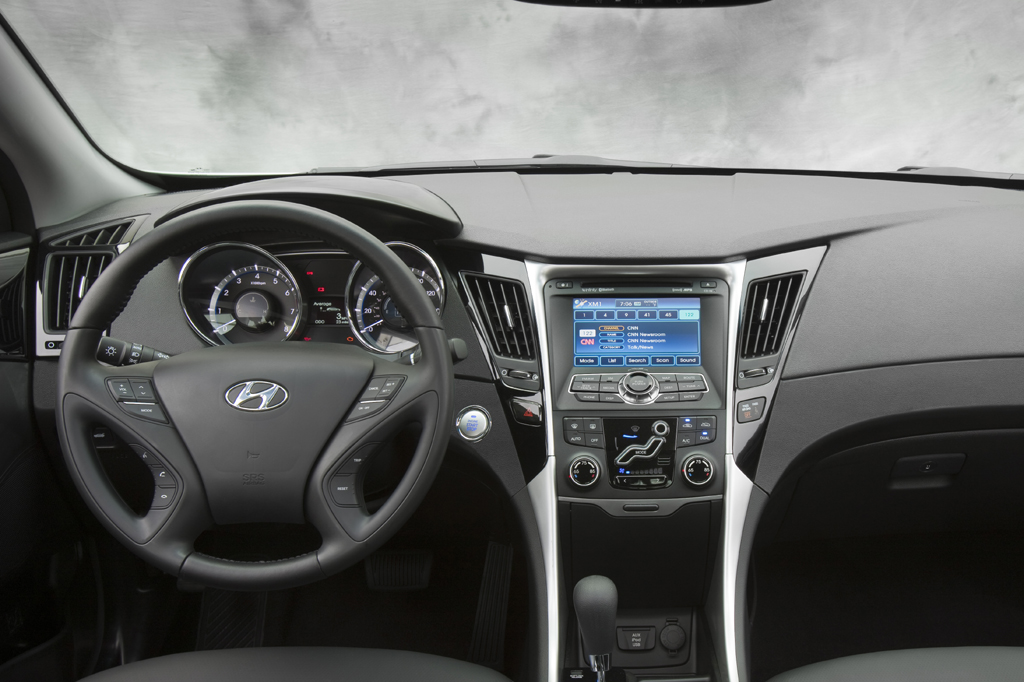 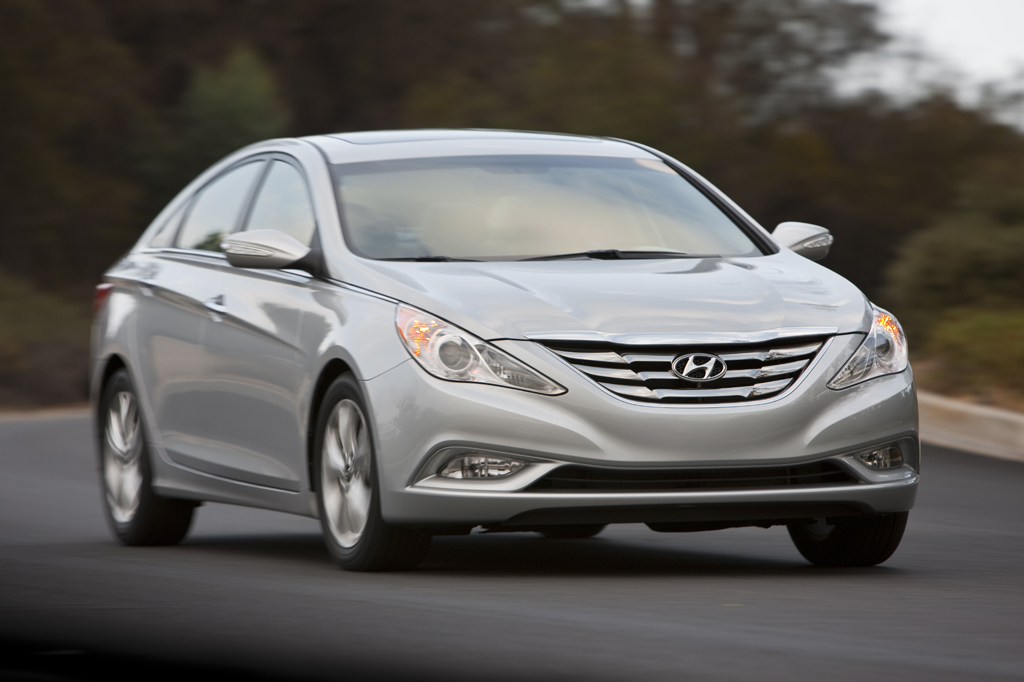 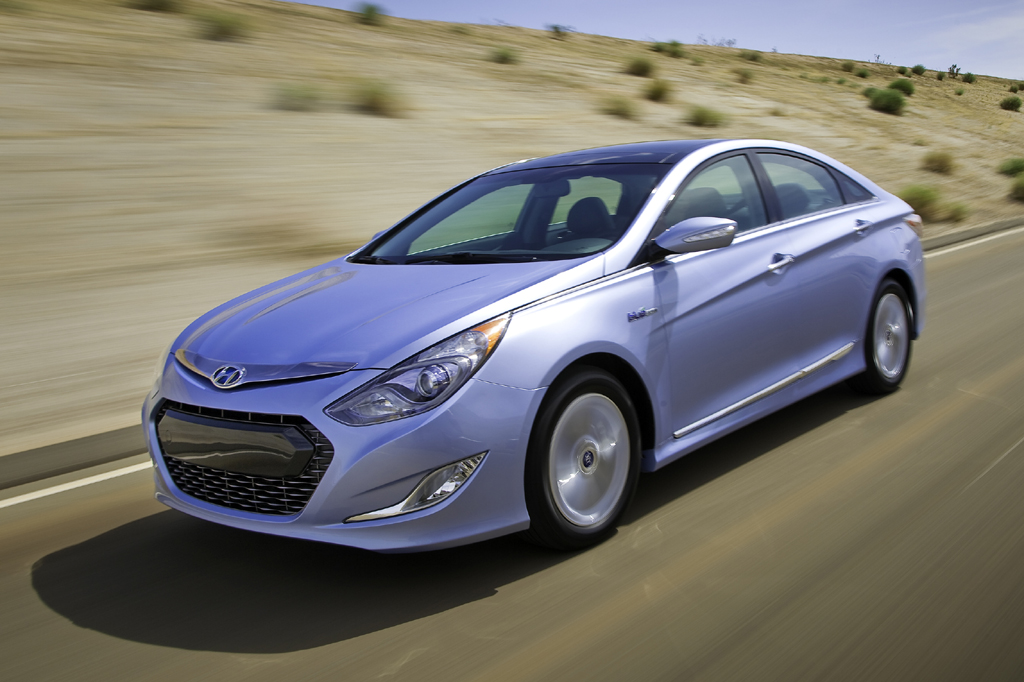 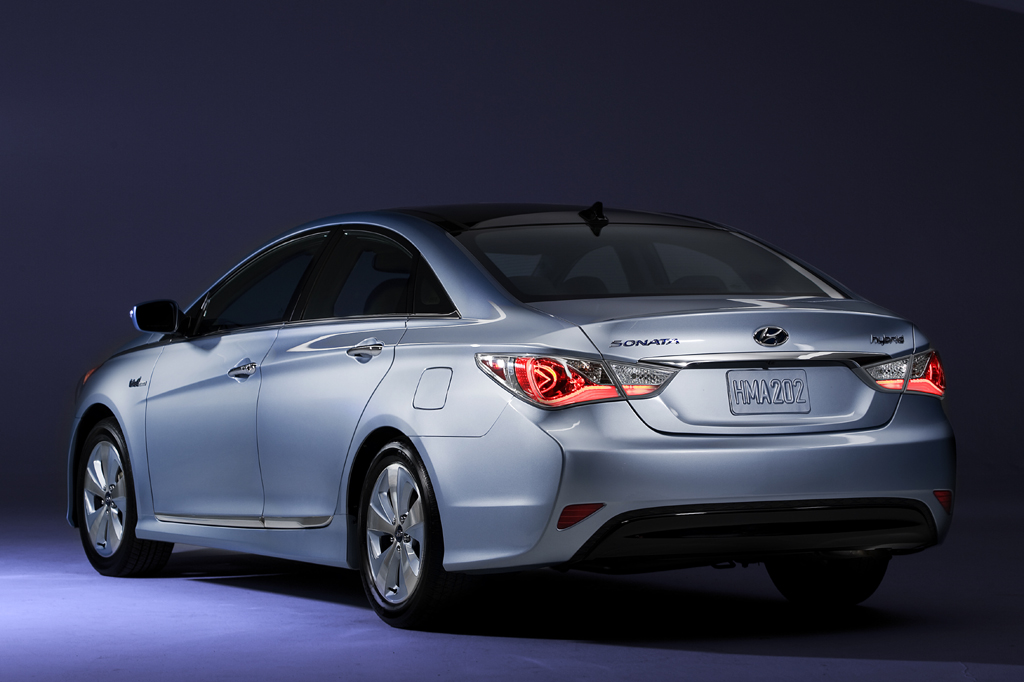 Redesigning for 2011 put Hyundai’s Sonata at the forefront of the crowded midsize-sedan segment. All Sonatas, base models included, offered an outstanding features-per-dollar ratio, which is likely to be maintained on the used-car market. The turbocharged 2.0T engine provides V6-level acceleration with four-cylinder economy. The Hybrid delivers very good fuel economy, albeit at some sacrifice to drivability and refinement. While Sonata lags rivals in suspension composure, this demerit is more than offset by the entire lineup’s blend of style, interior comfort, standard and available features, and value pricing–new or used. That’s what makes Sonata a Best Buy (2011-12).

Redesigning of the Hyundai Sonata for 2011 gave it freshened styling, new engines, and new features–plus the brand’s first gas/electric hybrid model. Following a new, thrifty trend in midsize sedans, Hyundai abandoned V6 engines in favor of four-cylinder units. In its modified form, this midsize sedan was about 3 inches longer in wheelbase and 1 inch longer overall than the 2006-2010 model. The 2011 Sonata came in four trim levels: base GLS, sporty SE, luxury-themed Limited, and eco-oriented Hybrid. Standard models were powered by a new 2.4-liter four-cylinder engine, which replaced four-cylinder and V6 engines of 2.4 and 3.3 liters, respectively. GLS and Limited engines made 198 horsepower, but the SE had 200. Available on the SE and Limited was a turbocharged 274-horsepower, 2.0-liter four-cylinder engine. Sonata models so-equipped were called 2.0T. The Hybrid paired a 2.4-liter gasoline engine with an electric motor for 206 horsepower total. Hyundai’s Hybrid could run on one or both of its power sources, to balance acceleration and fuel economy. No plug-in charging was required. Standard on the GLS was a six-speed manual transmission. Optional on that model and standard on all other Sonatas, including the Hybrid, was a six-speed automatic. SE versions had a sport suspension, 18-inch wheels, and specific trim.

Standard safety features included all-disc antilock braking, traction control, an antiskid system, front side airbags, and curtain side airbags. A navigation system was optional on all models. Limiteds equipped with navigation included a rearview camera. Leather upholstery with heated front and rear seats were Limited-exclusive standard features. Hyundai’s Sonata competed against such midsize sedans as the Ford Fusion, Honda Accord, and Toyota Camry, as well as the Chevrolet Malibu, Mazda 6, Nissan Altima, and Kia Optima.

Sonatas could have either regular or turbocharged four-cylinder power. The standard 2.4-liter four-cylinder engine developed 198 horsepower (200 hp in the SE model), while in 2.0T editions, the turbo four-cylinder generated 274 horsepower. The Sonata Hybrid blended a 2.4-liter gasoline engine with a battery-powered electric motor, for total output of 209 horsepower. For 2013, the Hybrid got a more-powerful electric motor and battery pack. While total system horsepower was down to 199, torque rose from 195 to 235. All models used a six-speed automatic transmission except the GLS, which had a standard six-speed manual gearbox (automatic optional).

With the standard 2.4-liter four, the Sonata feels fine from a stop and has enough power for worry-free highway merging. Highway passing power is only adequate, however. Models with the 2.0-liter turbo don’t jump off the line, but that engine builds power quickly and linearly. Hyundai quoted a 0-60-mph acceleration time of 6.5 seconds with the turbo engine, but that seemed a bit optimistic. The automatic transmission in all models is generally smooth and responsive, though some delay in downshifting for more passing power has been observed. The manual shift gate and available steering-wheel paddles help in this area. Although the manual transmission is generally smooth in operation, vague clutch engagement can frustrate stop-and-go driving. The Hybrid delivers very good power both in around-town driving and on the highway. Transitions between electric and gas-engine power are virtually seamless, though the transmission is slow to downshift when more power is needed. Some testers have noticed annoying bogging and surging from the drivetrain in low- and moderate-speed driving.

Fuel economy scores as outstanding for the class. In Consumer Guide testing, an SE averaged 28.8 mpg in an even mix of city and highway driving. A manual-transmission GLS averaged 25.9 mpg. We averaged 22.6 mpg in a turbocharged model with slightly more city driving than highway use. A Hybrid averaged 32.9 mpg. Some EPA estimates for automatic-transmission models rose slightly in 2012. All Sonata engines use regular-grade gasoline.

Ride quality has a couple of issues. Sonata GLS, Limited, and Hybrid models demonstrate an acceptable balance of comfort and control. However, Sonatas are prone to overreacting to larger road imperfections, responding to some with undue body motion. SE models, with their sport suspension and 18-inch tires, ride more firmly than other Sonatas. They also exhibit nervousness over rough and ridged surfaces.

Test-drivers have been divided on Sonata’s handling prowess, particularly regarding the sport-themed SE. Most have deemed Sonata to be a competent and confident midsize sedan in everyday driving. Slightly more aggressive moves on twisting roads are handled with little drama. Others have declared Sonata not exceptionally agile, with numb steering that betrays the sporty feel Hyundai has been trying to impart lately. One of the tightest turning circles in this vehicle class aids close-quarters maneuvering.

Wind-noise suppression is good. The four-cylinder engine isn’t quite as refined as the best in this class, but it’s generally smooth and quiets down nicely at cruise. 2.0T models exhibit a subtle turbo whine under acceleration. The Hybrid’s gas/electric powertrain whirs and whines mildly, especially during deceleration. Tire noise on SEs is significantly louder at highway speeds than on other Sonatas.

In general, Sonata’s controls are simple to use and easy to reach. The available navigation system absorbs some audio functions, but the most basic settings are controlled with buttons on the steering wheel or the center of the dashboard. Gauges and other displays are clearly marked and easy to read. The Hybrid includes additional readouts for its gas/electric powertrain; they’re helpful, but not as handy or intuitive as the displays in competitive hybrids such as Ford’s Fusion. Overall, the cabin is attractive and assembled with care. A combination of lightly padded surfaces and hard plastics is used. Most look fine for the class, but a couple of pieces slightly miss the mark. Fabric trim has a nicely textured surface that adds visual interest. Interiors have attractive contrasting colors and metal-look trim.

Most adults should have adequate front-seat headroom and legroom. A power driver’s seat has been available on GLS and standard on other models. It provides a great range of fore/aft travel, making it easy for adults of nearly any size to find a comfortable driving position.

Backseat headroom and legroom are sufficient for 6-footers, even with the front seats pushed far back. The bench seat is hospitable, and door openings are shaped for easy entry and exit.

Trunk space is ample, but a fairly small opening and sickle-shaped hinges limit usefulness a bit. The 60/40 split rear seatbacks easily fold forward to increase cargo room, but the pass-through is on the small side. Also, the resulting load floor isn’t flat. The Hybrid has a rear-seat pass-through only; it loses 5.7 cubic feet of cargo space and folding rear seatbacks due to the hybrid battery pack. Interior small-items storage is good. A covered compartment at the base of the climate-control panel is a thoughtful touch, while the open bin forward of the shifter houses the auxiliary stereo and USB ports, plus two power outlets. Each door has a pocket and a bottle holder, and both front seatbacks contain pockets.