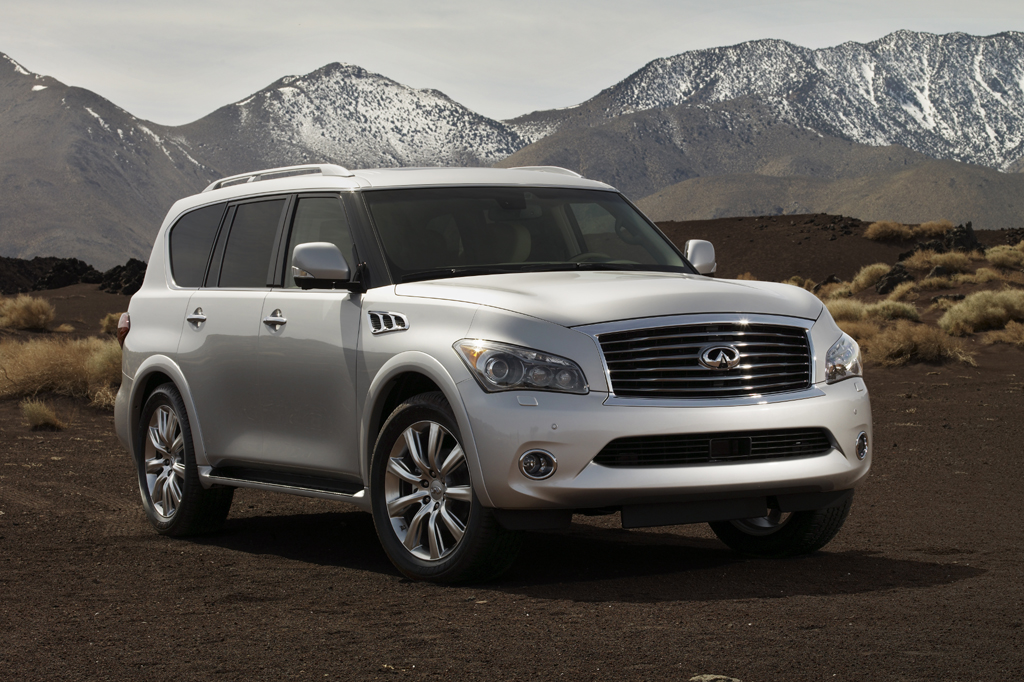 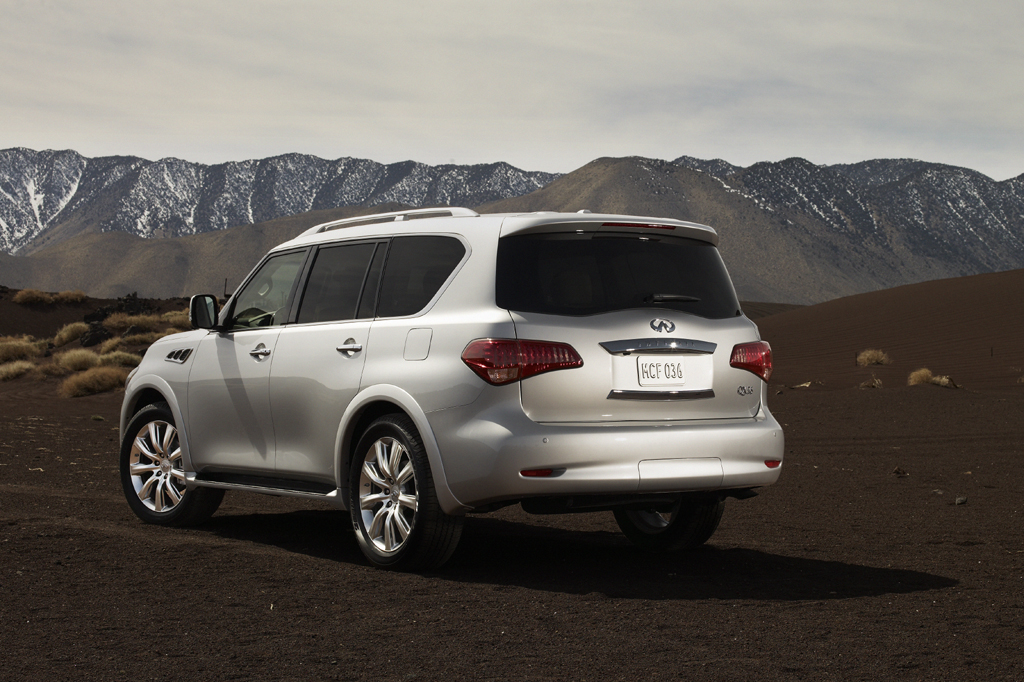 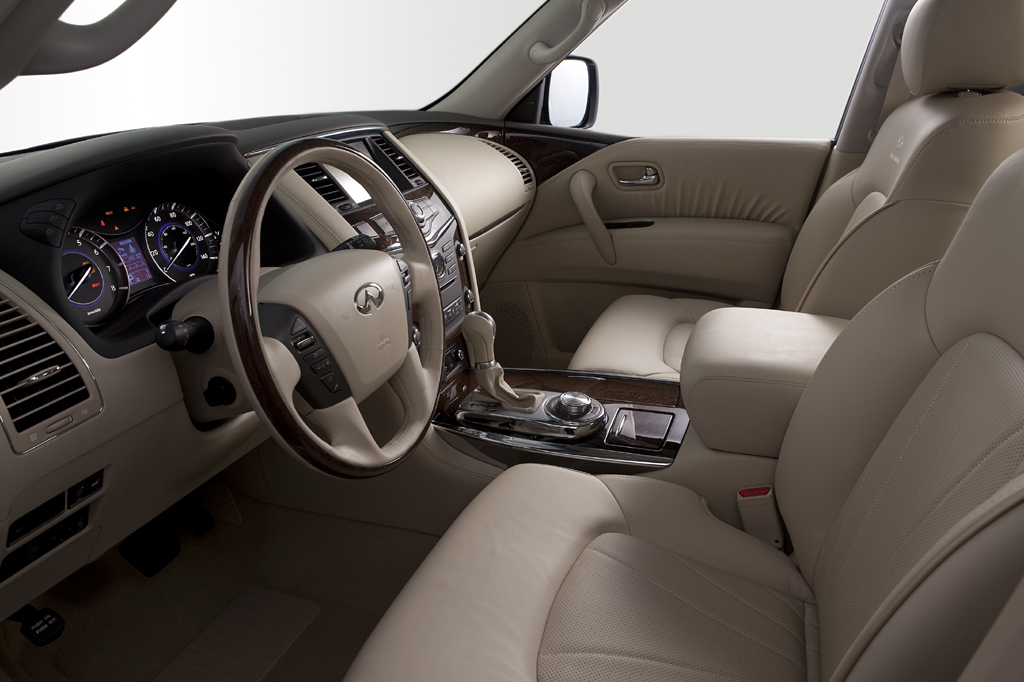 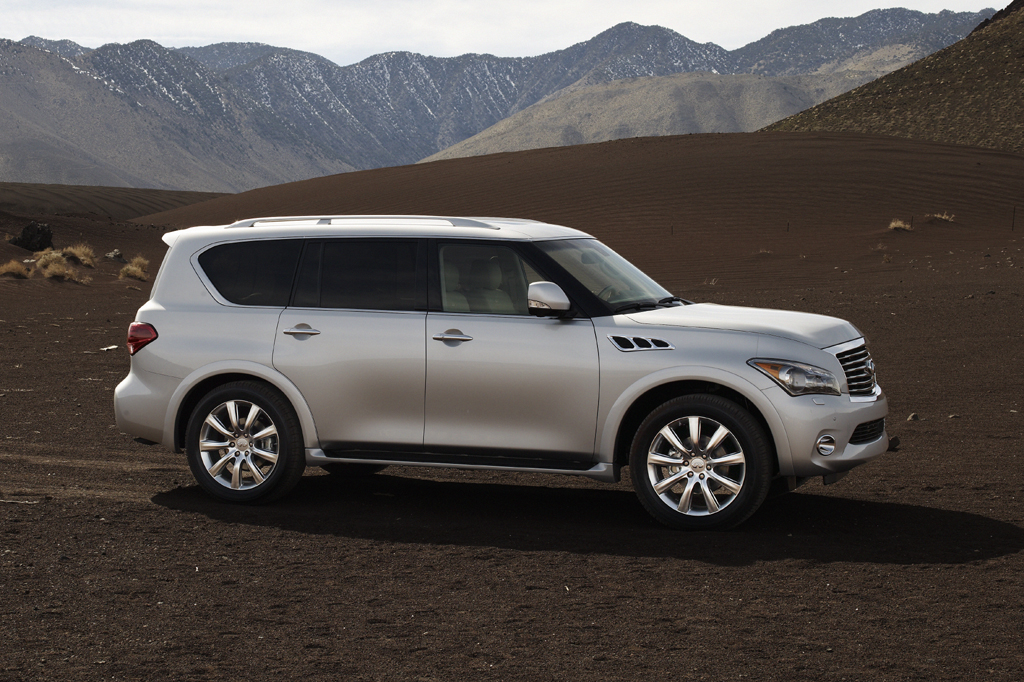 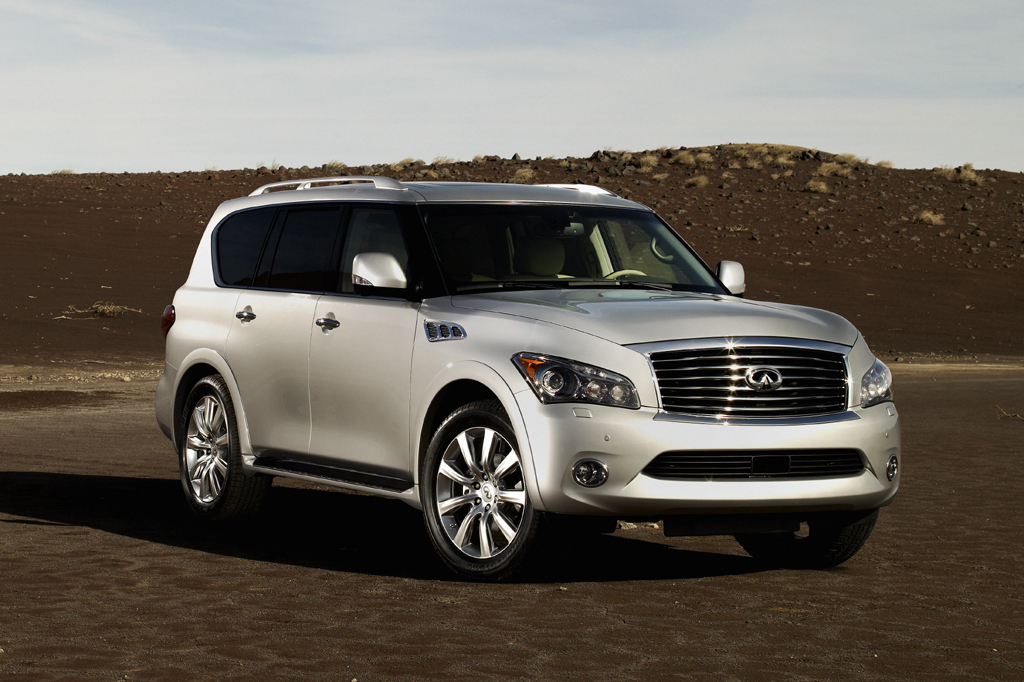 Infiniti’s redesigned QX56 impresses with a tastefully-finished interior and a smooth, well-controlled ride–especially with the available Hydraulic Body Motion Control System. Downsides include a load floor that isn’t flat in seven-passenger models, as well as the trade-offs in fuel economy and maneuverability expected of an SUV that’s this large. QX56 is much more visually restrained than the extroverted Cadillac Escalade, and hasn’t offered nearly as many options. Still, the QX56 is a very likable and capable premium-large SUV that deserves consideration from shoppers in this class. Note that the same collection of Infiniti warning systems that annoys on the M-series cars annoys here. Be aware that living with these aids may grow wearisome.

In addition to freshened styling, the redesigned Infiniti QX56 obtained more power for 2011. The QX56 shared elements of its basic design with the Nissan Patrol, a large SUV sold primarily in the Middle East. For 2011, QX56 was longer, wider, and lower than the model it replaced. Production of this premium-large SUV also shifted to Japan from the United States. The sole powertrain teamed a 400-horsepower, 5.6-liter V8 engine with a seven-speed automatic transmission. This replaced a 320-horsepower, 5.6-liter V8, coupled to a five-speed automatic. Infiniti’s QX56 was available in a single trim level, with either rear-wheel drive or four-wheel drive that could be left engaged on dry pavement and included a low-range gear for off-roading. Maximum towing capacity was 8,500 pounds. The name was changed to QX80 in 2014.

Fuel economy, as expected, is nothing to get excited about. In Consumer Guide testing, 4WD QX56 models averaged 14.4 to 16.3 mpg in city/highway driving. Another 4WD example got just 12.1 mpg in mostly city use. Infiniti recommends premium-grade gasoline.

Though big, the QX56 feels relatively nimble for its size, at least on the highway and along suburban streets. Straight-line stability is good, and the steering offers reasonable feel for such a large SUV. Braking control is fine, too.

Some road rumble and wind noise are almost always audible, but neither is loud enough to intrude. The big V8 engine is nearly silent at cruise.

Most controls have an arrangement similar to that of Infiniti’s G-series midsize cars, and that’s basically a benefit. Most functions are intuitive and clearly marked. On the downside, we’ve found distracting the multitude of lights and sounds generated by false positives from warning and safety systems including blind-spot alert, lane-departure warning, collision mitigation, and even real-time weather. Interior materials and assembly quality are fine. Soft leathers and tasteful detailing create an appropriately classy aura.

Front occupants ride high on wide, supportive seats that provide ample headroom. Wide armrests add to long-haul comfort. Pedals are not adjustable, and some testers have found them to be too far forward, which compromises seating position and knee room a bit.

Entry and exit to the second row are easy. Original buyers could choose two bucket seats or a three-person bench seat for the second row. Either seat is comfortable, but the buckets are particularly inviting. The second-row seats tip and fold easily–by pushing buttons from the driver’s seat, or lifting a latch on the backrest–for access to the third row. Entry and exit to the third row demands the typical crouch-and-shuffle. Though the seat bottom sits close to the floor, 6-footers can fit into the third row for short trips.

Space for groceries is adequate behind the third-row seat, and all models have a modest amount of underfloor storage. The split third-row backrests power-fold down–slowly–to extend the load floor. The second row tumbles easily, but the resulting floor slopes upward towards the front. If you often haul large items, steer clear of the available second-row buckets. The large console that came with the buckets remains several inches above the load floor when all seats are folded, resulting in a fairly large obstruction.