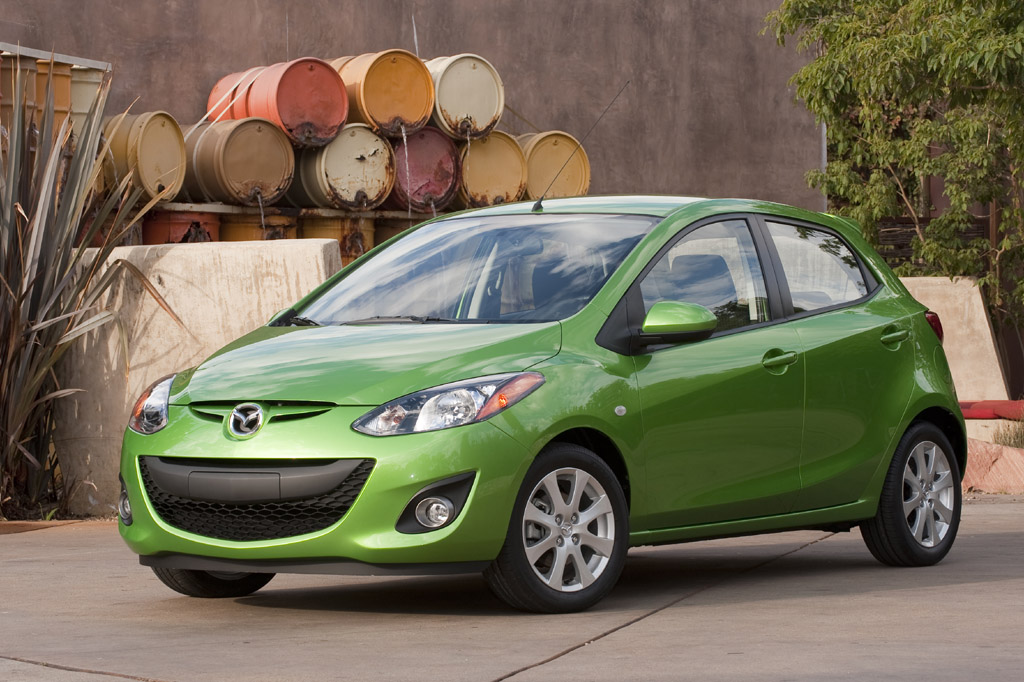 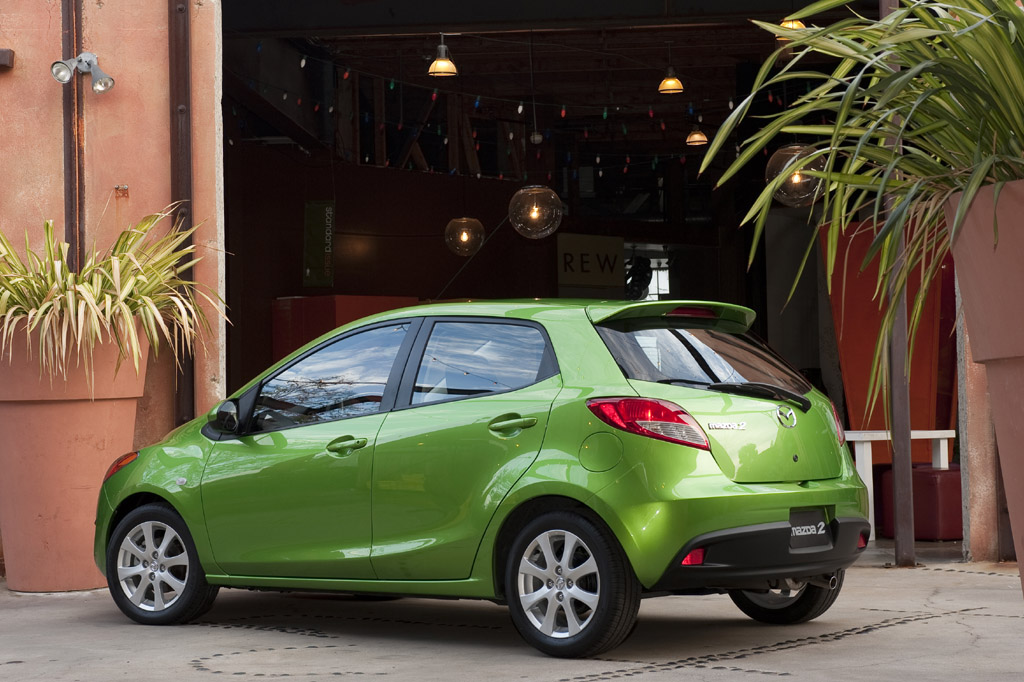 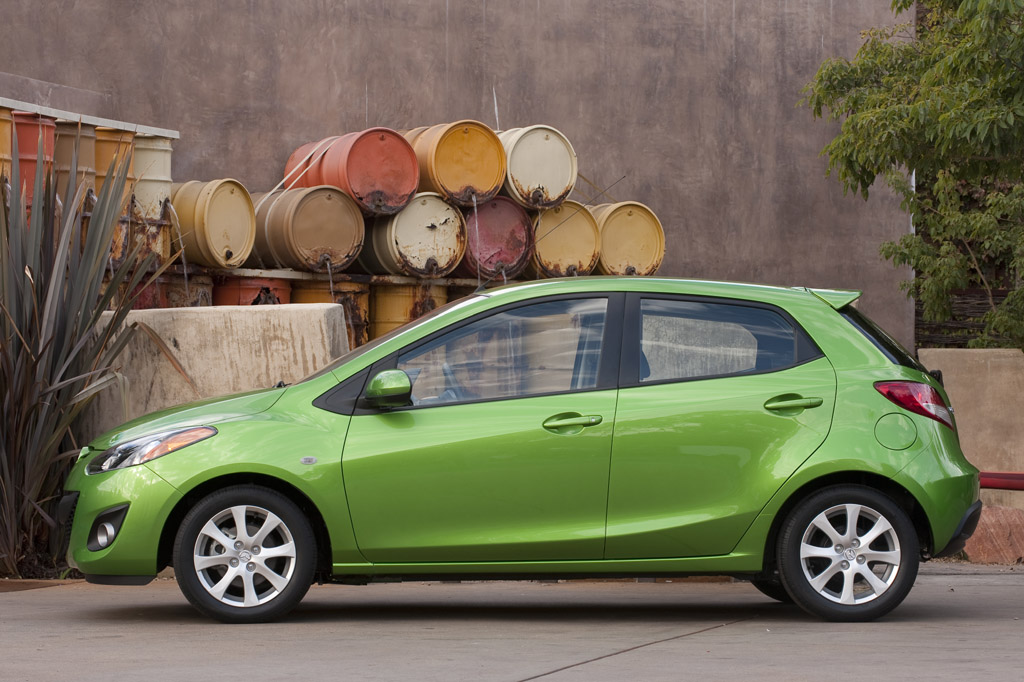 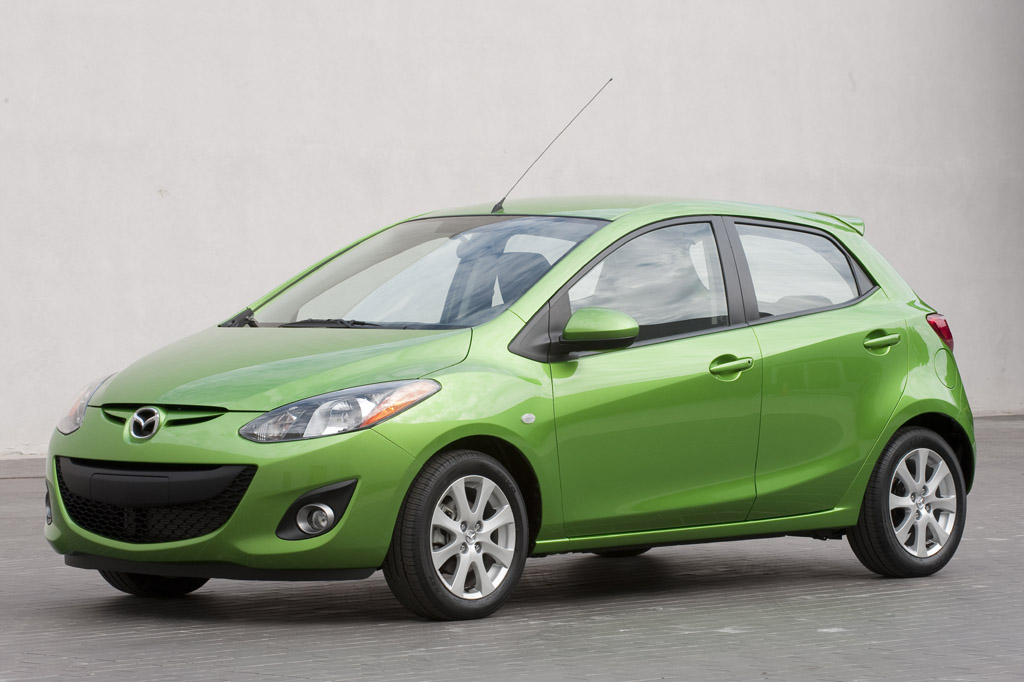 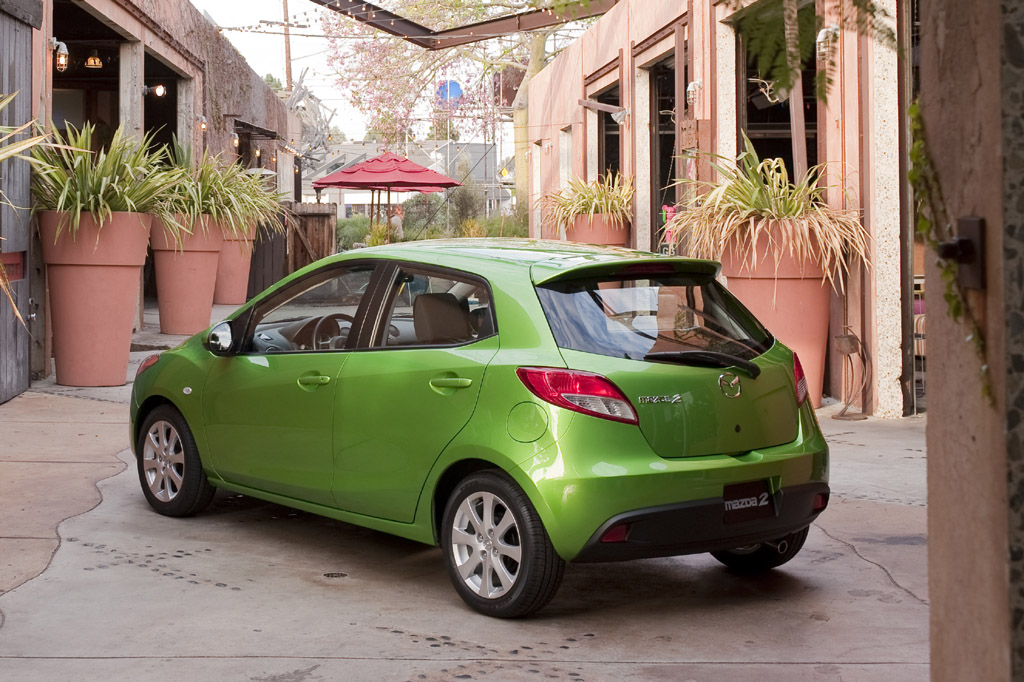 Mazda’s entry-level car succeeds as a refined, fun-to-drive hatchback, with a cabin ambiance that belies its new-car price. Acceleration is far from quick, and it’s not quite as versatile as some rivals. These issues have been balanced by the Mazda 2’s reasonable new-car prices and lengthy list of standard features. Used-car prices might be less compelling, because Mazda 2s are holding their value rather well. Even so, if you’re shopping small, put this Best Buy subcompact near the top of your consideration list.

The Mazda 2 debuted for 2011 as this Japanese automaker’s new entry-level car. Available in several worldwide markets as the Demio, the Mazda 2 offered in the United States and Canada was a four-door hatchback, offered in Sport and Touring trim levels. The sole powertrain teamed a 100-horsepower, 1.5-liter four-cylinder engine with a five-speed manual or four-speed automatic transmission. Mazda noted that controls were concentrated in the central area of the dashboard, with those used most often positioned closer to the driver. Standard safety features included antilock braking, traction control, an antiskid system, curtain side airbags, and front side airbags. This was the first Mazda vehicle in North America to get the company’s Brake Override system, which was designed to prioritize the brake pedal over the accelerator pedal, should both be engaged simultaneously. Air conditioning, power windows/locks/mirrors, remote entry, and 60/40 split-folding rear seat backs were standard on all models. Both models had 15-inch wheels: steel on the Sport edition and alloy on the Touring. Standard on the Touring edition were cruise control and a leather-wrapped steering wheel with audio controls. Touring versions also had upgraded cloth seat fabric with red piping, fog lights, and a rear roof spoiler. Following its global introduction in 2007, the early version of the Mazda 2 had been named “World Car of the Year.” Subcompact competitors for the Mazda 2 included the Chevrolet Sonic, Ford Fiesta, Honda Fit, Suzuki SX4, Scion xD, and Hyundai Accent.

Each Mazda 2 contained a 100-horsepower, 1.5-liter four-cylinder engine, teamed with either a five-speed manual or four-speed automatic transmission.

Though it’s no rocket of any sort, the Mazda 2 enjoys linear throttle response and light-for-the-class curb weights. There’s virtually no difference in acceleration between the manual and automatic transmissions. The manual’s shifter “throws” are a trifle long, and the clutch is vague, making it sometimes difficult to launch the car smoothly from a stop. The automatic, despite having just four speeds, provides smooth shifts and prompt response.

Ride quality ranks as firm, expected from Mazda, but the 2 exhibits good overall bump absorption. A subcompact-typical wheelbase leads to some hobby-horse pitching and unwanted side-to-side motions. They’re never excessive, however, and the Mazda 2 scores as a solid highway cruiser.

Among the best in class for handling, the Mazda 2 stands out for its well-controlled body lean and excellent steering feel. The Mazda 2 utilizes an electric power-steering system, which is designed to improve fuel economy. Unlike many rival systems, this Mazda’s steering feels very natural, with light effort at low speeds and more road feel on the highway. The brakes deliver short, controlled stops.

Subcompact-typical levels of noise suppression are the rule here. The engine is fussy when accelerating, but quiet when cruising. Wind noise isn’t an issue, but the Mazda 2 exhibits relatively high levels of tire thrum, regardless of road surface.

Audio controls are clearly marked and easy to use. Climate controls are handy rotary dials, though their markings to indicate which way air flows are a bit on the small side. Also small is the audio system’s LCD display. While an auxiliary stereo input port has been standard, we wish Mazda would have offered a USB port for connecting digital-music players. Unlike many other Mazdas, the 2 does not require drivers to select between a day and night setting for instrument-panel brightness. It uses a traditional rheostat switch, which is a throwback that we appreciate. The Mazda 2 belies its new-car price with plastic trim that, while hard and hollow, is nicely grained. Seat fabrics have a very high-quality feel. Touring models have a leather-wrapped steering wheel and red contrast piping, which lends a slightly sportier touch. Lack of padding on the door armrests is a bit of a letdown, considering that the doors themselves have nice, soft fabric inserts. Note that Mazda 2 Sport models sold in Canada do not have fabric door inserts. Rather, they make do with dull plastic, which cheapens the ambiance.

Front-seat headroom and legroom are fine, though not exceptional among subcompact hatchbacks. Seats are very comfortable and feature surprisingly prominent side bolsters, which do a good job of holding occupants in place. A tilt steering wheel has been standard, but telescopic adjustment was unavailable. Visibility is good all around.

In the backseat, an adult of about 5-foot-8 will have just adequate space behind a like-sized front passenger. A larger adult will be cramped for legroom and knee clearance. Headroom is good, though.

As for cargo room, the Mazda 2’s split-folding rear seatbacks are helpful, but this car doesn’t have the overall space or versatility of rival subcompact hatchbacks, such as the Honda Fit. Interior storage is disappointing. The door pockets are reasonably sized, but the glovebox is small. No center console was standard, but Mazda offered one as a dealer-installed accessory.

2011, 2012, 2013, 2014, Mazda, Used
For more than 50 years, car shoppers have been relying on Consumer Guide Automotive. Our editors test drive and thoroughly evaluate virtually every new car, truck, minivan, and SUV sold in America.