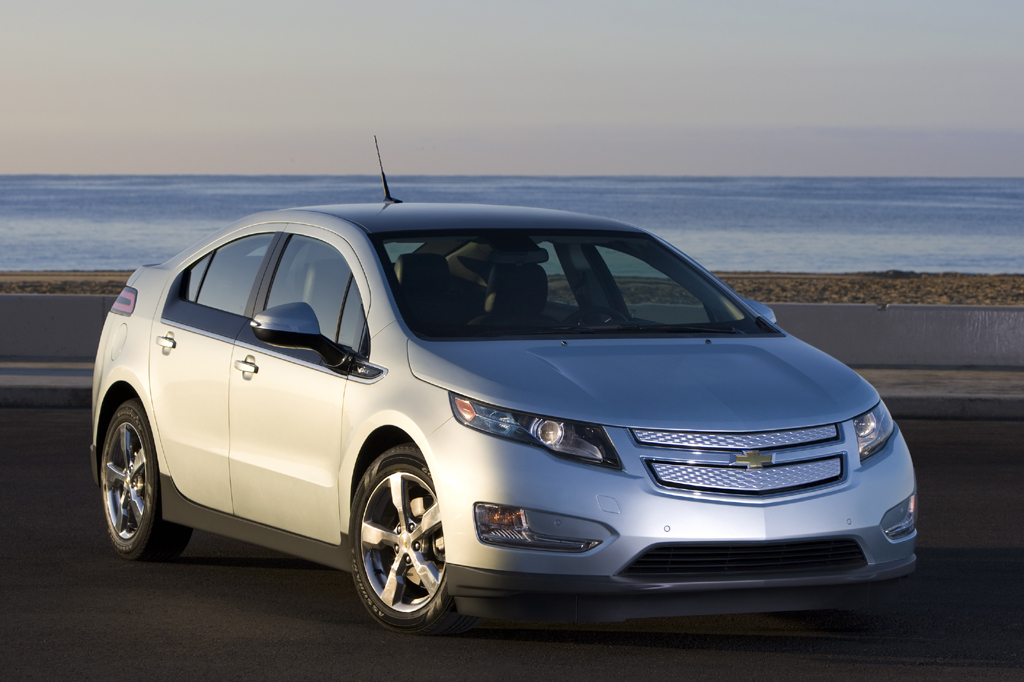 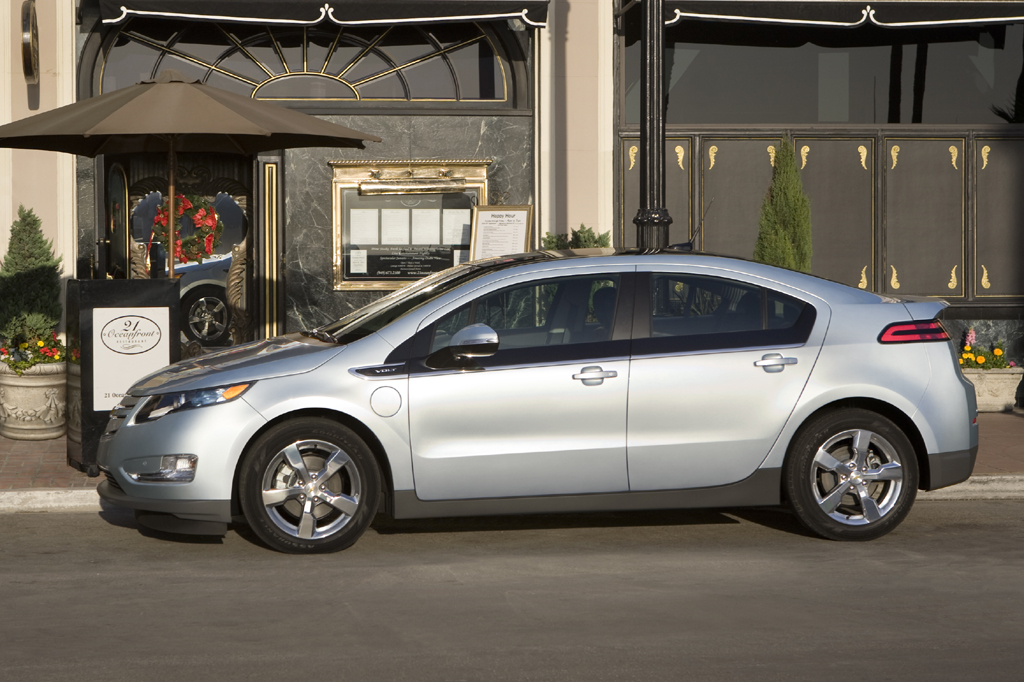 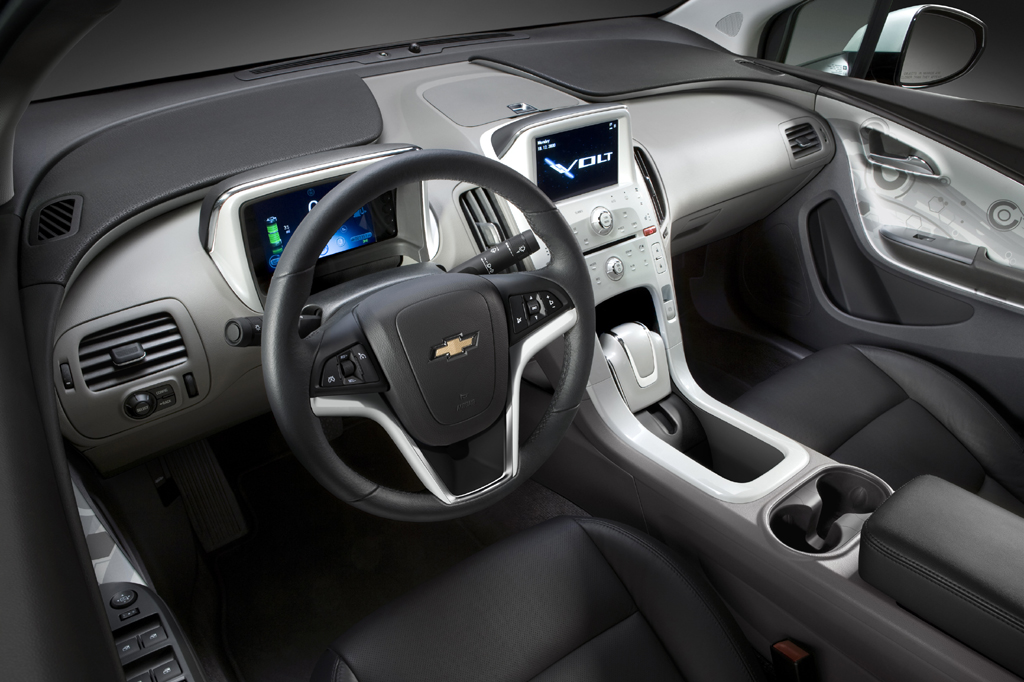 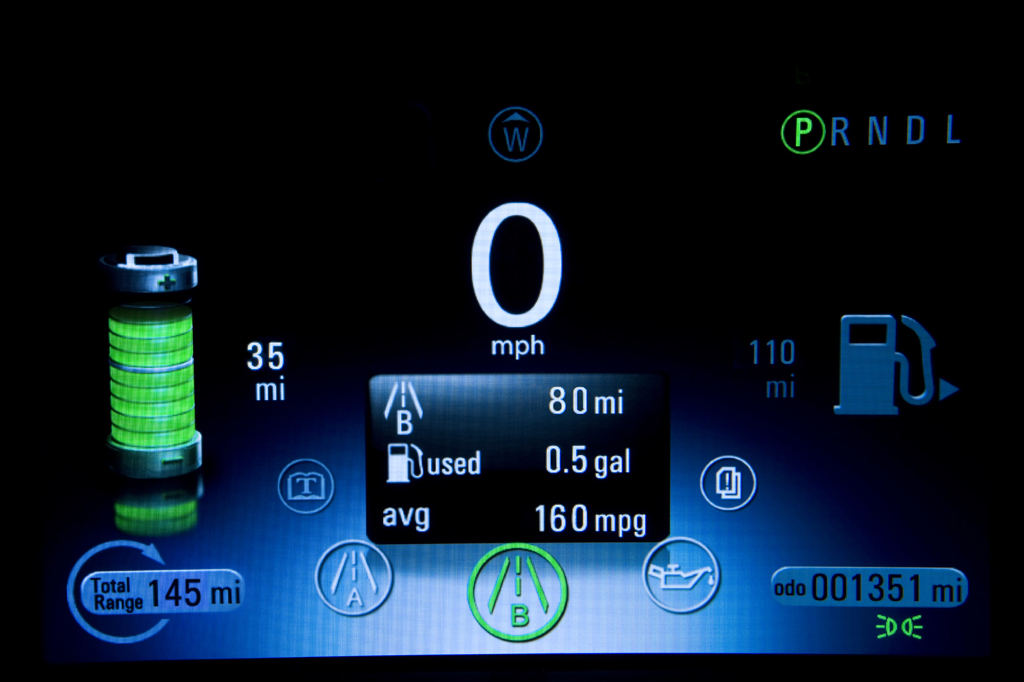 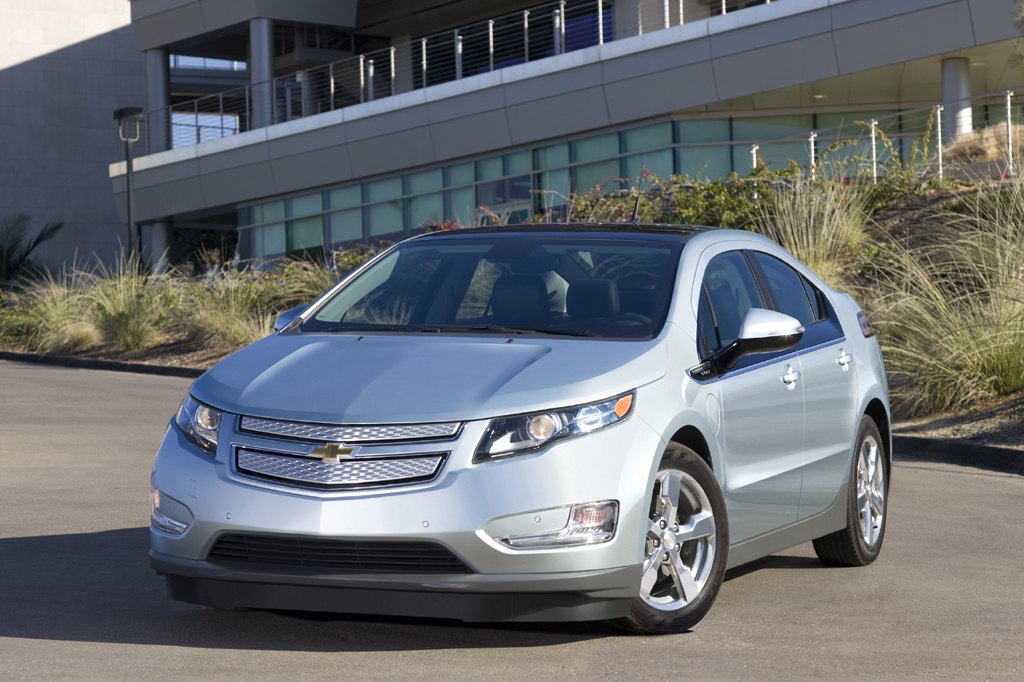 Volt is a technological wonder that offers the ability to drive on electric power only (for a limited distance), while its gas engine relieves the “range anxiety” often associated with pure-electric cars. Besides that, it’s dynamically capable, comfortable for four adults, and contains loads of high-tech convenience features, including pre-heating and cooling of the interior. Although its primary appeal is to the “Go Green” crowd, Chevrolet’s Volt could easily stand on its considerable practical merits. Don’t expect to find many used examples for a while.

Chevrolet’s technically innovative Volt made its debut for 2011 as General Motors’ first plug-in gas/electric vehicle. Though distinctive in appearance, the production Volt looked nothing like the concept car that had debuted at Detroit’s auto show in 2007. GM called this four-passenger, four-door hatchback an “extended-range electric vehicle” with a Voltec propulsion system. Like hybrid cars, the Volt had two power sources: a gasoline engine and a battery-powered electric motor. But similarity ended there, and Volt operation differed considerably. Serving as a generator to charge the battery pack that drove the electric motor, the gasoline engine provided almost no actual power to drive the car’s wheels. A Volt could operate solely on battery power for up to 38 miles (as estimated by the EPA). At that point, the gas-engine “generator” kicked in, to keep the vehicle operational by providing energy to the electric drive unit. With the gas engine now running, a Volt could travel up to 344 additional miles, according to General Motors. Before reaching that point, the fuel tank could be filled just as in a normal car to give another 300 miles of range.

If the Volt was plugged into an ordinary 120-volt wall outlet, its battery could be fully recharged in 10 to 16 hours. Charging time dropped to about four hours with a special 240-volt charging station. Measuring 5.5 feet long, the T-shaped lithium-ion battery pack weighed 435 pounds. The gasoline engine was an 84-horsepower, 1.4-liter four-cylinder. Combined total output was 149 horsepower.

Standard safety features included antilock braking, traction control, antiskid system, curtain side airbags, front side airbags, and driver and passenger knee airbags. Among the available features were a remote-charging and vehicle-control program that owners could download and run from Blackberry and Apple iPhone cell phones. Among other things, it allowed the owner to pre-heat or pre-cool the vehicle before getting in. A navigation system was standard. So was a hard drive for storing digital-music files. Leather upholstery, heated front seats, front- and rear-obstacle detection, and a rearview camera were optional. Built in Detroit, Chevrolet’s Volt had no direct competitors, apart from pure-electric models like the Nissan Leaf and Mitsubishi i (i-MiEV).

General Motors called the Volt an “extended-range electric” vehicle, which meant that propulsion was provided by an electric motor. After running for close to 40 miles on battery power alone, a gasoline engine kicks in to function as a generator, providing another 300 miles or more of operation. The Volt can be plugged into an electrical outlet for charging, so it will be ready to deliver that initial battery-only range afterward. As a result, if only short trips are taken and the Volt is charged between each trip, it could theoretically operate without consuming any gasoline at all.

1. Horsepower/torque figures shown are for total output. The Volt’s gasoline engine is rated 84 horsepower. EPA estimates shown are for operation with the gas engine running. The EPA equivalency estimate for electric-only operation is 95/90 mpg.

Despite its complex powertrain, the Volt drives surprisingly similar to a regular car. In full electric operation, in its default “normal” setting, acceleration is a bit tepid only for about the first 15 feet. At that point, power comes in with a smooth rush. In the “sport” mode, throttle response is nearly instantaneous and quite strong. When the gas engine kicks in, acceleration softens slightly, but most drivers will never feel the Volt lacks for power. When the battery is depleted, the gas engine kicks in almost imperceptibly to keep the battery pack charged and allow the Volt to keep rolling.

EPA fuel-economy estimates are 35-40 mpg in gas-engine mode, and the “cost equivalent” of 90-95 mpg in electric-only mode. Range in electric mode is advertised at 25-50 miles. In Consumer Guide testing, we averaged 29 to 41 miles in battery-only mode. With the gas engine operational, we averaged 36.4 to 43.7 mpg. Overall fuel consumption averaged 59.8 mpg, including periods of instrumented testing with the gas engine running. Real-world fuel economy can vary greatly. Individual Consumer Guide testers managed to average between 56.8 and 168.1 mpg. Chevrolet estimated as much as 344 miles (approximately) of additional range after the gas engine came into action, which also seems conservative. At the end of that distance, you can just fill the fuel tank as in a normal car and go another 300 miles or thereabouts. Volt requires premium-grade gas.

Volt’s ride is firm and well-controlled but reasonably compliant–about on par with that of most other compact cars.

Steering effort is consistently light, with a fairly precise but artificial feel. Body lean is well controlled, even during fast cornering. Braking feel is fine, though there’s a slight “let up” just before the car comes to a stop, requiring just a bit of added brake-pedal pressure. This is due to the regenerative braking, which helps recharge the battery. Shifting to the transmission’s “Low” range increases the regenerative effect, which some drivers might find handy in stop-and-go driving.

Particularly in all-electric mode, the Volt is impressively quiet, especially at around-town speeds. When the gas engine kicks in, it adds a background moan that periodically varies regardless of road speed. On the highway, some wind noise comes from the area of the side windows, but very little road noise is evident.

Instruments are easy to read. The digital speedometer, battery/fuel-level bar-graph indicators, and other information are located on a screen in front of the driver. A plethora of energy-consumption data is available in any number of configurations–almost to the point of distraction. Audio and climate controls are mounted high within easy reach, but their “buttons” are touch-sensitive points on a flat plastic panel. Those buttons are not logically grouped, forcing eyes off the road for longer than we’d like. Readouts are shown on a high-mounted touch screen that also controls navigation functions and displays the navigation map. Programming the many different drive functions and navigation commands demands some study.

Padded interior surfaces include the tops of the doors (where you’d rest your elbow), armrests, and console lid. Other surfaces are hard plastic, with the glossy door inserts failing to dress up the cabin. The optional Premium Package brings nice-looking leather upholstery.

Tall adults can expect plenty of front-seat headroom and legroom, though the driver’s right knee may contact the center console. Height-adjustable seats and a tilt/telescopic steering wheel make it easy to find a good driving position. Seats feel comfortable for longer journeys. Visibility is hindered by fairly thick front pillars, wide center pillars, and very thick rear pillars, which block much of the view to the rear corners and make backing up a bit tricky. If installed, the optional rear-obstacle detection and rearview camera help in this regard. In the split rear window, the lower half is rather narrow, while the dividing bar blocks some of the view astern.

Rear seating consists of two bucket seats divided by a useful center console, so only four people fit in a Volt. Legroom and toe space are okay for adults unless the seats in front are far back and far down, in which case the rear seat is inhospitable to human habitation. Headroom is sufficient for adults up to about 5’11”. Exiting the Volt is slightly restricted by a smallish door opening.