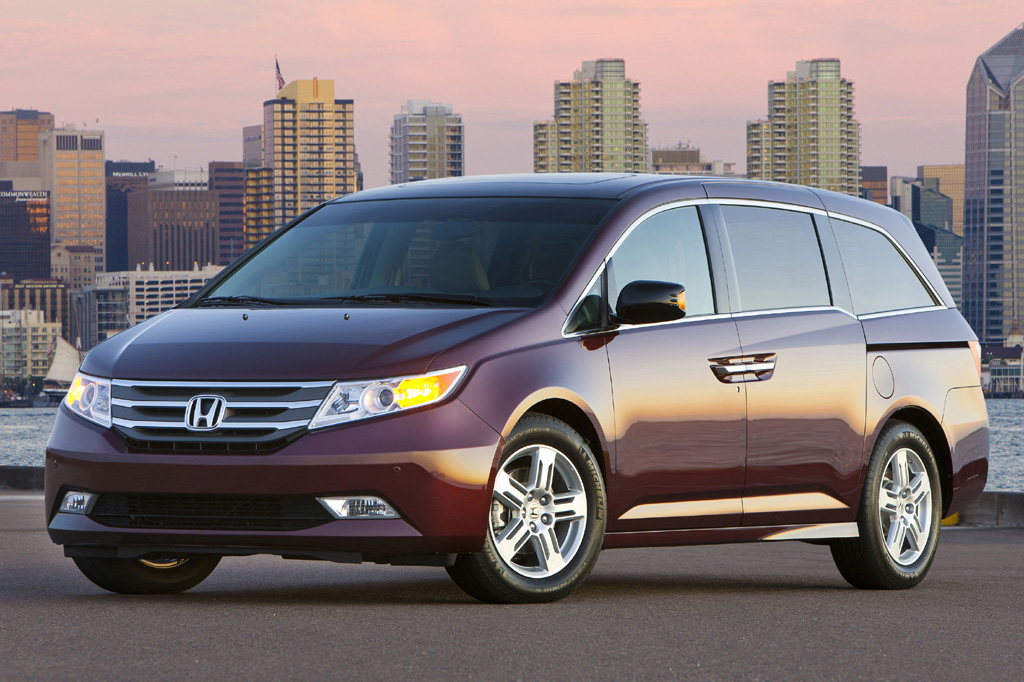 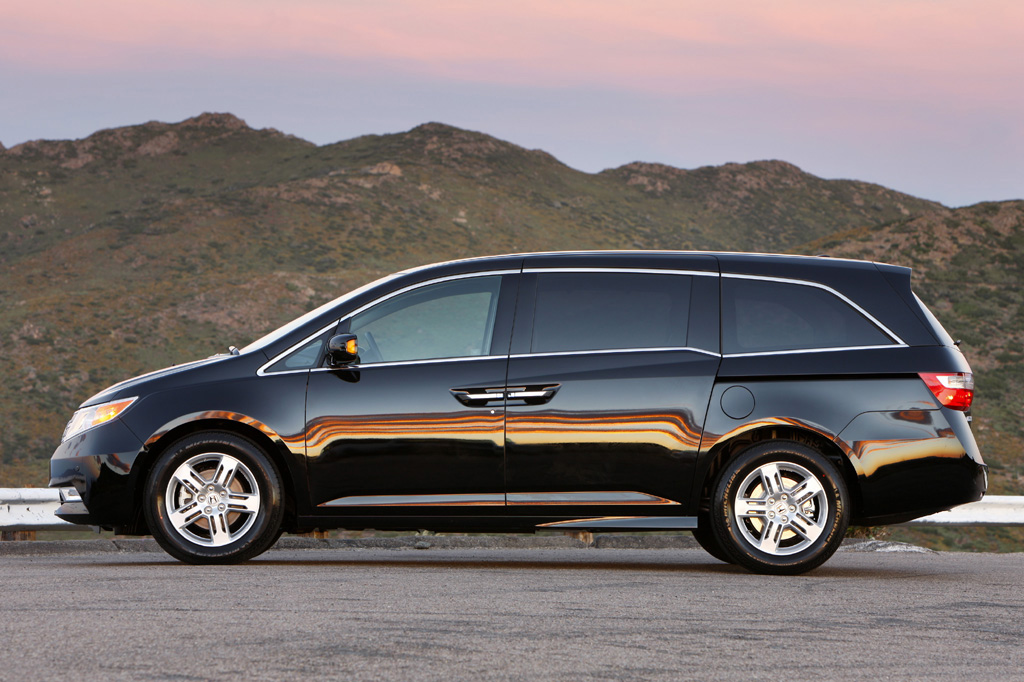 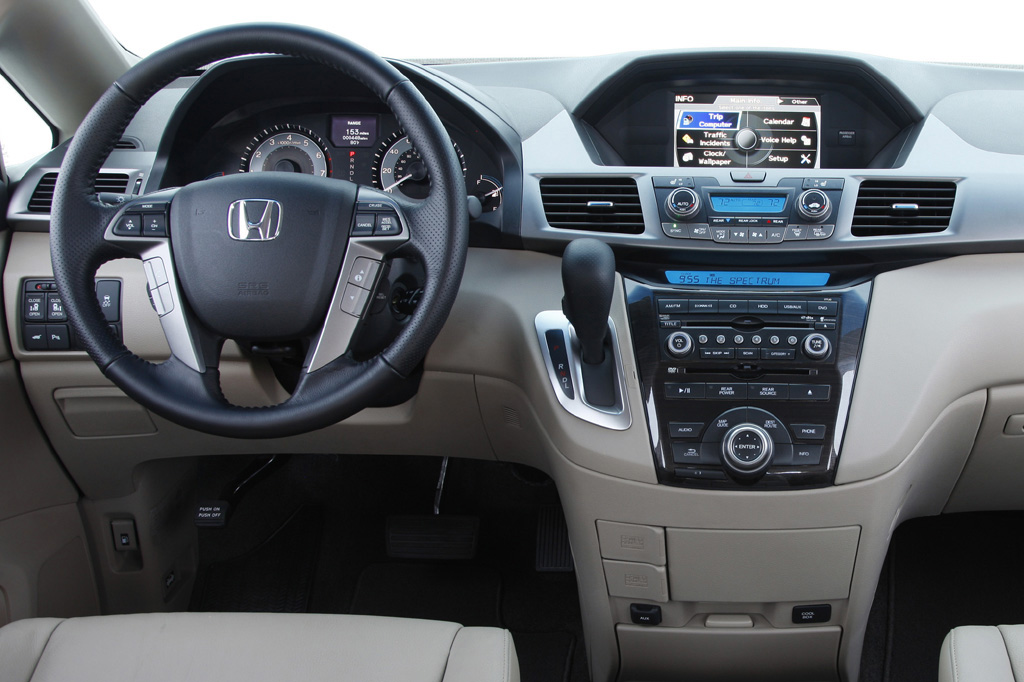 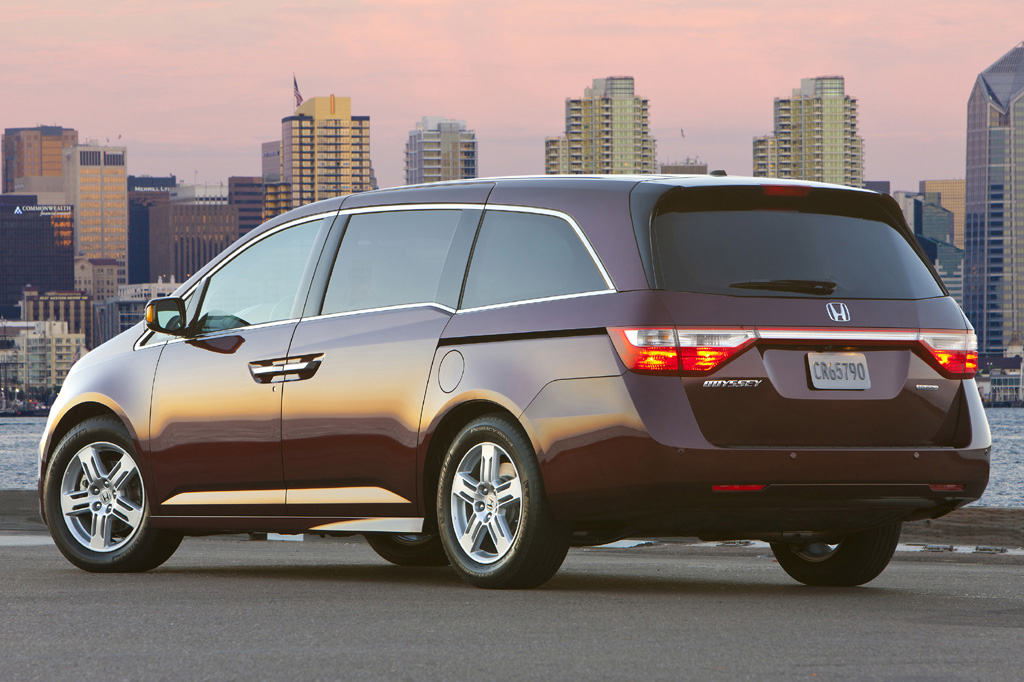 Some manufacturers have given up on minivans, but Honda came out swinging for 2011 with a sleekly styled people-mover that tops its esteemed predecessor in virtually every way. Even base LX models came with a host of standard features, while upper-line models offered a dizzying array of high-tech gizmos. Those extras could raise new-car to prices rather lofty levels, but the difference between models on the secondhand market is generally less dramatic. All are family-friendly vehicles that are quiet, enjoyable to drive, and dynamically competent, making the Best Buy (2012) Odyssey a must-see in the shrinking minivan market.

Redesigned for 2011, the Honda Odyssey gained fresh styling and a wider interior. Additional power was accompanied by significantly improved EPA fuel-economy numbers. Honda’s front-wheel-drive minivan came in LX, EX, EX-L, Touring, and Touring Elite trim levels. A 3.5-liter V6 with Honda’s Variable Cylinder Management cylinder deactivation was the only engine; it now produced 248 horsepower, up from the prior year’s 244. With this engine change, EPA fuel-economy figures rose by 2 to 5 mpg. Honda’s Active Noise Control, designed to electronically quell engine noise, was standard on all models. A five-speed automatic transmission was standard on all but the Touring and Touring Elite models, which got a six-speed automatic.

Standard safety features included all-disc antilock braking, traction control, an antiskid system, front side airbags, and curtain side airbags (with rollover deployment) that covered all seating rows. Power sliding rear-side doors were standard on all but the LX. The second row of the LX model had two bucket seats, giving it seven-passenger capacity. All other models added a center second-row seat for eight-passenger capacity. Second-row seats could move fore-and-aft about 5 inches and the outboard seats could move laterally about 1.5 inches. In all models, the third row seated three and folded into a well in the cargo floor, which otherwise might be used for storage. LX models had four child-seat anchors, while other models offered five. Available features included a tilt/telescopic steering wheel, three-zone automatic climate control, a navigation system with voice recognition and FM traffic monitor, and a wide-angle rearview camera. Also offered were a wireless cell-phone link, blind-spot alert, a refrigerated “cool box,” and 115-volt power outlets. The available DVD entertainment system could be fitted with a 16.2-inch-wide screen capable of displaying one wide image or two narrower ones, along with HDMI (High-Definition Multimedia Interface) ports for video game systems, Blu-Ray players, or other electronics. Honda’s Odyssey competed against such minivans as the Dodge Grand Caravan, Nissan Quest, and Toyota Sienna, as well as the Chrysler Town & Country and Volkswagen Routan.

Sole powertrain for the front-drive Odyssey has been a 248-horsepower, 3.5-liter V6 engine and five-speed automatic transmission (six-speed on Touring and Touring Elite models).

Acceleration is strong in all situations, with good response from a stop and decent passing power. Both transmissions upshift smoothly, but the five-speed doesn’t always downshift promptly in passing maneuvers; the six-speed behaves better in that area. Cylinder deactivation, used to save fuel, is virtually seamless.

Fuel economy is still essentially minivan-typical, but the boost in EPA estimates over prior Odysseys is quite welcome. In Consumer Guide testing, Odyssey models equipped with the six-speed automatic transmission averaged 18.5 to18.8 mpg with slightly more city driving than highway use. Top-line Touring and Touring Elite versions use the six-speed; all others have a five-speed automatic. Regardless of transmission, Odyssey uses regular-grade gasoline.

Odyssey’s ride is among the firmest in the class, yet most road imperfections are well-absorbed. Some tire patter is noticeable in around-town driving, but highway cruising is impressively smooth. Ride quality differs little between the Touring’s 18-inch tires and other models’ 17s.

Handling qualifies as sporty for a minivan. Odyssey exhibits only moderate body lean in fast turns. The electrically-assisted power steering feels very light at all speeds, but responds well. Response is a bit sharper with the Touring models’ 18-inch tires. On all models, a relatively tight turning radius aids in close-quarters maneuvering.

Quietness is a virtue. In fact, Odyssey exhibits near-luxury levels of serenity. Wind and road sounds are well muffled at highway speeds, and bump noise is low around town. When it’s heard at all, the engine produces a refined note that grows to a muted growl under throttle.

Climate controls are mounted high and mostly handy, but while temperature is adjusted with a rotary knob, mode and fan speed are selected using repetitive-step pushbuttons. The audio system has volume and tuning knobs but tiny, pencil-diameter station-select buttons. The dash-mounted transmission lever partially blocks access to some audio functions, though redundant steering-wheel controls compensate somewhat. Overall, Odysseys have too many small, lookalike buttons. The available navigation system is controlled by a low-mounted joystick, though its images are displayed on a high-mounted, easily-read dash screen.

Odyssey’s interior is artfully designed and decently trimmed, with many soft-touch surfaces along with hard plastic that don’t look down-market. The available two-toning and leather upholstery add some richness, if such an example can be found.

Adults can expect plenty of room up front. Entry and exit are easy through large door openings, and step-up height is modest. Visibility is generally good except to the rear corners, where the second-row headrests block the view unless they’re either removed or the seatback is folded. Oddly, third-row headrests retract and don’t block the view behind when they’re lowered; too bad the second-row’s headrests don’t do the same. The available wide-angle rearview camera, which “sees” in a 180-degree arc, helps greatly when backing out of parking spots.

An Odyssey LX has two bucket seats in the second row, but all other models add a narrower center seat with a backrest that folds down to become an armrest/console. All second-row seats slide fore/aft about 5 inches and can be removed. Outboard seats also slide laterally about 1.5 inches. Set wide, there’s more shoulder room for the center passenger — or a larger walk-through between the seats to the third row. Setting them closer together expands an already generously-sized side pass-through to the third row. Head, leg, and toe room in the third row are sufficient for adults, particularly if the second-row seat is moved forward, but shoulder room is tight for three-across seating. LX models have four child-seat anchors, while all other models offer what Honda claimed was a class-leading five. All but the LX have power-sliding side doors with convenient open/close buttons mounted on the side pillars next to front seatbacks. Models with DVD entertainment can have either an 8-inch drop-down screen or a 16.2-inch screen that can display one wide image or two narrower ones. An HDMI plug for external electronic devices is included.

Cargo room is impressive, and not just in terms of space. The third-row seats flip down into a floor well (larger folks can pull on a strap and do it one-handed) that otherwise serves as a big cargo bin. Second-row seatbacks flip down easily, and if the seats are removed, Honda says a 4×8 sheet of plywood will fit flat on the floor with the tailgate closed. Passengers will find a bounty of cupholders, trays, and storage bins of various sizes. Front-seaters get both upper and lower map pockets. Also available is a “cool box” in the lower front dash for keeping drinks cold.