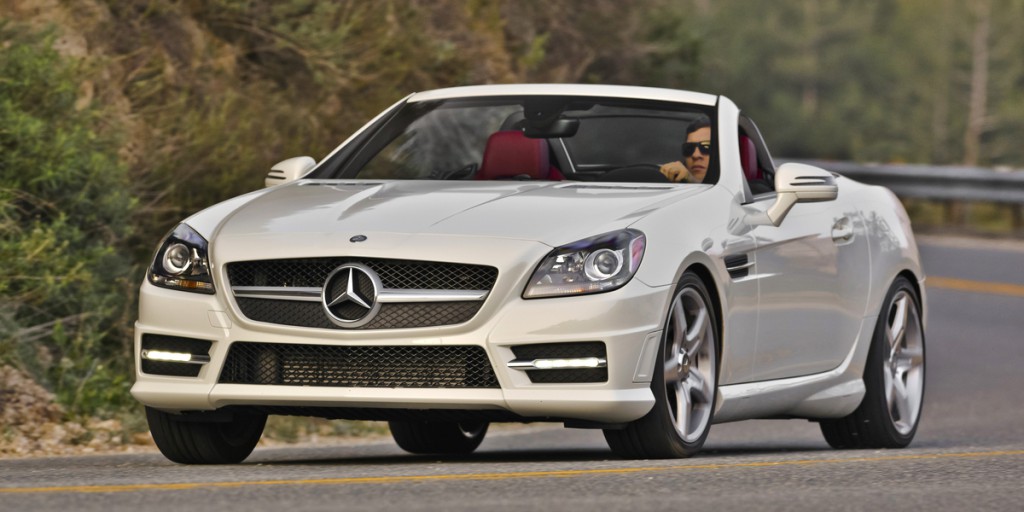 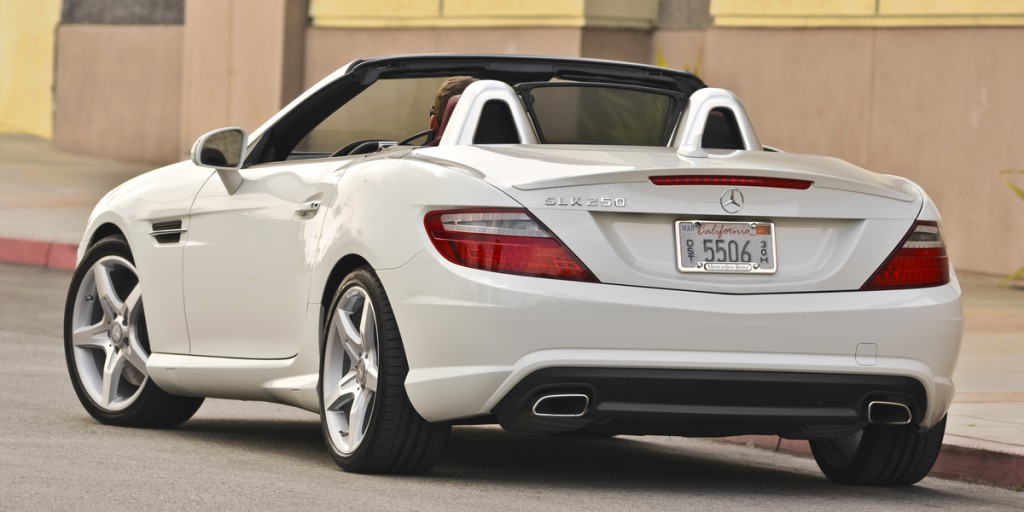 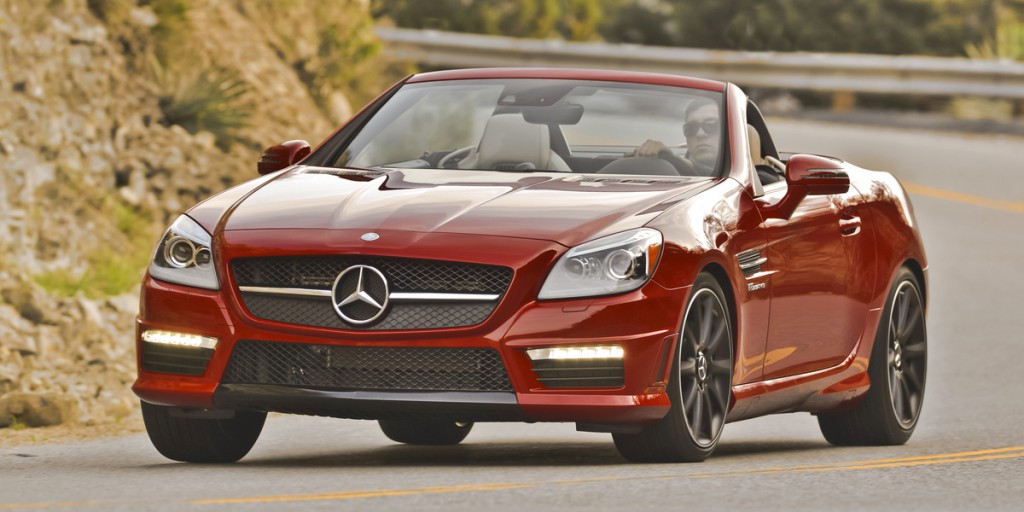 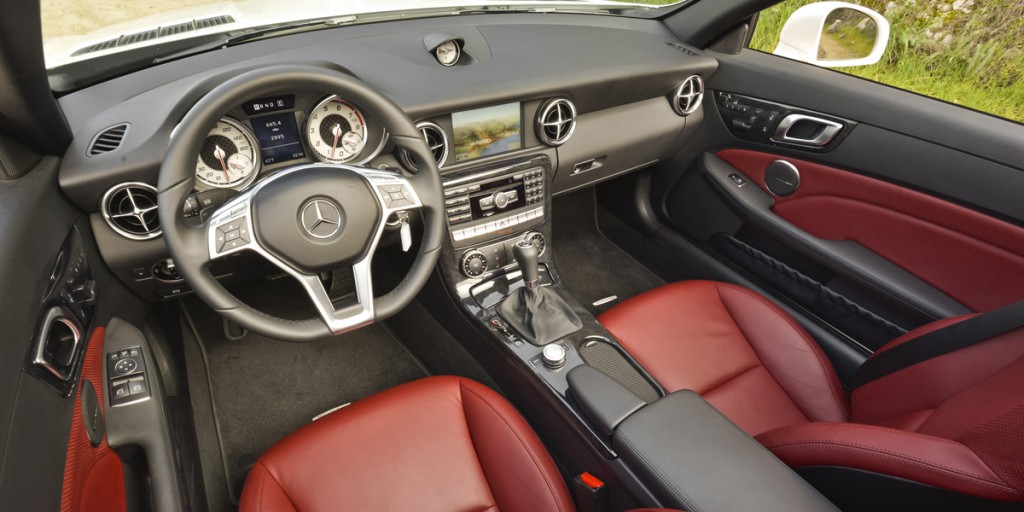 The SLK is sporty and engaging to drive, but it still delivers the quality and refinement expected of Mercedes. The V6-powered SLK350 delivers great performance, but at a price when new. Current Porsche Boxster owners might not give this car a second glance, but anyone considering the Audi TT or BMW Z4 should give the SLK a spin.

The redesigned-for-2012 SLK-Class was the smaller and less expensive of Mercedes’ duo of two-seat roadsters. The abbreviation “SLK” was short for the German words for sporty, light, and short. The SLK sat 2 and came with rear-wheel drive and a power-folding hardtop that raised or lowered in about 20 seconds.

The SLK competed with German rivals that included the Audi TT, BMW Z4, and Porsche Boxster.

The base engine in the SLK250 was a turbocharged 1.8-liter 4-cylinder that made 201 horsepower. The SLK350 featured a 302-horsepower 3.5-liter V6, and the SL55 AMG was motivated by a 415-horsepower 5.5-liter V8. The SLK250 was offered with a 6-speed manual transmission or a 7-speed automatic with manual shift capability. The SLK350 and SLK55 AMG both used the 7-speed automatic.

The 2012 Mercedes-Benz SLK came standard with the usual suite of government-mandated safety features, plus side airbags, knee airbags, brake assist, automatic pop-up roll bars, active head restraints, and Mercedes Attention Assist, which monitored drivers and warned them if it sensed they had become drowsy.

The base engine in the SLK250 was a turbocharged 1.8-liter 4-cylinder rated at 201 horsepower. The SLK350 featured a 302-horsepower 3.5-liter V6, and the SL55 AMG was motivated by a 415-horsepower 5.5-liter V8. The SLK250 was offered with a 6-speed manual transmission or a 7-speed automatic with manual shift capability. The SLK350 and SLK55 AMG both were only available with the 7-speed automatic.

Mercedes has made only SLK350 models available for testing. While the 3.5-liter V6 doesn’t knock you back into your seat, its strong, smooth power builds in linear fashion. Mercedes-Benz quotes a 0-60 mph time of 5.4 seconds, and that seems realistic to us. The automatic transmission is generally responsive, but it can dither between gears, and it isn’t as lightning quick as the dual-clutch automated manuals offered by the competition. Shifting manually via the steering-wheel paddles helps, but the shifts still aren’t that quick.

Though a sports car, the SLK offers a fairly smooth ride. The short wheelbase does make sharp bumps quite disruptive, which can become taxing on long stretches of broken pavement.

The SLK strikes a better balance between ride comfort and handling prowess than most competitors. It carves through corners with excellent grip and minimal body roll. The steering’s substantial feel at speed is marred by slow, clunky response when maneuvering in tight quarters. The brakes offer excellent pedal feel and strong stopping power.

Buyers will find the SLK350’s raspy exhaust note either exhilarating or tiring. The sound is far from unrefined, but it’s a constant companion that might turn off some Mercedes-Benz traditionalists. A bit of excess wind rush in the cabin means raised voices are necessary to carry on a conversation at speeds greater than 60 mph. An available wind deflector helps, but not entirely.

Most SLKs are equipped with the brand’s COMAND system to handle audio, climate, and navigation functions. The system takes some time to get used to, but most of the controls become second nature after a month or two. That said, we would like the screen to be slightly larger and offer touch functionality.

The interior materials are of the highest quality with a solid fit-and-finish. The plastic that surrounds the center console and control interface has a satin veneer and looks like metal. Even the footwells have soft-touch surfaces, with aids comfort for folks who may rest their knees there.

Top-up headroom is plentiful, and the seats have enough travel to accommodate all but the longest of leg. Mercedes offers more features for cool-weather driving than hot. Ventilated seats are not offered, but Mercedes’ AIRSCARF feature blows warm air across occupants’ necks, making top-down driving on chilly days more palatable. With the top up, visibility is better than in most convertibles. However, a small rearview mirror and tall deck hurt the view directly behind the car. The SLK rides low and has long doors, so entry and exit can be a challenge for older folks and in tight spaces.

SLK-Class has no rear seating.

The SLK has 10.1 cubic feet of trunk space with the top up. That’s enough for a couple golf bags or carry-on suitcases, but not much more than that. Volume shrinks to 6.4 cubic feet with the top down, limiting the SLK’s long-trip usefulness. In-cabin storage is also limited. The center console is shallow, the door pockets are tiny, and Mercedes provides a couple cubbies behind the seats, but they’re small.