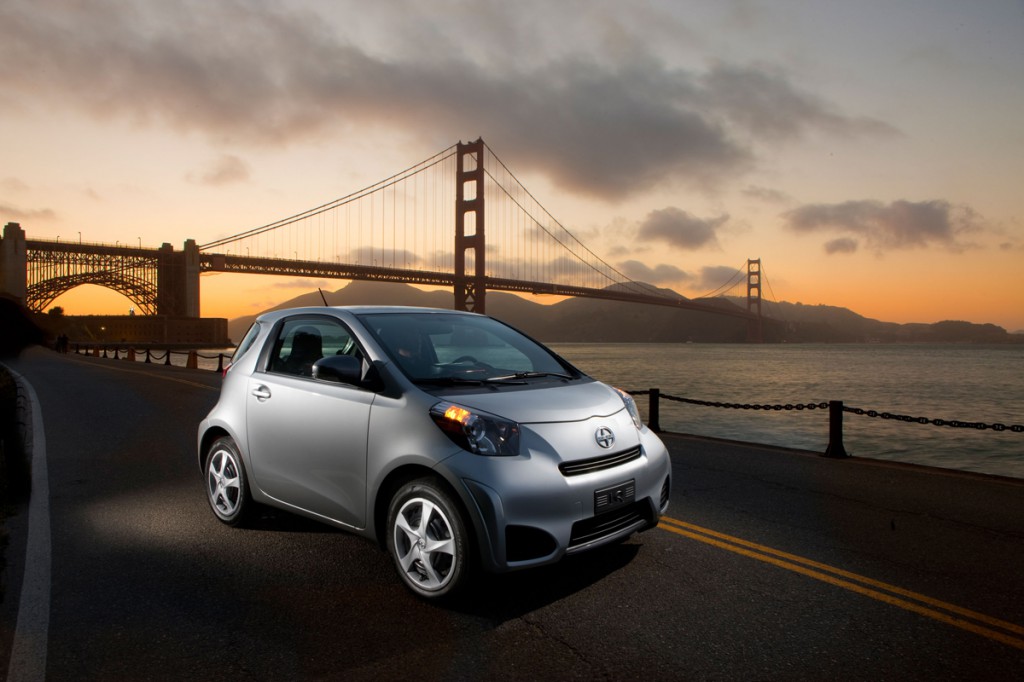 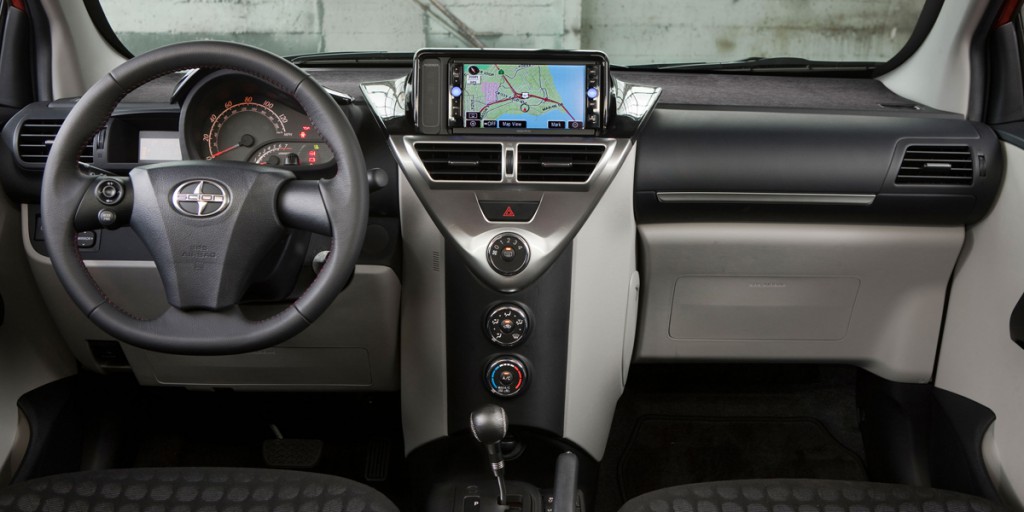 This Scion aims at trendy young urban types as a funky runabout that’s easy on gas, fits in places other cars won’t, and is decent fun to drive. But it’s really just basic transportation with a designer sheen, clearly patterned on the ForTwo Smart in both name and concept. And though roomier and more practical than the Smart, as well as usefully quicker and more mechanically polished, the iQ costs more than many other subcompacts that offer four doors and four adult-size seats, not to mention a smoother, quieter ride. In all, the Scion iQ is a fine exercise in space-efficiency, but it’s neither good value nor a brainy small-car choice except for those who can live with the compromises of its minimalist design.

Toyota’s youth-oriented Scion line added this petite “3+1” 2-door hatchback for 2012, a year later than originally planned. Introduced to major world markets during 2010, the iQ was sold as a Toyota outside North America. It was also the basis for the improbable Aston Martin Cygnet, a restyled ultra-luxury version that helped the famed British make offset the high fuel thirst and emissions of its mainstay large, heavy grand touring cars for compliance with various regulations.

The Scion iQ was one of the smallest cars on the American market. Its closest rival in size and concept was the 2-passenger Smart ForTwo, although the iQ was somewhat longer, lower, and wider.

The “3+1” description referred to a cabin designed for two adults in front, a third grownup behind on the right side, and a child behind the driver. This reflected the iQ’s mission as a minimalist, max-mpg runabout for cities like Tokyo, Paris, and, yes, The Big Apple, where traffic is dense and parking both frustrating and expensive. Because development focused on providing nominal 4-passenger seating within the smallest possible footprint, the iQ incorporated a number of space-saving features and specific components shared with no other Toyota Motor Company product.

Despite its carefully calculated design, this “premium micro-subcompact,” as Toyota called it, was forced to compete on price and practicality with a host of other minicars. Among them the rear-engine ForTwo, of course, as well as the front-wheel-drive Fiat 500, the only other 2-door designs in this class. Other alternatives included larger 4-door models such as the Chevrolet Spark, Mazda 2, and Toyota’s own Yaris.

Factory options were limited to a sport suspension and special paint, but buyers could choose from a number of approved dealer-installed accessories, some of which carried the Toyota Racing Development (TRD) brand. These included larger alloy wheels, fog lights, a rear roof spoiler and other sporty exterior add-ons, a TRD “performance” suspension, interior dress-up items, satellite radio, various name-brand audio systems, and a navigation system with DVD and iPod video playback.

The Scion iQ offered a single powertrain. This used a 94-horsepower, 1.3-liter 4-cylinder engine to drive the front wheels through a gear-less, continuously variable transmission (CVT) that functioned somewhat like a conventional automatic. The transmission had three settings: Drive, S, and B. S, or Sport, altered powertrain responses to suit more-spirited driving. B, for Braking, kept the engine and CVT in a rev range that enhanced the “engine braking” effect, which can prove useful for long descents.

EPA-rated fuel economy was an estimated 36 mpg in city driving and 37 mpg on the highway. Only regular-grade gas was required.

The iQ included a standard complement of expected and federally required safety features, including antilock brakes (ABS), an antiskid system, and traction control. Because of its small size, the iQ was also equipped with no fewer than 11 airbags as “passive safety” pluses. These included the familiar curtain-side airbags and knee airbags for driver and front passenger, plus two new types. One was a rear-window curtain that dropped from the ceiling to fill the space behind back-seat passengers. The other involved front-seat airbags that inflated from the cushions to keep occupant hips from moving forward in certain types of front collisions, or so Scion said.

The Scion iQ’s only engine was a 94-horsepower, 1.3-liter 4-cylinder. It drove the front wheels through a gear-less, continuously variable transmission (CVT) that functioned somewhat like a conventional automatic. The transmission had three settings: Drive, S, and B. S, or Sport, altered powertrain responses to suit more-spirited driving. B, for Braking, kept the engine and CVT in a rev range that enhanced the “engine braking” effect, which can be useful for long descents.

The iQ does 0-60 mph in about 10 seconds. That’s OK for the urban grind, but marginal for highway passing, climbing steep hills, or merging onto fast-moving freeways, all of which demand patience and planning. The transmission does what it can to keep the engine in the strongest part of its rpm range, but it shifts with the same syrupy hesitation as most CVTs, and the S mode does little for perceived performance. On the plus side, the iQ has no trouble keeping pace with 65-70 mph highway traffic, at least on level roads.

In Consumer Guide testing, an iQ averaged 38.1 mpg in mixed driving. Only regular-grade gas is required.

The iQ rides surprisingly well for such a short, light car. The base suspension doesn’t really absorb routine bumps and cracks, but does dull their impact. Alas, comfort deteriorates sharply with the optional sport suspension and especially the TRD setup, which is even stiffer. Either way, the result is marked jiggle and thump on many surfaces, with some potholes and large bumps registering harshly enough to create unwanted body rocking and occupant “head toss.” Adding larger, dealer-installed wheels and/or lower-profile tires only makes things worse.

With its small envelope and quick, light steering, the iQ makes short work of dense urban traffic, U-turns, and close-quarters parking chores. And despite appearances, it exhibits only moderate cornering lean. Trouble is, the steering is so numb on-center and has such sharp turn-in as to demand extra concentration in normal driving. That’s especially true on bumpy surfaces and in gusty weather at highway speeds, both of which can cause this bantamweight to bobble about and feel “darty.” At least the brakes reassure by delivering drama-free stops on most surfaces, though the ABS on one test car activated briefly in a simulated panic-stop from only about 25 mph.

The iQ isn’t a buzz-box, but it’s none too refined versus most rivals, what with evidently minimal sound insulation (to minimize gas-eating weight) and noise sources being so close to occupant ears. The engine is always audible and turns thrashy near full throttle. On the highway, tire and wind noise almost drown out the mechanical ruckus, and conversation can be strained by just 65 mph. The transmission’s B mode enhances “engine braking” by maintaining higher rpm than Drive or Sport, which can annoy over long distances.

A high-style dashboard offers a large, legible speedometer and a smaller, less easily read tachometer, fuel, and temperature gauges. Climate controls involve three rotary knobs with inset switches; all stack ahead of the shift lever and are easy to reach and operate. Audio head units mount atop the center control area, a convenience plus. The base system is straightforward, but others have needlessly confusing controls. The available touchscreen navigation system is fairly easy to use, with simple icons and large text. It, too, sits top-dead center, but also controls most audio adjustments, again to the point of frequent driver distraction.

Cabin decor emphasizes trendy style over tactile substance, but most materials are nice enough for the price. Hard plastic dominates, but is nicely textured, and modest soft-touch surfacing appears on the dash top and door panels. The cloth upholstery looks a bit “industrial” but also durable, and it feels better than the fabrics used in some rival minicars. Some testers think the doors close with a tinny clang that betrays a “built to a price” agenda.

Despite its small footprint, the iQ feels spacious and airy in front. The seats are basic low-line Toyota fare, but adequately comfortable. They’re also high enough off the floor that 6-footer heads will brush the ceiling. That positioning also means taller occupants must duck to clear the door frame on entry/exit, which is otherwise easy, thanks to wide but manageable doors. Still, lower-set seats with height adjustment would be welcome. The driving position is a bit bus-like, compromised by slightly short seat tracks and a steering wheel that tilts but doesn’t telescope. The passenger seat slides more than a foot to accommodate an adult behind, so the dashboard is pushed a bit further forward on that side to make room for the front seater’s knees, one of the car’s many space-maker tricks. Visibility is slightly hampered aft by a slim rear window and thick middle roof posts.

The iQ’s limited cabin length means that two adults riding in tandem on the right side will be very cramped for leg space. Rear headroom is sparse, too, and the seat is flat and hard. The left rear seat is a token gesture, the space being intended only for small children or equally small cargo. The front-passenger seat tilts and slides for rear access via an inboard lever that’s convenient for both the driver and rear-seat passengers. Entry/exit is a duck-and-twist ordeal on the right side and nearly impossible for adults on the left.

Cargo room is almost non-existent with the rear seats up: just 3.5 cubic feet, enough for a few folded umbrellas. Folding the rear seats nets 16.7 cubic feet, which is OK for two people on a weekend getaway, but is far less than offered by most rivals, which are larger to begin with. Interior storage includes cupholders in the doors and a drawer beneath the front passenger seat that isn’t a good substitute for a dashboard glovebox, which is MIA.