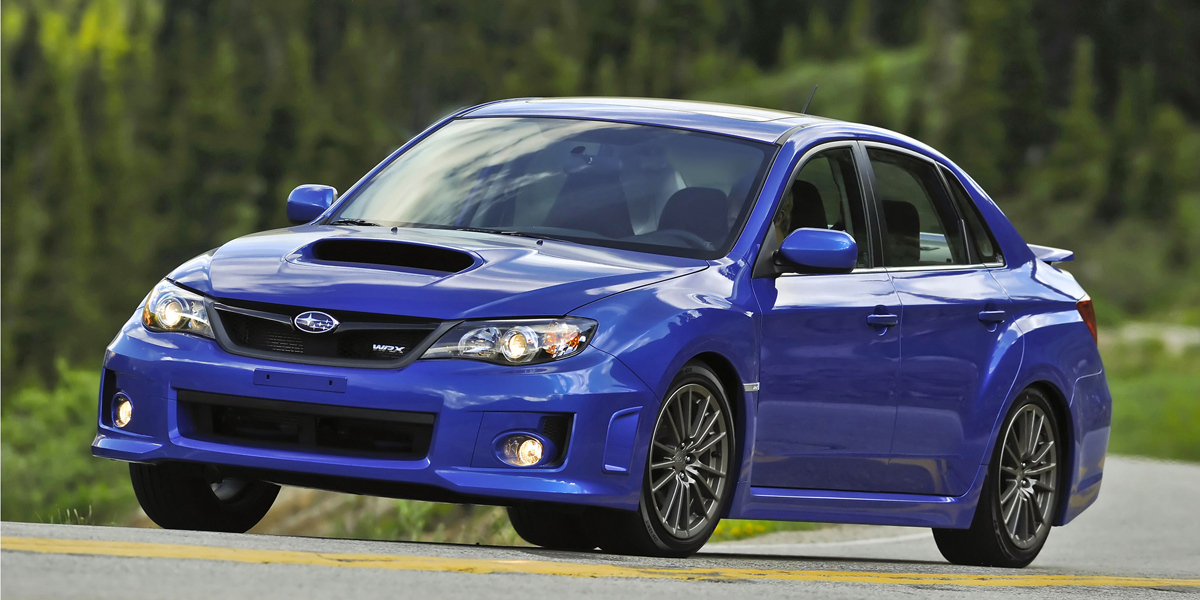 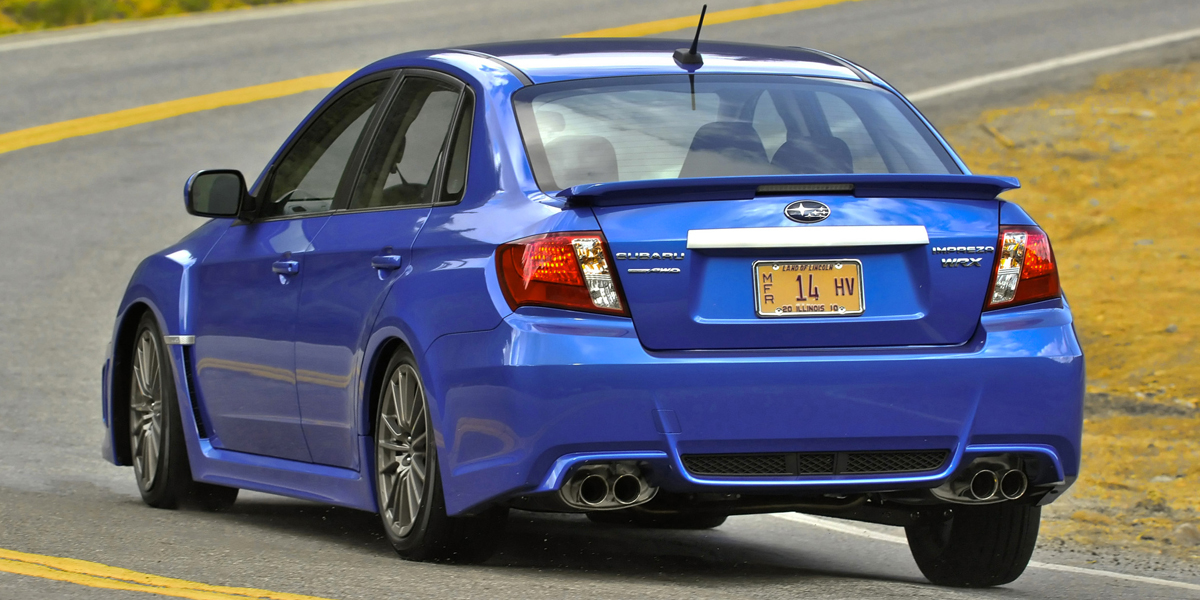 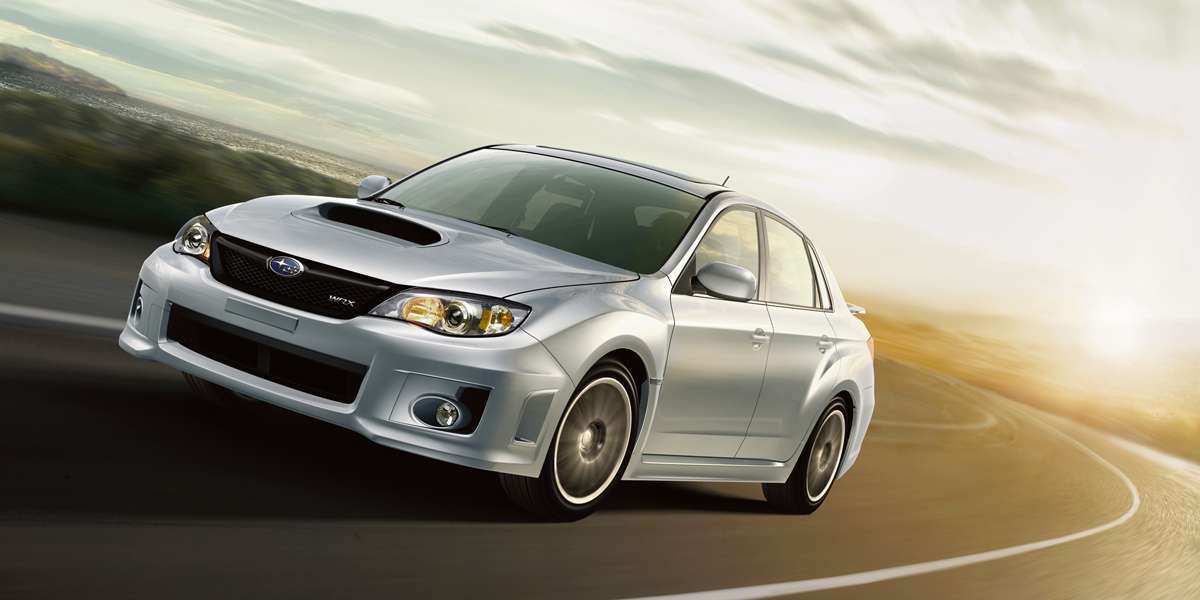 Impreza WRX is fast and handles well, and the standard all-wheel drive provides fine traction. Hatchback-style wagon versions are more practical than the sedans, though the interior suffers from increased levels of road and wind noise. Interior appearance disappoints as well. Base WRX models offer the best value, but serious enthusiasts will be drawn to the STI version and likely find it worth the extra money.

Impreza WRX was Subaru’s all-wheel-drive compact performance car. WRX was based on the Impreza that was sold from 2008-2011; it was not the same basic car as the 2012-2014 Impreza. WRX was available as a 4-door sedan and a 4-door hatchback/wagon that was sometimes called the 5-door.

The WRX Limited extras were HID low-beam headlamps and a leather-trimmed interior.

Options included a navigation system with a 6.1-inch touch screen, satellite radio, and voice activation. It was available on all WRX sedans and wagons except the base models.

The Impreza WRX engine was a 265-horsepower turbocharged 2.5-liter 4-cylinder that used Subaru’s traditional horizontally opposed “boxer” design. It paired with a 5-speed manual transmission. No automatic transmission was available.

The WRX STI packed a 305-horsepower turbocharged 2.5-liter 4-cylinder engine. The only transmission it paired to was a 6-speed manual.

All Impreza WRXs were all-wheel drive. WRX versions had a system with a viscous-coupling locking center differential. In normal driving it sent 50 percent of the power to the rear wheels and 50 percent to the fronts. If there was a loss of traction at either set of wheels, the system could send all of the available torque to the opposite set.

The Impreza WRX was powered by a 265-horsepower turbocharged and intercooled 2.5-liter 4-cylinder engine. It utilized Subaru’s traditional “boxer” design with horizontally opposed cylinders. It paired with a 5-speed manual transmission. The Impreza WRX STI also had a turbocharged and intercooled 2.5-liter 4-cylinder engine, except it was rated at 305 horsepower. The only available transmission was a 6-speed manual. An automatic transmission was not available with either engine.

With either engine, some turbo lag is present at low rpm. They’re both very strong when revving above 3,500 rpm though, particularly the STI. Opinions are mixed on the standard shifter. Some testers think it is rubbery and vague; others had no complaints. The optional short-throw shifter feels better, and it has positive shift action. We wish Subaru made it standard.

The WRX suspension has quite good bump absorption, and the car rides more comfortably than many of its competitors. STI versions are notably firmer, but unlike some factory-tuned performance cars the ride is never outright harsh.

The steering is well weighted and quite responsive. Body lean is well checked while cornering, and dry-pavement grip is excellent. STI versions are sharper still.

These turbocharged engines whine under full throttle, but they’re more relaxed at cruising speeds. The wagon body is particularly susceptible to road and wind noise.

The climate controls are within easy reach and are clearly marked. The audio system is mounted high on the center of the dashboard, and it puts some controls just out of easy reach.

Up front, six-footers have good headroom and legroom. The WRX and STI’s sport bucket seats have good side bolstering but some of our drivers wished for more lumbar support. Visibility is excellent all around.

Overall rear-seat room is decent for the class. Six-footers will fit in back, but they’ll have barely adequate legroom and knee space. Foot space is good, though. Entry and exit are fine for a compact car.

Cargo room is not a strong point in the sedans. In those models, the floor rises over the rear axle, and standard sickle-type lid hinges dig deep into the load area. The hatchback-style wagons are versatile little haulers with good space behind the rear seats. The rear seat backs fold nearly flat with the cargo floor, but the headrests may have to be removed if the front seats are set far back. Interior storage is poor with a small center console and just average glovebox and door map pockets.