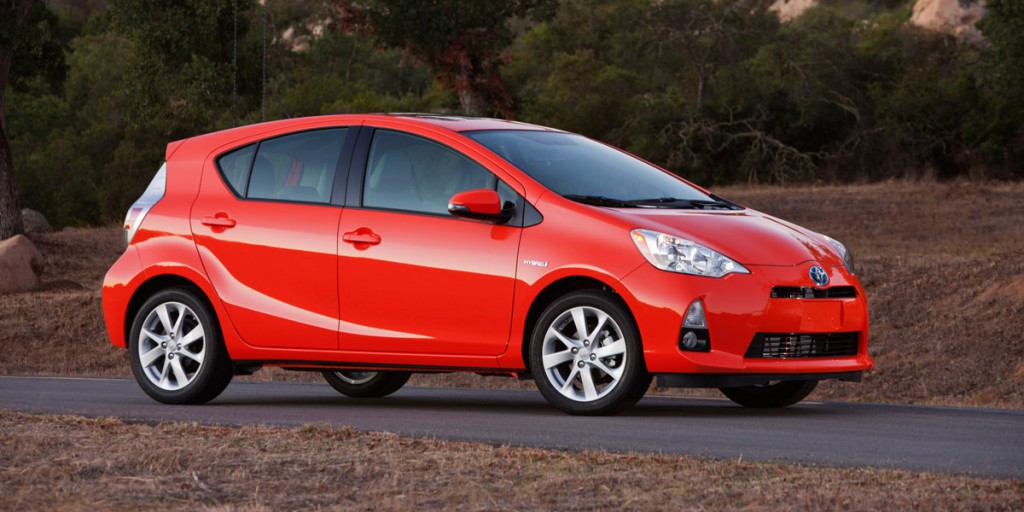 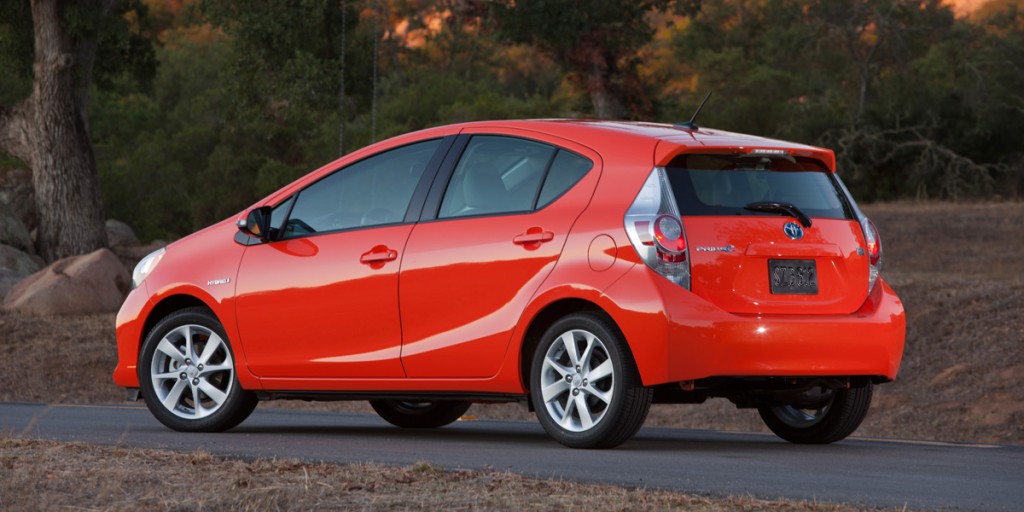 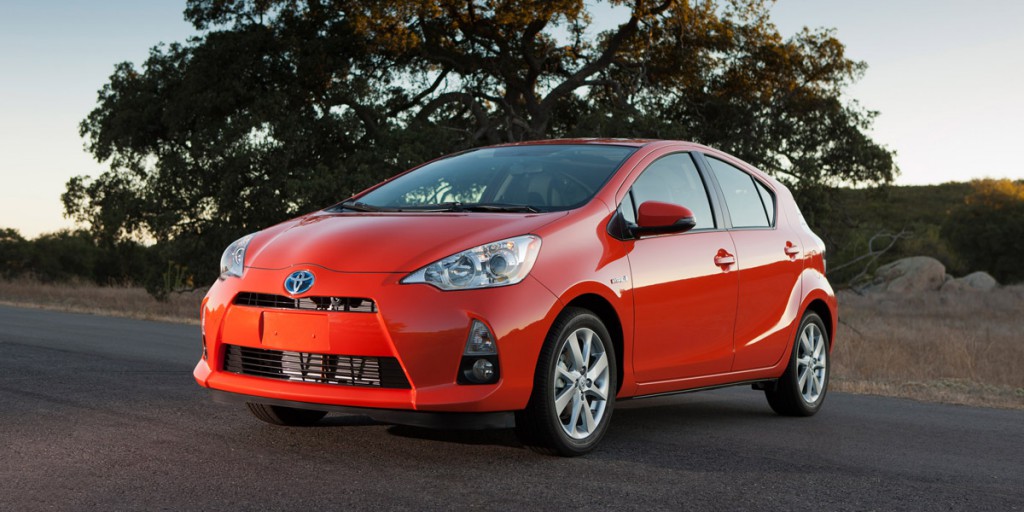 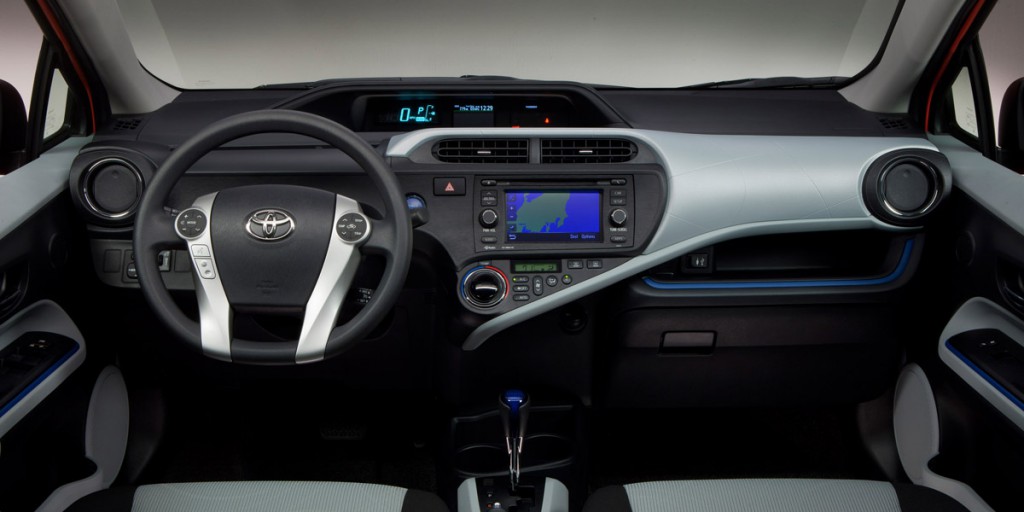 The Prius c might be short on acceleration and quietness, but it’s big on fuel economy. Very big, actually, as it recorded some of the highest fuel economy numbers we’ve ever seen. Toss in decent versatility, passenger room, and a price tag that rivals many non-hybrid small cars, and you have an ideal choice for those who place a high value on frugality in all forms.

Prius c was the smallest member of Toyota’s gas/electric hybrid “family,” which consists of this car, a subcompact 4-door hatchback, the standard Prius hatchback with whom you’re probably most familiar, and the larger Prius v wagon.

Like all other Prii (the official plural of Prius), the c was made in Japan. Competitors can include the conventional Chevrolet Sonic, Honda Fit, and Kia Rio. We also suggest cross-shopping the slightly larger, but similarly priced, Honda Insight hybrid.

The Prius c was equipped with a 73-horsepower 1.5-liter 4-cylinder engine paired with electric motors for a combined 99 horsepower. The only transmission was a CVT that behaved much like an automatic. Like all Toyota hybrids, the front-wheel-drive Prius c could run on one or both of its power sources to balance acceleration and fuel economy.

Prius c came with all the expected safety features plus a driver knee airbag.

The front-wheel-drive Prius c offers just one drivetrain. It’s a 73-horsepower 1.5-liter gasoline 4-cylinder engine that pairs with a 26-horsepower battery-powered electric motor. Like all Toyota hybrids, the Prius c can run on one or both of its engines. The standard transmission is a continuously variable unit (CVT) that behaves like an automatic.

With a grand total of 99 horsepower, Prius c is not going to win any stoplight grand prix. It’s fairly slow going from a stop and when you need to merge onto the highway. The one bright spot is the car’s mid-range throttle response. This is where the near-instantaneous torque from the electric motor and continuously variable transmission are particularly helpful. Toyota says the Prius c will do 0-60 mph in 11.5 seconds. That’s hardly fast, but our seat-of-the-pants impression is that the car feels a bit more sprightly. Transitions between electric and gasoline power are virtually seamless.

All Prius c models include 15-inch wheels. So equipped, the car absorbs small bumps well, but larger ones can occasionally pound through the cabin. The Four is available with 16-inch wheels, and when going this route, you get slightly firmer suspension tuning. This combination messes up the ride a bit, allowing even more bumps to intrude. Try before you buy.

Handling is more than competent on standard models. The standard 15-inch tires are skinny and biased toward maximum fuel economy rather than racetrack-ready grip. The Four’s optional 16s are better in this regard but ultimately not worth the penalty to the ride quality.

Prius c runs with the subcompact pack when it comes to noise isolation. The gas motor is a bit loud during full-throttle acceleration, but it’s not tinny or unrefined. Road and wind noise are present but not overly problematic.

The c retains the unconventional dashboard layout of the larger Prius and Prius v. The main gauges reside atop the center of the dashboard. Most drivers will acclimate quickly enough. The audio system in the One and Two is a fairly standard layout that’s easy to use. A navigation system with Toyota’s Entune infotainment is standard on the Three and Four. This setup absorbs most audio functions, but its virtual on-screen buttons are large and clearly marked.

Hard plastic dominates, but kudos to Toyota for adding a few soft-touch panels to the interior. The upholstery on the seats gets progressively nicer looking as you ascend through the model range.

Prius c has low-set front seats. They are adjustable for height on all but the One. Regardless, only the very tall might find headroom lacking. Forward visibility is very good, but the view out back is pinched by thick roof pillars and head rests.

Rear-seat space is excellent for a subcompact car. Headroom is more than adequate for adults up to 6 feet. Legroom is surprisingly good, only really cramped if the front seats are set far back. Entry and exit are quite easy.

Prius c offers hatchback versatility, but there’s not much space behind the raised rear seat backs. The area is narrow and not especially tall. The One model has a one-piece folding seat back while those in the Two, Three, and Four are split 60/40. When folded, the backs rest slightly above the cargo floor, but it’s not enough to interfere with loading larger items. Cabin storage consists of many small cubbies.