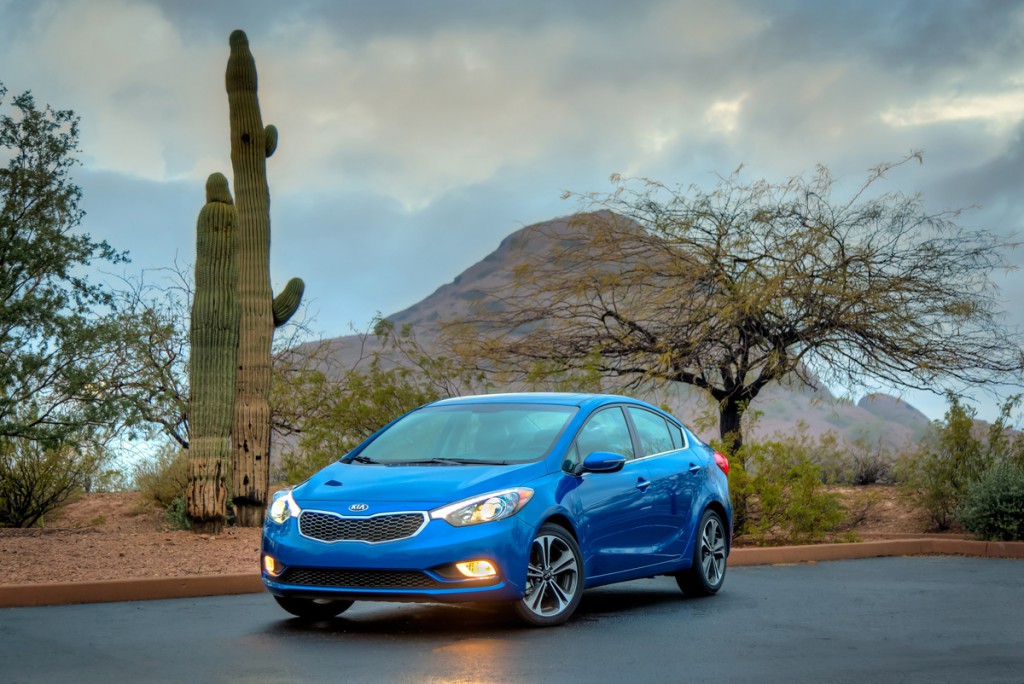 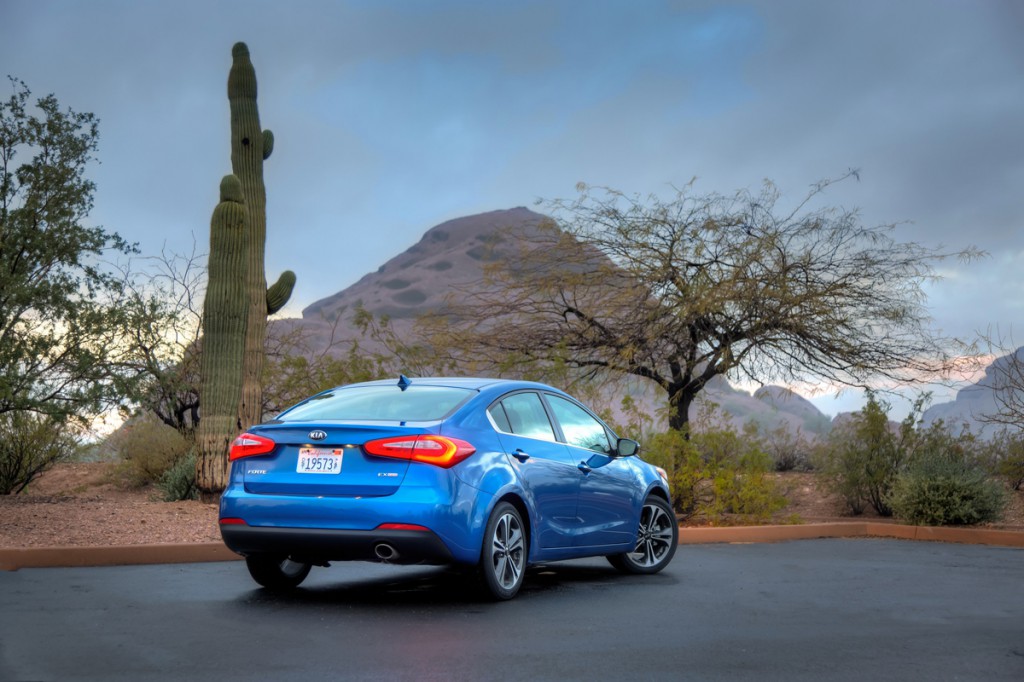 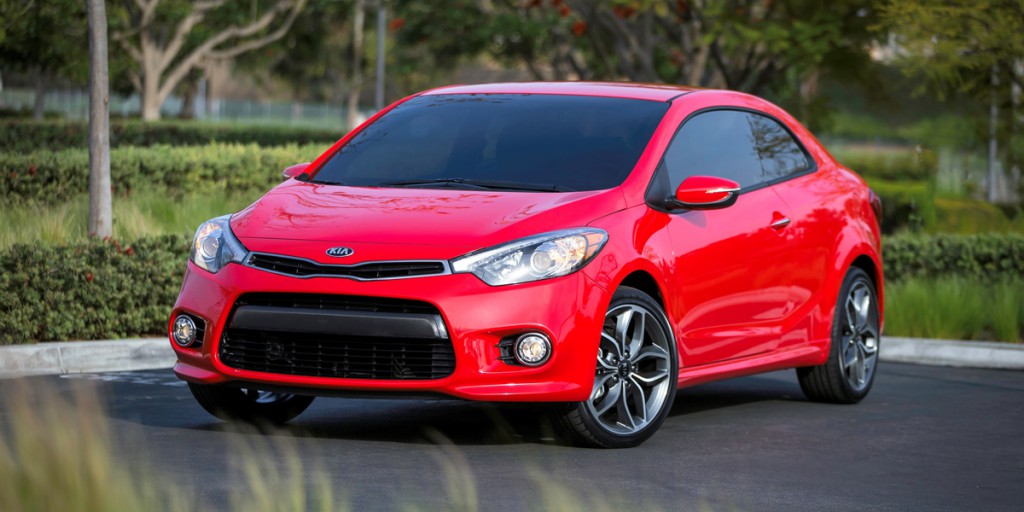 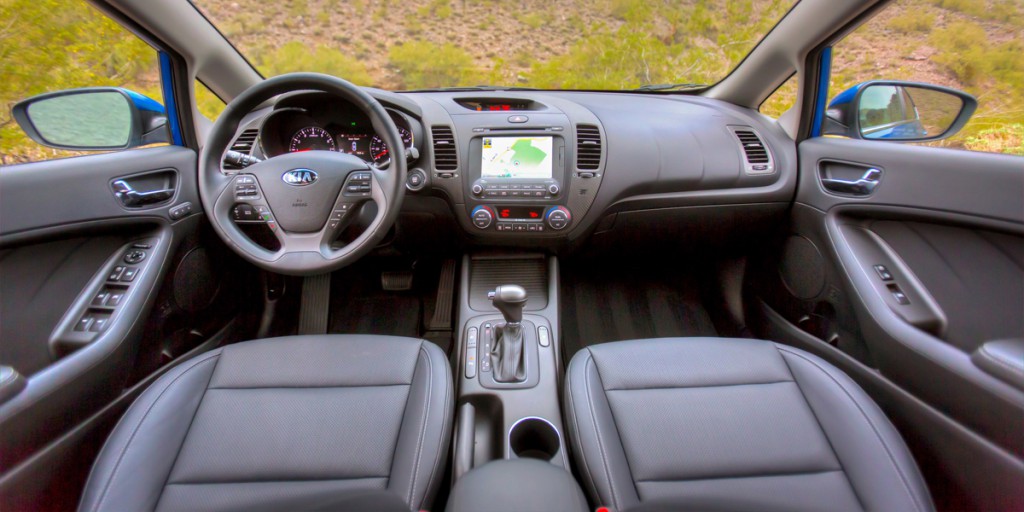 When I was growing up, no self-respecting car guy would ever be caught dead driving a 4-door. That general attitude has changed now, and so has mine; Forte’s 4-door hatchback version would now be my preference. But for anyone drawn to the sporty demeanor of a 2-door, Kia has clearly scored a major coup with the Koup.

This compact slotted between Kia’s subcompact Rio and midsize Optima sedans and shared some engineering DNA with the Elantra at corporate parent Hyundai. Kia offered a 4-door sedan, 4-door hatchback, and a derivative 2-door coupe: the Forte Koup.

Prime competitors included comparable Ford Focus, Honda Civic, and Mazda 3. Other alternatives included the Chevrolet Cruze, Dodge Dart, Nissan Sentra, and Toyota Corolla, all of which were offered only as sedans. Of course, the related Hyundai Elantra is another option.

Forte was front-wheel drive with a choice of three, 4-cylinder engines. The LX got a 1.8-liter unit with multipoint fuel injection and 148 horsepower. The EX ran a 2.0-liter unit with direct fuel injection and 173 horsepower. The SX got a 201-hp turbocharged 1.6-liter. A choice of a 6-speed manual transmission and optional 6-speed automatic were offered. Forte’s automatic included a manual-shift gate and an Eco mode, which changed throttle response and transmission shift points to encourage more-economical driving.

The 2014 Kia Forte came with expected and federally mandated safety features, starting with antilock brakes, stability system, and traction control. Seat-mounted front side airbags were also standard, along with curtain side airbags. Rear side airbags were not offered. Safety-related standard features included rearview camera and Kia’s Hill-start Assist Control, which prevented the vehicle from rolling backward when starting up from rest on a steep grade.

Forte was front-wheel drive with a choice of three, 4-cylinder engines. The LX got a 1.8-liter unit with multipoint fuel injection and 148 horsepower. The EX ran a 2.0-liter unit with direct fuel injection and 173 horsepower. The SX got a 201-hp turbocharged 1.6-liter. A choice of a 6-speed manual transmission and optional 6-speed automatic were offered.

CG tested the “sportier” top-line SX Koup, which comes with a 201-horsepower turbocharged 1.6-liter 4-cylinder engine and the choice of a 6-speed manual or 6-speed automatic transmission. (The base EX has a 173-horsepower 2.0-liter naturally aspirated four.) Like a number of the small turbo fours this driver has sampled this year, the Forte Koup’s powerplant does a good job of handling the “turbo lag” that seemed to be a hallmark of that type of induction. While this Kia is not exactly a “bomb,” it accelerates from a stop in a lively and linear fashion, and maintains torque well enough to spare drivers of manual-shift cars from repetitive-motion injuries from frequent downshifting. The 6-speed stickshift in our test car was fairly direct; precise enough; and paired with a balanced, easy-to-modulate clutch that made the car a cinch to drive in traffic and added to its fun-to-drive quotient.

In this driver’s experience, gas mileage was about on the nose of the official EPA figures of 22 mpg city/29 mpg highway/25 mpg combined. In a trip of 158.6 miles, 70 percent under city driving conditions, I averaged 23.97 mpg.

The SX has a “sport-tuned” version of the front-strut/rear-beam suspension. Bump-tuned might be a little more accurate. Pavement imperfections registered with thumps heard and felt that just made the car seem more stiff than sporty.

Sharp steering and agile handling make up for the firm ride. Most impressive here is the car’s frisky turn-in on corners; it wants to dive for the apex rather than heading off into the weeds. Only a few other cars I’ve driven have given that sensation (the Mini Cooper being among them), and it really adds to the Koup’s “fun to drive” quotient.

Something else I enjoyed was the interior ambiance. While the look is hardly ritzy, there’s some padding on the dash and – more importantly to me – on the door tops where my elbow rests. There’s a lot of smooth hard plastic on the instrument panel but it has a faux carbon-fiber look for some visual interest.

The easy-to-use audio system uses mode-selector buttons and a rotating tuner knob to get where you want to go. A finger press on the touchscreen saves presets. Climate controls are a similarly uncomplicated mix of clearly marked push buttons and twist knobs. Gauges and vehicle-information display are clear and well-placed.

Front occupants should find good head and leg room, but the Koup’s pleasant surprise is decent rear-seat space for two adults—and they won’t need to slither and strain to get back there, either. The front seats track forward to permit relatively graceful entry and exit to the back seat. (There’s room across for 3 in back, but the middle position lacks the head room of the outboard seats.) Large-for-a-coupe rear-quarter windows keep backseat passengers from feeling claustrophobic, and add to overall visibility.

The Koup’s cargo area is really quite roomy – but the folded rear seat backs rest a good 5 inches above the level of the cargo floor (which makes it hard to slide bulky cargo forward), and after the latches are released from the trunk area, the seat backs don’t drop without a push.

We have not yet tested the Forte sedan or hatchback.