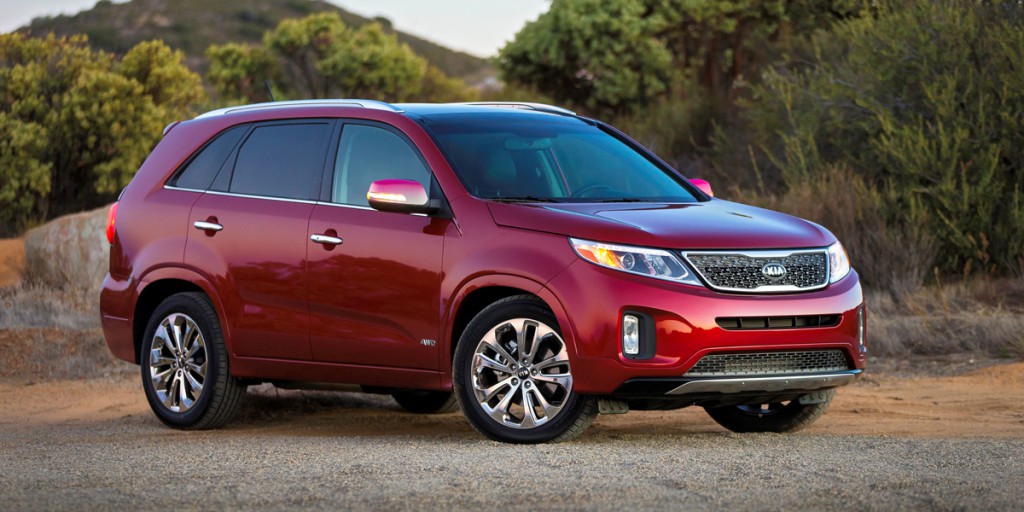 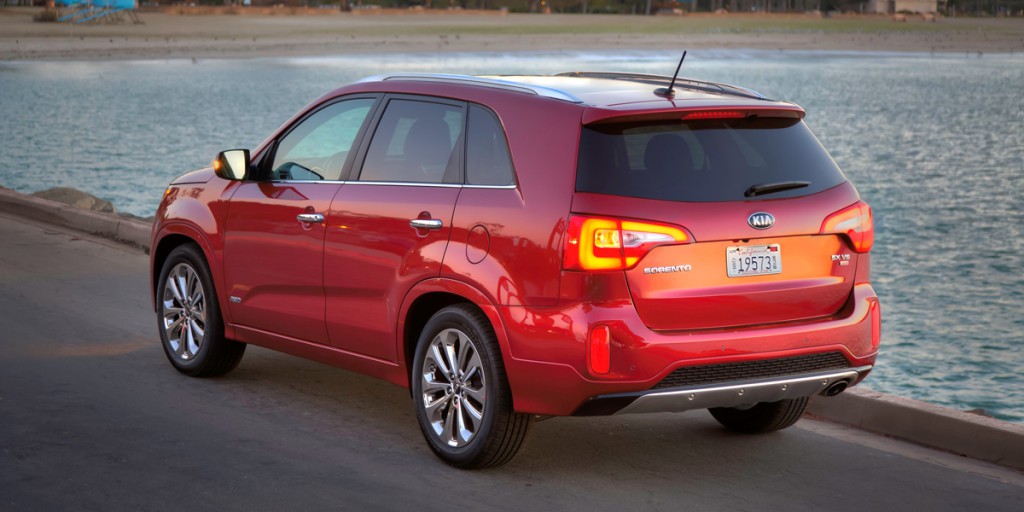 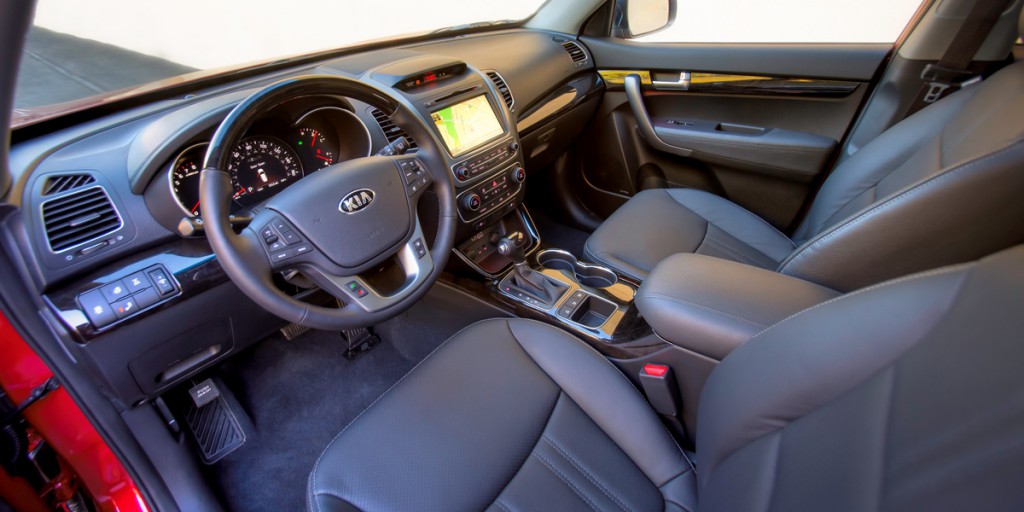 Sorento was already an appealing midsize SUV, and the 2014 seems even more so: quieter, a bit peppier, no less economical, and much nicer inside. Just as nice, existing assets remain intact, including a strong warranty, many available upscale features, capable road manners, and good all-round utility. The cramped, hard-to-reach 3rd-row seat still disappoints, but you can say the same for most like-equipped rivals. More than ever, then, the Sorento merits serious consideration if you’re looking for a capable, high-value midsize crossover.

The Sorento was Kia’s top-seller in the U.S. It was also built in the U.S. According to calendar-2012 figures from trade weekly Automotive News, the Sorento outsold not only the related Hyundai Santa Fe but class rivals Dodge Journey, Honda Pilot, and Nissan Murano. Equally impressive, it finished only a few thousand units behind the ever-popular Toyota Highlander.

All of these remained major foes for the redesigned 2014 Sorento. The redesign also aimed to woo customers away from the class sales leaders, the Chevrolet Equinox and Ford Explorer.

Kia boasted that 80 percent of the parts in the 2014 Sorento were either new or modified from the 2011-2013 design. Changes began with what is claimed to have been an all-new platform with a beefier front subframe, an added engine-bay brace, and greater use of lightweight high-strength steel. The result of all this was a quoted 18-percent improvement in torsional rigidity (resistance to twisting). Other technical updates included slightly wider wheels, larger front brakes, a revised suspension with a nearly 0.4-inch lower ride height, and a switch from hydraulic steering assist to an electromechanical system with newly available FlexSteer, which allowed drivers to vary steering effort through Comfort, Normal, and Sport modes. Kia’s first blind-spot detection system was here as well. As before, this SUV offered seating for 5 or 7 passengers.

Sorento’s available AWD added a standard locking center differential and a rear-axle torque-vectoring feature; the latter was said to aid cornering stability in certain situations. All models, whether front-drive or AWD, came with what Kia called Hill-Start Assist Control, which prevented the vehicle from rolling backward when starting up a steep grade.

In another 2014 change, Kia dropped Sorento’s previous base engine, a 175-horsepower 2.4-liter 4-cylinder with multipoint fuel injection. The base LX model thus graduated to the previously optional 191-horsepower version with Gasoline Direct Injection, which Kia badged as GDI. In addition, Sorento’s 276-horsepower 3.5-liter V6 was replaced by a 290-horsepower 3.3-liter unit, also with GDI. As before, a 6-speed automatic was the only transmission offered.

The Kia Sorento had a standard complement of expected and federally mandated safety features including antilock brakes (ABS), stability system, traction control, front side airbags, and curtain side airbags with rollover deployment sensors covering the 1st and 2nd seating rows. The standard hill-ascent control and available rearview camera, rear-obstacle detection, and blind-spot monitor can be regarded as worthy safety-related features.

Two engines were offered. A 2.4-liter 4-cylinder with Gasoline Direct Injection (GDI) developed 191-horsepower. A 290-horsepower 3.3-liter V6, also had GDI. As before, a 6-speed automatic was the only transmission offered. Front-wheel drive was standard and all-wheel drive was optional on all models.

No 4-cylinder models were available for our preview drive. The V6-equipped AWD EX has a responsive new 290-horsepower engine that gets away nicely from a stop in city driving, cruises easily on the highway, and delivers fine expressway passing capability with prompt kickdown from the 6-speed automatic transmission. However, it struggled a bit going up long grades at altitude with just two people aboard, and acceleration is bound to suffer with a sizeable load.

A 105.5-mile turn in V6 Sorento (with 69 percent of miles under city conditions) resulted in a middling 16.74 mpg—and that with just the driver and no cargo load aboard. Both engines require regular-grade gas.

The 2014 Kia Sorento exhibits a firm but comfortably compliant ride, with good resistance to fore/aft pitching over undulations and little thumping or thudding over sharp bumps, potholes, and the like. A very stout-feeling structure, even with the available panoramic sunroof, enhances the good-ride vibe.

Sorento is pleasant to drive and most always feels stable and well-planted. Even so, its cornering behavior is only on par with most class rivals, so slowing is advisable for sharp turns, as in most SUVs. We also noticed mild highway wander in gusty crosswinds. The new electric-assist steering is precise and responsive, but lacking in road feel versus the previous hydraulic system. The new variable-effort FlexSteer feature does nothing to help matters; it only makes for an over-light feel in Comfort mode and a slightly too-heavy feel in Sport. The default Normal setting offers the best compromise, and we suspect most drivers will simply leave it there. Stopping power seemed well up to the V6 engine’s performance on our test route, and pedal action was smooth and linear.

Sorento’s redesign includes suspension changes and sound-proofing measures that help elevate this SUV’s refinement from class-average to slightly above par. Coarse-pavement tire thrum is always the most audible noise source, but only because the V6 is so quiet except near maximum rpm. Wind rush is modest too, at least by SUV standards.

The 2014 Kia Sorento’s new-design dashboard is attractive and refreshingly logical. Gauges and most minor controls are large, handy, legible, and exactly where you expect them to be. We didn’t experiment much with our EX model’s navigation system, but it seemed just as user-friendly as Sorento’s previous setup. The high-mount center-dash touchscreen is sharp and clear except in strong light. Equally nice, it doesn’t control any climate functions, which are left to a pair of dials and a few buttons. Major audio controls are also separate, and we applaud Kia’s use of good old knobs for audio volume and radio tuning.

Sorento’s makeover brings a visible upgrade in cabin quality, with more-extensive use of soft-touch surfacing and higher-grade plastics than in previous models. The overall effect is attractive and modern, but not quite premium-brand rich, even with the available leather upholstery.

Front headroom and legroom are about the same as before, and still more than adequate for most adults. However, some long-legged drivers may wish for more rearward seat travel, and the available panoramic sunroof eats into head clearance for 6-footers. The seats themselves don’t look special, but seem all-day comfortable. Drivers sit tall in the saddle, as in most SUVs, but thick rear roof pillars and a slightly undersized liftgate window restrict visibility dead-astern and over-the-shoulder.

Despite an unchanged wheelbase, the 2014 Sorento offers a bit more 2nd-row legroom, knee clearance, and under-seat foot space than previous models, though not enough to make this an exceptionally roomy midsize SUV. In fact, the seats behind may be cramped for adults unless row-1 riders are slight of stature and can move forward. And there’s still insufficient seat width for uncrowded three-adult travel. Headroom remains fine, though. Rear doors are narrow at the bottom, so entry and exit isn’t easy. The 3rd-row seat is little more than a token gesture that even some kids might object to, being rather skimpy and hard, as well as difficult to access. Adults would have to sit in an extreme knees-up position.