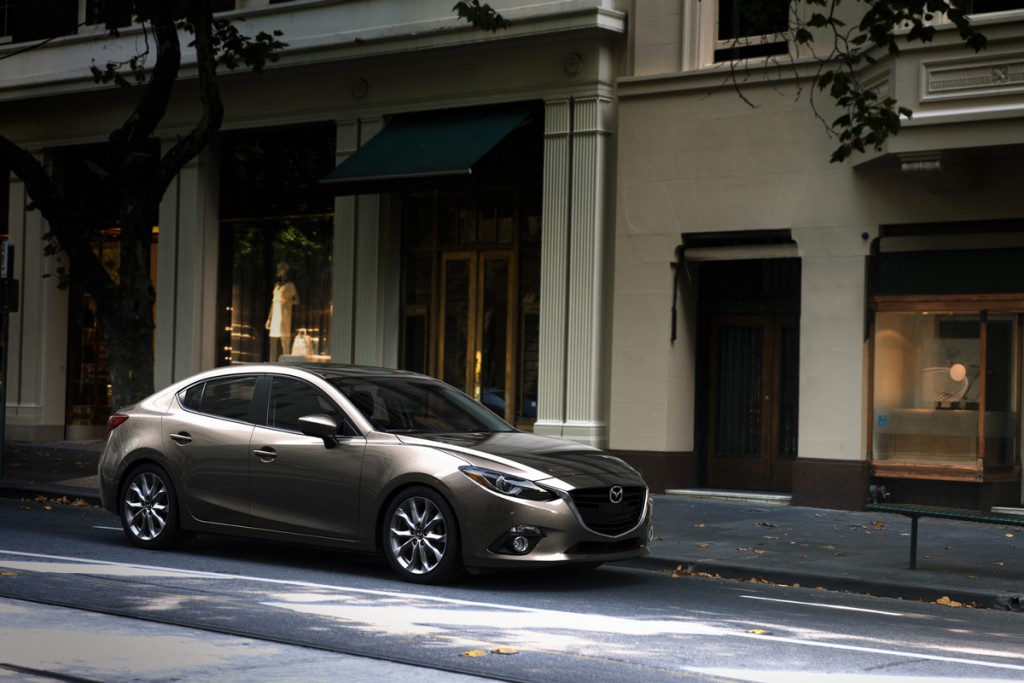 The 2014 Mazda 3 brings a more-sophisticated platform, nicer interior materials, better fuel economy, and new technology features while maintaining the sporty, fun-to-drive personality that made the previous 3 a standout in its class.

The 2014 Mazda 3 was new from the ground up and was the third vehicle to offer the company’s full suite of “SKYACTIV” technologies. SKYACTIV was Mazda’s way of improving fuel economy without sacrificing driving enjoyment through the use of a strong, light-weight body and more efficient engines and transmissions. Mazda’s other two 2014-model SKYACTIV vehicles were the CX-5 compact SUV and 6 midsize sedan. The latter was also all new for 2014.

The 3 competed toe-to-toe with the likes of the Chevrolet Cruze, Dodge Dart, Ford Focus, Honda Civic Sedan, Kia Forte, Nissan Versa, and Toyota Corolla. Like the Mazda, the Focus, Forte, and Versa offered buyers the choice of hatchback and sedan body styles. Kia’s hatchback was called the Forte 5-Door while Nissan’s was dubbed Versa Note.

Four-door hatchback and sedan Mazda 3 models were offered in base 2.0-liter i and top-line 2.5-liter s configurations, each divided into several variants. Sedans in ascending order were: i SV, i Sport, i Touring, i Grand Touring, s Touring, and s Grand Touring. Hatchbacks didn’t come in the lowest-priced i SV trim, but otherwise mirrored the sedan offerings

The optional Technology Package for s Grand Touring models included Mazda’s “Intelligent Energy Loop” (i-ELOOP) system, which used capacitors to power the car’s electrical systems. The capacitors store energy, which was generated when the car decelerates and brakes. It was designed to provide a fuel economy boost by reducing drag generated by the alternator.

In addition to the usual list of safety features, the 2014 Mazda 3 was available with blind-spot alert, lane-departure warning, and forward-collision alert. Also offered was Mazda’s “Smart City Brake Support” which used sensors and activated the brakes at speeds up to 19 mph to avoid or reduce the severity of an imminent collision.

Mazda 3 i models with the 2.0-liter engine have good low-end grunt, and enough power for worry-free highway merges. Some testers were disappointed with the lazy low-speed throttle response though. The 6-speed manual transmission has nicely spaced gear ratios and a cooperative clutch and shifter. The 2.5-liter engine in s models is smooth and eager.

In Consumer Guide testing, an i hatchback with the 6-speed manual transmission returned 30.1 mpg in mixed driving. An i sedan with automatic scored 32.0 mpg in driving that was about 2-to-1 city. An s hatchback returned 24.9 mpg in mostly city driving. All Mazda 3 models used regular-grade gas.

Mazda 3 rides firmly, but there’s enough damping to absorb most bumps and jolts.

Handling is on the sporty side. Chassis dynamics are among the best in the class, and any 3 has quick moves and decent grip. Steering is accurate and nicely weighted. Braking power is prompt and predictable.

In hatchbacks, road noise is a constant companion.

There’s a large easy-to-read speedometer, but the bar-graph fuel gauge and tachometer are much smaller. The climate controls are mounted low on the center section of the dash, but they are easy to reach. Opinions are mixed on the audio system’s controls that combine a dash-mounted display screen and a console-mounted rotary controller that’s surrounded with a selection of push buttons. Some testers like the system, but others find it overly complicated and tricky to master.

Inside, the 2014 Mazda 3 is a bit nicer than the old model, and entirely appropriate for the class. The overall ambiance is handsome and many surfaces are lightly padded. Most versions have leather-wrapped steering wheels and shift knobs with red stitch detailing that add some visual appeal.

Headroom and legroom are good up front, but not exceptional. Those taller than 6 feet may wish for more headroom under the sunroof. Grand Touring’s front seats garner mixed reviews. Some find them comfortable and supportive, but others but others found the cushion’s bolsters too confining. Adjustable lumber support is a positive though.

In back, legroom is tight for adults, especially if the front seats are far back. Head room is on the stingy side as well.

Hatchbacks have a covered cargo hold that expands when the 60/40 split rear seat is folded down. Sedans have a nice-size trunk, and the 60/40 split seat back folds down flat to increase usable space. About the only demerit here is that the bulkhead the seat backs rest on in the sedan narrows at the bottom. Small item storage is OK. Up front, there is a nice glove box and a smallish console bin and two open cup holders. In back the center arm rest folds down to reveal two open cup holders, and there’s a pocket on one of the seat backs.