Cons: Some modern safety features are not available; side-opening tailgate may not suit all buyers

CG Says: The 2022 Ford EcoSport drops its 3-cylinder, front-wheel-drive models. All EcoSports are now all-wheel drive powered by a 4-cylinder engine. It’s believed that this is the last year for EcoSport production. Ford entered the subcompact crossover market in 2018. Although the EcoSport (pronounced “Echo Sport”) was new to the American market, Ford had sold similar versions in global markets for a number of years. The EcoSport is Ford’s smallest SUV, with an overall length that’s 17 inches shorter than the Ford Escape’s. It is unique in its class by having a side-hinged tailgate instead of the typical top-hinged liftgate. The sole engine is a 166-hp 2.0-liter 4-cylinder with fuel-saving auto stop/start that is paired with a 6-speed automatic transmission. Models ascend through base S, SE, sporty SES, and luxury Titanium; all have all-wheel-drive. SES comes standard with sport suspension. Titanium comes with leather upholstery, navigation, and premium sound system. Available technology features include Ford’s SYNC3 infotainment system, Apple CarPlay/Android Auto functionality, and connectivity features via the FordPass mobile app. Blind-spot and rear cross-traffic alert is standard, but forward collision warning/mitigation, lane-departure warning/mitigation, and adaptive cruise control are unavailable. The EcoSport is something of a “placeholder” for Ford; it’s a foreign-market vehicle pressed into service in America until Ford can field a subcompact-SUV competitor that’s been designed from the ground up for U.S. buyers. This pint-sized crossover is not without its charms, but it is missing some safety features and the side-hinged cargo door can be a liability in close quarters. 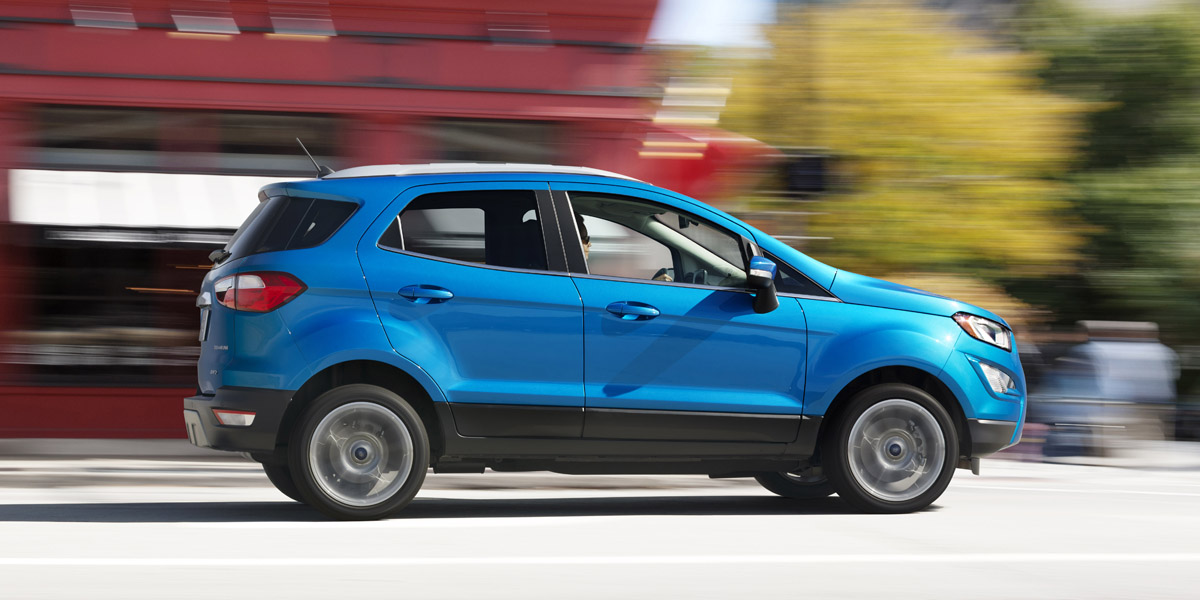