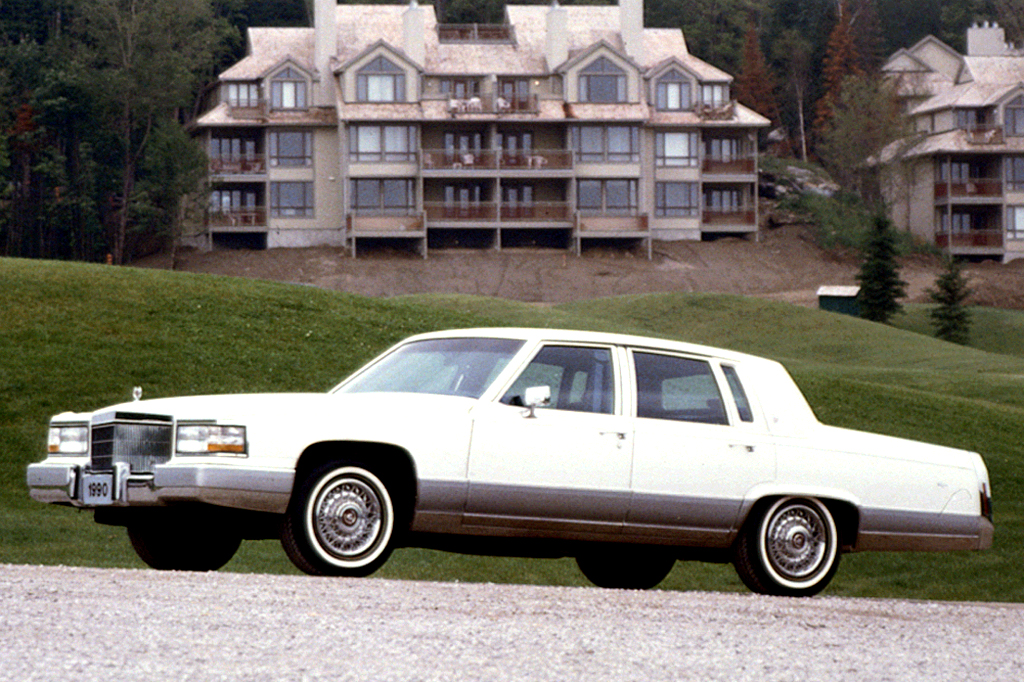 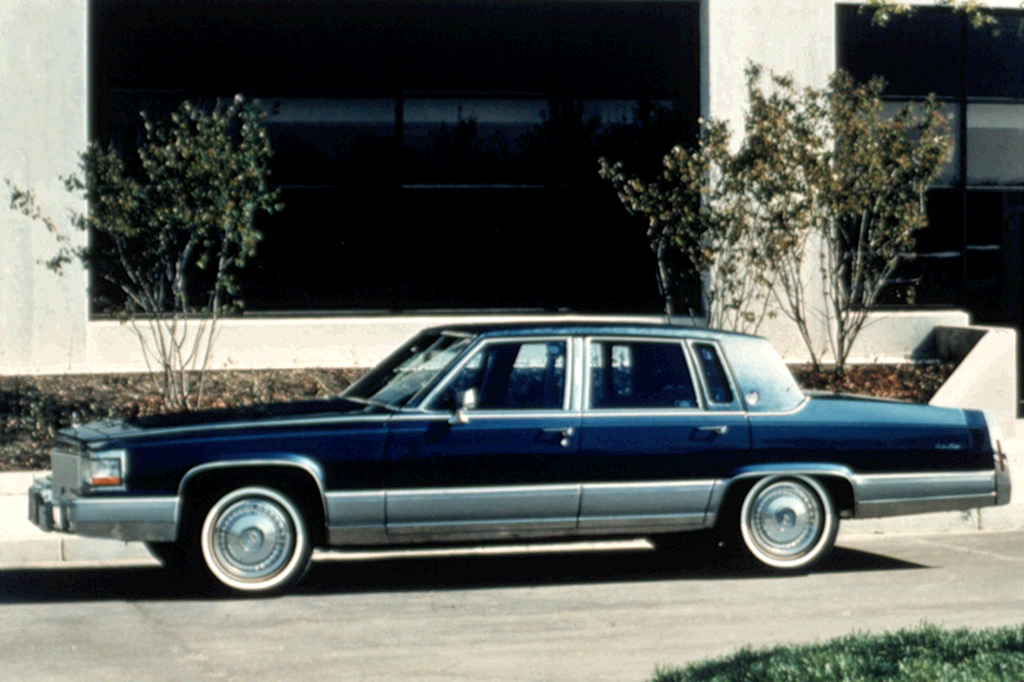 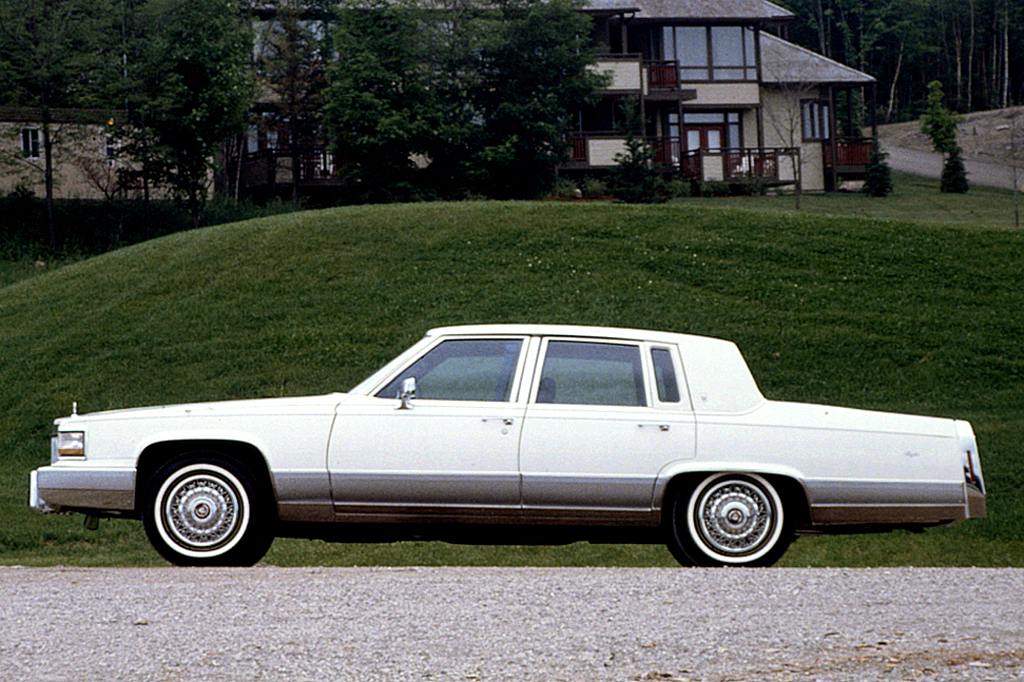 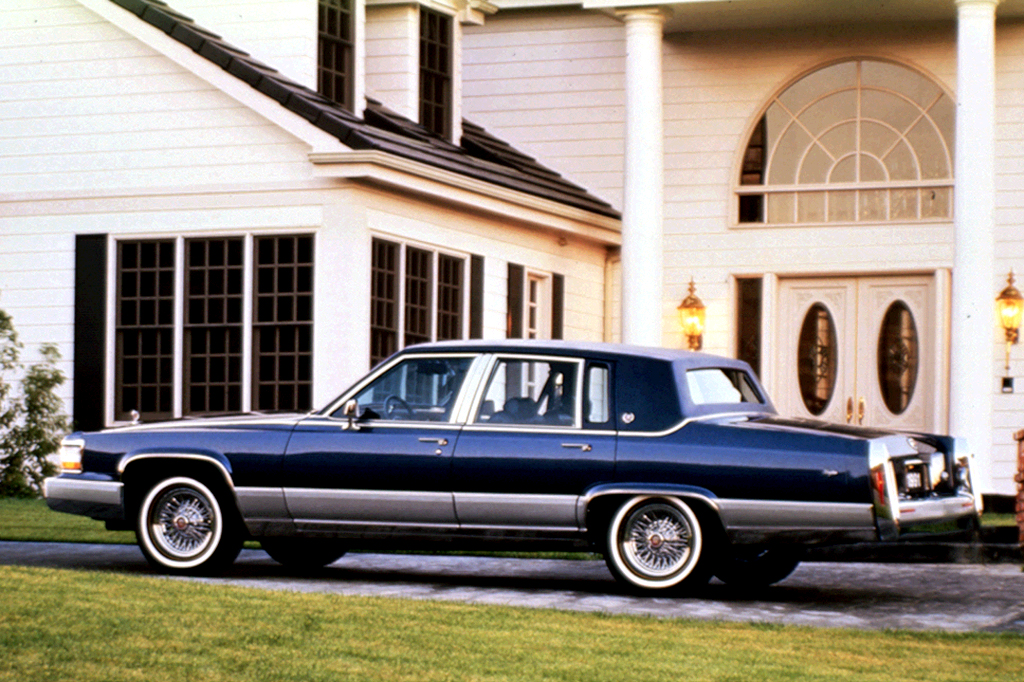 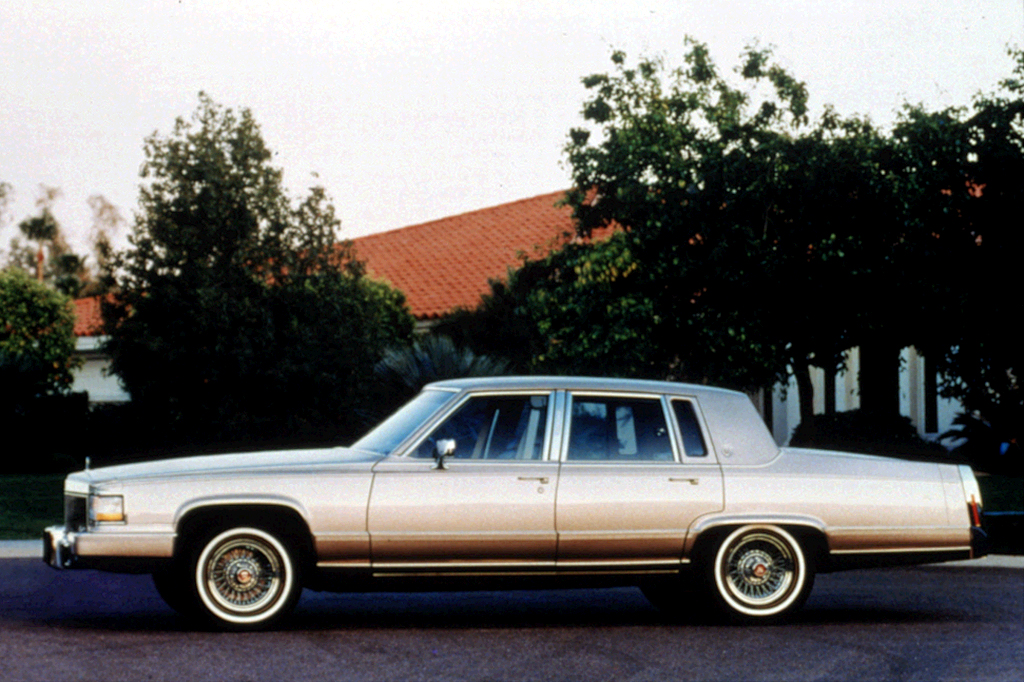 Despite their traditional virtues, these old-timers are undeniably overweight and clumsy compared to most other luxury sedans, including Cadillac’s own DeVille/Fleetwood, the Lincoln Continental, and the Chrysler Imperial and New Yorker Fifth Avenue. Even so, these big rear-drive Caddies still have legions of fans, many of whom wouldn’t want anything else on the market.

At 221 inches overall, the 4-door Brougham sedan ranked as the longest car built in the United States–an inch longer than the Lincoln Town Car, which was redesigned for 1990. That year, a fuel-injected 5.7-liter V8 became available, rated at 175 horsepower, as an alternative to the standard carbureted 5.0-liter engine. Antilock braking also arrived for 1990, as standard equipment. Broughams earned revised exterior styling, though the changes were not dramatic. New standard features included an electronic instrument cluster, rear-window defogger, and black walnut burl interior trim.

A carbureted, Oldsmobile-built 5.0-liter V8 was the standard engine from 1986 to 1990. For 1990, a fuel-injected 5.7 liter V8 became available, but only with a Coachbuilder or Trailer Towing package. A year later, that engine jumped from 175 to 185 horsepower, and could be ordered for any Brougham. A Chevrolet-designed, fuel-injected 5.0-liter V8 became standard for ’91, developing 30 more horsepower than the prior carbureted engine.

Though hardly a fireball when pushing hard on the gas pedal, the early 5.0-liter engine proved to be adequate for most Brougham buyers. Installing the 5.7-liter V8, though, gave the Brougham honest ability to keep up with traffic. Despite pushing nearly 4300 pounds, that engine delivers brisk acceleration. Cadillac estimated that a Brougham accelerated to 60 mph in 10.5 seconds with the 5.7-liter, versus a lethargic 14.3 seconds with the standard V8. Performance would be better if the transmission would kick down to passing gear more quickly. The 5.7-liter engine gets less fuel mileage than the base V8s, which are no misers either.

Brougham buyers get a bountiful interior and scads of trunk space. Other bonuses include quiet, smooth running and a soft ride, but a Brougham clearly lacks the roadability of European luxury cars. Steering feel is very light, which can be a major blessing when trying to park this big Brougham. Although it firms up at higher speeds, the steering still feels vague, though the variable-assist system introduced for 1991 was an improvement.

By the end of its run, the Brougham’s suspension wasn’t as soft as in prior years, but it’s still far from firm. You can expect wallowing on wavy or bumpy pavement, and plenty of body lean in turns. You also get a surprising amount of wind noise.

Standard antilock brakes are a big plus, but a spongy brake pedal makes it hard to modulate braking pressure. Visibility is hindered by beefy rear pillars and wide side pillars. Door openings are tall and wide, making it easy to get in and out. Passenger space is bountiful for six adults, except for a surprisingly limited amount of front leg room for tall drivers. On the down side, soft seats provide little comfort on long trips. The dashboard comes out of the past, limited to a horizontal speedometer and a fuel gauge. Various controls are scattered about, making some of them (including the dash-mounted wiper switch) difficult to operate while driving.