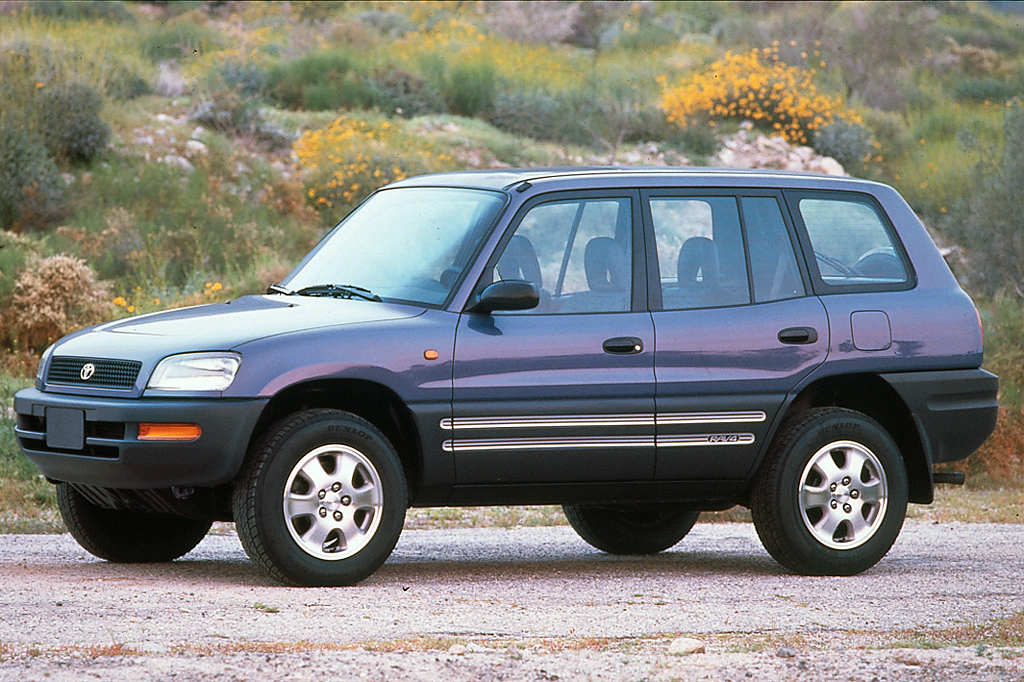 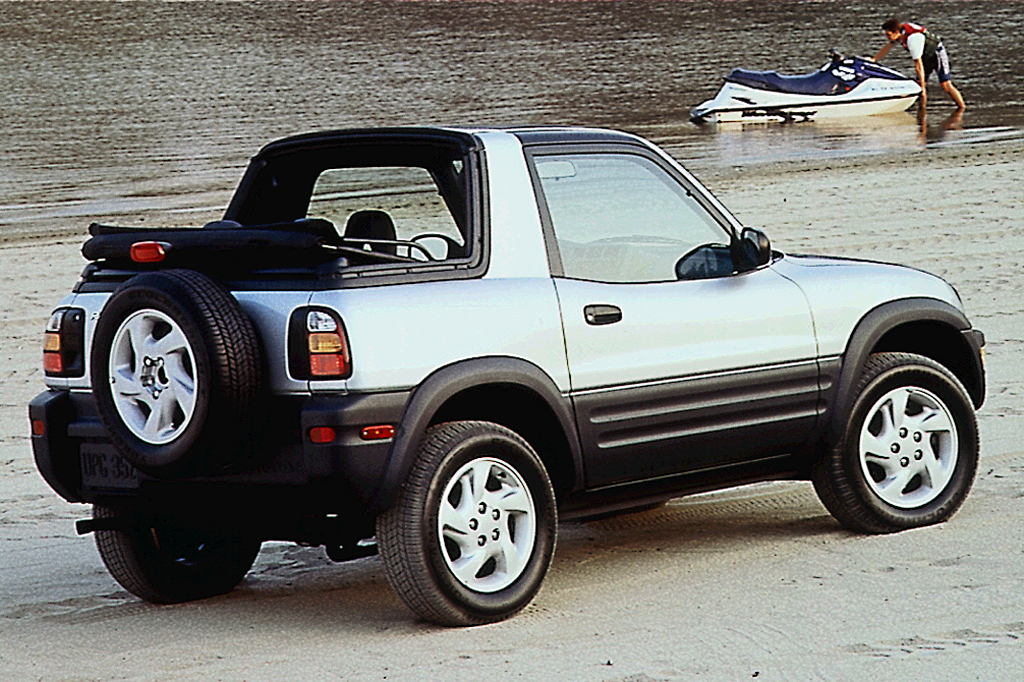 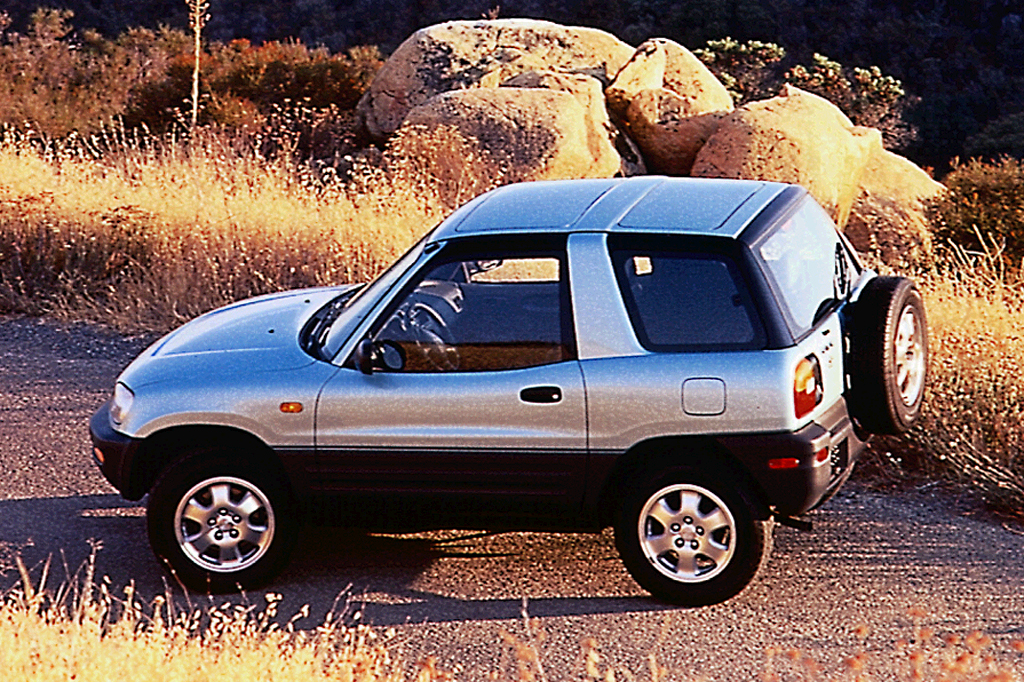 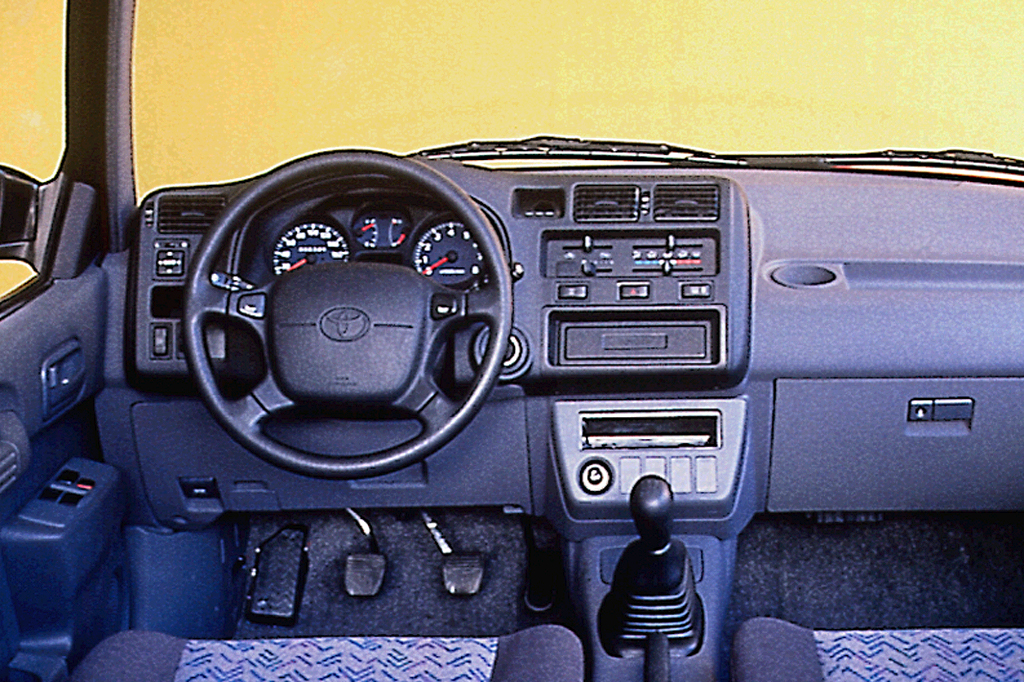 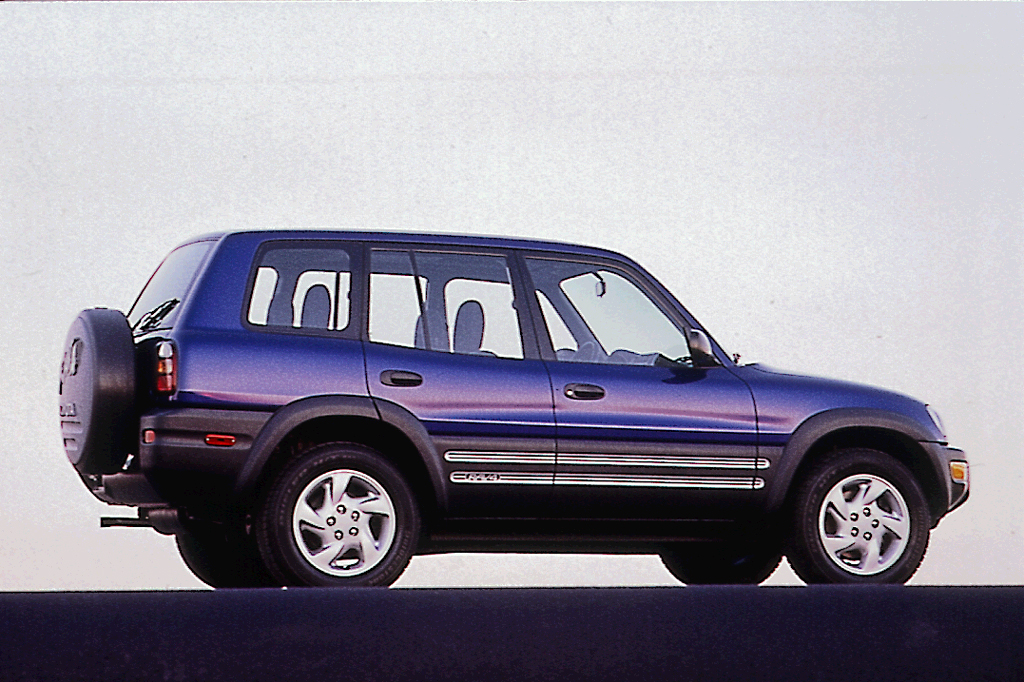 Despite the RAV4’s pluses, Honda’s CR-V is roomier, quieter, and more practical–a better compact wagon and miniSUV than Toyota’s offering.

Toyota launched a pint-sized sport-utility vehicle early in 1996. Based loosely on the sporty Celica coupe platform, the RAV4 departed from truck-based SUVs by featuring a fully independent suspension, unitized construction, and no separate low-range 4WD gearing.The RAV4 wagons came in 2- and 4-door form, with front-wheel drive or permanently engaged 4-wheel drive. Sole engine was a 2.0-liter 4-cylinder, initially rated at 120 horsepower. A 5-speed manual transmission was standard, with 4-speed automatic optional (except for the 2-door 4×4). Manual-shift 4x4s came with a center differential lock, however, which could be useful for off-road operation. Antilock brakes were optional on all models. Designed especially for the U.S. market, the 4-door RAV4 rode a wheelbase 8.3 inches longer than the 2-door’s, and measured 16.1 inches longer overall. The 2-door was a hardtop wagon, with a swing-out tailgate and an optional twin tilt/removable aluminum sunroof. Dual airbags were standard.

Only one engine has been available: a dual-overhead-cam 2.0-liter 4-cylinder, producing 120 horsepower (later, 127). Either a 5-speed manual transmission or optional 4-speed automatic might be installed. Automatic has not been available for the 2-door 4×4.

The RAV4 delivers a softer, more-compliant ride as well as more-responsive steering than truck-based SUVs. Unlike the Sidekick/Tracker, which often feels ready to lean over, the RAV4 feels stable and carlike while cornering swiftly, and robust when traversing rough roads. Its permanent 4-wheel-drive system is more convenient than the on-demand systems used by the early competition. Still, you can expect some choppiness on scalloped freeways and over patchy pavement, especially with the shorter-length 2-door model.

Tire roar is always noticeable, and wind rush rises sharply as speed increases. The engine becomes quite boomy when worked hard, too.

RAV4 also lags behind most small cars in terms of performance. A manual-shift 4WD 2-door accelerated to 60 mph in 10.5 seconds, but an automatic 4-door needed about 13 seconds–and that was without a load. We’ve averaged a disappointing 20.8 mpg from an automatic 4WD 4-door in city/highway driving. The lighter-weight front-drive models should be a little thriftier, and also quicker.

Four adults fit comfortably inside a 4-door RAV, but back-seaters don’t get much leg or knee room. Rear entry/exit is a squeeze for larger folks, too. The 2-door is best enjoyed with two adults up front and two children in back, because its rear seat is even tighter than the 4-door’s. Rear access also is more difficult, despite a slide-forward feature on the right-front seat.

Cargo space is good in both body styles, considering their exterior dimensions.

Though not as commanding as in some SUVs, the driving stance allows clear views all around, in either hardtop body style. In the recent convertible, however, the over-the-shoulder view is impaired when the rear roof is in place. On the plus side, the convertible’s top fits well, though it takes a while to raise or lower.

Most people are likely to be satisfied inside, though more rearward seat travel would be nice–especially for taller folks. The carlike dashboard is simple and convenient.