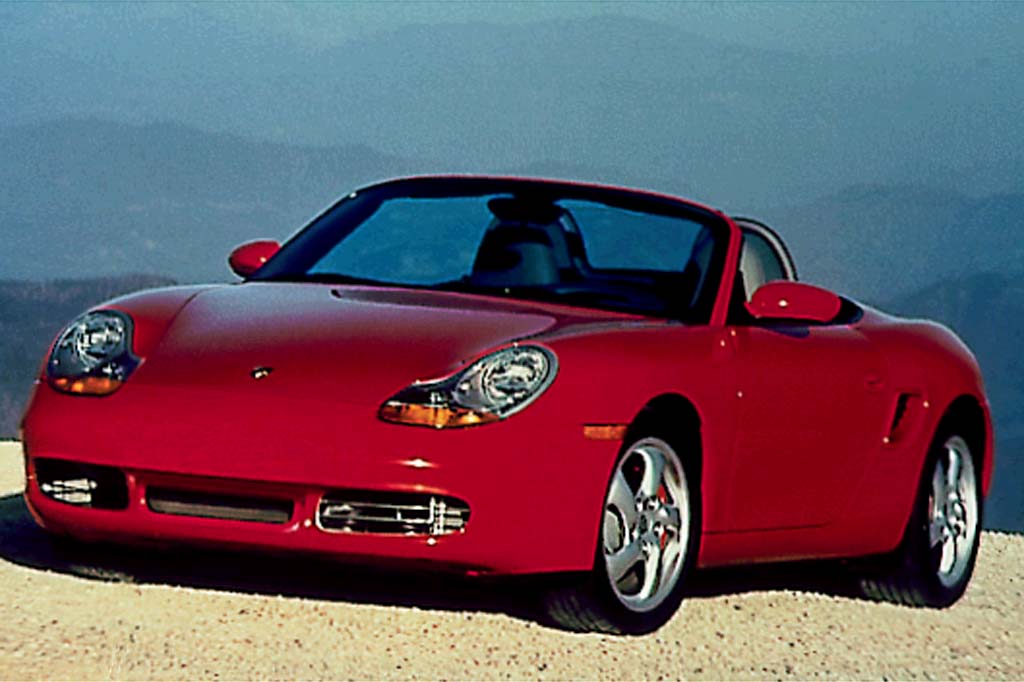 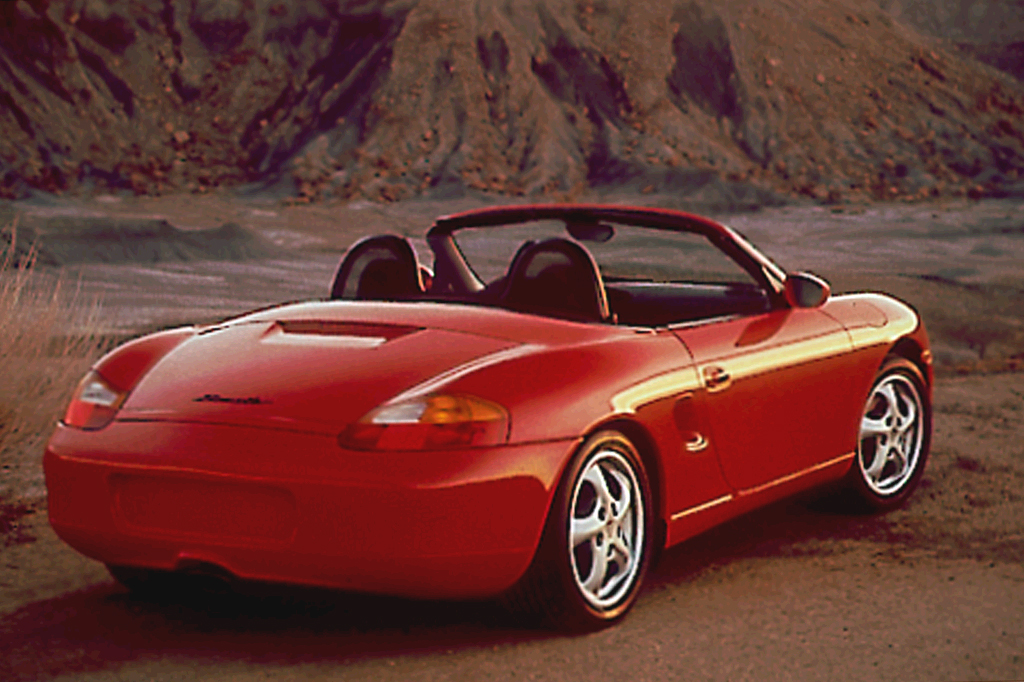 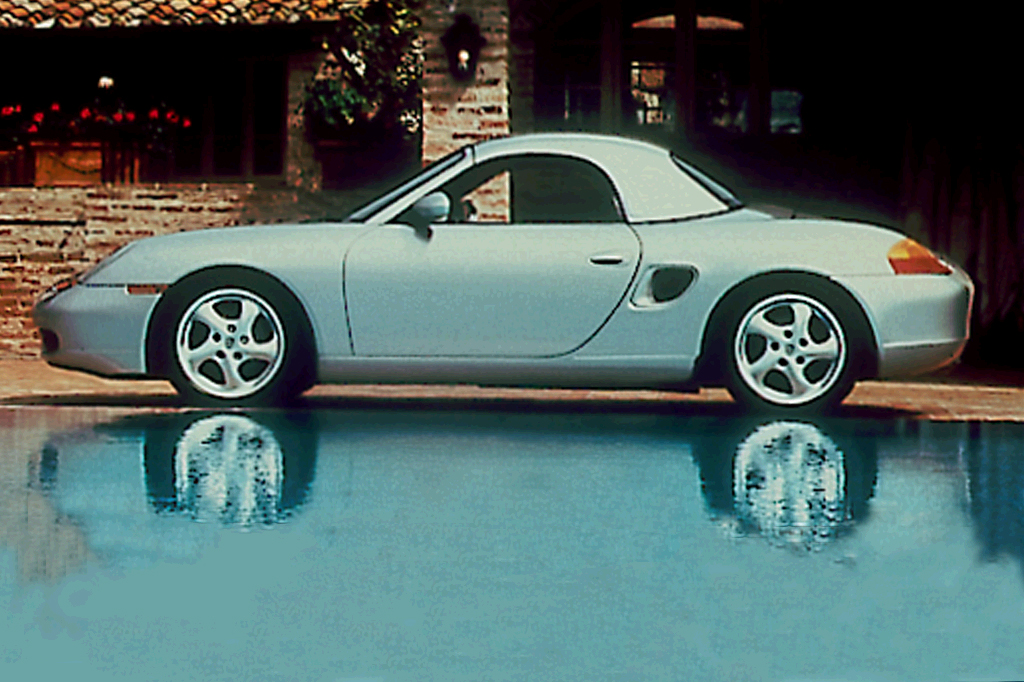 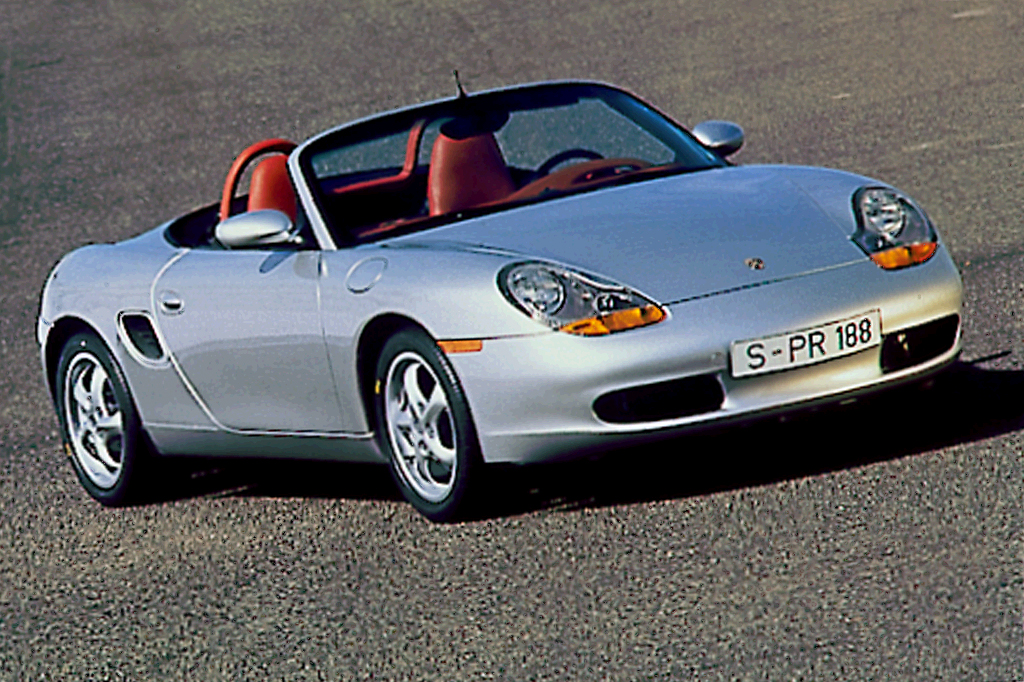 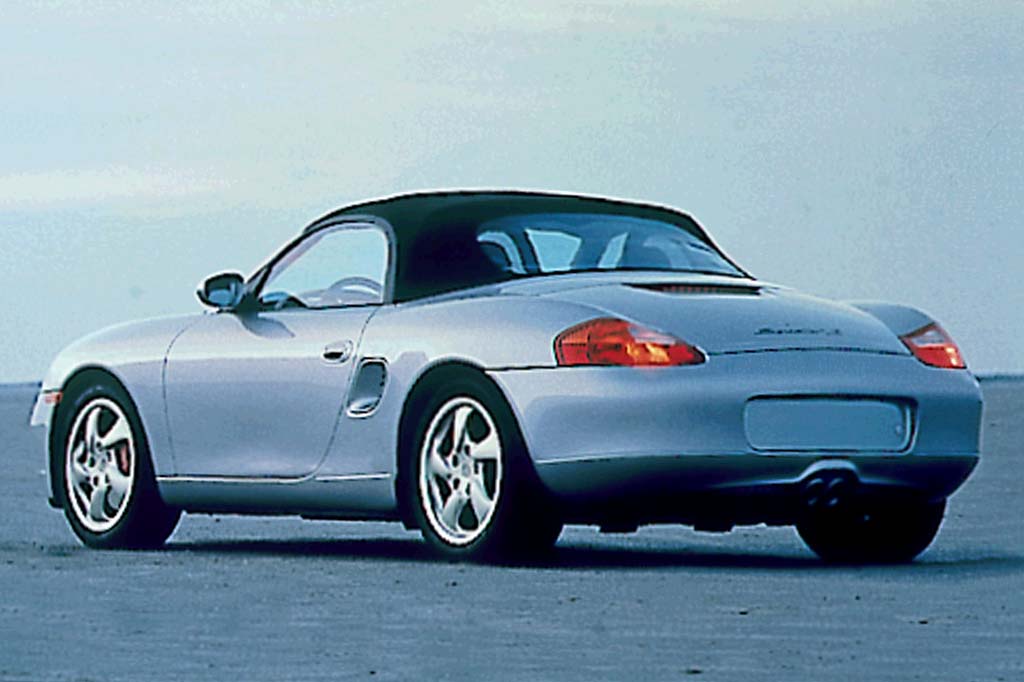 As a more affordable Porsche, the Boxster is mainly for those who appreciate a Porsche’s special virtues. BMW’s 6-cylinder Z3 2.8 is a more “traditional” sports car that’s close in performance, while some observers favor the Mercedes-Benz as the best all-around machine. All are good in their way, and cost about the same, so take your pick. No, it’s not perfect; but Boxster is a genuine sports car, and genuinely entertaining on the road.

An “entry-level” Porsche debuted for 1997, serving as the company’s reply to popularity of “retro” 2-seaters. First previewed four years earlier as a show car, introduced after the start of the 1997 model year, it was the company’s first all-new model in 19 years. Named in part for the flat “boxer” (horizontally opposed) configuration of its midmounted water-cooled engine, the Boxster was a 2-passenger roadster. Porsche intended to compete against the Mercedes-Benz SLK and BMW Z3, and perhaps attract a few buyers who might otherwise fall for a Mazda Miata (which cost considerably less). Mounted just behind the cockpit, Boxster’s 2.5-liter dual-overhead-cam 6-cylinder produced 201 horsepower and drove the rear wheels through either a 5-speed manual gearbox or an optional 5-speed “Tiptronic” transmission–an automatic that permitted manual shifting. A power-operated soft top and antilocking 4-wheel disc brakes were standard. Most maintenance work had to be done from the underside. The only other service access consisted of a behind-the-seats port for checking coolant level and replenishing engine oil. High-performance Z-rated 16-inch tires were wider in back than up front. The power top fit behind a hard cover. One small trunk sat at each end of the car, offering combined capacity of 9.1 cubic feet of lockable cargo space. Options included 17-inch wheels/tires, traction control, and a cockpit “wind blocker.” A 55-pound aluminum hardtop also was available, as was a roof storage system for toting skis or bicycles (with the top up or down). An automatic child-seat detection system could be dealer installed.

Mounted behind the cockpit, the initial 2.5-liter, horizontally opposed 6-cylinder engine developed 201 horsepower. A 5-speed manual transmission was standard. Boxsters might instead have Porsche’s 5-speed “Tiptronic” transmission, which allows manual (but clutchless) gear selection. Two new dual-overhead-cam engines emerged for 2000: an enlarged (2.7-liter) base six, and a 3.2-liter six for the new high-performance S model, which got a 6-speed manual gearbox. For ’03 base engine gained 11 horsepower while the S engine gained 8.

Looks are just the starting point of the Boxster’s appeal. It may be the latest “budget” Porsche, but the Boxster is no less a thoroughbred sports car than its big-brother 911. This roadster entertains most on twisty roads, tracking with grippy sure-footed stability, little body lean, and sure control, aided by rifle-quick steering with ample feedback.

Unfortunately, the penalty for this handling prowess is an annoyingly stiff ride, with constant minor pitching on some freeways, and lots of thumpy jiggle over tar strips and patches. Add in marked noise from engine, wind, and tires, and the Boxster would be wearing on a long Interstate trip.

Fuel economy is excellent for the performance, however. We averaged a laudable 21.7 mpg in spirited city/highway driving. “Panic” braking is arresting-cable swift. Mash the pedal and the Boxster just hunkers down and stops.

Some drivers feel cramped in a Boxster, even with the top down, while others have no complaints. Audio and climate controls are handy but confusing. Many drivers would prefer a tilt steering wheel instead of the standard telescopic adjustment. As it is, the wheel rim tends to mask part of the tachometer face.

Additional gripes: an old-fashioned floor-hinged gas pedal; analog and digital speedometers; no in-dash glovebox; and no top-side engine access other than three “service” ports in the rear trunk.

On the plus side, the Boxster’s two cargo holds (front and rear) take a fair bit of stuff for a 2-seater, the seats are supportively comfortable, and visibility is okay despite a “bathtub” driving position and the soft top’s fairly blind rear quarters. That top works quickly and seals well, but isn’t completely covered when folded under its lid. Also, the plastic rear window seems cheap at this price.

The optional behind-the-seats wind blocker is effective, but cumbersome to remove or install.

Boxster is solid and rattle-free for a modern ragtop. One test car had some body shake over railroad tracks, though paint was gorgeous and panel fits precise–a sharp contrast to the thin, cheap-looking black plastic used on the dashboard and console.