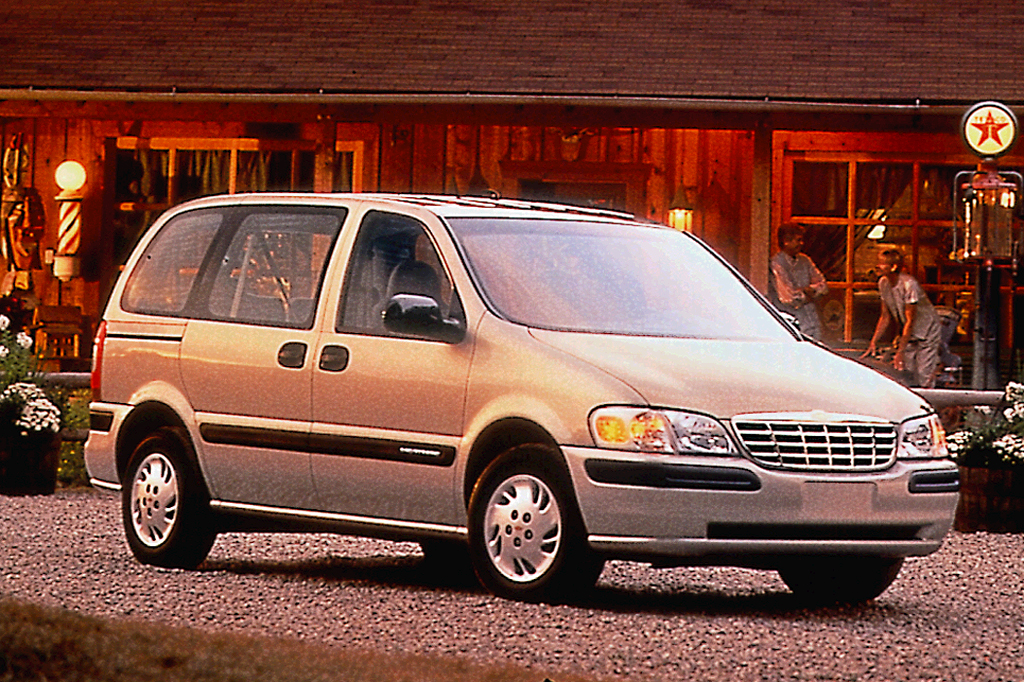 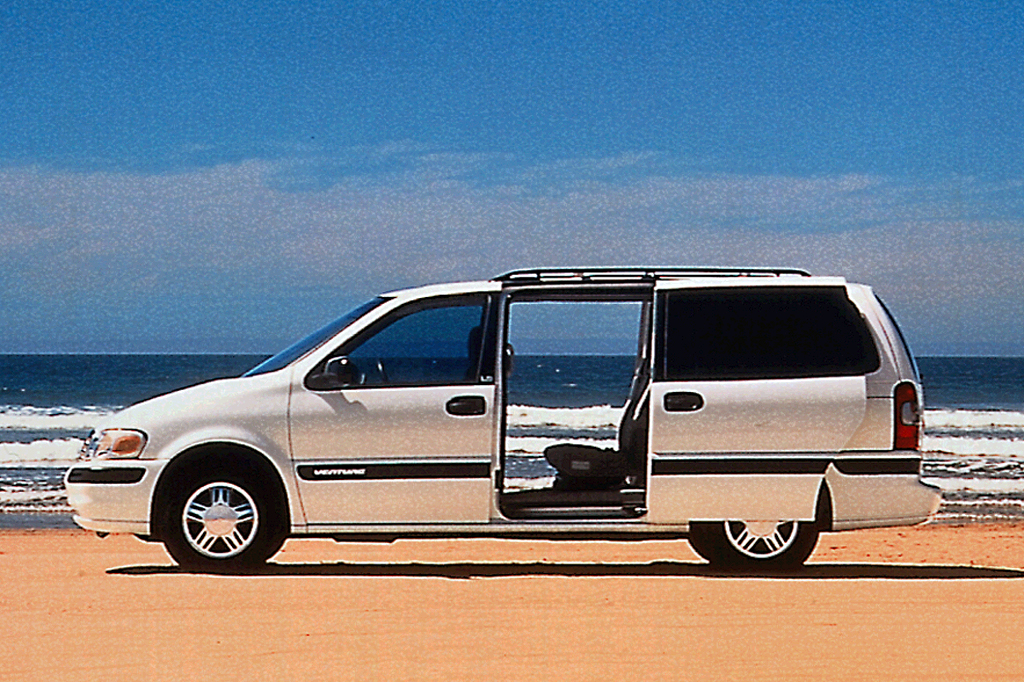 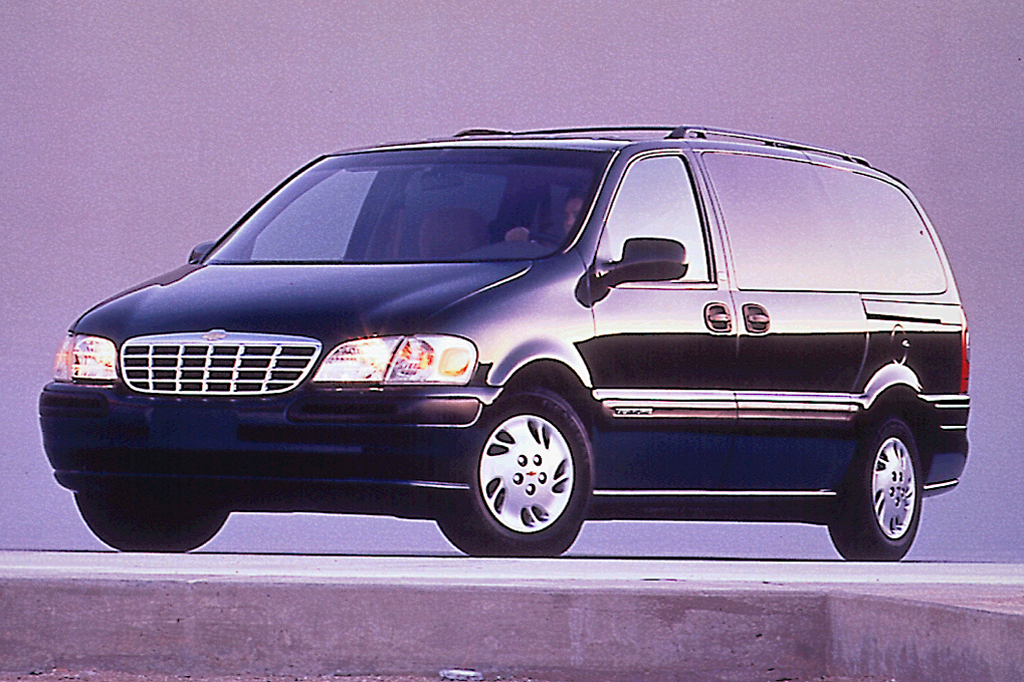 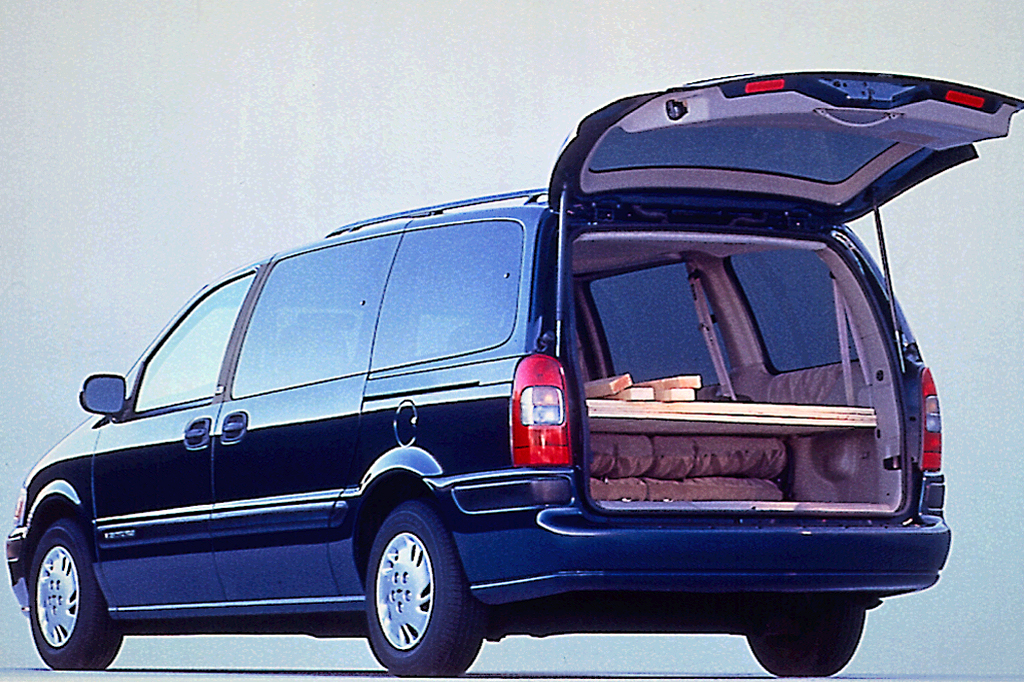 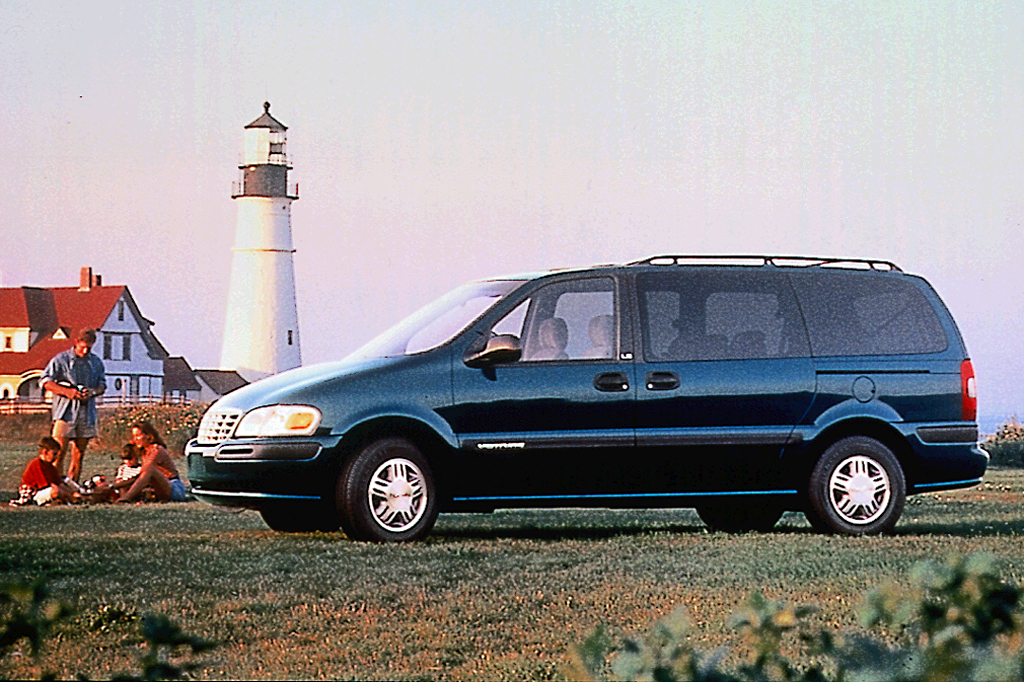 Critical shoppers are likely to find a lot to like about the GM trio of minivans, despite the discomfort endured by some backseat riders due to the low seats.

Redesigned from the ground up, Venture was one of a trio of second-generation, front-drive GM minivans. Except for styling and trim levels, Chevrolet’s minivan was similar to the Oldsmobile Silhouette and Pontiac Trans Sport. Plastic body panels were replaced by steel skins, and a passenger-side airbag became standard. Standard-length Ventures rode a wheelbase 2.2 inches longer than their predecessor, but measured 4.6 inches shorter overall. The new extended-length model was 8 inches longer in wheelbase, and 14 inches longer overall. GM’s exclusive power sliding passenger-side door was optional only on the long-wheelbase version. Also limited to extended-length models was the optional manual sliding door on the driver’s side. Both sizes came in base or LS price level. All models used a 180-horsepower, 3.4-liter V6 engine and 4-speed automatic transmission. Standard safety features included dual front airbags, antilock braking, and daytime running lights. Traction control and built-in child safety seats were optional. Standard 7-passenger seating in short-wheelbase models included two front buckets, a 2-person bench seat for the middle row, and a 3-person rear bench. Modular split bench seats were standard on extended-wheelbase models, with modular bucket seats optional.

Only one powertrain has been installed in Ventures: a 3.4-liter V6 engine rated at 180 horsepower, driving a 4-speed automatic transmission. Horsepower rose to 185 for 2000.

In terms of interior space utilization, General Motors designers did their job well. Even with the minivan’s split-bench seats, they managed to retain the flexibility of the convenient modular seating concept. At the same time, they added innovative storage helpers throughout the interior, and the Venture’s optional driver-side sliding door opens wide enough to permit access to the third row of seats.

Chevrolet’s minivan feels somewhat sportier than those from Ford or Chrysler. Steering is precise and accurately communicates the action of the front tires. Body lean is moderate in turns, and the minivan’s all-season tires grip securely. The suspension absorbs most bumps with ease and delivers a comfortable, stable highway ride. Test Ventures halted with good control and a progressive pedal feel. Wind noise around the mirrors has been prominent at highway speeds, but road and engine sounds tend to be well-muffled.

The 3.4-liter V6 engine produces sufficient acceleration for nearly every usage. On the other hand, both Ford and Chrysler have offered optional engines with higher torque ratings, which are better able to cope with full loads of cargo and/or passengers. The automatic transmission keeps unnecessary gear changes to a minimum. It also reacts quickly when a downshift is needed to pass or merge. As for economy, we averaged 15.3 mpg with an early Venture, in a blend of city/suburban commuting and freeway travel–just about average in the minivan league. A later test of an extended-length model averaged 17.6 mpg.