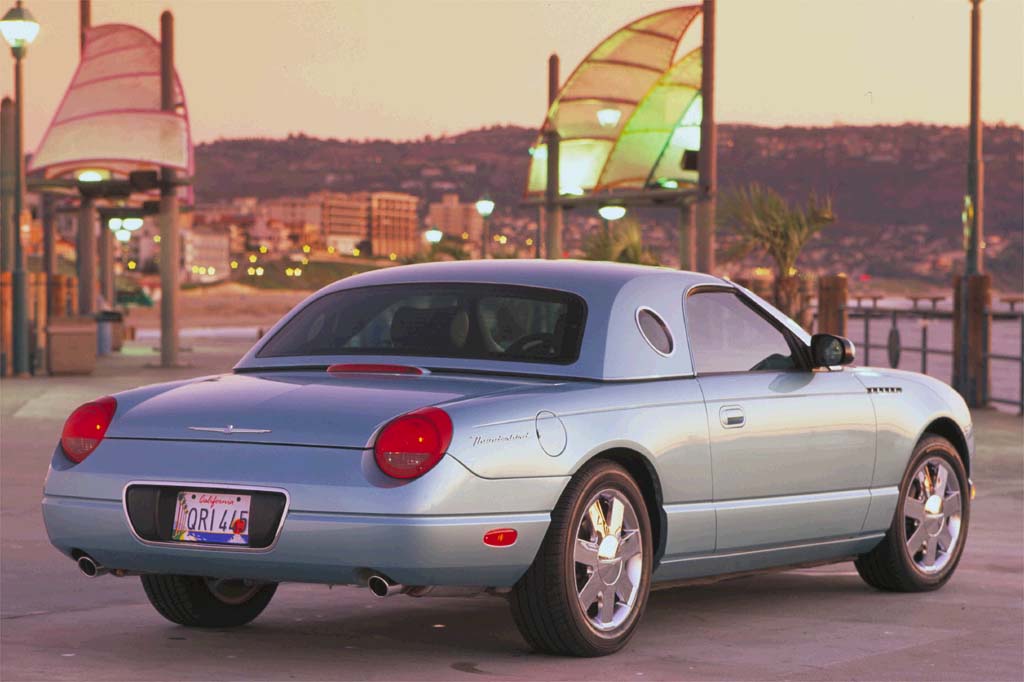 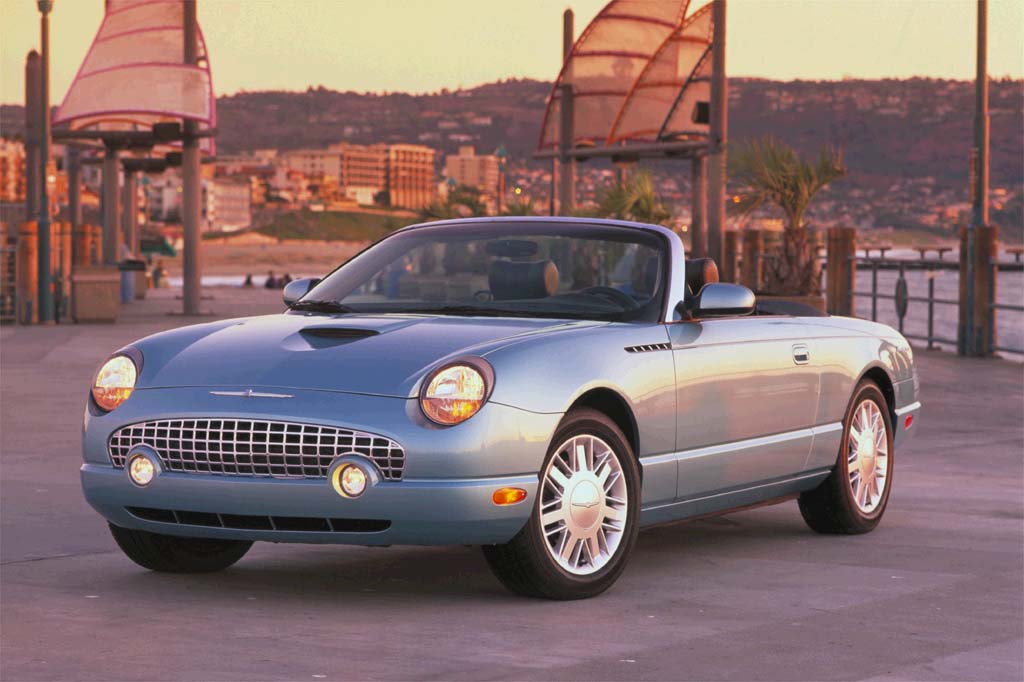 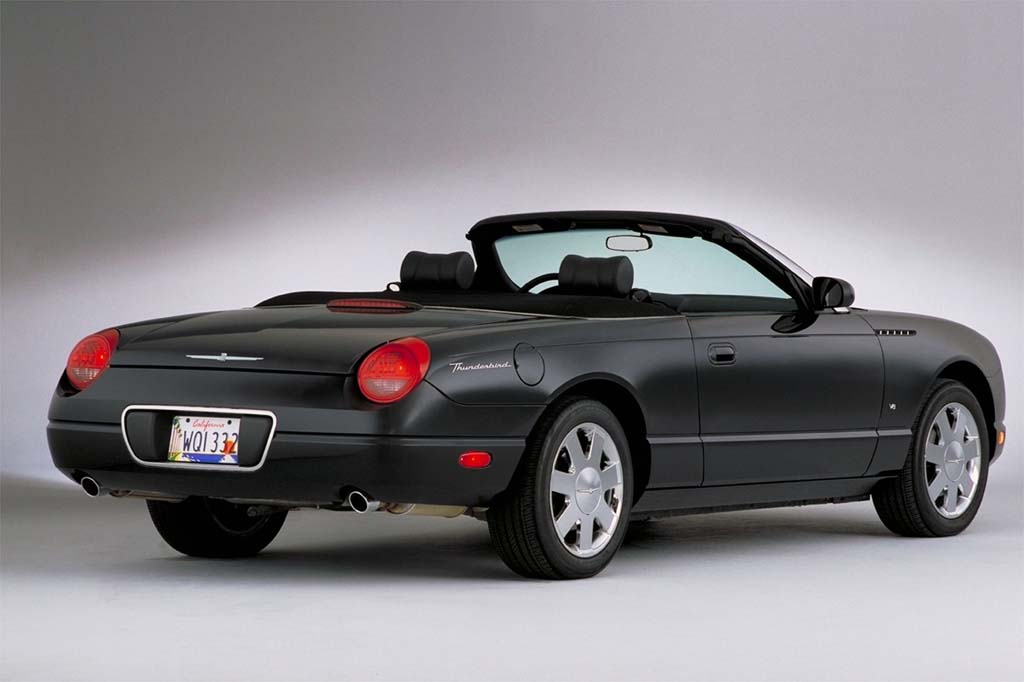 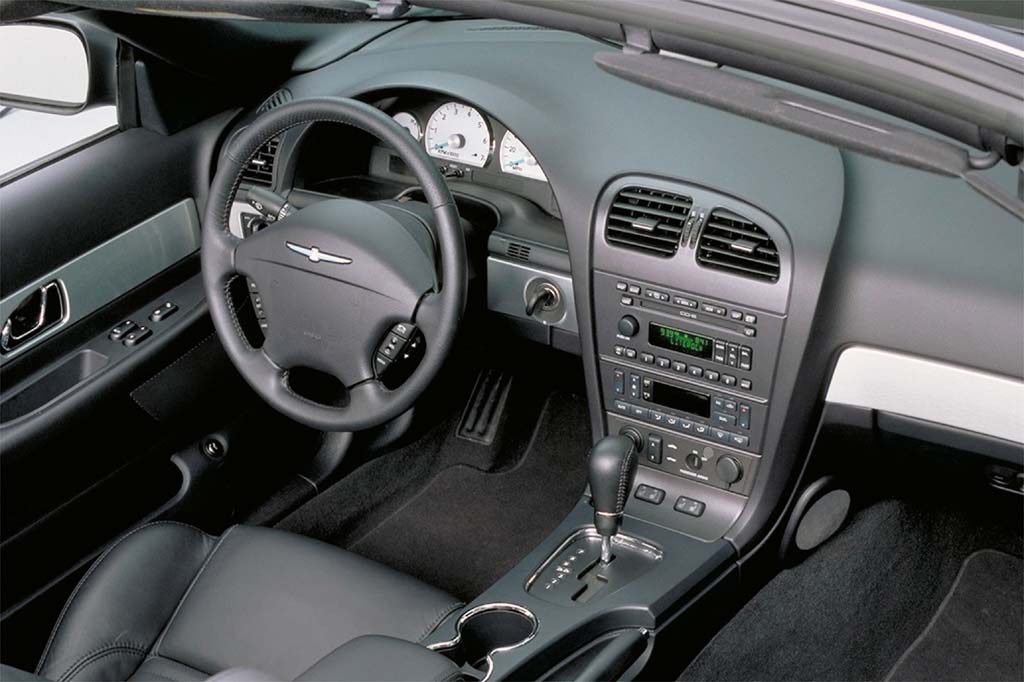 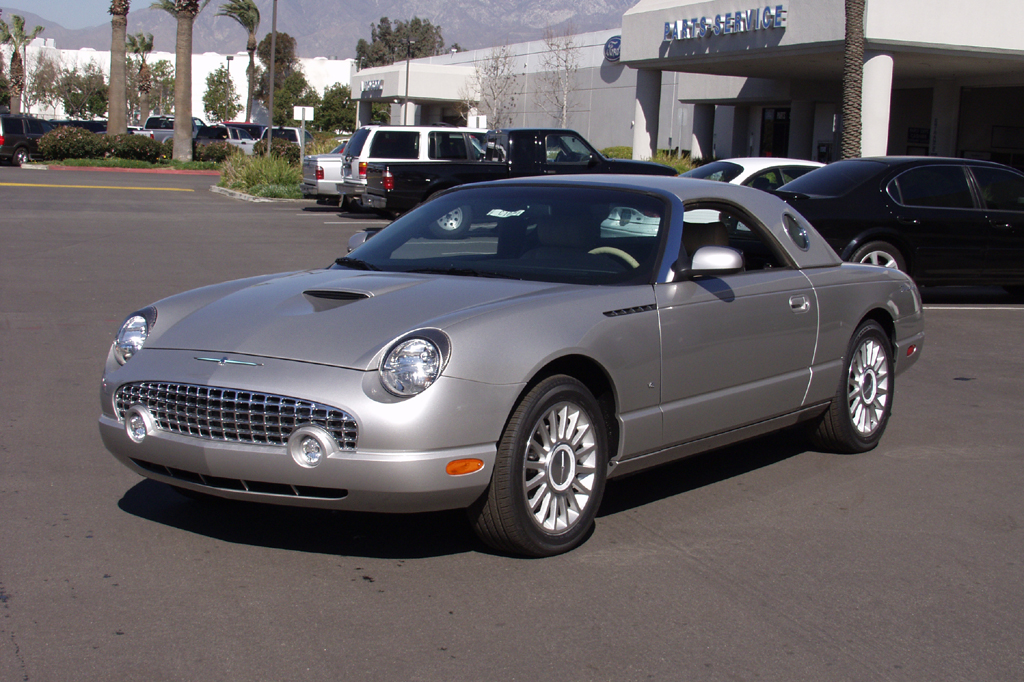 Ford aimed the Thunderbird at “relaxed sportiness,” and basically hit the mark–though sales slumped after initial high demand. The two-seater is not as mechanically refined as it should be, and interior materials fail to impress. Even so, Thunderbird is more practical than a genuine sports car. As a near-luxury two-passenger V8 convertible, it’s in a class by itself.

Ford revived a famous old name with the 2002 Thunderbird, a two-passenger convertible with unabashedly retro styling cues. It was built on a shortened version of the rear-wheel-drive platform that had been developed for the Lincoln LS and Jaguar S-Type sedans.

A removable hardtop with the T-Bird’s “trademark” porthole windows was available to supplement the standard power-folding soft top, which had a heated glass rear window. The only engine was a 3.9-liter V8 shared with the LS. The sole transmission was a Lincoln/Jaguar five-speed automatic.

Thunderbirds came with antilock four-wheel disc brakes, side airbags, 17-inch alloy wheels, and a CD changer. A Premium model added chrome wheels and traction control, Interior upgrade packages matched various trim pieces to the car’s exterior color. Many Thunderbirds were painted in pastel hues, as had been the case with the original 1955-57 models.

In its first season on the market, the Thunderbird’s dual-overhead-cam 3.9-liter V8 engine made 252 horsepower. Output rose to 280 hp for 2003. All Thunderbirds have a five-speed automatic transmission. For 2005, a manual-shift feature was made available on the 5-speed automatic.

Full-throttle standing-start acceleration was good in the 2002 model. But the 2002s were sometimes slow to respond in the 35-55 mph range, because the transmission did not always downshift promptly.

Later models feel strong at all speeds, able to reach 60 mph in 7.2 seconds. However, sloppy, indecisive gear changes and tardy downshifts still frustrate smooth delivery of power and inhibit passing response. The manual-shift feature does not help much, either.

Although the Thunderbird’s ride is not as smooth or solid as might be expected, it’s more compliant than most two-seat convertibles. That’s especially with the top down, when bumps can be absorbed by body flex. Expect significant top-down cowl shake over bumps, but rigidity is okay with the hardtop in place.

Serving as a relaxed cruiser, the T-Bird is too big and heavy to be sports-car agile, especially in tight maneuvers. Still, the two-seater exhibits good steering response, modest body lean, and good cornering grip.

Quietness is another virtue. A cozy coupe with hardtop in place, the Thunderbird is among the quieter convertibles with the soft top up or down. Relatively minor wind disturbance is evident with the top down, but normal conversation is possible with the windows up.

Road noise and the exhaust note are appropriately subdued, and the engine emits a satisfying whine in full acceleration. The convertible top is nicely lined and insulated.

Smaller-sized gauges improved the 2003 instrument cluster, but they retained a hard-to-read black-on-white scheme with turquoise needles. Audio and climate controls are close to the driver, but look-alike climate buttons can be confusing. A convenient central latch on the windshield header manually releases the soft top, which powers down in about 8 seconds.

Overall, the cabin falls short of seriously upscale in appearance and feel, with run-of-the-mill materials and, in some cases, indifferent assembly. Optional body-color interior trim looks jazzy, but some of it has a tacky, painted appearance.

Thunderbirds are wider than most two-seaters, but long-legged folks might find footwells confining. With the top up, tall occupants will want more head room. The driving position is nicely tailored via a standard power tilt/telescopic steering wheel, but seats are fairly hard and mostly flat.

Outward vision is compromised by thick windshield pillars and, top-up, by short side windows and the top’s wide rear quarters. The hardtop’s porthole corner windows help some, but vision for lane changes is still blocked by the right headrest. Entry/exit is better than in most two-seaters, aided by conventional ride height, though long doors can frustrate in tight spaces.

Careful packing gets a couple’s small bags into the shallow trunk, but it won’t accept tall objects. A bin behind the seats is suitable for purse or briefcase, but nearly inaccessible with the top up.