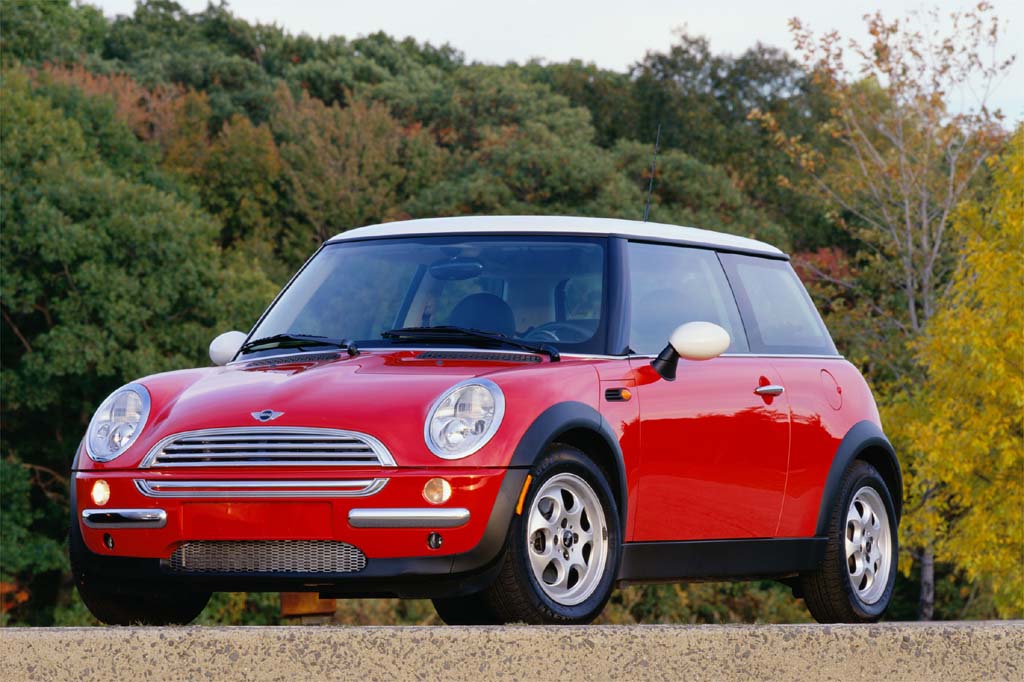 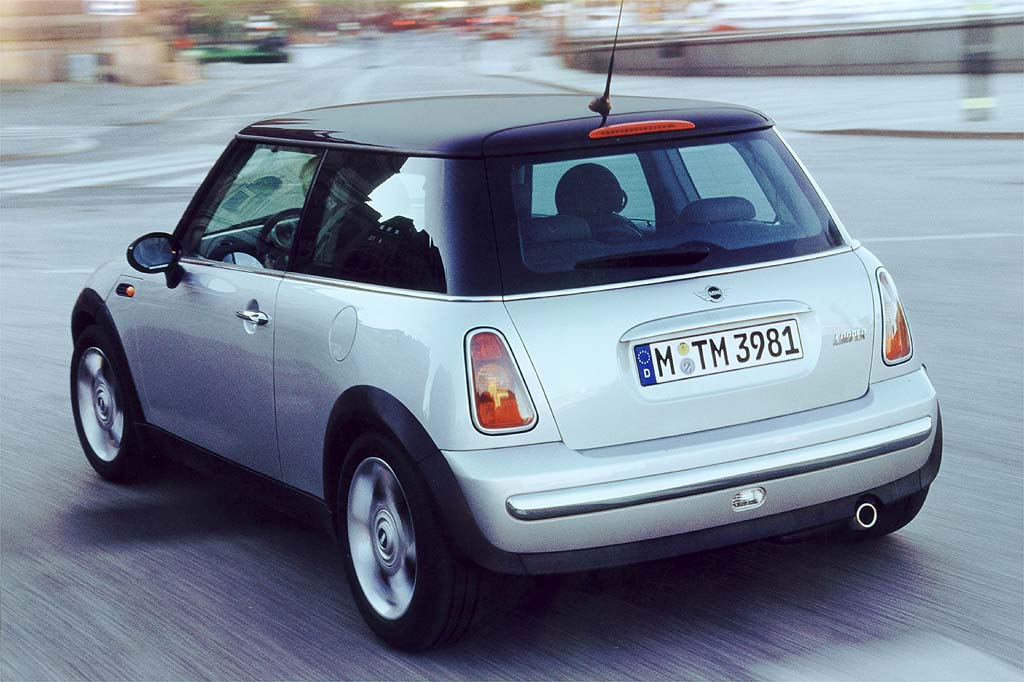 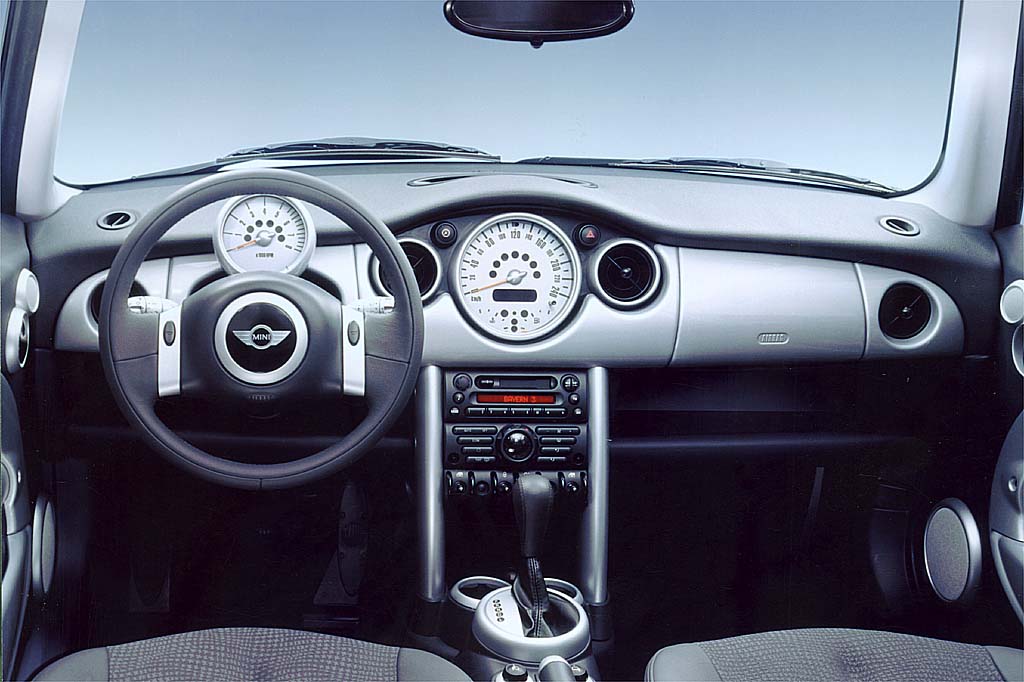 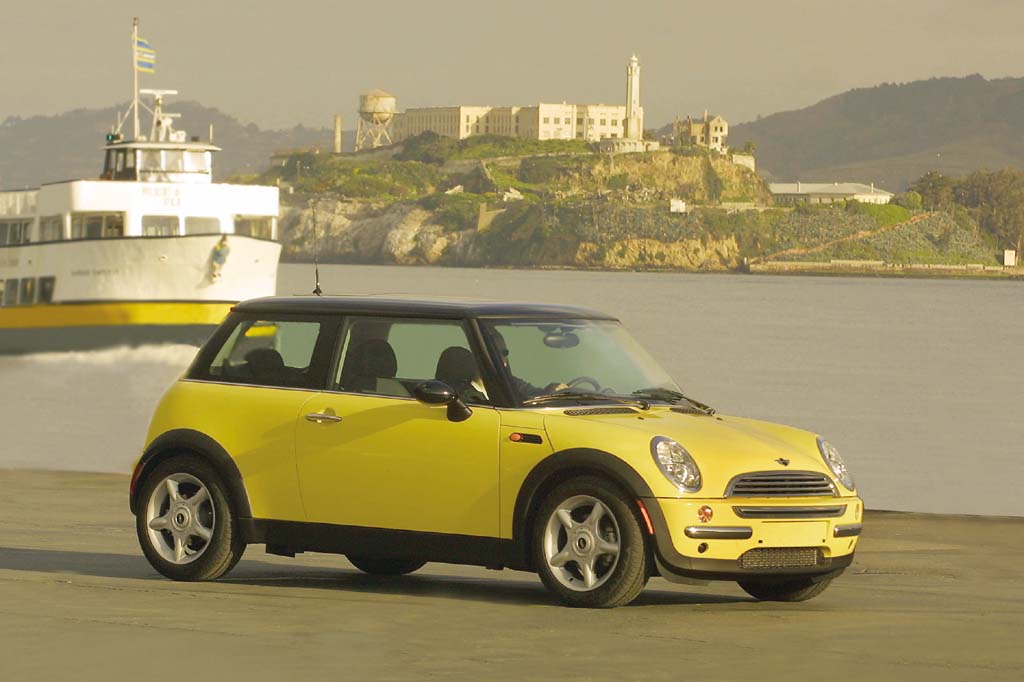 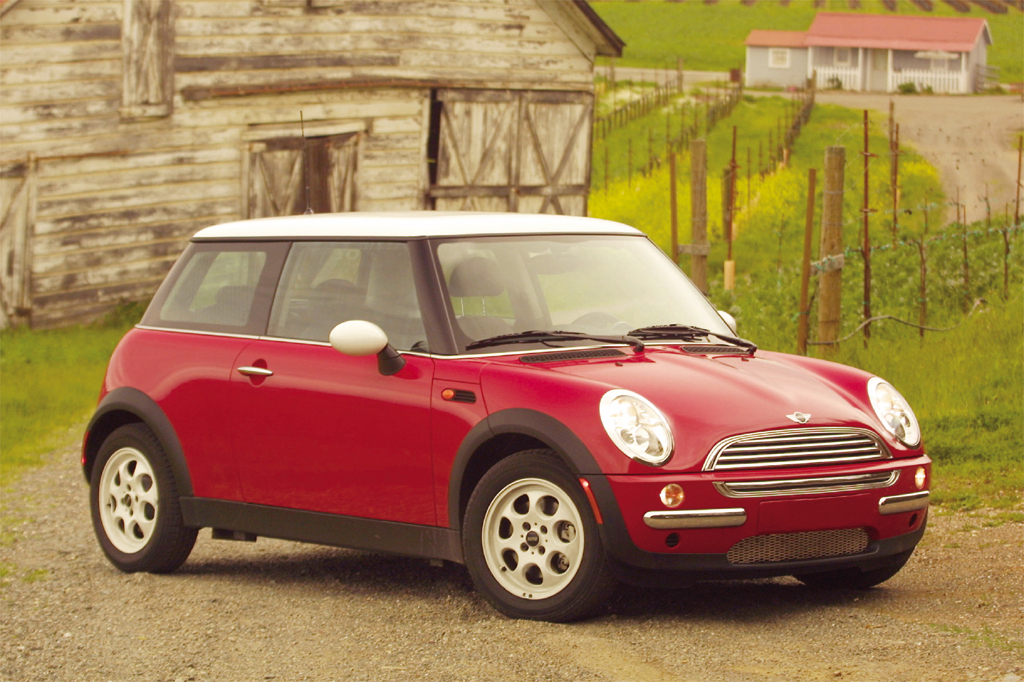 Brimming with character, and available with a dizzying array of personalizing accessories, the Cooper is also an exceedingly well-mannered small car. It’s really a sport coupe rendered in the smallest scale. Sophisticated driving dynamics are spoiled only by a ride that too easily becomes harsh on imperfect pavement. Also, the base model has no surplus of power.

All-new in 2002, this two-door hatchback had the looks and spirit of Britain’s iconic 1959-2000 Mini. Yet, it was chiefly a BMW design built at the German company’s plant in England.

The front-wheel-drive Mini was positioned as a sporty coupe rather than an economy subcompact. Seating four within a boxy, retro-style body, it was among the smallest cars sold in the U.S. Specifically, the Mini was some 18 inches shorter and 400 pounds lighter (but 8 inches wider) than a Volkswagen New Beetle.

Two models were offered, both with a BMW-developed 1.6-liter four-cylinder engine. The base Mini Cooper got a 115-horsepower engine, while a supercharged version in the Cooper S developed 163 horsepower. A manual transmission was standard–a five-speed for the Cooper and a six-speed for the Cooper S. The base Cooper could be equipped with an optional continuously variable automatic transmission (CVT), with a manual mode providing six separate virtual “gear ratios.”

The Cooper S got a functional hood scoop and sport suspension, with 16-inch run-flat tires versus 15s (17-inch wheels were an S option).

The S suspension and wheels were available for the regular Cooper, as was a less-aggressive sport suspension. Options for both included antiskid control, Xenon headlamps, navigation and rear-obstacle warning systems, a sunroof, wood-and-leather interior trim, and heated seats.

With manual shift, a test Cooper accelerated 0-60 mph in 9.1 seconds, feeling taxed only during high-speed passing. Mini pegged the Cooper S at 6.9 seconds to 60 mph, though the best time we were able to measure was 7.6 seconds. Both manual transmissions exhibit short, fairly smooth shifts and light clutch action. Fuel economy is good but not class-leading. A test manual-transmission base Cooper averaged 24.5 mpg, while a Cooper S managed 25.9 mpg in mixed driving. Mini recommends premium fuel for both engines. We have been unable to test a CVT-equipped Cooper.

Although it’s the shortest car sold in America, its wheelbase is relatively long; so the base Cooper’s ride is no worse than other performance-oriented coupes. That means it’s choppy over all but glass-smooth surfaces, due in large measure to the taut suspension. The 15-inch base tires soak up bumps reasonably well, but the ride suffers with the Sport Package’s 16-inch run-flats. Those 16s were standard on the S model, which also had a stiffer suspension that makes the ride harsher still. Add the Cooper S’s optional 17-inch run-flats, and bumps become jolting intrusions. Steering/handling is where the Mini excels. All Minis turn on a dime, with outstanding steering response and feel. The base model’s 16-inch Sport Package tires pay dividends, with even sharper reflexes, while the Cooper S takes handling to an even higher level. Most importantly, each Mini exhibits the roadholding stability of a larger, heavier car–even when passing trucks or battling crosswinds. Severe high-speed braking induced momentary right-rear wheel lockup in one test car, but stopping power and pedal feel are otherwise first-rate.

Large center-mounted speedometer forces driver to divert eyes from the road to read it. The tachometer sits atop the steering column, where the wheel rim cuts off its upper portion for some drivers. A navigation screen (if installed) goes in the central dashboard, moving the speedometer to join the tachometer on the steering column. Clear markings differentiate alike-shaped automatic climate controls, which, like those for the audio system, are within easy reach. Nostalgic but low-mounted dashboard toggles govern power windows, locks, and fog lamps. The cabin blends retro cues, modern materials, and solid workmanship, but upscale ambience is compromised by visible mold seams on hollow plastic door-trim rails, and by intentionally-exposed screw heads.

Front passengers get generous seat travel, and the high ceiling accommodates large occupants. Front seats are firm, supportive, but too low for best entry/exit. The sunroof extends partly over the rear seat, and slides over the roof to benefit headroom, but tinted glass and perforated blind don’t protect well against hot sun. The inside rearview mirror is slightly undersized, but an airy greenhouse means great outward visibility. Head room and seat width are sufficient for adults in the rear, though the seat is not contoured or padded for much comfort. Knee space is tight, and confining footwells restrict movement, and thus comfort. Cargo space is tight with the rear seatback up. That seatback folds 50/50, but sections rest intrusively several inches above the load floor. Cockpit storage is tight, and 12-ounce cans are the limit for the two front cupholders.

Engines lack BMW’s turbine-like smoothness, but aren’t coarse even at high rpm. The hatchback design, combined with hard plastic interior surfaces, results in a poor job of muffling ambient noise. Both the 16- and 17-inch tires roar as speed rises, but the only real impediment to normal conversation is wind rush with the sunroof open at 70 mph.