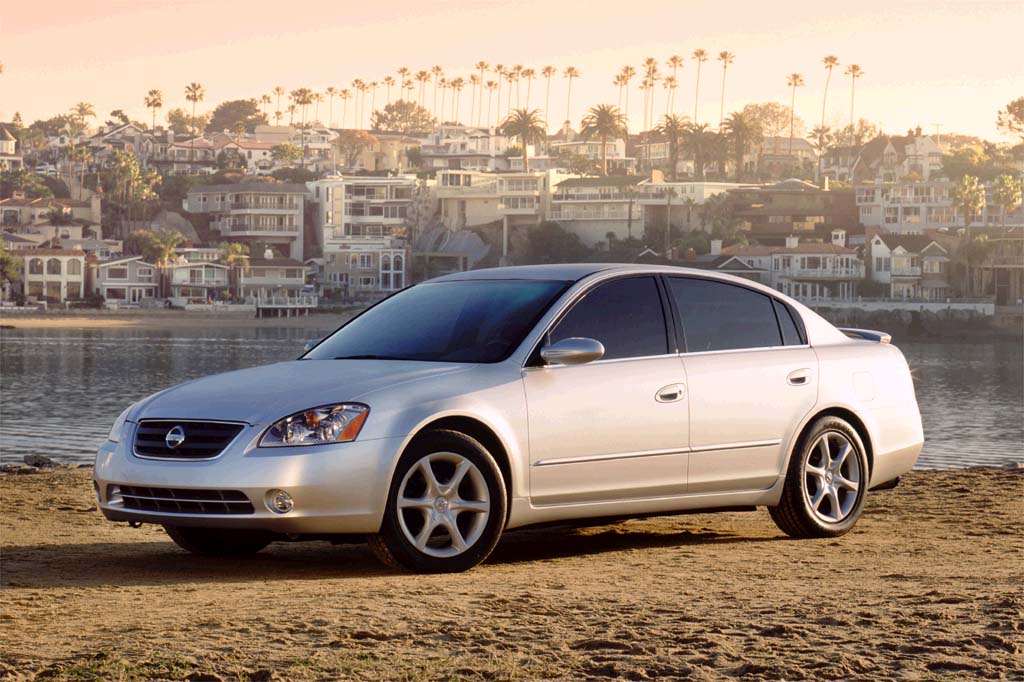 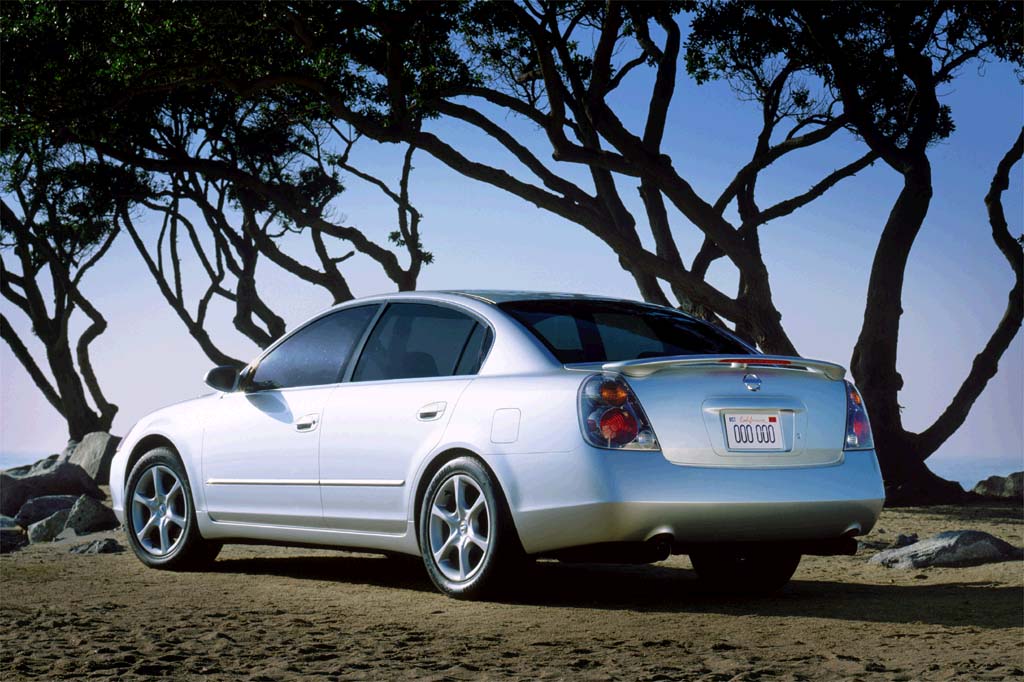 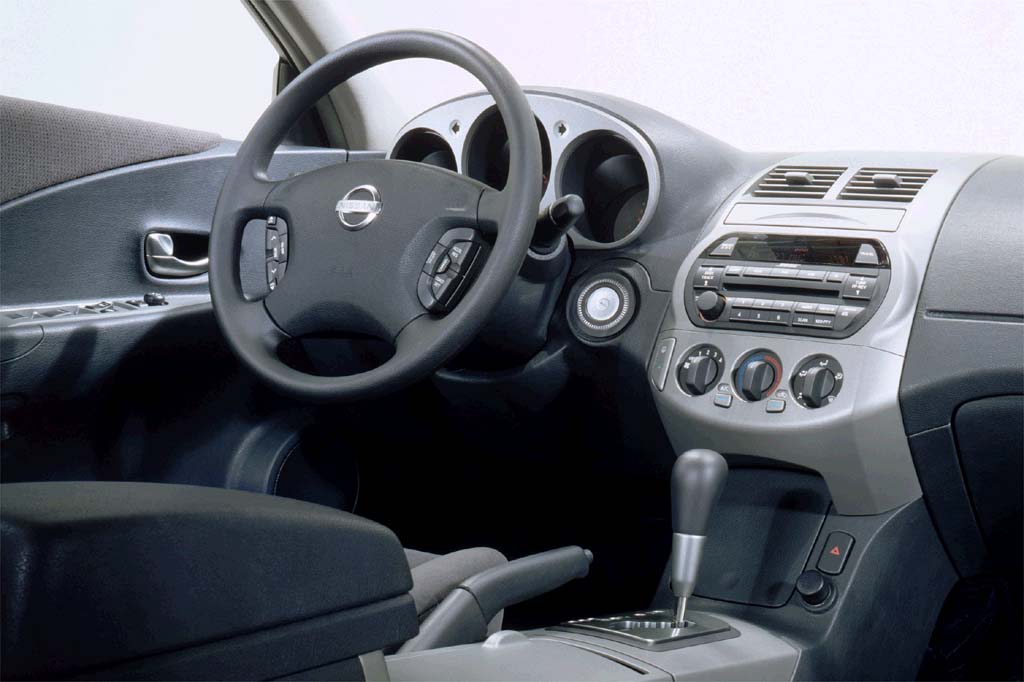 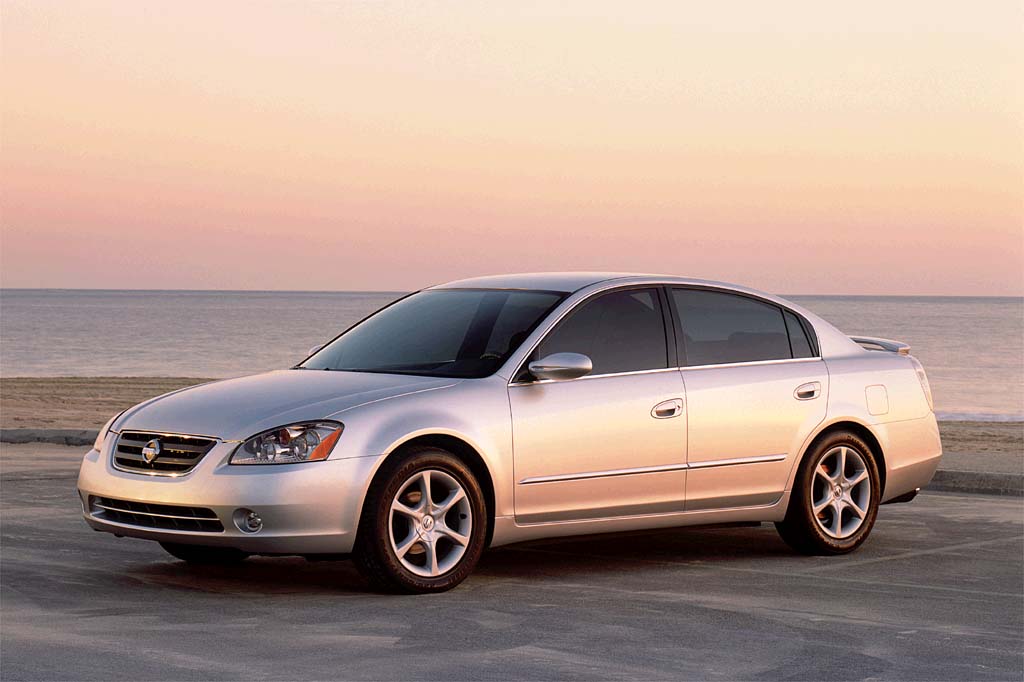 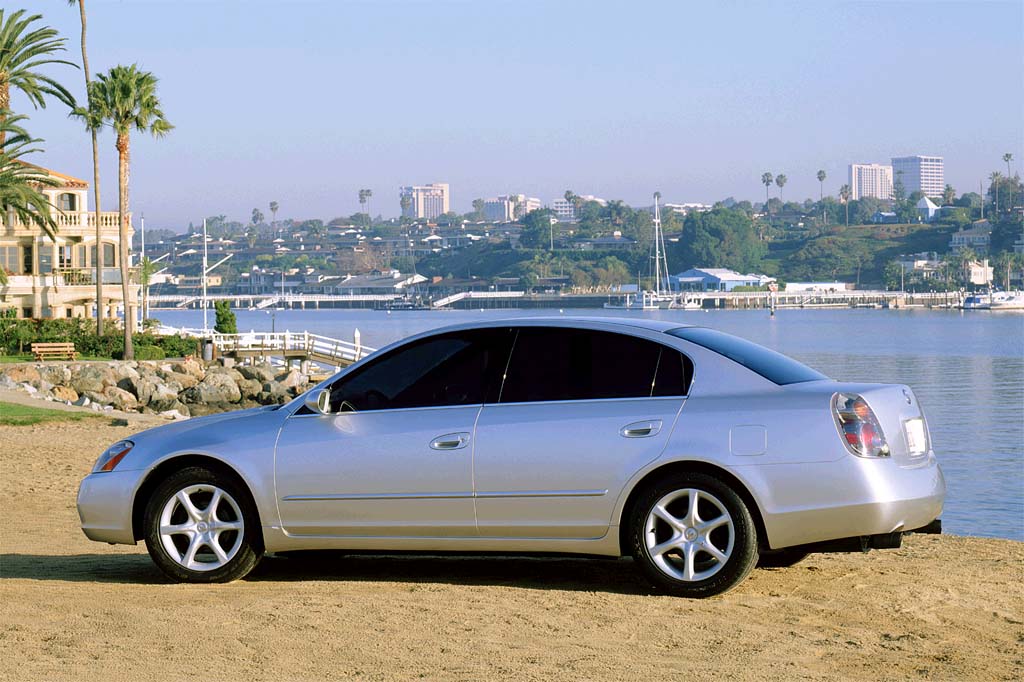 Nissan finally got a genuine Camry/Accord alternative in the moderately priced midsize class. Strong on features for the money, the Altima gained a spunky personality, especially in sporty 3.5 SE guise. Not as refined or well-built as a Camry, Accord or Passat, the latest Altima is nevertheless strongly recommended. Four-cylinder models satisfy most needs.

Redesigned for 2002, Nissan’s second-rung front-drive sedan turned out to be slightly larger than the “flagship” Maxima, swelling from compact to midsize dimensions. Wheelbase grew by 7 inches, and the new Altima measured 5.7 inches longer overall.

For the first time, a V6 engine was available. Exclusive to the top-of-the-line 3.5 SE, the new 3.5-liter V6 produced 240 horsepower. Base, 2.5 S and 2.5 SL sedans used a 2.5-liter four-cylinder engine that generated 175 horsepower (20 more than the prior model’s four-cylinder). All models were offered with either a manual or automatic transmission. When equipped with automatic, the 3.5 SE qualified for optional traction control.

Four-wheel disc brakes were standard. All except the base model could have optional antilock braking, which came bundled with front torso side-impact airbags and curtain-style airbags. Sixteen-Inch wheels were standard, but the 3.5 SE rode on 17-inch rubber.

An upgraded suspension and foglamps were included on the 3.5 SE. Xenon high intensity-discharge headlights were optional on the 3.5 SE sedan. Altima rivals included the Honda Accord, Toyota Camry, and Volkswagen Passat.

Nissan’s 2.5-liter four-cylinder engine developed 175 horsepower and 150 pounds-feet of torque. Installed only in the 3.5 SE, the 3.5-liter dual-overhead cam V6 produced 240 horsepower and 246 pounds-feet. Both engines were offered with either a five-speed manual gearbox or a four-speed automatic transmission. For 2005, an added SE-R model gets a 260-hp V6. Manual and optional automatic transmissions are offered, but V6 now use a 5-speed automatic vs. 4-cyl models’ 4-speed.

There’s a lot to like about the latest Altimas. Nissan forecasted that four-cylinder engines would account for 80 percent of Altima sales. Early tests put automatic transmission versions at 8.6 seconds for 0-60 mph acceleration. That’s competitive with rival four-cylinder Honda Accords and Volkswagen Passats, and slightly quicker than Toyota Camrys. But Altima’s four cylinder is unrefined compared to its rivals’, being buzzy and coarse in all but gentle cruising.

The robust V6 is as smooth and responsive as any competitor’s. Acceleration to 60 mph in 6.9 seconds, with automatic, places the 3.5 SE among the quickest midsize sedans.

EPA gas-mileage estimates are similar to those of Accord and Camry, which have less horsepower. A 2.5 S averaged 23.9 mpg in mostly highway driving. An SE with automatic got only 17.6 mpg including performance testing, but 24.9 mpg when traveling mainly on the highway. Altima’s 20-gallon fuel tank is the largest in the midsize class. Nissan recommends premium fuel for the V6.

A rigid structure and smart suspension design pay off in a comfortable, controlled ride. Four-cylinder models feel particularly absorbent over ruts and crests. More-aggressive tires firm up the 3.5 SE’s ride, but it’s not jarring.

Handling is good overall, despite overly sensitive straightline steering feel. Confident roadholding and good balance in turns help make the 3.5 SE crisper in all respects, thanks to its wider, lower-profile tires. On the other hand, a wide turning circle frustrates around-town driving and parking. Also, torque steer can make the 3.5 SE feel a little too spirited during brisk acceleration. Braking is strong, and easily modulated in ABS-equipped models.

An arching roof creates generous head room. Leg room also is good, as is seat comfort and bolstering. The driver gets height adjustment in all but base models. All Altimas have handy height-adjustable center armrests. Separate levers for steering-wheel tilt and telescoping adjustments is unorthodox, but provides greater-than-usual range of motion. Outward visibility is hampered slightly by a tall rear deck and by occasional reflections off light-colored dashboard tops.

Large, wide rear door openings ease entry/exit. Comfortable well-contoured seating offers plenty of knee and toe space. But head room for those over 5-feet-8 is constrained, and three-across adult seating is a squeeze. Two cupholders sit in the folding center armrest. Low-grade plastics inside, and a tinny clang of the trunklid, proved disappointing.

Altimas have a wide trunk with low liftover, but lid hinges dip into the cargo area. All models have a 60/40 split fold-down rear seatback for added versatility.