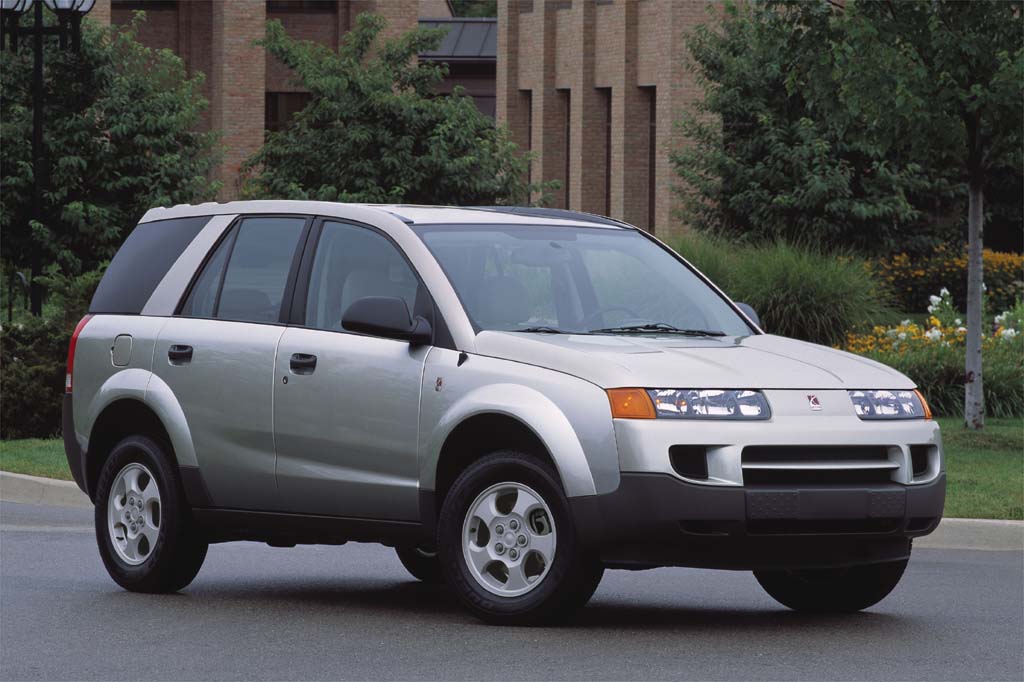 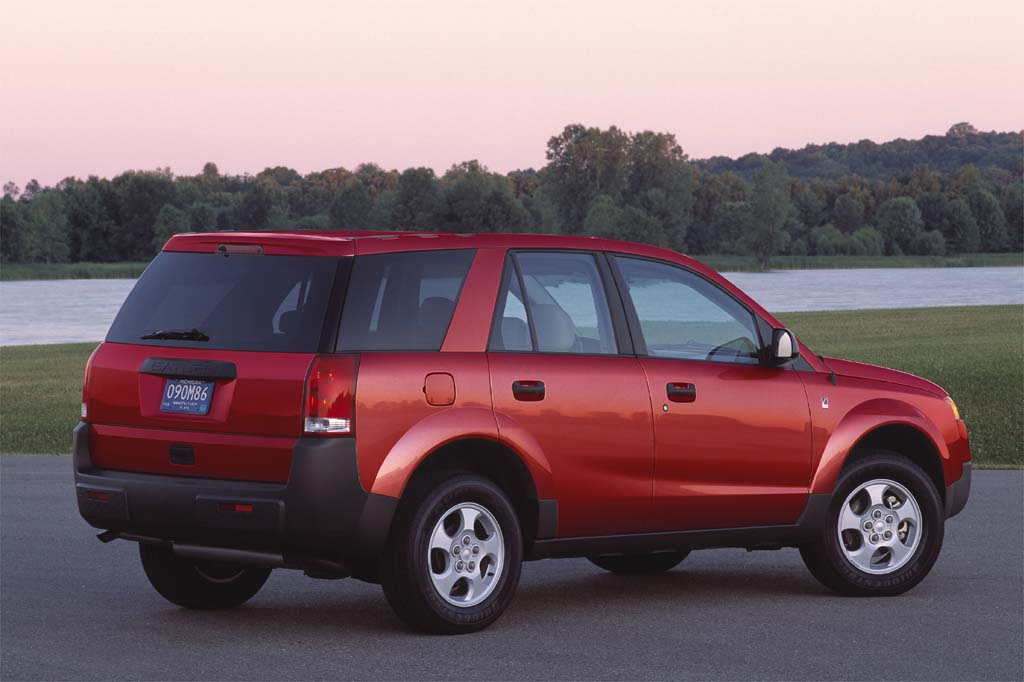 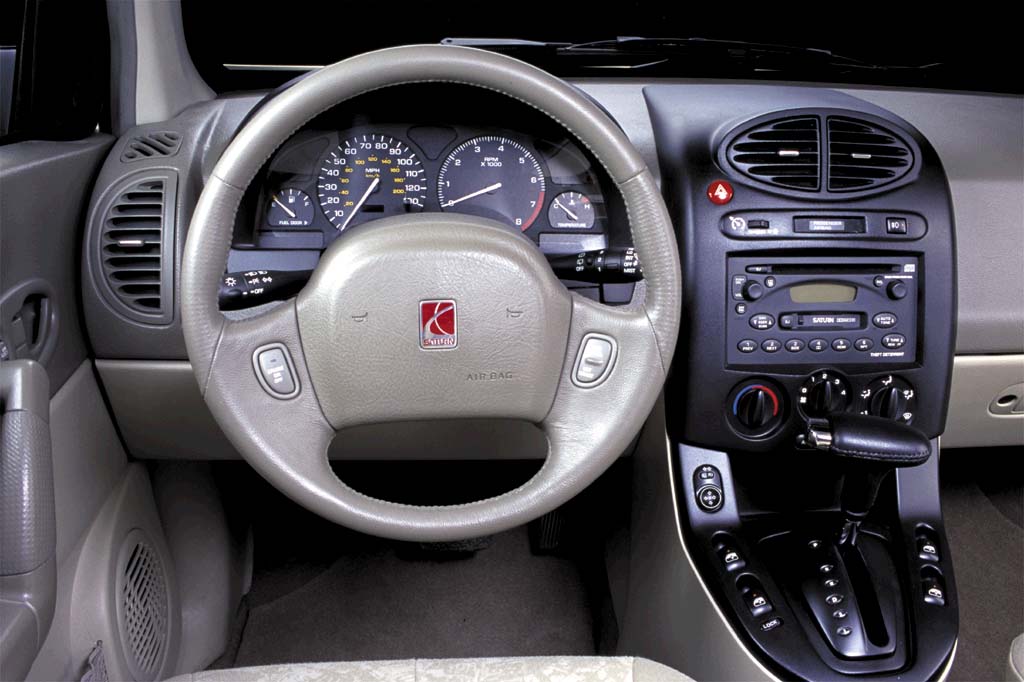 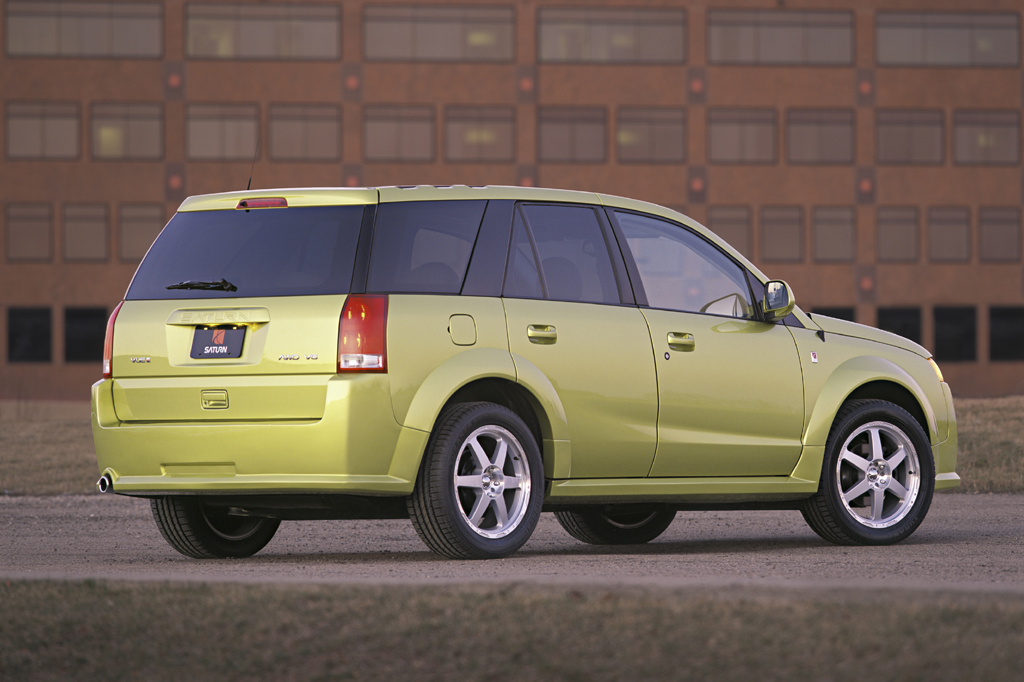 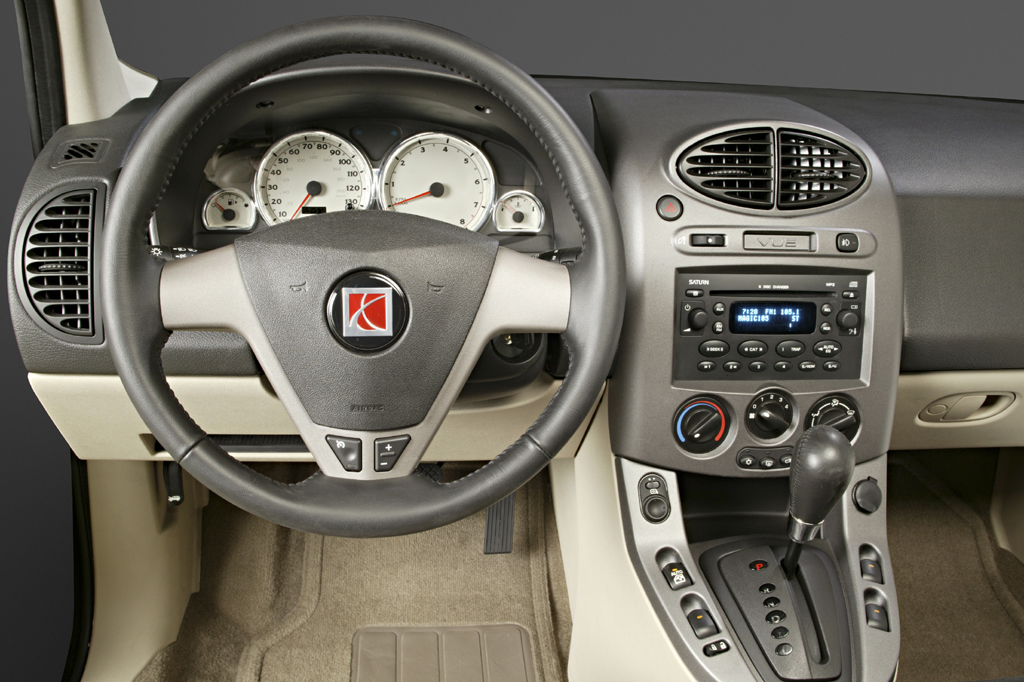 What Vue lacks in handling prowess and overall refinement, it makes up for in versatility, ride quality, and accommodations–plus outstanding performance from the latest V6 engine. Added attractions include dent-resistant body panels. Priced competitively when new, the Vue has subpar resale value, especially in two-wheel-drive form. That could mean comparative bargains for secondhand Vues.

Introduced midway through the 2002 model year, Saturn’s first SUV was positioned against compact sport-utility vehicles such as the Ford Escape, Honda CR-V, and Mazda Tribute. But Saturn’s version was slightly larger, with the longest wheelbase in its class.

Four-cylinder acceleration is on the mild side. Saturn said the four-cylinder Vue did 0-60 mph in 10.2 seconds with the CVT, and 11.1 with a manual transmission. Both are comparable to four-cylinder rivals. CVT models accelerate smoothly from a standstill, and deliver almost instantaneous passing power.

Saturn quoted a 8.4-second 0-60 time for the early V6, which placed it among the quickest compact SUVs. Its five-speed automatic might slur upshifts and downshifts, but doesn’t hunt between gears. The new 2004 V6 is smoother and more responsive, said to accelerate to 60 mph in less than 7 seconds.

Ride quality is satisfying. Tires and suspension do a good job of absorbing the worst bumps and expansion joints. Soft springing leads to mild side-to-side rocking, however.

In its initial form, Vue’s electric power steering is vague on-center, does not impart much road feel, and seems to supply varying degrees of assist at parking speeds. The 2004 version is better, but still short on road feel and linearity.

Because its suspension is tuned for ride comfort, a Vue leans more in corners than an Escape or CR-V, and tends to noseplow where most compact SUVs feel nimble. When fitted with 17-inch tires, the V6 model produces good grip. Stopping power feels adequate.

Vue continues the Saturn tradition of intrusive engine noise under rapid acceleration. In 2002-03 models, the four-cylinder is often quieter than the V6. The 2004 V6 engine yields a rich sound, however. Road rumble is rather pronounced, but freeway wind noise is low.

Clearly marked gauges fit into a logical dashboard layout, though climate controls are a bit small, and power-window switches are inconveniently arrayed on the center console. Some thin plastic materials impart a cost-cutting feel.

Even with the optional sunroof, you can expect good front leg and head room. Mounting the gearshift at the dashboard base provides valuable floor space for purses and the like. The chairlike buckets are very soft, and somewhat short on lateral bolstering. Some drivers might deem lumbar support to be insufficient.

Rear head space is ample, and leg room adequate, but seats are less supportive and less comfortable than in many rivals. The clever Vue design allows two child seats to remain in place, while one seatback section folds flat. No ceiling-mounted grab handles are included to ease entry/exit, but step-in height is very low.

Cargo space is a bonus because Vues have a longer load floor than most rivals. However, the liftgate lacks separate-opening glass and the rear seatbacks do not fold completely flat. Fold-flat front seat and standard pop-up cargo organizer are nice touches, though the organizer’s plastic walls are unsubstantial. Otherwise, interior storage is nothing special.