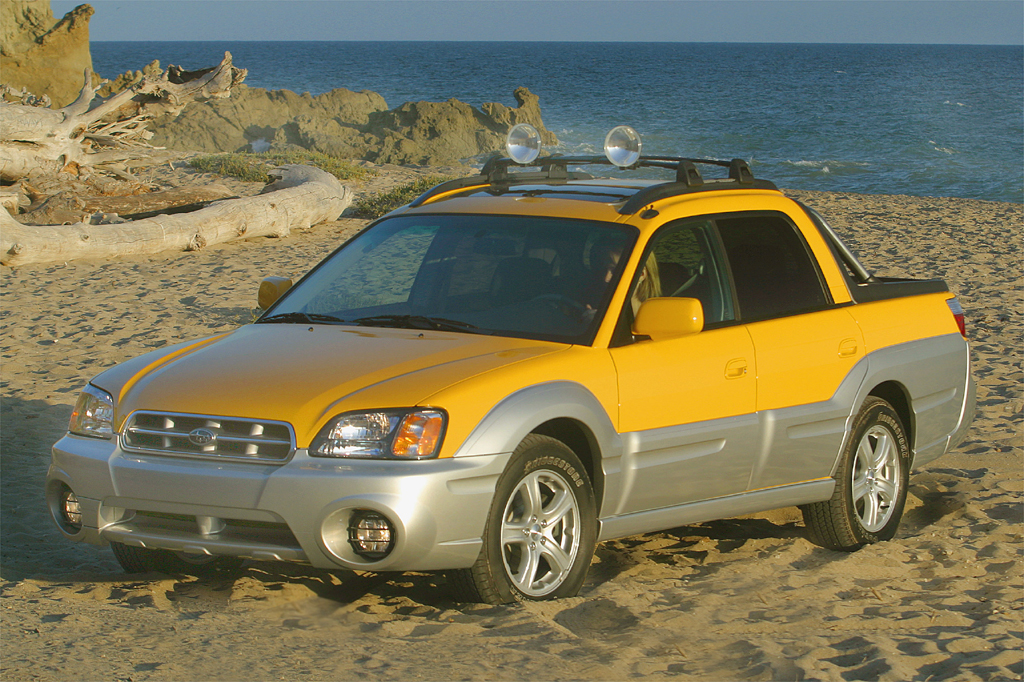 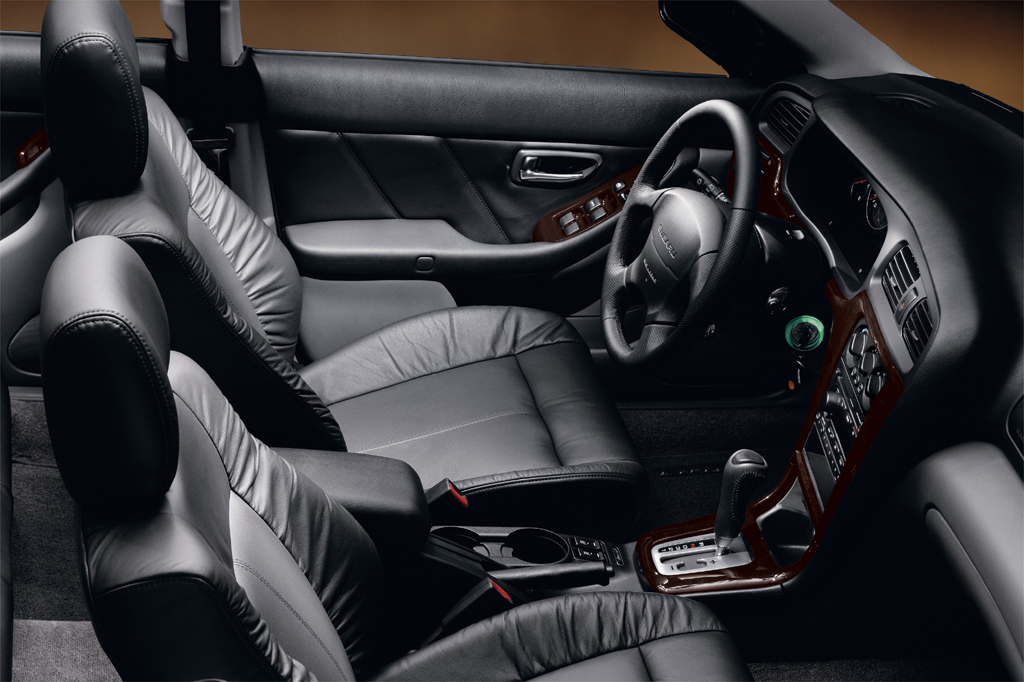 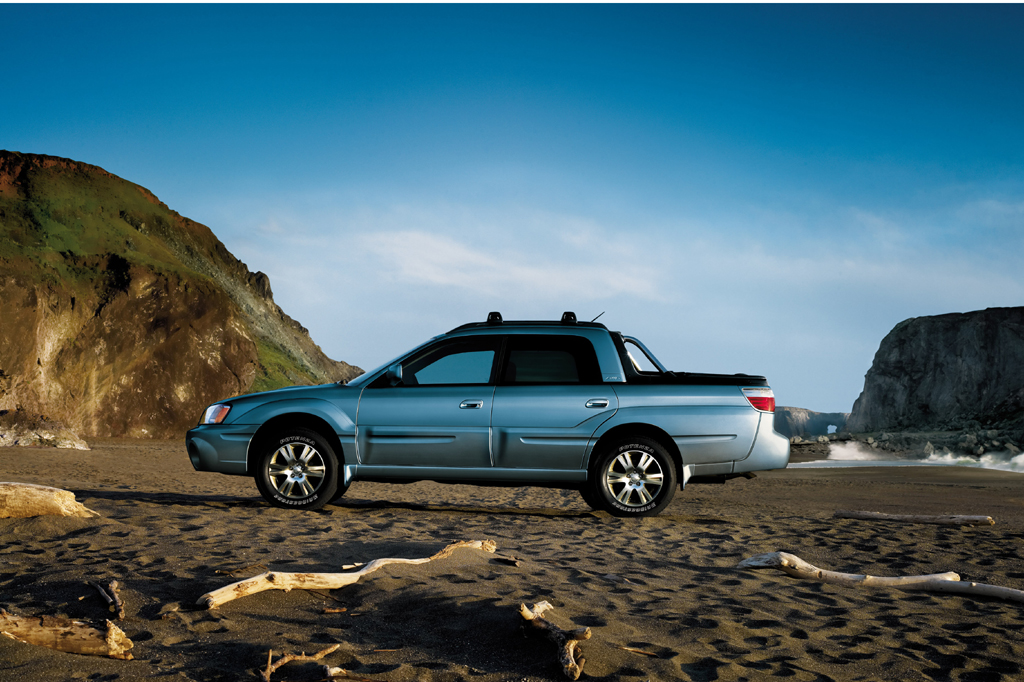 Baja lacks the utility of conventional compact pickups, but its versatility, features and carlike manners have appeal. So does the all-wheel drive, which provides SUV-like traction without excess bulk or fuel thirst. On the other hand, Baja is the sort of thing Barbie might drive–which might explain why more people didn’t take to it.

This compact 4-dr pickup bowed for 2003 as an adaptation of Subaru’s SUV-flavored Outback wagon. Baja had an open cargo bed at the rear instead of a roofed-in load space, seating for four instead of five, and heavy bodyside cladding designed to impart a more-rugged look. The wagon-to-pickup transformation also added 6 inches to overall length. Otherwise, Baja was basically a 4-cyl Outback wagon with the same all-wheel drive, high-riding suspension, and a 2.5-liter engine with horizontally opposed cylinders. The engine’s 165 hp was channeled through a 5-speed manual transmission or an optional 4-speed automatic with manual-shift capability.

Like Chevrolet’s big Avalanche, the Baja combined attributes of pickup truck and sport-utility wagon. But unlike most pickups, Baja used unibody construction instead of body-on-frame, so its cargo box was part of the main body structure and not bolted on. That bed was only 3.5-ft long, but an optional flip-out bed extender increased effective box length to 5 ft. For even longer cargo, a standard Switchback panel below the rear window could be opened to make a 3-ft by 1-ft pass-through in conjunction with a fold-down back seat. A bed liner was included, as was a roof rack.

Baja did not offer front side airbags or curtain side airbags. It did, however, come with antilock 4-wheel disc brakes, limited-slip differential, and 16-inch alloy wheels. Also standard were two-tone leather upholstery, unique interior trim, and 6-way power driver’s seat. Roof-mounted lights were available, as was a bed cover.

Despite a novel concept with no direct class competition, Baja drew few sales, a big disappointment for Subaru. Sales remained meager despite the addition of a Turbo model for 2004. Evidently, buyers either didn’t know what to make of Baja or didn’t much care for it, which means used examples will be few and far between.

No manual-transmission Bajas have been made available for test so far. With automatic, the 165-hp non-turbo models feel sluggish, doing 0-60 mph in about 10.5 sec. The Turbos feel much stronger off the line and in highway passing, as 0-60 mph takes about 9 seconds, but they suffer some turbo lag in power delivery. With either engine, the automatic transmission is a bit slow to kick down for passing, though the manual-shift feature can help compensate. Fuel economy is nothing special even among compact SUVs. In city/highway driving with automatic transmission, a test Turbo averaged 18.0 mpg, a test Sport 21.0. Subaru recommends premium-grade fuel for the turbo engine. In all, Baja performs much like the parent Outback wagon, as you’d expect.

The same applies to road manners. Like the Outback, Baja furnishes a more-controlled ride than most SUVs, even car-based crossovers. It’s less smooth than some compact cars, but sails comfortably over most bumps and dips. Handling is also quite carlike and far more assured than the SUV norm, though cornering lean is noticed on the elevated suspension. The standard all-wheel drive reassures on slick roads, but it’s not designed for severe off-roading and it doesn’t cope with all hazards. Indeed, we saw a Baja get stuck in California beach sand during the press introduction. Brakes don’t feel particularly strong, but provide drama-free stops.

Baja is quieter than the typical crew-cab pickup, but only average by car standards. Subaru’s flat-four engines are a bit gruff and throbby compared to most inline 4-cyl units, but are tolerably quiet except near maximum rpm. Coarse-pavement tire drone is audible but not irksome, and wind rush is modest, though crosswinds created an annoying whistle in one test Baja.

The four-seat interior provides decent six-footer room in front, but just adequate space in back. Front seats are comfortable but could use longer tracks, though that would eat into rear leg space that isn’t generous to begin with. A standard tilt steering wheel helps drivers get comfortable, but some controls are small or hard to find, and the roof styling impedes visibility to the right-rear. The back window is fixed, by the way. Too bad it doesn’t lower for ventilation. Workmanship passes muster for the class, but materials are only average in quality, even in the leather-trimmed Turbo versions.

Most hard-core pickup owners wouldn’t consider a Baja, but it’s useful for hauling sports gear and other small, light cargo. A larger pass-through panel would help with long items, however. Cabin storage is good, but unexceptional.